After Putin announced mandatory military service, demonstrators called the mobilization a “burialization” — and more than 1,000 were arrested in cities across Russia. 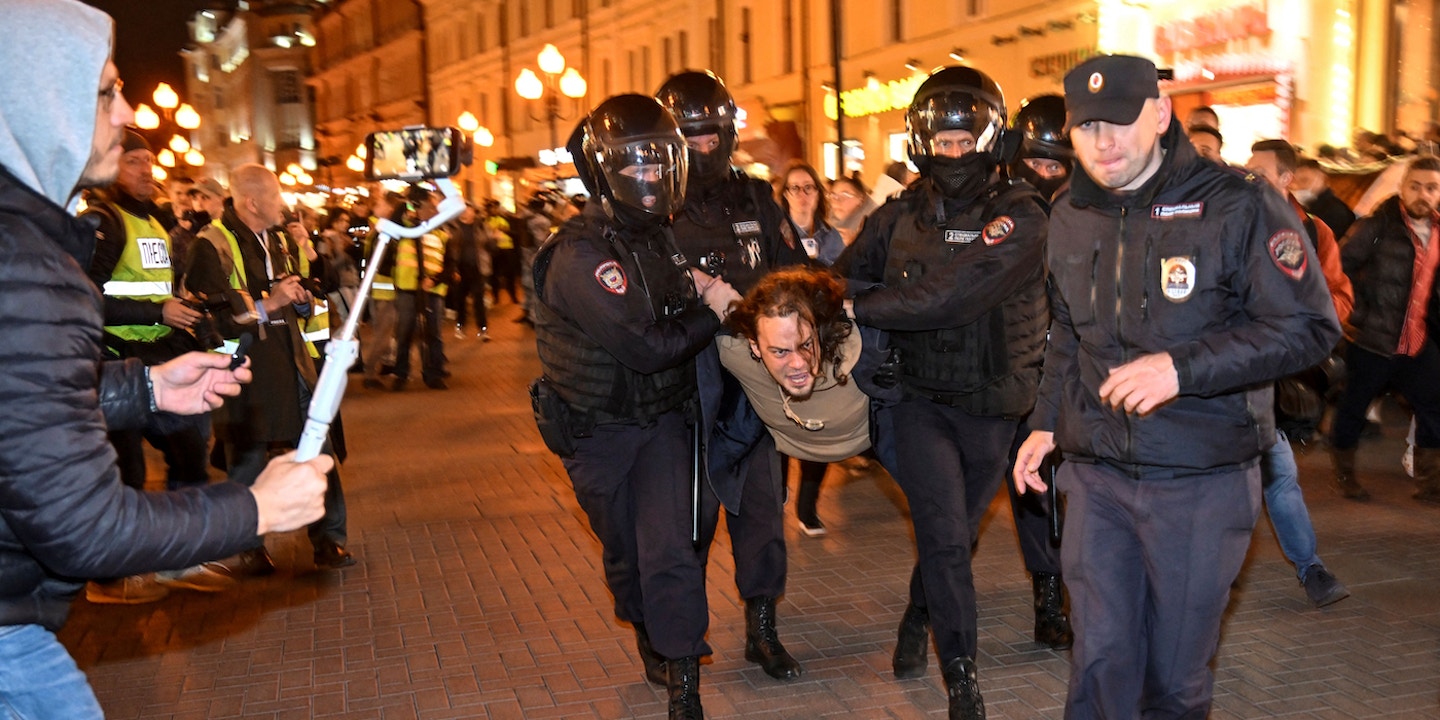 More than 1,000 antiwar protesters were arrested in Russia on Wednesday, following President Vladimir Putin’s decision to force up to 300,000 reservists back into military service as his war on Ukraine falters.

In a recorded address, Putin described the move as a “partial mobilization” of Russian citizens with some prior military training, but, as the Russian exile news site Meduza reported, a new law enacted this week appears to give the president the right to call for a wider, general mobilization. Most Russian men of military age are legally considered reservists following a mandatory year of military service in their youth.

At least 1,386 protesters were arrested at demonstrations across the country, according to OVD-Info, a human rights group that monitors political persecution in Russia.

There were more than 500 arrests in both St. Petersburg and Moscow, where protesters chanted “No to war,” “Send Putin to the trenches,” and “Russia without Putin.”

Some protesters also used a play on words to refer to the mobilization — known in Russian as “mobilizatsiya” — as “mogilizatsiya,” an invented word that means something close to “burialization.” A protester in Moscow opposed to the mobilization of Russian reservists announced on Sept. 21, 2022, held up a handmade sign that read “No burialization.”

Although the arrests were not featured on tightly controlled state television news broadcasts, video of protesters being dragged away by the police quickly filled Russian social media channels.

In #Moscow, #Russia, the police are detaining protesters against the mobilisation at an unauthorised #protest rally taking place tonight. The protester who is being detained is chanting “No to War!”.

Many of those images showed casual brutality inflicted on the demonstrators by the police, including a clip recorded by someone sitting inside a bakery on the Old Arbat, a pedestrian street in central Moscow, as officers repeatedly bashed a young man’s head into a window directly in front of them.

A quiet dinner in Moscow pic.twitter.com/AmN1pVetCR

While many Russian dissidents in exile saluted the courage of the protesters, who risked lengthy prison terms to voice their dissent, some Ukrainians accused Russian protesters of being too passive, or failing to take to the streets until Putin’s mobilization order put them or their loved ones in imminent danger of being forced to join the assault on Ukraine that began in February.

So forgive my remaining very much unimpressed by today's "No war" chantings after they got mobilization.

People are protesting in Moscow. (Other cities, too). They are traditionally grabbed one by one and showed into police vans.

Until Russians begin to fight for their own and resist instead of filming arrests and making selfies, they will be slaves. Their protest will be pointless pic.twitter.com/yibyfus1pZ

But, as OVD-Info reported last month, there were at least 16,437 arrests related to antiwar protests in Russia between February and August. Ahead of Wednesday’s protests, the prosecutor’s office in Moscow warned the public that anyone taking part in or encouraging protests could be punished with 15 years in prison.

In addition to risking arrest, many young Russian men who attended the protests also faced the prospect of being immediately pressed into military service by the authorities. Mediazona, a reader-supported news site focused on the Russian court system and prisons, reported that at least three of the men arrested for protesting in Moscow were handed summonses ordering them to report to enlistment offices.

There were also signs, however, that Russia’s criminal justice system was overwhelmed by the mass arrests. Video provided to OVD-Info by one detainee in St. Petersburg showed that dozens of protesters who were forced to wait all night at a police station passed the time by filming each other as one played the piano.

In the southern city of Krasnodar, near Ukraine, a police bus carrying at least 14 detainees broke down before reaching the station.

In the Russian city of Krasnodar a police van packed with anti-mobilisation protesters broke down this evening pic.twitter.com/EV2HX1aFuH

Francis Scarr, who monitors Russian television for the BBC, reported that among those arrested was a street musician in the city of Izhevsk who entertained protesters with a rendition of a sardonic Siberian punk song from the last days of the Soviet Union, “Everything Is Going According to Plan.”

The one being sung in this video is the highly ironic (and very apt) "Everything is going to plan" by Yegor Letov pic.twitter.com/DynDWjLpdg