For many on the left, the phrase used by DeSantis — “regime media” — would have been new, but it’s a buzzword on the far right.

On Tuesday, Republican Florida Gov. Ron DeSantis told a right-wing journalist that “regime media” in the United States had “wanted to see Tampa” devastated by Hurricane Ian “because they thought that would be worse for Florida.” A clip of the conspiratorial comments quickly went viral — largely because many of DeSantis’s critics on the left had no idea what he was talking about. The detractors were shocked at the offhand comparison of American news organizations outside the conservative media ecosystem to state-run propaganda outlets.

DeSantis had been asked by Brendon Leslie, the founder of a conservative news site — and a Republican activist who told local news on January 6, 2021, that he was following President Donald Trump’s orders when he stormed the U.S. Capitol — if the media was at fault for storm forecasts that had stressed the danger to the city of Tampa instead of other areas that were badly hit.

“They don’t care about the people of this state… they want to use destruction from storms as a way to advance their agenda” pic.twitter.com/IErBHfwkuJ

Instead of blaming the weather forecasters, the governor pivoted to his claim that national news organizations had been rooting for maximum destruction from the storm because they hoped to “use it to pursue their political agenda.” DeSantis left unsaid which news organizations he was talking about, and what they hoped to gain politically by seeing Tampa devastated — but the governor’s words seemed to make perfect sense to Leslie, who nodded along.

That’s probably because Leslie, like DeSantis, is fluent in the language of the far-right media ecosystem. In fact, Leslie seems to draw no contradiction between reporting on Republican political candidates and also campaigning for them. In March, he organized a far-right rally featuring Rep. Marjorie Taylor Greene, R-Ga. In August, Leslie spoke at the Conservative Political Action Conference.

On Tuesday, when Leslie interviewed the governor, he was wearing a T-shirt with the logo of the Three Percenters, a far-right militia group. DeSantis, who does much of his campaigning on Fox News, had good reason to believe that he was speaking to someone with an audience steeped in the right-wing media trope that treats the Biden administration as akin to a dictatorship.

Fox News seems to have played a role in mainstreaming the language DeSantis used on Tuesday. On the cable channel, the Biden administration is regularly referred to as a repressive “regime.” A screenshot from an October 2021 broadcast of “Tucker Carlson Tonight.”

In recent months one of the channel’s most prominent hosts, Laura Ingraham, has repeatedly cast reports that are unflattering to Republicans — from CNN, ABC, CBS, NBC, MSNBC, the Washington Post, the New York Times, USA Today, Vox, the Daily Beast, and Politico — as the work of “regime media.”

In fact, in her opening monologue on Monday night — hours before DeSantis was interviewed by Leslie — Ingraham had claimed that reporters from “regime media” outlets who asked questions about Florida’s response to the storm were “working overtime to cast aspersions and sow distrust” and “rooting now against Florida’s governor in a time of crisis.”

As Ingraham spoke, a graphic behind her displayed the logos of the nonpartisan news organizations, and the headline in the lower third of the screen read: “Media Desperate to Make This DeSantis’ Katrina.” 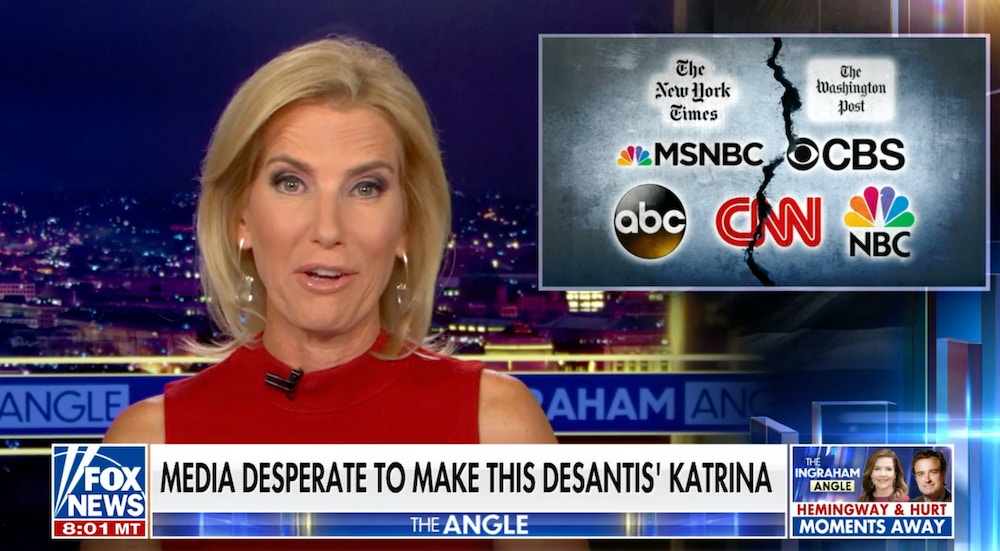 A screenshot of Laura Ingraham’s opening monologue on her Fox News show “The Ingraham Angle” on Oct. 3, 2022.

Close observers of Fox News, which is clearly partisan and operates as a de facto arm of the Republican Party, and was in lockstep with the White House during the Trump administration, might see some irony in one of its hosts claiming that news organizations which aim to be nonpartisan are the ones acting like state-controlled media in autocracies like Russia or Syria.

While it seems likely that DeSantis, who has appeared on Fox dozens of times this year, was channeling Ingraham when he railed against the supposed “regime media” plot to make him look bad, the governor has been referring to the Biden administration as a totalitarian regime supported by media lackeys for more than a year.

“When you stand up for the right things, they will attack you,” DeSantis told Republicans in Nebraska in September 2021. “The left will come after you. The regime-controlled media will smear you.”

The following month, the governor suggested that federal officials were trying to intimidate Florida parents who objected to masks mandates in schools during the coronavirus pandemic. “As we continue to see the use of fear and intimidation to suppress opposition to the regime, we’re going to find new ways to be able to empower parents’ rights to decide what is best for their children,” DeSantis said.

When he announced that he would be “a candidate for reelection as governor of the free state of Florida,” last November, DeSantis listed among his accomplishments that he had “stood up to the Biden regime.” The same week, he appeared on “Fox and Friends” to denounce “the Biden regime failures from Afghanistan to the southern border.”

This August, when Mar-a-Lago was searched by federal agents to seize classified documents illegally taken from the White House by Trump, DeSantis called it “another escalation in the weaponization of federal agencies against the Regime’s political opponents.”

While many Americans who do not spend their time immersed in the right-wing media echo chamber might be surprised that this term is so commonly used to describe a democratically elected federal government in Washington, the effort to discredit all non-conservative media outlets as filled with undercover left-wing operatives is of course not new.

Eight years later, Donald Trump went a step further by referring to any criticism of him or his administration as “fake news,” and calling reporters unwilling to accept his lies as truth “the enemy of the people.”

Over the past year, Republican politicians like DeSantis — who recently headlined campaign events for Republican candidates that effectively barred any journalists who were not willing to allow their reporting to be used in campaign commercials — have increasingly embraced the far more extreme claim that reporters who ask uncomfortable questions are “regime media.”