Disinformation about the election’s outcome is desired by Fox’s viewers, not forced upon them. 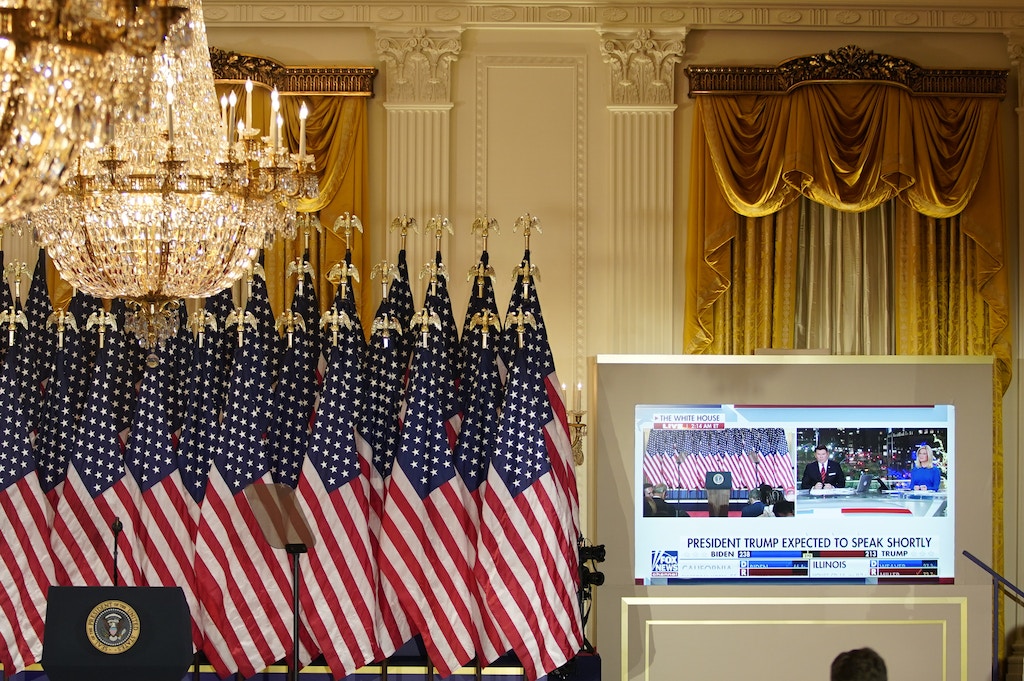 Fox News election night coverage is displayed on a monitor during a party in the East Room of the White House in Washington, D.C., on Nov. 4, 2020.

At Fox News, a funny thing happened on the road to redemption.

As Donald Trump fell behind in the presidential vote count, Fox began pivoting away from the reality TV star it had backed for so many years. There was an early announcement by Fox that Arizona had been won by Joe Biden. There was a reporter calling Trump’s fraud claims “just not true.” And there was an abrupt silencing of Press Secretary Kayleigh McEnany by anchor Neil Cavuto. This seemed to be evidence that Fox and the Murdoch family, which owns the network, were finally turning on Trump with a weapon they had rarely aimed at him: truthfulness.

But then, like the scorpion that stings the frog in the middle of a stream, Fox did what it had always done by nature. Its primetime hosts made a frantic assault against the math of ballot counting, arguing against all evidence that Trump was right, the voting was rife with fraud, and Biden and antifa were stealing the election. The false allegations came night after night from a who’s who of delusional thinking, led by Sean Hannity and including Tucker Carlson, Laura Ingraham, Jeanine Pirro, Jesse Watters, and Mark Levin. The network loved it, putting up a promotional spot that highlighted their fabulism.

What was going on? Fox’s split-screen approach, which consists of bouts of honesty during its less-influential daytime hours and nonstop falsehoods during its primetime programs, is actually kind of ingenious. It allows the network to wear a fig leaf of honesty in front of people living in the real world, while continuing to throw insane chum into the billion-dollar market for delusions. Nobody is entirely happy (there have been protest chants of “Fox News sucks”), but the network’s ratings remain strong.

Much of the discussion around misinformation has focused on the supply coming from Fox News, Facebook, and Twitter. But the latest convolutions speak to the demand side of the market. Thanks in large part to the decades Fox has devoted to inciting and expanding an audience for right-wing content, a lucrative market has been brought into existence. Fox’s disinformation is desired by its viewers, not forced upon them. In fact, while Fox is contaminating its daytime programming with dollops of truth, smaller TV outlets that are fiercely pro-Trump at all times, such as Newsmax and One America News, are seeing remarkable gains. This appetite for political fantasies was noted by Al Schmidt, a city commissioner in Philadelphia who forcefully denied unfounded claims that ballots had been cast in the name of dead voters. As the Republican told CNN, “One thing I can’t comprehend is how hungry people are to consume lies and to consume information that is not true.”

Yochai Benkler, the lead author of an excellent book on disinformation “Network Propaganda,” has devoted much of his life to studying the internet and communication. In an interview, he noted that “the market structure of this niche of the outrage industry really does discipline the outlets.” He pointed out that the most prominent conservative publication that turned on Trump in recent years — the Weekly Standard — was abruptly closed in 2018. When there’s a choice between being truthful and being profitable, it’s an easy call for right-wing media executives. “To be surprised that business puts profits ahead of ethics is to miss the fundamental spring mechanism of capitalism,” Benkler said.

Fox’s disinformation is desired by its viewers, not forced upon them.

But this isn’t just a matter of future revenue for Fox and the Murdochs. The primetime fraud clamor has the effect of creating a false narrative that will likely deform the U.S. political system for years ahead. About half of Republicans in a new Reuters/Ipsos poll believe that Trump “rightfully won” the election, and according to a Politico poll, 70 percent of Republicans do not believe the election was free or fair — even though, it bears repeating, there is no evidence of widespread voter fraud, and nearly every day another court in the nation tosses out another unfounded lawsuit from the Trump campaign. Of course, the campaign’s tweets and statements reach an audience without amplification by Fox News, but the amplification is crucial oxygen that gives vigorous life to the delusions.

What this means, once Biden is inaugurated in January, is that a bitter portion of the electorate will likely regard his presidency as illegitimate — a presidency of stolen votes. It takes little imagination to envision four years of far-right kneecapping of Biden based on this fraudulent narrative of fraud. It would be a new form of birtherism but more virulent and durable because Fox has seeded it so deeply and widely — and seems intent to continue doing so. Even if Trump shambles off to a post-presidential bog of legal jeopardy and incoherent tweets, the Republican Party will have the weapon it needs to inflict the damage it wants.

In the end, as journalism professor Bill Grueskin has noted, it boils down to the toxic choices of Rupert Murdoch and his heirs. Fox News is owned and controlled by the Murdoch family, which is presided over by its 89-year-old patriarch, Rupert, who founded the network in 1996. His oldest son, Lachlan, is now the chief executive of Fox’s parent company. Rupert’s five other children — Prudence, Elisabeth, James, Chloe, and Grace — hold ownership shares of the family’s assets but do not currently have any active management responsibilities. The Murdoch family is collectively worth about $17 billion.

It’s somewhat understandable why Hannity would shout about election fraud even though he must know the charges are bogus. His ratings depend on providing the false narratives that his viewers demand; if his audience shrinks, he could lose his show and the clamor he clearly adores. The out-of-the-spotlight Murdoch family does not have that excuse, because their financial situation and their day-to-day lives would not be affected by a ratings decline. They could fire Hannity and Carlson and still be assured of possessing enough money to acquire luxury yachts and country estates for generations of their spawn.

What explains the choices of Fox’s owners? The mechanisms of capitalism are recalibrated when the law or the markets demand it. The Murdochs have built a machine that’s operating as designed — the markets are rewarding them with billions of dollars a year while the First Amendment is shielding them from liability for the damage they cause. The Murdochs are capitalists, Benkler observed, not ethicists. “They are sitting on this incendiary device that is burning down the house,” he said, “but they are not the first or the last willing to make money off destroying lives.”