As Trump Is Defeated, the Murdochs Try to Dodge Backlash for Fox News

The Murdoch family, owners of Fox News, oversaw a pivot against President Trump as his defeat loomed. 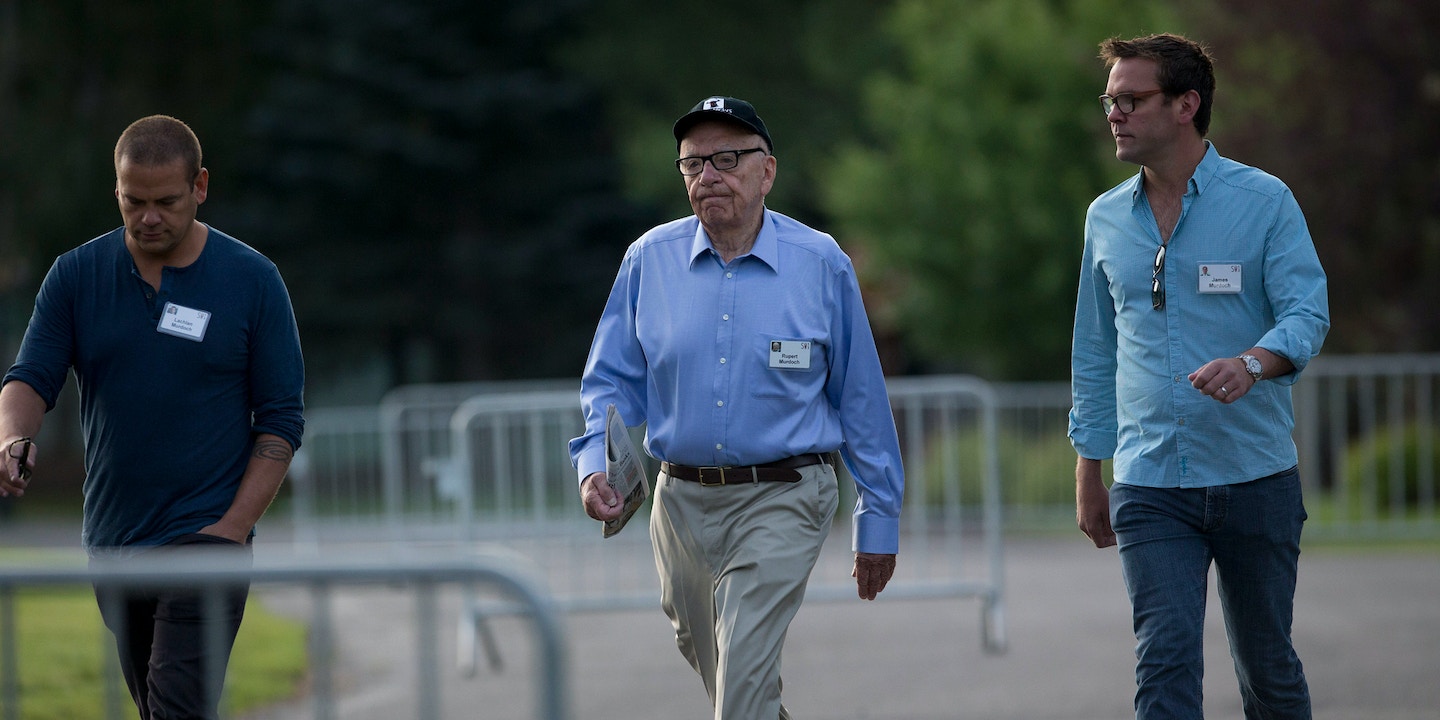 A behind-the-scenes struggle that could determine the extent of post-election violence in America is breaking into the open, but it’s not at the White House or inside the GOP. It is within the billionaire Murdoch family, the owners of Fox News.

On Friday morning, a day before Joe Biden was declared president-elect, one of Rupert Murdoch’s daughters-in-law, Kathryn Murdoch, tweeted out an unprecedented criticism of Fox News and the family’s handling of the network as President Donald Trump was heading for defeat. Responding to CNN anchor Jake Tapper saying that it was time for Fox and the Murdochs to make clear that there was no credible evidence of election fraud, Kathryn Murdoch tweeted, “I agree with this.”

I agree with this. https://t.co/VgmYiJ0hPU

Her sentiments appeared to have support within the family, because their media holdings — not just Fox News — began sending out clear signals to President Trump that he should accept defeat. On Friday evening, the Wall Street Journal’s editorial page skeptically noted that the Trump campaign “will have to prove” its baseless claims of election fraud, and advised the president to be ready to “concede gracefully.” The article’s headline was “The Presidential Endgame.” On Fox News last night, primetime host Laura Ingraham, a guest at the White House just a few days ago, said the president should exhibit “grace and composure” when the moment comes to admit defeat, which she seemed to feel was coming soon. A graphic displayed during her show stated that one of the three tasks ahead is to “Accept the Results of the Election.” Finally, the front-page headline of Saturday morning’s New York Post seemed to mark a clear turn from the Trump era, blaring out, “Ready, Set… Joe?”

The Murdoch family, presided over by 89-year-old patriarch Rupert Murdoch, owns Fox News and a constellation of other media properties in the United States and across the world; the family is the inspiration for the HBO series “Succession.” The political bent of Fox News and other media outlets reflects the right-wing orientation of Rupert and his eldest son Lachlan, who now oversees the network as chief executive of its parent company, Fox Corporation. But the family’s ownership of its media properties is a 50-50 split between Rupert on one side and his six children on the other. The key progeny, when it comes to running the empire, have nearly always been the conservative Lachlan and his younger brother James, who is a centrist.

Kathryn Murdoch is James’s wife. In recent years, she and James have not hidden their political preferences: They made significant donations to the campaigns of Pete Buttigieg and later, Joe Biden, once he became the Democratic Party nominee. Earlier this year, after James lost a succession battle to Lachlan and resigned from his last remaining board position, he issued an oblique criticism of the political direction of the family’s holdings, but he did not say anything specific about Fox News and its central role in laundering white nationalist extremism and its related conspiracy theories.

With Trump’s defeat, the network and the family are at a crossroads, facing far more critical scrutiny and pressure than they ever have in the United States. Fox is in the position, at this moment, of state broadcasters in unstable countries where an unpopular leader has been voted out of power but refuses to accept the result. Will the broadcaster be loyal to the defeated leader and claim that the election was rigged — a path that will probably not be successful but would nearly guarantee a higher level of post-election instability? Or does the broadcaster take the journalistically and morally correct path of reporting the fact that the president really did lose an election that was not rigged against him? In the 24 hours leading up to Biden surpassing 270 Electoral College votes on Saturday, the Murdoch properties showed added evidence of taking the latter path.

It is useful to step back for a moment and realize the deformity of this moment. Due to the unique power of Fox News — alongside Facebook, it is the most prominent platform in the U.S. for spreading right-wing disinformation — a single family with a net worth of approximately $17 billion is positioned to decide whether election conspiracy theories will have the media oxygen they need to spread widely and deeply across the country. It is a concentration of power that has been amassed and abused for decades by the Murdoch family, and has caused immense damage in the U.S. and other countries too (the Murdochs are responsible for similar harm in the U.K. and Australia, where they also have significant media holdings). Dozens of protesters converged at Fox News headquarters, as the corporation held an “emergency” meeting to court nervous brands to continue advertising on the network, on March 13, 2019.

As election results came in and showed Trump on a trajectory to defeat, Fox’s coverage became notably split earlier this week. The so-called news side of Fox, which is anchored in its daytime programming with conservative but not delusional journalists like Chris Wallace and Bret Baier, has done a generally straight-up job of reporting the results. Fox’s data team is still the only cable network to have called Arizona for Biden, a move that infuriated the White House and was apparently a factor that led a crowd of pro-Trump protesters outside a ballot-counting office in Phoenix to chant “Fox News sucks.”

In a reflection of what would seem to be early evidence of a Murdoch inclination to take their media properties in a pragmatic direction, the New York Post, which was one of Rupert Murdoch’s first media acquisitions in the United States and has been consistently right-wing under his decades of ownership, published two articles on Thursday that were sharply critical of Trump’s fraud claims, including a story that was headlined, “Downcast Trump makes baseless election fraud claims in White House address.”

But the primetime hosts at Fox News, especially Sean Hannity, who also functions as a nonofficial adviser to Trump, did not move as quickly to change their pro-Trump cheerleading. Thursday night’s episode of Hannity’s show was particularly egregious, with such guests as Texas Sen. Ted Cruz and former House Speaker Newt Gingrich angrily repeating the Trump campaign’s evidence-free assertions of election fraud. It was 60 minutes of nationwide conspiracy dissemination, a brutal demonstration of Fox’s power to superspread a political virus in America. While Ingraham altered her position on Friday night, Hannity did not modulate his they’re-stealing-the-election tune.

And this has led to unusually direct scrutiny of the Murdoch family, whose name has not usually been mentioned in the many years and fountains of media criticism of their network. In addition to Tapper’s monologue, CNN’s Brian Stelter put his finger on the Murdochs after news broke that a memo circulated at Fox News on Friday instructed on-air talent to not refer to Biden as president-elect once he amassed enough Electoral College votes to win (Fox denied the CNN report). “The Murdochs are ultimately responsible,” Stelter said. “Rupert and Lachlan Murdoch are responsible for what is on this network in the coming hours.” On Saturday morning, as Fox’s pivot became more apparent but hardly complete, Stelter pointed to Ingraham’s shift and Hannity’s intransigence, saying there is a “giant tug of war” at Fox right now.

Kathryn Murdoch is the only family member to have spoken out since the election. The Murdoch family holds its intramural activity fairly close, but her tweet, endorsing a call for the family to put country before profit, touches on what might be the family’s main concern: money. While Rupert and Lachlan have strong conservative political beliefs, the Fox proposition has always been a business one — the family has reaped billions from the network. In the U.K. in 1997, the Murdoch media holdings shifted their support to then-Labour Party leader Tony Blair, not for ideological reasons but business ones. Now, Kathryn Murdoch, in calling for the network to report honestly about election-fraud conspiracy theories in the U.S., seems to be acknowledging that it would not be a revenue-enhancing position. Many of Fox News’s pro-Trump viewers would be incensed, and a loss of viewers could ultimately affect the network’s crucial revenue stream: cable fees.

The question could be asked: After decades of running Fox News as an irresponsible right-wing propaganda machine, why change now, why speak out now, after all that’s been done by the network and supported by the family? The answer might be that the Murdoch family’s run of remarkable impunity could really be over as there is now greater scrutiny of what they’re responsible for. Kathryn Murdoch had a little-noticed Election Day tweet that hinted at her reputational concerns. “What will you tell your children or your future self about the part you played in history?” she asked. And after Biden was declared president-elect on Saturday, she tried to publicly implant herself even more firmly in the anti-Trump resistance, tweeting out, “We did it!!!”

Whichever direction the Murdochs take with Fox News in the coming hours and days, their effort to avoid history’s judgment, if not the judgment of courts too, is perhaps doomed even if their network reports the truth now that Trump’s defeat is official. This was noted by Angel Carusone, the chief executive of Media Matters for America. “When this is all over,” he tweeted, “Everyone should take a respite. And then, we need to finally do something about the deceitful and destructive force” that is Fox News.

Updated: Saturday, Nov. 7, 2:50 p.m.
This article was updated to reflect that Joe Biden has been declared president-elect of the United States.