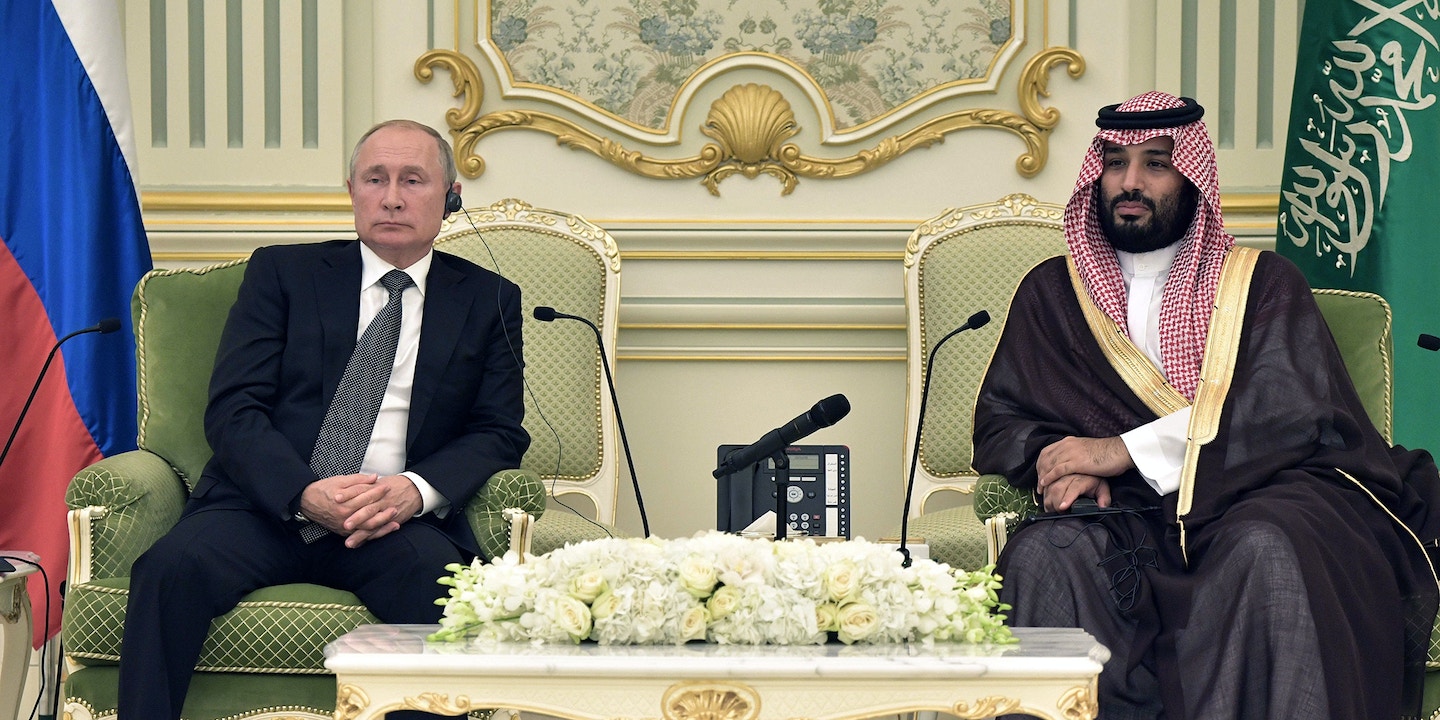 The Saudi-led oil cartel OPEC+’s announcement earlier this month that it was cutting 2 million barrels of oil per day — a move that would drive up the price of oil just a month before midterm elections — rankled Democrats in Washington. They accused Riyadh of aligning itself with Russia, another powerful member of OPEC+, which would indeed profit off the move. “What Saudi Arabia did to help Putin continue to wage his despicable, vicious war against Ukraine will long be remembered by Americans,” said Senate Majority Leader Chuck Schumer.

But Saudi Arabia actually pushed to cut oil production twice as much as Russian President Vladimir Putin, surprising the Russians, two Saudi sources with knowledge of the negotiations told The Intercept, suggesting that Riyadh’s motives run deeper than what top Democrats want to admit. The sources requested anonymity, fearing reprisal by the Saudi government.

Public reporting has hinted at Saudi’s Arabia’s drive for a far more aggressive production cut than Russia as well as other OPEC+ members first sought. On September 27, Reuters reported that Russia favored a 1 million barrel per day cut — just half of what would later be agreed upon. Then on October 5, OPEC+ announced that it would be cutting 2 million barrels a day. On October 14, the White House’s National Security Council spokesperson John Kirby said that “more than one” OPEC+ members disagreed about the cut but were coerced by Saudi Arabia into going along with it — but he declined to specify which countries. The OPEC+ members who privately pushed back against the cut include Kuwait, Iraq, Bahrain, and even the United Arab Emirates, a close ally of Saudi Arabia’s, according to the Wall Street Journal. These countries reportedly feared that the production cuts could lead to a recession that would ultimately reduce demand for oil.

Saudi Arabia, a putative ally, pushed for even deeper cuts than what Russia, a U.S. adversary, even believed they could get away with, the sources said. “People in D.C. think MBS is siding with Putin, but I think MBS is even more Putinian than Putin,” one of the sources, a Saudi close to the royal family, said, referring to Saudi Arabia’s de facto ruler, Crown Prince Mohammed bin Salman.

While Saudi Arabia has maintained that the move was motivated solely by economic interests, the White House and other top Democrats have said that the Saudis are pursuing a conscious alignment with Russia. “The Saudi foreign ministry can try to spin or deflect, but the facts are simple,” Kirby said, alleging that “they knew” that the oil production cut would “increase Russian revenues and blunt the effectiveness of sanctions” against Russia amid its invasion of Ukraine.

Democratic leaders have largely cohered around this messaging. But experts say the cut is targeted squarely at the Democratic Party — something Democratic officials have been loath to admit publicly.

“The Saudis are well aware that the price of gasoline at the pump has been a crucial political issue in the United States since 1973,” Bruce Riedel, a senior fellow at the Brookings Institution, told The Intercept in an email. “They want a big increase to help the Republicans,” he added, explaining that MBS sees the GOP winning back Congress as the “first step to Trump winning in 2024 and a setback for Biden.”

In 1973, Saudi Arabia led an oil embargo designed to punish the U.S. and other countries that supported Israel during the Yom Kippur War. Then, in 1979, Saudi Arabia again led an oil embargo — this time in the wake of the Iranian revolution, with the resultant high gas prices playing an arguably decisive role in Jimmy Carter’s loss to Ronald Reagan in the 1980 presidential race. Carter famously placed solar panels on the roof of the White House in a symbolic plea for the importance of the U.S. extricating itself from oil dependency, a gesture for which he was ridiculed.

MBS’s rule has seen this power wielded in an acutely partisan way. MBS complied with Donald Trump’s oil production requests in two election years: once in 2018, by increasing oil production to bring down prices, and again in 2020 by lowering production, which Trump wanted to protect the domestic American shale industry battered by low demand brought on by the pandemic downturn.

“MBS enjoyed a sweetheart relationship with Trump,” Riedel said. “Trump stood by MBS when he murdered Khashoggi and his war in Yemen which has starved tens of thousands of children; there was never any criticism of the Saudi’s human rights abuses from the Trump administration.”

Trump jettisoned longstanding presidential tradition by paying his first foreign visit as president to Riyadh, where he was showered in gifts and inked a record-breaking $350 billion weapons sale to the kingdom. He also vetoed three separate congressional bills that would have blocked arms sales to Riyadh and reportedly bragged about shielding MBS from consequences for the murder of Washington Post journalist Jamal Khashoggi, saying, “I saved his ass.”

“You don’t need to look hard to understand that MBS is deliberately and persistently acting against U.S. interests and the Biden administration in particular. His actions are not just ‘snubs’ but punches in the face,” said Sarah Leah Whitson, executive director of Democracy in the Arab World Now. “He’s very nakedly using oil as a lever to try to influence the midterm elections with the aim of bringing in more compliant Republicans, trying to show us all who’s boss even in our own democracy.”

The notion that Saudi Arabia could intervene in domestic American politics, verboten in Washington, has been publicly acknowledged by top Saudi officials themselves. In an Arabic language interview for the Saudi state-funded talk show, “Spotlights,” in May 2004, Prince Bandar bin Sultan Al Saud, the Saudi ambassador to the U.S. from 1983 to 2006, said the quiet part out loud: “The kingdom’s oil decisions can influence the election or non-election of the president of the United States, the largest and strongest country in the world. For that to be taken into consideration, regardless of what the kingdom decides to do, is in itself evidence of the strategic weight for the kingdom of Saudi Arabia.”

“He’s very nakedly using oil as a lever to try to influence the midterm elections with the aim of bringing in more compliant Republicans, trying to show us all who’s boss even in our own democracy.”

None of this is to say that Saudi Arabia under MBS hasn’t pursued cozier relations with Russia. MBS’s intensifying relationship with Putin dates back to June 2015, when, frustrated that President Barack Obama had rebuffed MBS’s requests for a meeting, the then deputy crown prince instead opted to meet with Putin on the sidelines of the 19th St. Petersburg International Economic Forum, as The Intercept previously reported.

Left with few options, the Biden administration this week announced that it would release 15 million barrels of oil from the strategic oil reserves. The White House is also considering lifting sanctions on Venezuela to mitigate the economic harm of OPEC+’s production cut, a move that some experts have for years been calling for.

“The U.S. has helped artificially make Saudi Arabia more powerful on the energy markets by sanctioning the oil of other major producers,” Trita Parsi, executive vice president of the Quincy Institute, told The Intercept. “Just as [Secretary of State] Tony Blinken said that the destruction of the Nord Stream gas pipeline was an opportunity for Europe to reduce its dependence on Russian gas, Biden should turn the current crisis into an opportunity to reduce its own dependence on Riyadh by rethinking its unsuccessful energy sanctions on Venezuela and Iran.”