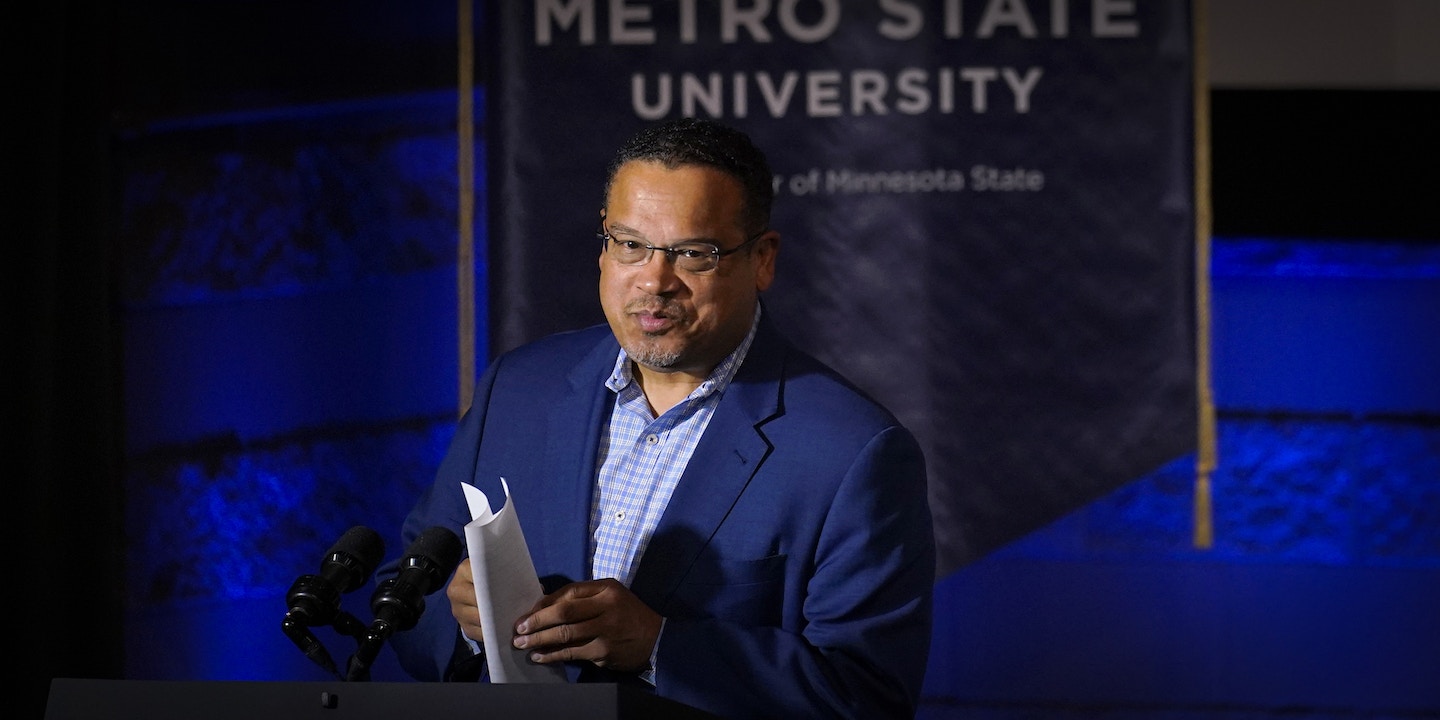 While Minnesota Gov. Tim Walz is expected to hold the governor’s mansion, Democrats in the state are bracing for losses of other key positions down ballot. One of the races Democrats are watching with trepidation is Attorney General Keith Ellison’s reelection bid. Ellison is facing a tight race against Republican candidate Jim Schultz that could hand the position to a Republican for the first time in almost half a century.

Ellison won praise for his office’s handling of the murder case against the police officers who killed George Floyd, but the high-profile prosecution may also be the fulcrum on which his campaign is defeated: Facing the stiff challenge, the more than $300,000 spent on the race by police unions could prove decisive. That police money is going to back Schultz’s campaign, which has gone to great lengths to paint Ellison as being  fundamentally “anti-police.”

Though the police spending doesn’t dramatically swing outside spending totals, it could have an outsized effect because of how policing issues have come to the forefront across the nation, especially in the Minnesota race, where the murder of George Floyd and subsequent protests loom large. In a political environment where even moderate Democratic criminal justice reformers are facing attacks from national and state Republicans on crime, the similar ads from police against Ellison could resonate with voters despite what critics said was misleading messaging.

Though Ellison has a history of working on issues of police misconduct, his campaign and its backers suggested that his push for reform — including a ballot measure last year in Minneapolis that would charter a Department of Public Safety, but not eliminate the police department — is not about being against cops.

“It’s unfortunate that when you decide to stand up for regular Minnesotans and hold some police accountable when they do bad things, that a handful of people can try to label you with this broad brush as being against all of them,” said JaNaé Bates, a minister and the communications director for Faith in Minnesota Action, which is spending to back Ellison. Bates added that the police unions spending to back Schultz are “making it appear that Ellison is anti-police, when the reality is he’s just been anti-bad policing.”

Though Schultz is playing on fears of rising crime, the AG’s office in Minnesota doesn’t prosecute the vast majority of criminal cases, which the county attorneys typically handle. Ellison, though, was asked by the governor — with the consent of county prosecutors and after a request from Floyd’s family — to lead the case against former Minneapolis police Officer Derek Chauvin. The successful prosecution raised the ire of police groups.

MN Police PAC, a political action committee for the Minnesota Police and Peace Officers Association, has spent the bulk of that $300,000, most of it on television ads against Ellison. Part of that spending went toward $24,500 in text ads backing Schultz. The Schultz campaign has also received two maximum contributions of $2,500 each from the union’s legislative fund and the Police Officers Federation of Minneapolis Contingency Fund. Individual police officers from across the state have also contributed to Schultz’s campaign, according to campaign finance records.

Neither the Schultz campaign nor the police groups responded to requests for comment.

As officials like Ellison who support reforming the criminal justice system and holding police accountable have won election in recent years, state and local law enforcement groups have waded deeper into elections for what were once typically uncontroversial offices. The police spending on the Ellison race is part of a larger pattern across the country of police-backed committees spending to influence races for attorney general and district attorney — and to oppose the tide of criminal justice reforms that swelled after Floyd’s murder.

“Jim Schultz and his wealthy backers, like the police union, are spending millions of dollars to sow division and fear.”

“Jim Schultz and his wealthy backers, like the police union, are spending millions of dollars to sow division and fear,” Ellison campaign communications director Faisa Ahmed said in a statement to The Intercept. “These are the same groups that bankrolled the defense of Derek Chauvin and are consistent in their fight for one standard of justice for themselves and another for the rest of us. It looks like they have found their guy in Jim Schultz.”

So-called independent expenditures have played an outsized role in the race. Ellison has raised about $1.5 million to Schultz’s $1.1 million, but other outside spending groups poured in millions. Attorney general associations for both parties each spent more than $1 million, with the Republican Attorney Generals Association coming under fire for using a political action committee that has faced allegation at the state campaign finance board that it coordinated illegally with Schultz’s campaign.

Schultz has campaigned on shifting the primary focus of the attorney general’s office from prosecuting consumer protection and antitrust case to taking on a bigger role in criminal prosecutions. He has vowed to move resources to county attorneys to focus on crime. Before he became attorney general of Minnesota, Ellison had already made a name for himself as a representative of Democrats’ rising progressive wing during six terms in Congress. He had earlier worked as a civil rights lawyer tackling police misconduct.