To justify its 20-year war, the U.S. said it cared about the Afghan people. Now Congress is abandoning those seeking to escape Taliban rule. 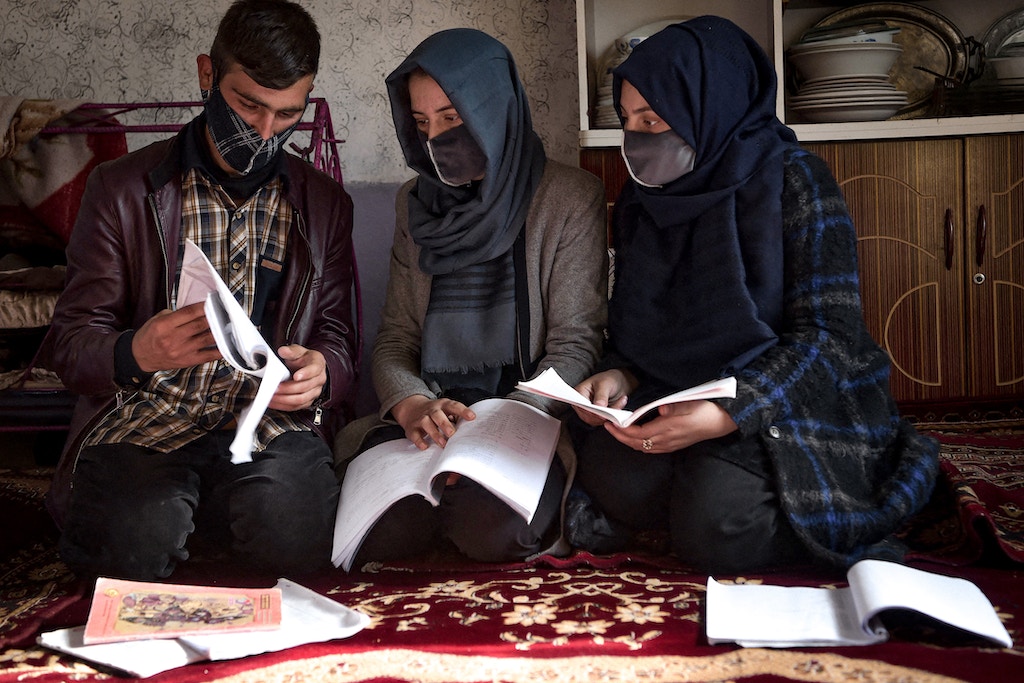 Marwa, center, was months away from attending university as the first woman in her family to do so. She now can’t go under Taliban rule, as her brother, Hamid, left, will attend without her. They read together in their home in Kabul, Afghanistan, on Dec. 23, 2022.

In the early days of the U.S. war in Afghanistan, alleviating the plight of Afghan women under the Taliban was a major part of the campaign to sell the conflict to the American public — and eventually to justify an open-ended military occupation. Whether the United States did much to help Afghan women is a debatable point, largely dependent on which women you ask.

Yet there is no question that today, under the Taliban, a young, educated, and urbanized generation of Afghan women who enjoyed a period of opportunity over the past 20 years is experiencing a catastrophic attack on their basic rights.

The Taliban’s recent decision to ban girls’ education past the sixth grade is only the latest outrage to be inflicted on Afghan women, and another step in a campaign to drag Afghan society back to the climate of medieval repression that reigned during the last Taliban government of the 1990s.

There is one thing that could easily be done to ease the suffering of Afghans under Taliban rule: giving a home to Afghan refugees.

This unhappy situation was not inevitable. There are ideological divisions inside the Taliban, particularly between its leaders who spent the war years abroad mingling in foreign capitals, and those who spent it fighting a grueling insurgency inside the country.

While the Taliban government showed initial hints of pragmatism upon coming to power, today it has become clear that the extremist faction of its leadership is in control and willing to sacrifice the well-being of Afghans and the goodwill of the international community to fulfill its ideological mission.

The United States has scant leverage left to change the calculus of an organization so dead set on its goals. If the words about human rights and women’s empowerment that justified the war for 20 years had any meaning at all, there is one thing that could easily be done to ease the suffering of Afghans under Taliban rule, without risking more harm in the process: giving a home to Afghan refugees.

Last week, Congress failed to pass the Afghan Adjustment Act, a measure that would have given the tens of thousands of Afghans who escaped to the U.S. after the fall of Kabul a path to permanent legal residency. The measure had been supported by everyone from former senior U.S. military officials, who issued a letter calling protection of the refugees a “moral imperative,” to human rights organizations. The Afghan Adjustment Act, however, was left out of the omnibus spending bill passed at the end of the year, reportedly due to opposition from 89-year-old Iowa Republican Sen. Chuck Grassley.

These Afghans arrived in the U.S. on flights hastily arranged by the U.S. military as the Taliban marched on Kabul last summer. They remain in the U.S. on a precarious legal status known as temporary humanitarian parole that places them at risk of deportation.

Many of these refugee families include those who fought with the U.S. during the war or supported the U.S.-backed government — making them and their families prime targets of the new Taliban regime.

The failure to pass the law also leaves Afghans who worked with the U.S. military but remain trapped in Afghanistan today out in the cold, denying them eligibility for Special Immigrant Visas that could provide a legal hope of immigrating to the U.S. if they escape the country.

Many former Afghan allies of the U.S. continue to be hunted down by the Taliban as the group consolidates a regime that is prioritizing taking revenge for the past 20 years above rebuilding their shattered country.

If they are not provided a path to permanent status and are thus left to their fate, the ex-U.S. military officials warned in their letter, in future conflicts, “potential allies will remember what happens now with our Afghan allies.”

The Taliban’s recent decision to kick women out of school has been met with outrage by the international community and international Muslim religious figures, but most of all from ordinary Afghans. Many Afghans, including many men, have staged inspiring walkout protests from their classes to denounce the measure.

Having done more than anyone to take advantage of the opportunities afforded by the U.S. presence in their country, these are the people who deserve whatever support can be provided to them and their families. In the absence of that support, their future is likely to be grim.

Donald Trump’s recent anti-immigrant presidency and the general tenor of Republican politics means that any effort to resettle refugees — those here today and those who may arrive in the future — is inevitably going to be a political fight. That said, a Democratic president will be in office for at least the next two years and will have an opportunity to use their political capital to right an obvious wrong that was done to Afghans by the U.S. — particularly if, as seems likely, the Taliban continue down a course of provocative repression against Afghan women and minorities.

Amid the terrible events now unfolding, it is worth remembering that, for a few months last year, when they appeared to send the world’s most powerful military into a scrambling retreat, the Afghan Taliban enjoyed a strange kind of recognition — maybe even popularity — around the world. Everyone loves a winner, and the triumphant march of the Taliban into Kabul was greeted warmly by everyone from former Pakistani Prime Minister Imran Khan, who said that the group was “breaking the shackles of slavery,” to the American alt-right who projected their own idealized vision of hypermasculinity onto the new social-media-savvy militants.

Even mainstream conservative politicians like Rep. Matt Gaetz, R-Fla., claimed at the time that the Taliban was “more legitimate than the last government in Afghanistan or the current government here” — a statement made with apparent relish at the humiliation of a sitting Democratic president who presided over the final defeat.

Today, that bizarre honeymoon is over. It’s time to deal with the harsh reality of Afghanistan under Taliban rule and its consequences for Afghans.

The U.S. has done a great deal of harm to the Afghan people, using their country as a proxy battlefield, subjecting them to sanctions, and killing them in huge numbers during the war. The least it can do today is give safe haven to those, particularly women, fleeing the collapse of the shoddy government in Kabul that the U.S. government had propped up, and who are now suffering a harrowing attack on their basic freedoms by a Taliban regime that grows more draconian with each passing day.