Women and Journalists Are Targets of Violence in Taliban-Ruled Afghanistan, Report Says

Violence between the Taliban, the Islamic State, and other armed groups is also on the rise, according to the report from two NGOs. 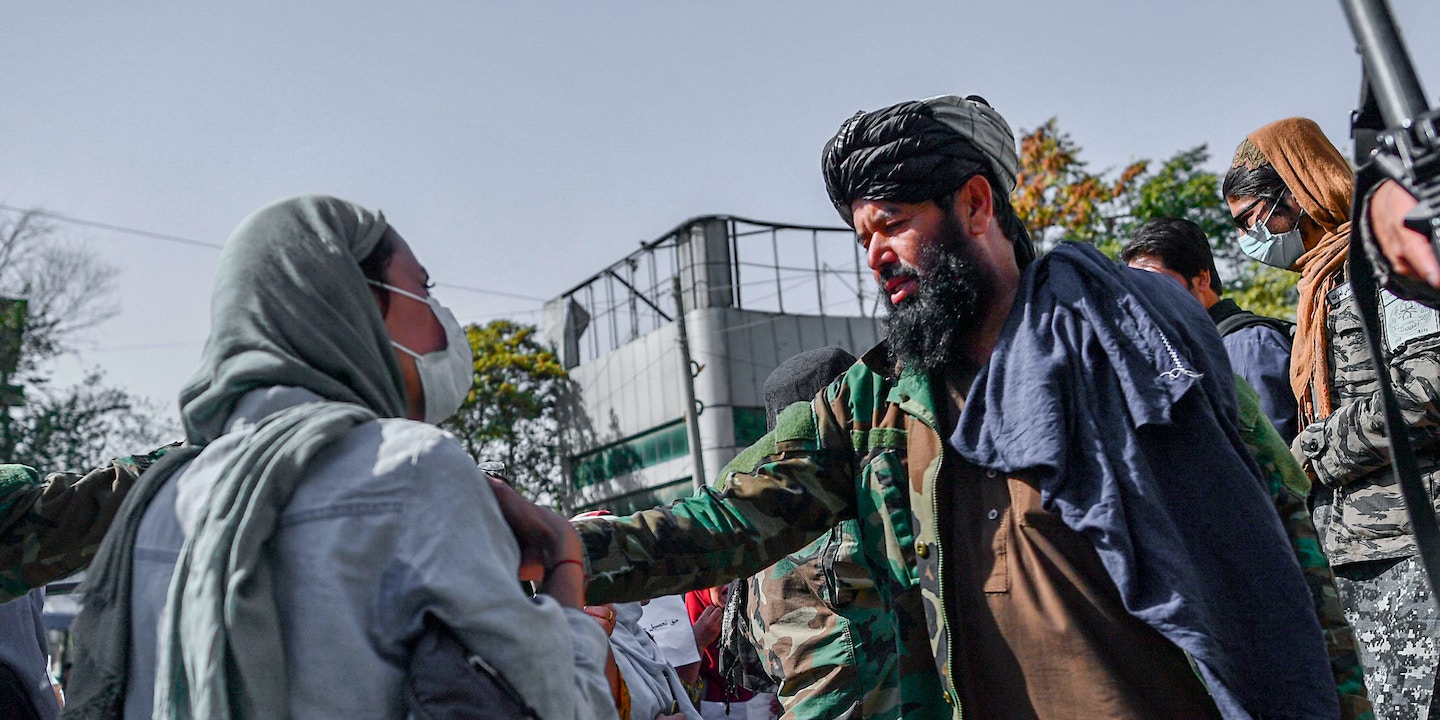 Eight months after a U.S.-supported government in Afghanistan was defeated by the Taliban, violence against civilians and politically motivated violence persist in the country even as incidents have become harder to report and verify amid an intensifying information blackout, a report published today reveals.

Journalists and women, particularly those participating in or covering demonstrations in opposition to Taliban rule, have been increasingly targeted, as have members of the former government and security forces. But Taliban infighting, clashes between the Taliban and the Islamic State, and incidents involving half a dozen anti-Taliban armed groups that have emerged or regrouped in recent months are also increasing, raising the prospect of escalating political violence in the months ahead. The data was compiled by the Armed Conflict Location & Event Data Project, or ACLED, in partnership with Afghan Peace Watch, an Afghan-run violence monitoring group.

The analysis underscores the growing challenge of monitoring reports of political violence at a time when more than 300 Afghan news outlets have shut down, and while many of those that continue to operate have been forced to adapt to Taliban censorship or face significant threats to their staff’s safety.

“The reporting environment, in addition to the political landscape of course, changed really dramatically after the Taliban takeover in August,” Roudabeh Kishi, ACLED’S director of research and innovation, told The Intercept. “The outlets that remain open are facing a lot of censorship, and they are really unable to report on what’s happening on the ground because of the security risks that they face. [Journalists] that do risk reporting anything that contradicts the Taliban narrative have faced threats, intimidation. And even beyond that, some have been jailed, some have been tortured.”

ACLED, which has been tracking violence in Afghanistan since 2017, noted that attacks against civilians have increased in recent months. The Taliban are the main perpetrator, in about half of the reported cases, but the Islamic State and unidentified armed groups are also responsible, although researchers believe at least some of the latter are acting on behalf of the Taliban but trying to mask their involvement.

Civilians have been singled out for their profession or ethnicity, the report notes, with former government officials accounting for 30 percent of Taliban attacks, which sometimes extend to family members. Despite the Taliban promising them amnesty, some 500 former government officials were killed or forcibly disappeared in the first six months of Taliban rule, according to a recent investigation. Minority communities such Hazaras, Uzbeks, and Tajiks have also been targeted and had their land forcibly seized.

Women, who have continued to stage protests against the Taliban’s repressive measures despite the Taliban repeatedly quelling such demonstrations with force, have also been a primary target, particularly in the first months of this year. In some cases, demonstrators have responded to the crackdown by shifting tactics, staging smaller protests in private spaces, recording speeches and promoting them on social media. “Many activists, many women activists, are being targeted specifically for their participation in these demonstrations,” noted Kishi. “Which I think makes these protests particularly important to be tracking.” 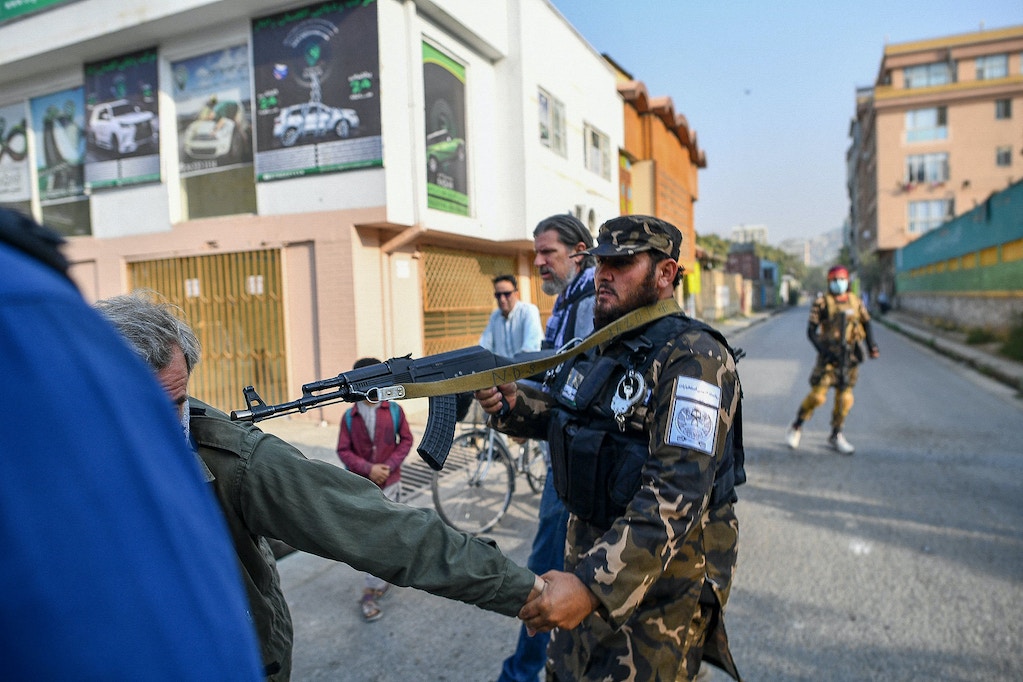 A member of the Taliban special forces pushes a journalist covering a demonstration by women protesters outside a school in Kabul, Afghanistan, on Sept. 30, 2021.

With scores of journalists and human rights defenders having fled Afghanistan in the weeks following the Taliban takeover, groups monitoring incidents of political violence and human rights abuses have had to adapt.

“It has become extremely difficult to collect reliable data,” Ghulam Sakhi, a researcher with Afghanistan Human Rights and Democracy Organization, an Afghan-based human rights group whose members are now abroad, told The Intercept. Sakhi, whose group was not involved in the report, said that its findings are consistent with what he and his colleagues have also monitored from afar. He noted that victims of violence, particularly those released from Taliban detention, are being intimidated against reporting their experiences.

“If they share with anybody, they will be targeted again,” Sakhi said.

He also noted increased Taliban surveillance of journalists and civil society members known to track allegations of abuse. “They text you regularly and follow you on social media. They stop you here and there, just to somehow try to intimidate you and always keep you scared, so that you do not do anything or publish anything that is against the Taliban’s official narrative,” he added.

Most of Afghan Peace Watch’s staff left the country last summer, causing the group to briefly pause its monitoring of casualties and political violence. In order to get around restrictions on the ground, the group now relies on a network of more than 200 activists, elders, teachers, and community leaders spread in provinces across the country, operating undercover to verify allegations of abuse and reports of violence. The group also tracks and independently verifies social media reports in multiple languages, and it monitors official statements from the Taliban.

“But we know as a fact that they are hiding the truth,” Habib Khan Totakhil, a member of Afghan Peace Watch who is outside the country, told The Intercept.

Since December, when Afghan Peace Watch resumed operating, it has tracked more than 800 incidents of political violence that were not covered by local media outlets.

Among the most notable trends is a significant uptick in clashes between the Taliban and armed groups that oppose them, like the National Resistance Front of Afghanistan, as well as the departure of a growing number of disillusioned Taliban fighters to the ranks of the Islamic State.

“We have reports of Islamic State attacks from Kandahar, which is the birthplace of the Taliban,” noted Khan. “The Islamic State has a widespread reach all through the country, and that was not the case before the collapse.”