Lawyers and Lobbyists Fight for Their Slice of $3.5 Billion in Afghan Money Seized by the Biden Administration 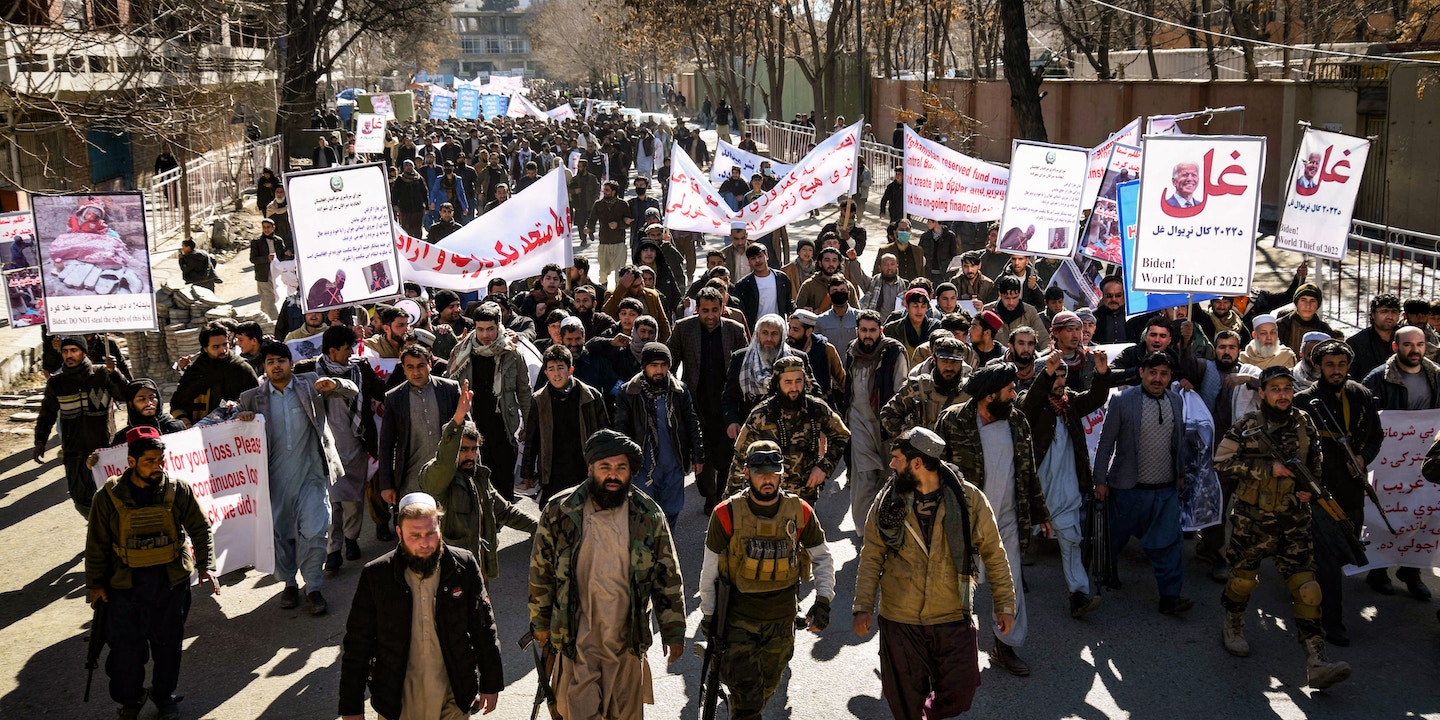 Last Friday, President Joe Biden announced that the U.S. would hold billions in seized Afghan central bank money to pay out to families of victims of 9/11 who had sued the Taliban for damages. The decision, unprecedented given the impact it will have on ordinary Afghans, sparked another round of furious legal infighting and lobbying by attorneys hoping to get a piece of the pie.

In separate letters sent to the court Tuesday, Kreindler & Kreindler and Motley Rice, law firms representing other 9/11 victims in similar cases, claimed that their plaintiffs should get a cut as well. The so-called Havlish plaintiffs, who are set to receive the $3.5 billion, were among the first to file suit against the Taliban seeking compensation and won a court judgment for several billion dollars in 2006.

In his letter to the court, attorney James P. Kreindler claimed that the Havlish plaintiffs represent only 47 victims who died on September 11 and that the court award of the funds would be “to the detriment of the families of the other 2,930 individuals killed that day” and could “irreparably harm” them. Kreindler & Kreindler’s and Motley Rice’s own clients, the lawyers argued, who had filed suits against Sudan, Iran, Iraq, Saudi Arabia, and other foreign governments and private entities, should be entitled to the Afghan money as well.

Already, compensation funds, including one financed by money appropriated by Congress, have paid billions of dollars to the families of victims of 9/11. But the potential for greater payments from foreign governments allegedly tied to the 9/11 hijackers and the Biden administration’s unprecedented seizure of Afghan central bank money have fueled another boom in lobbying and legal advocacy.

Kreindler & Kreindler, in a message to its clients this week obtained by The Intercept, emphasized that there are many outstanding legal issues surrounding the $3.5 billion in Afghanistan central bank funds and that they are working on intervening.

“We are disappointed that the DOJ did not take action that would have made these assets available to the 9/11 Families immediately and on an equitable basis and we are continuing to work with our lobbying team and reaching out to law and policy makers to urge them to do so now,” the law firm noted.

Andrew Maloney, a partner at Kreindler & Kreindler, argued his firm deserves Afghanistan’s money because they didn’t fight the Taliban hard enough. “The reality is, the Afghan people didn’t stand up to the Taliban. … They bear some responsibility for the condition they’re in.” Kreindler & Kreindler and Motley Rice did not respond to a request for comment.

Andrew Maloney, a partner at Kreindler & Kreindler, arguing his firm deserves Afghanistan's money b/c they didn't fight the Taliban hard enough. "The reality is, the Afghan people didn't stand up to the Taliban ... they bear responsibility for the condition they're in." pic.twitter.com/m2jgwYIVXc

The potential payouts for the attorneys themselves are considerable. The law firms have worked on a contingency basis and have squabbled over fee arrangements in the past. But under even a conservative 15 percent fee structure, the Afghan funds would create a windfall of $525 million in legal fees. Some lobbyists may also reap a massive payday from the Afghan funds. In a lawsuit filed in federal court last year, alleging breach of contract, lobbyists formerly working with Kreindler & Kreindler revealed that the plaintiff’s firm had compensated its lobbyists by promising them a percentage of the 9/11 victims’ awards.

K&K, as it is known, is among the many 9/11 victims’ law firms that have orchestrated sophisticated lobbying campaigns to earn themselves and their clients more.

In December, K&K registered the lobbying firm Nueva Vista Group, a well-connected team of Democratic lobbyists to work on 9/11 litigation issues, including issues around the Victims of State Sponsored Terrorism Act. The company’s co-founder, Irene Bueno, was an aide to former President Bill Clinton and a major Democratic donor who advised the Biden campaign on outreach to the Filipino community.

That month, K&K also retained EFB Advocacy, a company run by a former aide to Sen. Susan Collins, R-Maine, to shape policies around 9/11 litigation. K&K has also long retained the services of Ballard Partners, a firm closely tied to the former Trump administration.

When Congress passed the Victims of State Sponsored Terrorism Act, legislators appropriated $3.3 billion in payments in three rounds, from 2017 through 2020. There were multiple attempts last year to update and include “catch-up” payments, or lump sums for certain families eligible for additional disbursements.

Records show many of the leading law firms representing 9/11 victims have spent considerable amounts of money on lobbying. Wiggins Childs Pantazis Fisher & Goldfarb, one of the co-counsels to the Havlish plaintiffs along with Jenner & Block, contracts the Klein/Johnson Group, a firm run by a former aide to Sen. Chuck Schumer, D-N.Y., on laws relating to 9/11 victim compensation.

And there is little comparison to the influence exerted by Lee Wolosky, one of the lead Jenner & Block lawyers involved in the lawsuit. As The Intercept reported this week, Wolosky served as a special counsel to the Biden administration’s National Security Council working on Afghanistan issues as recently as last month. In January, he left the White House and promptly joined the Havlish case.

Cozen O’Connor, the Philadelphia-based law firm working on 9/11 families’ suits against the Saudi government, retains Endgame Strategies, a firm run by a former Republican strategist. Cozen O’Connor lawyer Sean Carter denied that his firm will seek the central bank funds. “Neither we nor any lobbyist working with our firm has made any proposal to any U.S. official related to the Afghan funds,” wrote Carter in an email.

None of the law firms contacted by The Intercept gave information on their fee structures relating to the 9/11 litigation. But a recent lawsuit, filed last October by a lobbyist formerly employed under contract with K&K, provides a window into the gusher of money expected from the litigation and the various incentives for lobbyists working on this issue.

In 2012, Kreindler sought the services of Jack Quinn, a prominent lobbyist, for help influencing legal rules around litigation over 9/11 victim lawsuits. In an initial contract, Kreindler promised .775 percent or 1 percent of the net recovery of legal awards from the consolidated 9/11 litigation to Quinn and another lobbying firm. In other words, as Quinn lobbied to advance the interests of the litigation, he and other lobbyists would receive a percentage of the legal awards.

Quinn, over the years, lobbied for a range of policy changes beneficial to the litigation, including the passage of the Justice Against Sponsors of Terrorism Act, which changes sovereign immunity rules to assist plaintiffs seeking compensation from foreign governments over the attacks on 9/11. Quinn, in a breach of contract lawsuit filed last year, claimed he also lobbied in 2020 to overturn language in the Sudan Claims Resolution Act that would have “erased 9/11 families claims against Sudan.”

Quinn has demanded payment from K&K, arguing that the September 11th Victim Compensation Fund has already distributed some $7 billion and that the lawyers involved in these cases have refused to compensate him adequately according to the terms in his original contract.

Quinn’s attorneys did not respond to a request for comment.

As the legal squabbling continues — with the courts deciding how to dole out the $3.5 billion the Biden administration seized from Afghanistan — several million Afghan citizens face the immediate risk of starvation. The sanctions and bank seizures have not only devastated the Afghan economy, but also forced a mass migration crisis. There are multiple reports of families selling children to afford food to eat and Afghans already dying from lack of food.

“Our people stood side by side with your nation for years, sacrificing more than any other nation in the war on terror,” wrote Sima Samar, the former minister for women’s affairs of Afghanistan, along with more than 125 Afghan women leaders in a recently circulated open letter to Biden, sharply criticizing the seizure of the $7 billion from Afghanistan’s central bank.

“The 9/11 terrorists were not Afghans, and the commander of the terrorists was not an Afghan. We are ourselves victims of this terrorism,” they wrote. “The people of Afghanistan should not be victimized again by this collective failure. The assets of Afghanistan belong to its people. … Taking funds from the Afghan people is the unkindest and inappropriate response to a country that is going through the worst humanitarian crisis in its history. It is the squeezing of a wounded hand.”

Update: February 17, 2022
This article has been updated to include a quote from Andrew Maloney of Kreindler & Kreindler.