Mexico Arrested El Chapo’s Son Before International Summit: “Was It a Gift to Biden?”

With Joe Biden making a historic visit to Mexico, Washington’s fixation on immigration overshadows everything else. 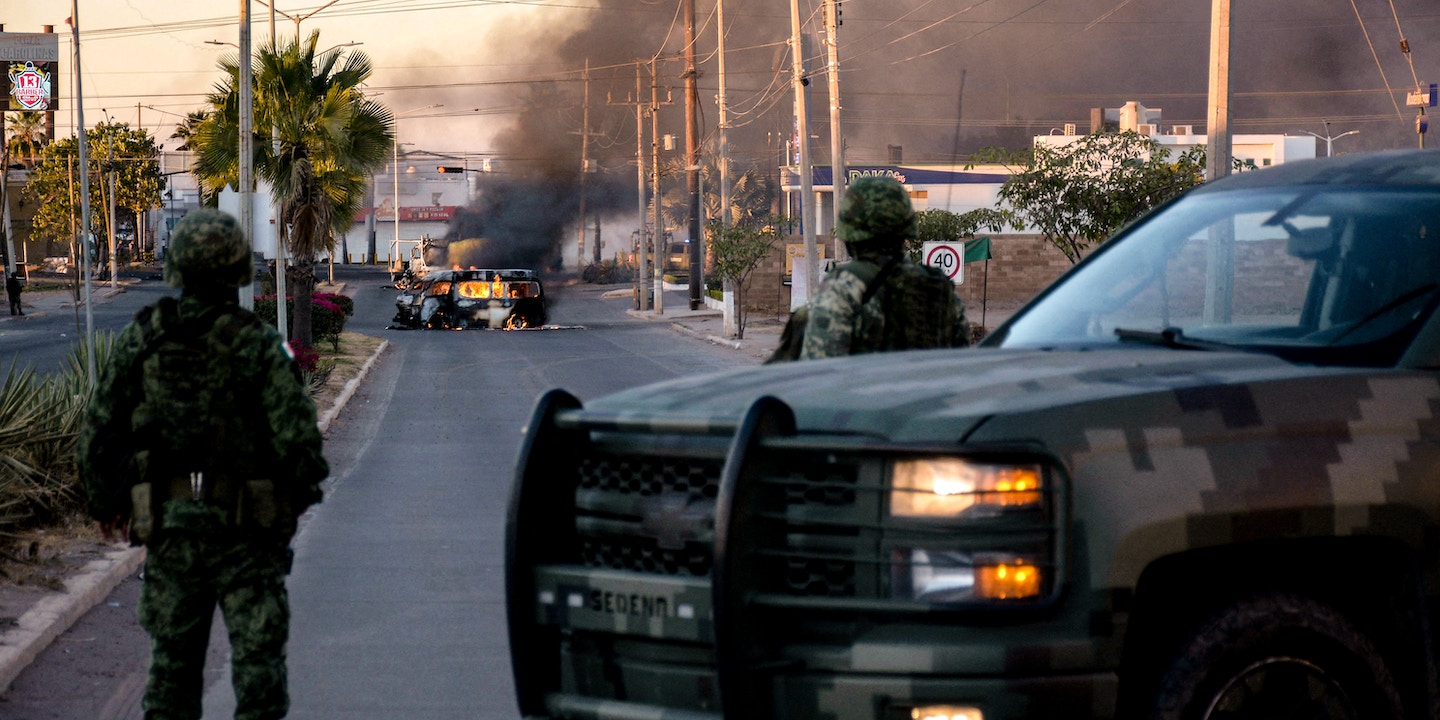 In the predawn hours of January 6, dramatic videos surfaced online from the Mexican state of Sinaloa. In the clips, a Mexican army attack chopper unloaded heavy machine gun fire into the rural fishing community of Jesús María, outside the capital city of Culiacán. Soon after, news broke that Mexican troops had once again arrested Ovidio Guzmán López, the 32-year-old son of world-famous drug trafficker Joaquín “El Chapo” Guzmán Loera.

Though Mexican authorities held on to Guzmán this time around, the raid exacted a heavy cost on Sinaloans still recovering from the last wave of violence. While details continue to surface, the latest reporting indicates that at least 30 people were killed — including 11 soldiers and 19 alleged shooters loyal to Guzmán. At least three civilians, including a child, were reportedly wounded in gun battles that raged for up to 12 hours.

As gunmen were terrorizing Culiacán on Thursday, President Joe Biden announced major policy changes on the U.S.-Mexico border, including the expansion of a Trump administration policy authorizing the summary expulsion of asylum-seekers to Mexico without due process. Both the Guzmán operation and the White House announcement came just three days before a summit, beginning this week, that brings Biden and López Obrador — as well as Canadian Prime Minister Justin Trudeau — together for a meeting to discuss the most pressing issues facing the continent.

Guzmán’s arrest follows a pattern of prior cases where high-level narcos suddenly found themselves under arrest at times of important international summits. Many journalists and analysts speculated that Mexican authorities intentionally timed their operation against Guzmán for this week’s high-profile meeting — showing that, contrary to complaints from U.S. security officials, Mexico was committed to providing justice and security to its citizens.

“Was it a gift to Biden? I don’t know,” Michael Lettieri, a senior human rights fellow at Center for U.S.-Mexican Studies at the University of California, San Diego, told The Intercept. “I kind of go with Occam’s razor there — if it walks like a duck and it quacks like a duck.”

Though Mexican officials indicated that the operation benefited from U.S. support, López Obrador denied that Guzmán’s arrest was politically motivated. “We act with autonomy, with independence,” the president said last week. “Yes, there’s cooperation, that will continue, but we make our own decisions as a sovereign government.”

Guzmán, a flashy young narco, is now being held in the same maximum-security prison that his father tunneled out of in 2015. While the elder Guzmán is serving a life sentence in the U.S., his son’s fate remains unclear. Though he bears his father’s name, Guzmán is considered a less significant figure in the family business than his brothers, and, while he is wanted in the U.S., the López Obrador administration has indicated that he will not be extradited anytime soon.

“He’s a useful scapegoat for fentanyl if he ends up in the U.S. At the same time, how quickly is he going to end up in the U.S.? I’m not so sure,” Lettieri said. “I would suspect that if Biden thinks he’s getting the gift, he’s going to find that the gift takes a while to arrive.”

Gift or not, Lettieri pushed back on suggestions that Guzmán’s recapture reflected a moment of redemption for López Obrador following the events of 2019.

“I would suspect that if Biden thinks he’s getting the gift, he’s going to find that the gift takes a while to arrive.”

Despite a deployment of 3,000 Mexican soldiers, hundreds of civilian vehicles were commandeered by Guzmán’s “pistoleros.” Many of the carjacked vehicles were torched as Guzmán’s forces descended on the airport, where they opened fire on aircraft with .50 caliber sniper rifles — all but certainly procured in the U.S. — in an attempt to prevent his removal from the city.

“There’s so much on the table in terms of bilateral issues,” he said. “Security is never the top one.” Biden’s visit to Mexico City, the first for a U.S. president in nearly a decade, finds the relationship between the countries dominated by Washington’s fixation on immigration. Driven in no small part by endless attacks from a Republican Party unlikely to ever to declare satisfaction with the Democrats’ response to the issue, the president’s approach has left many experts and advocates unimpressed, frustrated, and disappointed.

“When the Biden administration speaks to the Mexican government, the central priority is how to further reduce arrivals and accessibility at the U.S. border to migrants and asylum-seekers, unfortunately,” Stephanie Brewer, director of Mexico policy issues at WOLA, a Washington-based research and advocacy organization, told The Intercept.

That fixation is the extension of a view held among officials and policymakers in Washington over recent years that the U.S. should “externalize” its border security mission — meaning that the project of stopping unauthorized immigration into the U.S. should begin in Mexico or better yet, in Central and South America.

The project began in earnest the last time Biden was in the White House, serving as vice president in the Obama administration. The U.S. poured millions of dollars into Mexican security forces in an effort to clamp down on Central American migration across Mexico’s southern border.

The Trump administration took the effort even further, threatening to shut down border trade unless Mexico agreed to programs — illegal under U.S. domestic and international law — in which asylum-seekers were systematically dumped in under-resourced and dangerous communities in northern Mexico to wait out their cases.

In his announcement last week, Biden expanded one of those Trump-era programs — known as Title 42 — to allow the expulsion Cubans, Haitians, and Nicaraguans, further cementing the border externalization project of his predecessors.

By investing so much in pushing the border out, the U.S. weakens its own negotiating positions on other critical issues with Mexico, Brewer argued, including creating a public security framework that goes beyond the militarized, whack-a-mole drug war operations that rocked Culiacán last week.

The current arrangement simultaneously puts Mexico — a country where disruptions in the day-to-day operations of organized crime can lead to the shutdown of entire states — in a position to receive tens of thousands of vulnerable people. Many of those will arrive as part of families with small children fleeing the very same forces of organized crime, corruption, and state violence that dominate large swaths of Mexico.

Under those conditions, “the whole bilateral relationship becomes distorted in furtherance of inflicting suffering and violating the rights of asylum-seekers,” Brewer said. “And there’s no clear benefit for anyone in that scenario.”

“This is not going to convince people who are on the other side of the spectrum.”

Over the past two decades, hundreds of thousands of people have been killed in the so-called drug war in Mexico — a misleadingly simplistic name that refers to an infinitely complex pattern of violence, conflict, and official impunity that implicates U.S. and Mexican policymakers and citizens alike. Brewer contended that the urgent need to address this insecurity is one of the many critical binational issues overshadowed by an attempt to satisfy critics who will never be satisfied, no matter how much Biden pares back longstanding U.S. commitments to upholding domestic and international asylum laws.

“This is not going to convince people who are on the other side of the spectrum,” she said. Caught in the middle are everyday people — from Mexicans attempting to live their lives in communities like Jesús María, to asylum-seekers turned back at the border. “They’re the principal ones who are losing in this equation,” Brewer said. “They have nowhere to go.”

In the days since Guzmán’s arrest, residents of Jesús María have described the violence they witnessed last week. While the government insisted that no civilians were harmed in the operation, witnesses told the local news outlet Ríodoce that two innocent bystanders were injured by bullets that punctured their roof and that a boy between the ages of 10 and 12 was shot in the head by a soldier after stepping outside his home. The paper reported that the boy was transferred to a hospital and, as of Thursday, is still alive.

If there’s one thing he’s learned in his many years tracking human rights abuses in Mexico, Lettieri said, “it’s that when those helicopters start shooting like that, the likelihood that it’s basically an extrajudicial execution is pretty high.” He’s awaiting further, independently confirmed information on the deaths of nongovernment personnel reported last week.

“The use of helicopter gunships, it’s war tactics,” Lettieri said. “And it’s not always clear that it’s particularly attuned to human rights.”