Senate Torture Report Will Be Public in 2 to 4 Weeks, Says Feinstein 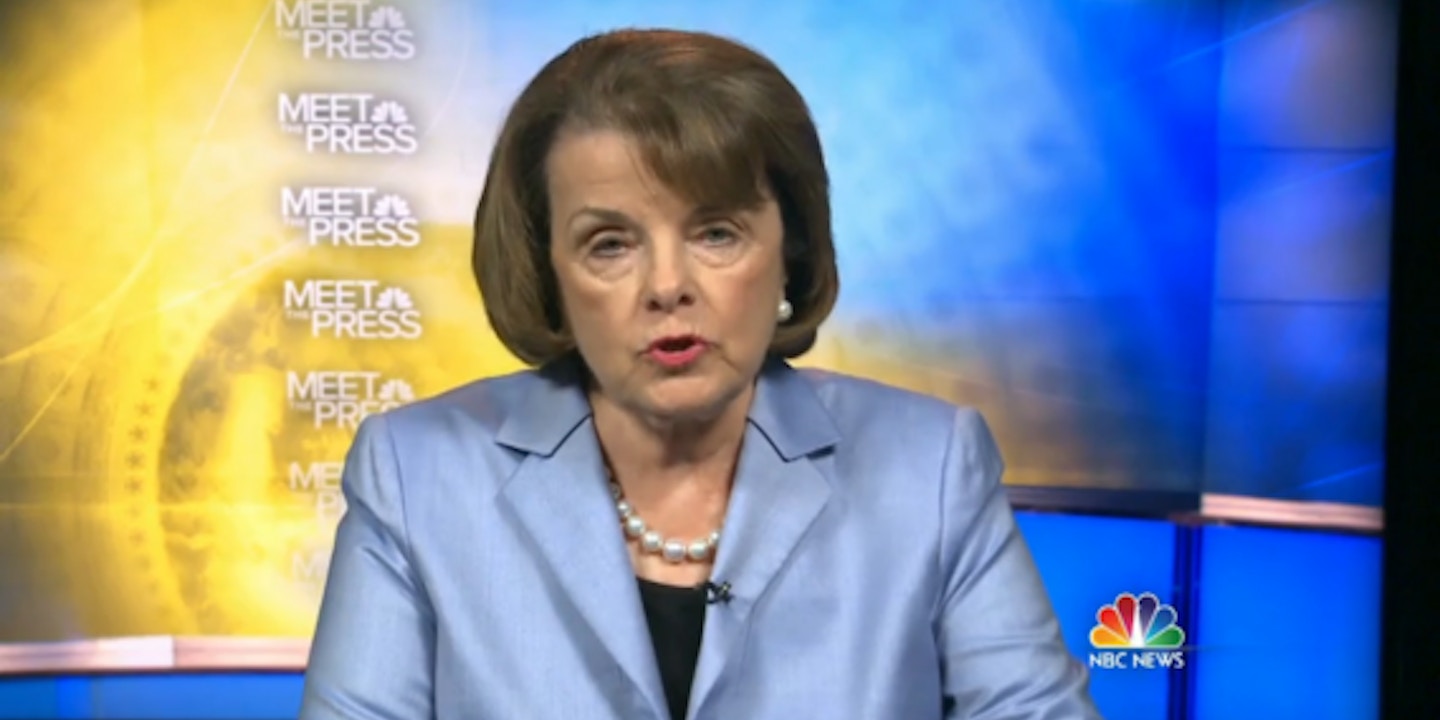 Senate intelligence committee chair Dianne Feinstein expects the executive summary of her staff’s long-awaited report on the torture of American detainees to be ready for public release before the end of September, she said in an unaired segment of her “Meet the Press” interview this weekend (starts at 10:25 of the video).

The torture report, which was five years in the making, was sent to the White House for declassification in April. But the exhaustive redactions that Obama administration officials sent back in early August included such things as the elimination of pseudonyms, apparently to make the report too confusing to follow, and the blacking out of copious supporting evidence, such as proof that information derived from torture actually came from other intelligence sources.

“What we are engaged in is working with the administration to see that the redaction is such that it does not destroy the report,” Feinstein told NBC’s Andrea Mitchell. “If you redact the evidence — heavily — then we cannot sustain our findings. We will not put out a report that does not enable us to sustain our findings. And I believe that that is understood.

“Progress has been made. I think the report will likely come out in the second half of September sometime — but it won’t come out until it is readable and understandable.”

People who have seen the report’s executive summary have told reporters that it discloses abuse that was more brutal, systematic and widespread than generally recognized — and presents extensive evidence that officials most closely linked to the torture regime lied to others inside the CIA and the Justice Department, as well as to Congress and the public, about what they were doing, what they had done, and what it accomplished.

Feinstein also agreed with Mitchell’s suggestion that Islamic militants in Syria tortured Americans — including journalist James Foley, who was reportedly waterboarded before being beheaded — in a “rebuke” to the U.S. for its own use of torture during the Bush administration.

“The United States military has always prevented any kind of torture or waterboarding because they felt that then, whatever the enemy was, would come back and do it to our people,” she said. “In this case, the enemy came back and did it to one of our citizens.”

Feinstein’s praise for the military is somewhat misplaced. Yes, the most documented and obvious acts of torture were conducted by the CIA; and a few military lawyers even tried valiantly to stop it, for the reason she cited, among others. But the Defense Department was directly responsible for the lion’s share of abuse. An earlier, highly definitive Senate report — this one from the Armed Services Committee in 2008 — concluded that Bush defense secretary Donald Rumsfeld and his deputies were the authors and chief promoters of harsh interrogation policies used at Abu Ghraib, Guantanamo, and elsewhere.

Mitchell also didn’t ask about the possibly even bigger issue now swirling around the torture report — the genuine constitutional crisis sparked by the CIA spying on Senate staffers, then denying it, then admitting it. This despite the fact that Brennan’s biggest public whopper came while talking to Mitchell herself — at a Council of Foreign Relations talk that she moderated.

“As far as the allegations of the CIA hacking into Senate computers, nothing could be further from the truth,” Brennan told her in March. “We wouldn’t do that. I mean, that’s just beyond the, you know, the scope of reason in terms of what we do.” In late July, Brennan acknowledged that he had been in error. For more background, see my July 31 post: “It’s About the Lying“.