Bush’s Weapon of Choice in the Post-War Cover-Up: The Non-Denial Denial 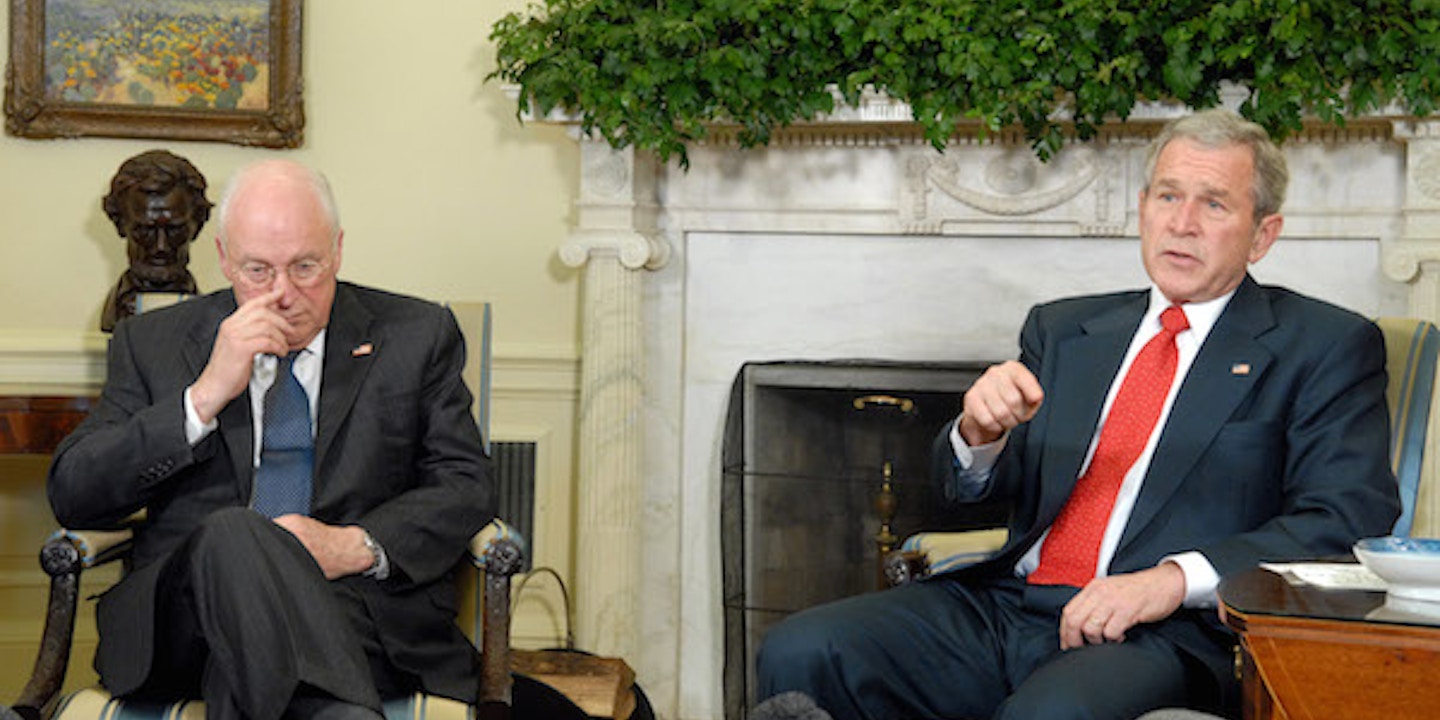 [This is the fifth post in a series on non-denial denials; see also parts one, two, three and four.]

After launching a war under false pretenses, and then botching its execution, George W. Bush and Dick Cheney had a lot of denying to do.

Some they achieved by vaguely asserting a completely false counter-narrative and sticking to it. (Something like: “We got it wrong, but in good faith.”)

And the elite Washington media, which had so eagerly served as  complicit enablers during the run-up to war, was hardy in a position to push back very hard.

But every so often, a very specific, detailed charge would emerge, with the potential to trip up that false narrative — and that’s when the non-denial denials flew fast and furious.

For instance, when it was first published in May 2005, the Downing Street Memo was considered a “smoking gun” by critics of the Iraq war who had concluded – quite correctly – that Bush and Cheney never had any intention other than invading Iraq.

The memo, the report of a high-level meeting in July 2002, quoted one British official just back from Washington as saying the Bush White House was set on invading Iraq long before it was ready to say so publicly, and that it was in fact “fixing” the intelligence around its policy goals.

(Bush invaded Iraq in March 2003; even in his autobiography “Decision Points,” he does not cite a “decision point” for going to war – because there wasn’t one. It was all a charade.)

I don’t know about the specific memo. I’ve seen the reports, and I can tell you that they’re just flat out wrong. The president of the United States in a very public way reached out to people across the world, went to the United Nations, and tried to resolve this in a diplomatic manner.

It took fully six weeks – and the offer of a $1,000 reward from liberal activists – before the White House press corps even asked Bush about the memo, and before the elite Washington media would pay it any attention.

When asked, Bush said he had read a “characterization” of the memo, which he described as “somebody” saying “we had made up our mind to go to use military force to deal with Saddam.”

“There’s nothing farther from the truth,” Bush said. (Much like CIA Director John Brennan would say years later, about his agency breaking into Senate computers.)

I don’t recall anyone in the U.S. government ever denying the authenticity of the memo, or addressing how the British official could have come to such a conclusion.

The Valerie Plame case was also sparked by a specific, documented claim of how the White House had intentionally misused intelligence findings in the run-up to war.

The White House was so intent on smacking that claim down that it led to a rare potential moment of accountability – averted by some plain old out-and-out lies. But along the way, the non-denial denials flew fast and furious.

We now know that presidential advisor Karl Rove and vice presidential aide Scooter Libby outed Plame as a CIA agent as part of a campaign to discredit her husband, Joe Wilson, a former ambassador who was becoming an outspoken critic of the war. (The fact that former deputy secretary of state Richard Armitage was the first person to mention Plame to the media is a fascinating historical footnote, but does change what the White House did or why.)

At the time, McClellan — who later revealed in a tell-all book that he had been lied to by Libby and Rove, and had been specifically urged by Bush and Cheney to vouch Libby’s innocence — resorted to one non-denial denial after another.

“It’s absurd to suggest that the White House would be engaged in that kind of activity. That is not the way this White House operates,” he said in October.

Later, it turned out that Rove’s denials that he was involved in telling reporters about Plame were based on Clintonian hairsplitting about whether he literally used her name and identified her as covert or he simply described her as Wilson’s wife who worked at the CIA.

Libby, who lied about telling reporters about Plame rather than implicate Cheney (who had told him to), was eventually convicted of perjury and obstruction of justice – although Bush commuted his sentence.

And on a much lighter note, what about the Bush “bulge”? Photos from his first presidential debate in 2004 sparked speculation that Bush was possibly getting audio cues over some sort of wireless device strapped to his back, under his suit coat.

The many denials that ensued were not, in fact, actual denials.

“It is preposterous,” campaign spokesman Steve Schmidt said. He declined to elaborate or to suggest what could have produced the unusual photo.

“I think it is about the most ridiculous story of the campaign,” said Scott McClellan, the White House press secretary. Bush campaign manager Ken Mehlman tried to laugh it off:

Gibson: “What the hell was that on your back, in the first debate?”

Bush (chuckling): “Well, you know, Karen Hughes and Dan Bartlett have rigged up a sound system — ”

Gibson: “You’re getting in trouble — ”

Gibson: “It was the shirt?”

Bush: “How does an electrical — please explain to me how it works so maybe if I were ever to debate again I could figure it out. I guess the assumption was that if I was straying off course they would, kind of like a hunting dog, they would punch a buzzer and I would jerk back into place. I — it’s just absurd.”

Technically, yes, it was the shirt. But what was under the shirt? Maybe we’ll find out someday.