Al Qaeda in the Arabian Peninsula: We Directed Paris Attack as ‘Vengeance for the Prophet’

Al Qaeda in the Arabian Peninsula (AQAP) has now officially taken responsibility for the attack on the offices of Charlie Hebdo in Paris last Friday, but denied any involvement on the subsequent attack on the kosher supermarket in Paris. 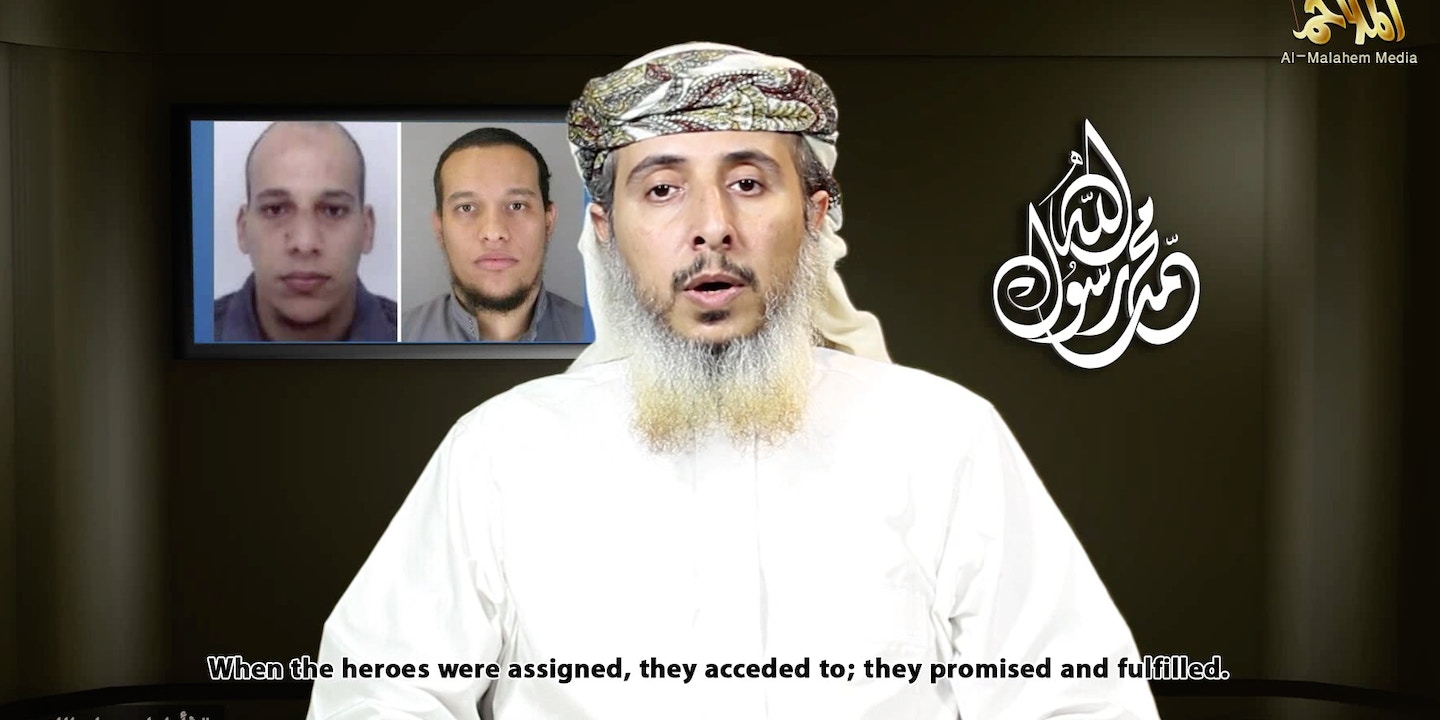 Al Qaeda in the Arabian Peninsula (AQAP) has now officially taken responsibility for the attack on the offices of Charlie Hebdo in Paris last Friday, but denied any involvement in the subsequent attack on the kosher supermarket in Paris.

In a 12-minute video recording, titled “Vengeance for the Prophet,” released by AQAP’s media outlet al Malahim, Sheikh Nasr bin Ali Alanesi said, “We in the Organization of Qa’idatul Jihad in the Arabian Peninsula claim responsibility for this operation as a vengeance for the Messenger of Allah. We clarify to the ummah [the Muslim world] that the one who chose the target, laid the plan and financed the operation, is the leadership of the organization. We did it in compliance with the Command of Allah and supporting His Messenger – peace be upon him.” Alanesi added that “the arrangement” for the operation was “made by” Anwar al Awlaki, the US-born radical cleric who was killed in a US drone strike in September 2011. Awlaki “threatens the West both in his life and after his martyrdom,” he added. Alanesi did not clarify what exact role Awlaki played in planning the attack.

[Update: When asked for more details about Awlaki’s alleged role in the Paris attack, an AQAP source told The Intercept that Awlaki’s role was as the “coordinator between [the AQAP] leadership and the Kouachi brothers.” That still does not resolve the particulars, but the AQAP source would not confirm that Awlaki was personally directing the plot, which was conducted more than three years after Awlaki’s death, saying only that it was a directed by AQAP’s leadership.]

Alanesi warned that the Paris attack marked “a new turning point in the history of confrontation,” adding:

“It has its consequences. Let us not let the disbelievers be more united in their disbelief and insulting the prophets than us in supporting our religion and Prophet. Those are our brothers. They were generous with their lives in supporting our Prophet peace be upon him. So what are we going to do, o Muslim ummah?

Let us support our Prophet, religion and ummah. Each one as per his capability and specialty. This is the Sunnah of Allah that does not change; a confrontation between truth and false until the Day of Judgment. Rise up o Muslim youth in support of your prophet. Be generous with your lives like your predecessors did. Take vengeance for the Muslim blood that is spilled, the honors that are defiled, the Quran that is torn.”

Soon after the massacre last Friday, an AQAP source provided a series of messages taking responsibility for the attacks. Historically, the group has released such claims through its own networks and social media channels. Now that this has happened, it seems very likely AQAP played a role in the attacks. The extent of that role remains unclear. Read the full AQAP claim of responsibility in English

As we reported earlier this week, “In analyzing AQAP’s potential role in the Paris attack, it’s worth remembering the four-month delay between the group praising the 2009 underwear plot and the group releasing evidence it actually orchestrated the act. Short of such video or photographic documentation, and even with an official statement from AQAP’s leadership, it would be difficult to prove that AQAP indeed sponsored the raid on Charlie Hebdo.” If such photographic or video evidence exists, AQAP will undoubtedly release it. When pressed as to whether the group has and will publish proof of this nature, an AQAP source told The Intercept, “We are not in a hurry.”

For in-depth analysis of AQAP, Anwar al Awlaki and the Paris attacks, see our previous coverage here and here.