Lobbyists must tug at the Energy Secretary’s sleeve to get him to listen — unless they work for the National Petroleum Council. 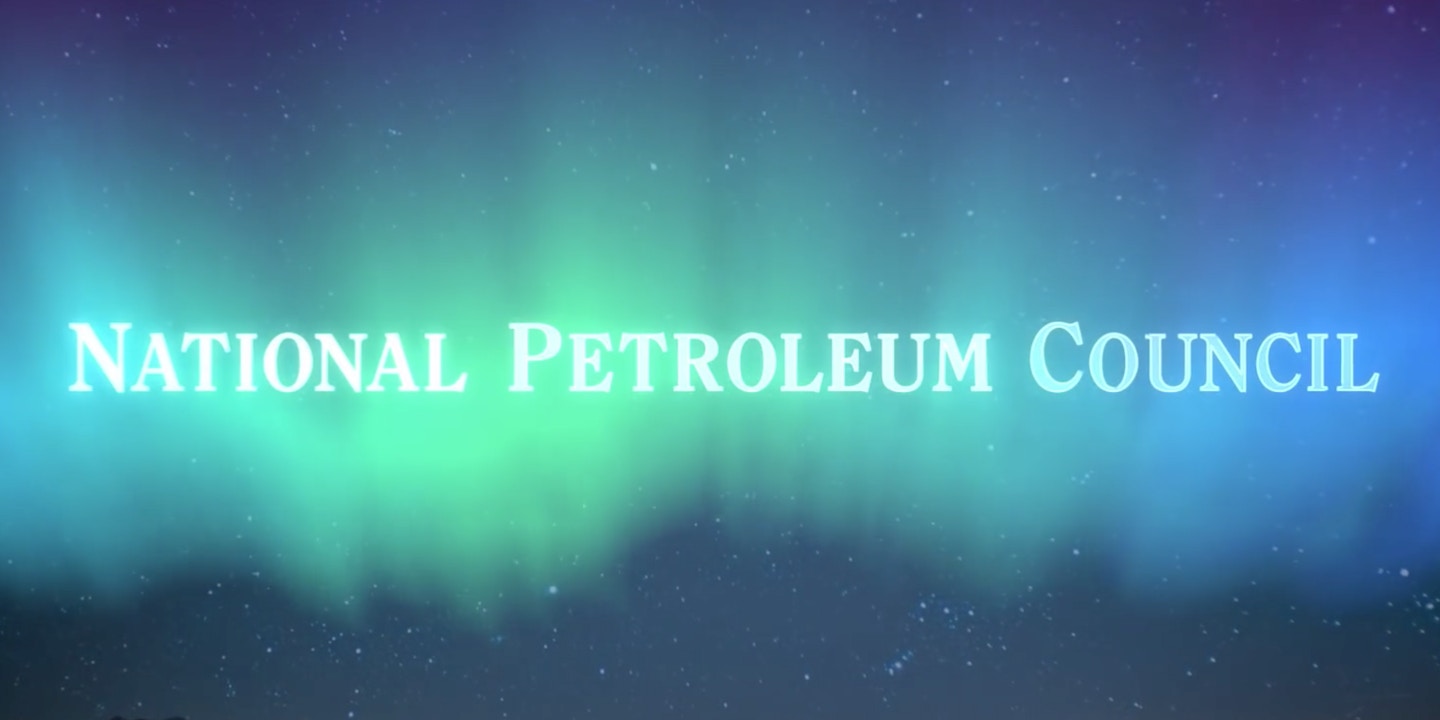 The promotional video above opens with a crescendoing tune as the words “National Petroleum Council” appear from behind neon green and blue Northern lights, shimmering in a starry sky.

Collaboration. Prudence. Traditional knowledge. All values that guided members of the National Petroleum Council — or NPC — as they responded to Secretary of Energy Ernest Moniz’s request for advice on how the government could “ensure prudent development” of the U.S. Arctic’s largely untapped fossil fuel reserves.

Back in October 2013, Moniz had penned a letter to the NPC, opening with a reflection on what it might take to build “a clean energy economy,” “tackle the issues of climate change” and “protect our environment.” And since a “core component” of the Obama’s administration policy for the Arctic includes “responsibly developing Arctic oil and gas,” Moniz wanted the NPC’s suggestions on how to do that.

The result was a several-hundred-page document titled “Arctic Potential: Realizing the Promise of U.S. Arctic Oil and Gas Resources.” The gist: any risks associated with extracting offshore oil in remote Arctic waters are manageable using “existing, field-proven technology.” Also, the U.S. should lengthen the drilling season and lease durations so that it’s easier to start making money.

You might assume the NPC is an industry lobbying group. But as I explained last week, the National Petroleum Council is one of hundreds of “federal advisory committees.” Such committees aren’t always dominated by industry, but the NPC certainly is: it’s member-funded and its 210 members are largely drawn from the fossil fuel business. So while the official lobbyists for the oil and gas industry may have to tug at Moniz’s sleeve to get him to listen to their suggestions, the dynamic is reversed with the NPC: Moniz goes to the group for help. And its more than happy to provide advice on issues that impact its members’ bottom line — as well as the security and well-being of everybody else on the planet (who, of course, do not have representation at the NPC).

The video’s burbling soundtrack continues, sounding like a for-profit college ad that runs at 3 a.m. on a Tuesday, guaranteeing you job security in the field of your dreams if you just sign up. To the NPC’s talking heads, it’s all about balance.

“There’s a lot of balancing interests. There’s the balance between conservation and resource development. There’s the balance between traditional knowledge and what we call ‘Western science and engineering,’” says Richard Glenn, executive vice president for the Arctic Slope Regional Corporation, a company owned by Alaskan Iñupiat shareholders that holds title to huge tracts of Alaskan land with oil and gas reserves.

Glenn does not mention the balance between the multimillion dollar investments of the NPC’s members and the scientific evidence that burning more fossil fuels will lead to climate chaos. Nor did Rex Tillerson, Exxon Mobil CEO and chair of the NPC’s Committee on Arctic Research, in an interview with the Associated Press on the report. According to Tillerson, “There will come a time when all the resources that are supplying the world’s economies today are going to go in decline … [Arctic oil reserves] will be what’s needed next. If we start today it’ll take 20, 30, 40 years for those to come on.” In other words, Exxon has moved smoothly from spending millions of dollars to deny that climate change is happening, to saying that it’s here, and we have to let the company take advantage of the melting ice to burn more fossil fuels.

Yet it’s Shell President Marvin Odum who takes the prize as the NPC member with the most obvious interest in justifying Arctic oil extraction. Shell is pushing to gain the permits necessary to become the only company drilling offshore in the U.S. Arctic this summer, in Alaska’s Chukchi Sea.

Not to worry, though, NPC Director Marshall Nichols assures viewers of the promo video: “The council is not an advocacy group, it is not involved in any of the usual trade association activities, and it does not lobby.”

Apparently the Energy Department agrees. At the March 27 annual NPC meeting, Deputy Energy Secretary Elizabeth Sherwood-Randall helped unveil the report and declared, “The study’s recommendations align with the Department of Energy’s mission, the president’s strategy for the Arctic and the president’s all-of-the-above approach to developing.”

She said the industry group’s advice may influence the department as research agendas are set in 17 national laboratories, as policy is developed by the new Arctic Executive Steering Committee and as the U.S. steps into its leadership role in the international Arctic Council. It took only three weeks for the report to be cited in the Energy Department’s Quadrennial Energy Review.

“The result of this warming is a new frontier with increasingly accessible resources,” she told the council members, adding later, “Your leadership and cooperation will position us to lead in the Arctic.”