The bombing campaign in Syria will not defeat the Islamic State. Yet nothing would turn Iraqis and Syrians to the jihadis more quickly than a Western invasion. 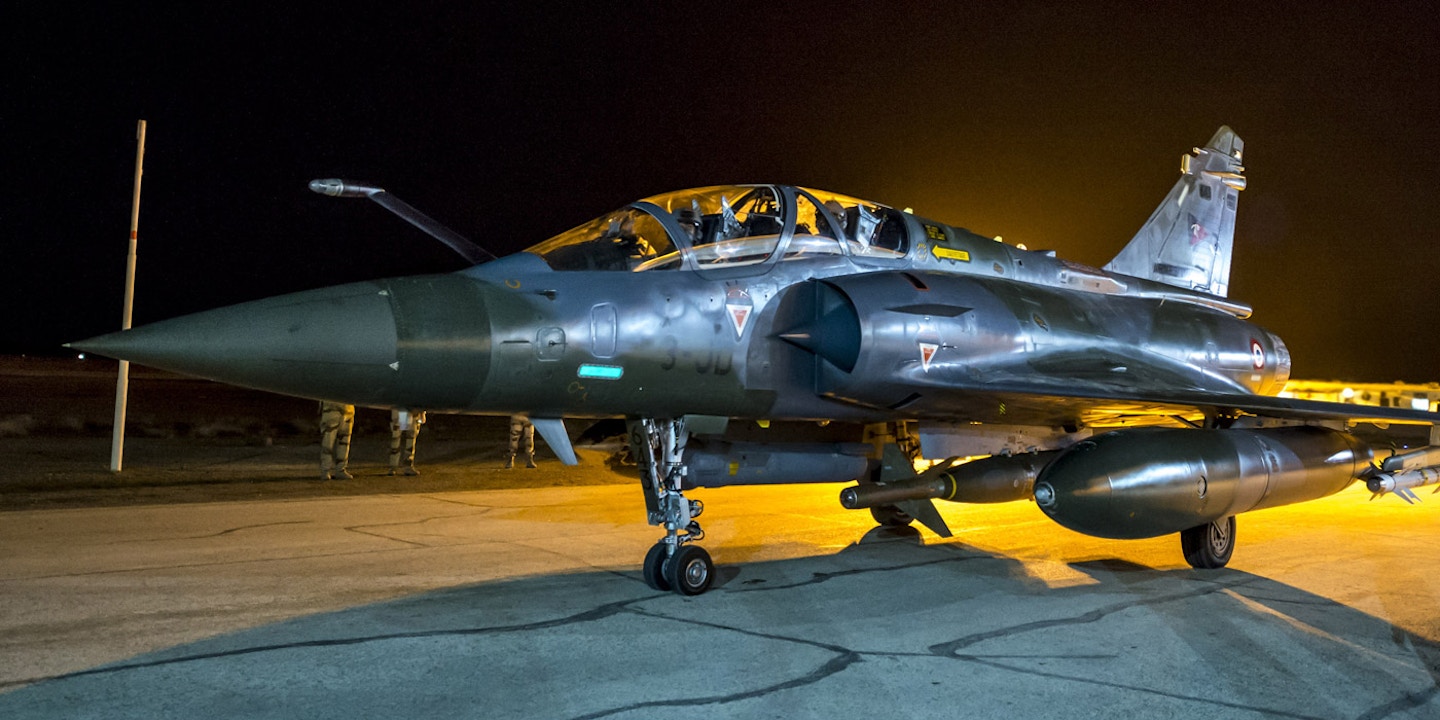 A FRENCH NEWS CAMERAMAN burst into the bar of Beirut’s Commodore Hotel, where his colleagues gathered most evenings, on November 17, 1983. “At last,” he shouted, cupping both hands upward, “someone with balls!” French warplanes had just bombed the town of Baalbek, site of magnificent Roman ruins but also of a Shiite Muslim militant barracks. This was France’s revenge for the killing of 58 French troops by a suicide bomber four weeks earlier. On the same morning the French died, the United States had lost 241 American service personnel, most of them U.S. Marines, to another suicide bomber. So far, Washington had not responded. We learned later that Defense Secretary Caspar Weinberger, who was against sending Marines to Lebanon in the first place, had dissuaded President Ronald Reagan from bombing Lebanon until there was evidence to prove who had done it.

France’s bombardment satisfied one French cameraman. It changed nothing, except for the civilians and militants who died in Baalbek. When the U.S. finally bombed eastern Lebanon in December, Syrian air defenses downed a Navy A-6 Intruder. The pilot, Lt. Mark Lange, died when his parachute malfunctioned. The navigator-bombardier, Lt. Robert O. Goodman, became a prisoner for 31 days until the Syrians released him to Reverend Jesse Jackson. And that was that.

By April 1984, the French and American forces of the ill-advised Multinational Force had left Lebanon. French President Francois Mitterrand’s promise to remain in defiance of those who had murdered his soldiers was forgotten, as was President Reagan’s commitment to peace in Lebanon. The civil war, already in its eighth year, did not end until 1990. The parties behind the bombing of the French and American troops, the Hezbollah militia and its backers, Iran and Syria, emerged more or less victorious. In fact, Syria had proven itself so powerful in Lebanon that the U.S. approved its military occupation to keep order. Syria went too far by assassinating former Lebanese Prime Minister Rafic Hariri in February 2005, and its troops were forced to evacuate the country two months later.

Supporters of American, French, and British bombing in Syria at this time may exult that these Western powers are displaying their “balls,” but there is every probability that they will balls it up. They have made a mess of Syria since they involved themselves there in the vain attempt to bring down President Bashar al-Assad in 2011. Islamic State fanatics emerged as the dominant power within the anti-Assad forces. They are not anti-dictatorship so much as anti-minority, particularly the ruling quasi-Shiite Alawite minority. The Western powers tolerated ISIS’ crimes, until ISIS turned from its bases in Syria and seized about a third of the American protectorate of Iraq. It was then that the U.S., to save the Kurdish capital at Erbil and the national capital of Baghdad, first bombed ISIS positions. Since then, other countries, including the Russians who sought to save their Syrian protectorate, have joined the crusade against the Islamic State.

ISIS has turned around and murdered people from most of the countries that have challenged it: Shiite civilians in Iraq and Syria; Kurdish and left-wing Turkish peace demonstrators in Ankara; passengers on a Russian airliner over Egypt; Shiites, because of Hezbollah’s involvement, in Beirut; and more than 120 innocents in Paris.

These international attacks, as well as the oppression and terror that ISIS has inflicted on large parts of Syria and Iraq, do not call for a response.

The Islamic State’s international attacks call for a strategy. If the goal is to eliminate ISIS from territory it rules in Iraq and Syria, and from which it plots murder elsewhere, the forces opposed to it must come together. It took more than 100 dead in Paris and 224 passengers on a Russian airliner for France and Russia to coordinate their airstrikes in Syria. What will it take for the U.S. to do the same?

Airstrikes, however, do not win wars. Warplanes drop bombs, meaning they function as airborne artillery. No military doctrine holds that artillery alone can conquer territory. That takes forces on the ground. The ground forces exist in both Syria and Iraq, and they are not from the Western world. The Syrian Army, though odious to many Syrians and to the Western powers, is the strongest of these and has weathered four-and-a-half years of war without breaking up. It lost territory to ISIS in northeast Syria and at Palmyra, and it has reclaimed some of it with Russian air support. The Kurds of Iraq, supported by Kurds from Turkey and Syria and by U.S. airstrikes, have clawed back most of the territory that ISIS seized from them last year. The Shiite militias in southern Iraq, which filled the vacuum left by mass desertions from the U.S.-created Iraqi Army, with Iranian support and American air cover saved Baghdad from ISIS conquest and regained lost ground. The war requires infantry, but not American, British, and French troops. Nothing would turn Iraqis and Syrians to the jihadis more quickly than a Western invasion.

Those of us who witnessed the Iraqi uprising of 1991, when Kurds and Shiites used the demoralization of Saddam Hussein’s army in Kuwait to liberate 14 of Iraq’s 18 provinces, know that it had more potential to save the country than the American-led invasion of 2003 did. The U.S. pulled the plug on that rebellion in March 1991, and launched its own bid to control Iraq in 2003 that it is still paying for.

One step would not involve any combat at all: Close the open supply line between ISIS and the outside world through Turkey. Turkey is an ally, but no friend. Its open border with Syria is the jihadis’ lifeline. Without it, the weapons and ammunition the jihadis seized from the Iraqi Army last year would not be enough for them to defend all their territory. Without it, jihadis trained in Syria would not pass easily into Europe to murder civilians. Without the Turkish supply line, the local forces whose shared hatred of the jihadis — who include the Syrian Army, the Kurds and all of Syria’s and Iraq’s other minorities, Iraq’s majority Shiite population, secular Sunnis in Syria and Iraq, and Lebanon’s Hezbollah — would stand a better chance of defeating them. Diplomacy is better than war, and the outside powers who have been using Syria to fight their proxy wars must agree in Geneva or Vienna that enough is enough. The U.S., Russia, Iran, Turkey, Britain, France, Saudi Arabia, and Qatar have all played their parts in destroying Syria. It is up to them to end this war that has cost as many as 310,000 lives. No one is winning. No one can win. They provide their clients with the means to fight the war. And they can cut them off.

The question since March 2011, when the first protests began in Syria, is what to do with President Bashar al-Assad. The reason the West, Saudi Arabia, and Israel wanted to dispose of him had nothing to do with dictatorship or repression. Nearly all Arab governments are repressive dictatorships, but only Syria was not a U.S. satellite. Only Syria had a strategic alliance with Iran, dating to Hafez al-Assad’s decision to support Iran against Saddam Hussein in 1980, long before the West declared him a pariah. Syria supported Hezbollah in Lebanon, where it repelled Israel’s invasion in 2006. And the U.S. still had a score to settle with Hezbollah, which turned out to have staged the bombing of the Marines in 1983 and to have kidnapped American citizens like myself in the years that followed.

Last July, on this site, I wrote:

And so the jihadis did. Among the targets ISIS has hit since July have been Beirut and Paris, two cities where I lived for years and where I still have friends and family. It is only chance that spared those relatives and friends from the ISIS suicide bombings. No one can guarantee there will not be more.

And so the jihadis will again, until peace is restored to Iraq and Syria. Peace, not war, will be the downfall of the Islamic State.

Top photo: This photo released on Monday, Nov. 9, 2015 by the French Army Communications Audiovisual office (ECPAD) shows a French Mirage 2000 jet on the tarmac of an undisclosed air base.