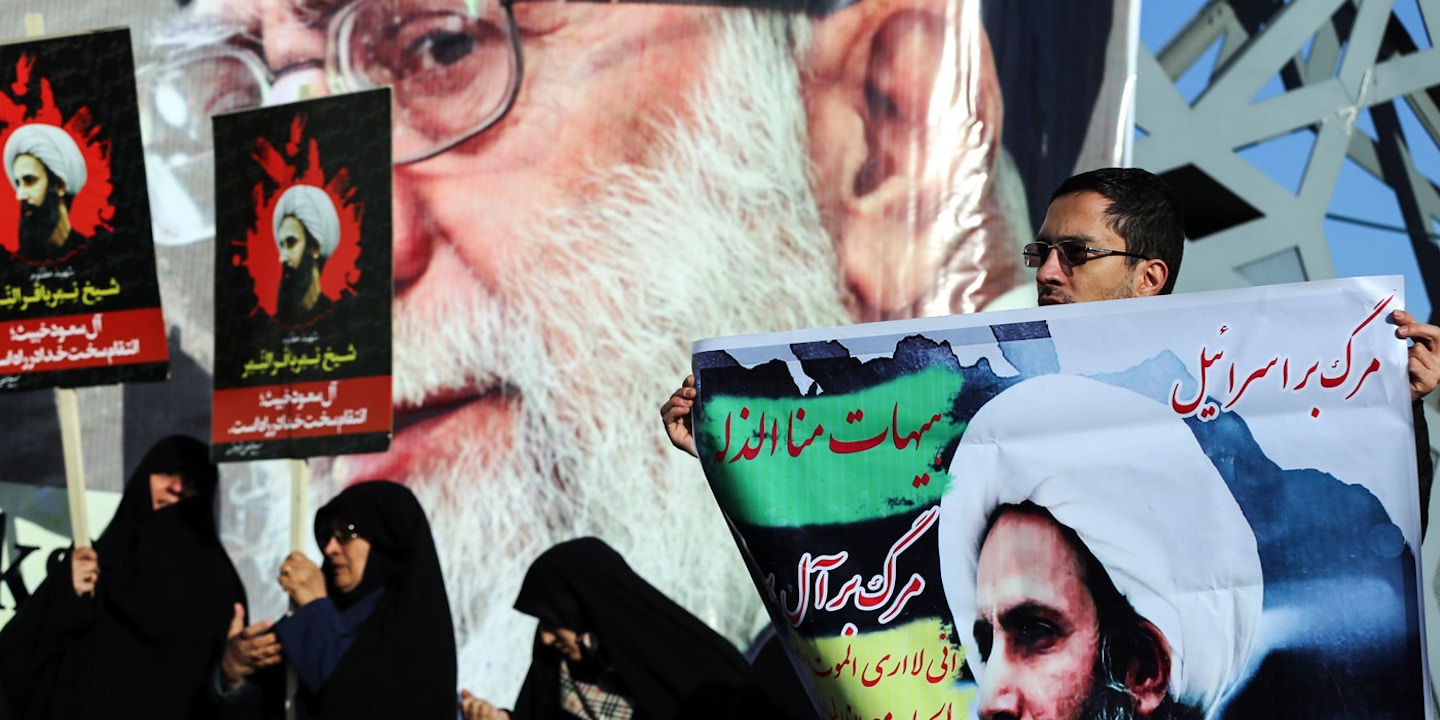 The execution led protestors in Shiite-run Iran to set fire to the Saudi Embassy in Tehran, precipitating a major diplomatic crisis between the two major powers already fighting proxy wars across the Middle East.

The Saudi side of the story is getting a particularly effective boost in the American media through pundits who are quoted justifying the execution, in many cases without mention of their funding or close affiliation with the Saudi Arabian government.

Meanwhile, social media accounts affiliated with Saudi Arabia’s American lobbyists have pushed English-language infographics, tweets, and online videos to promote a narrative that reflects the interests of the Saudi regime.

A Politico article about the rising tensions between Saudi Arabia and Iran by Nahal Toosi, for instance, quoted only three sources: the State Department, which provided a muted response to the executions; the Saudi government; and Fahad Nazer, identified as a “political analyst with JTG Inc.” Nazer defended the executions, saying that they served as a “message … aimed at Saudi Arabia’s own militants regardless of their sect.”

What Politico did not reveal was that Nazer is himself a former political analyst at the Saudi Embassy in Washington. He is currently a non-resident fellow at the Arab Gulf States Institute in Washington, a think tank formed last year that discloses that it is fully funded by the Saudi Embassy and the United Arab Emirates.

The Washington Post quoted consultant Theodore Karasik of Gulf State Analytics as saying that the “the Saudis hope to demonstrate that they are on the offensive in terms of the Sunni-Shiite divide, and they have just upped the ante on that significantly.”

Karasik is a columnist at Al Arabiya, an English-language news organization based in the UAE and owned by Middle East Broadcasting Center, a private news conglomerate that has long been financially backed by members of the Saudi royal family. Its current chairman is Sheikh Waleed bin Ibrahim, a billionaire Saudi businessman whose brother-in-law was the late King Fahd. (Al Arabiya’s coverage of the crisis is almost comically pro-Saudi, featuring headlines like “Storming embassies.. Iranian speciality.”)

An editorial published by the Wall Street Journal approvingly quoted Joseph Braude of the Foreign Policy Research Institute claiming that Nimr was a violent extremist who advocated a “military option” against Saudi Arabia. But as journalists and editors from the Christian Science Monitor, The Guardian, the BBC, and other prominent outlets have reported, Nimr advocated nonviolence and encouraged his followers to protest peacefully. Braude did not provide any evidence for his claims beyond anonymous “Saudi sources.”

Braude is a contributor to several Saudi-owned media outlets, including Al Arabiya and Al Majalla, a magazine owned by a member of the Saudi royal family. Neither of these affiliations were disclosed in the Wall Street Journal editorial. (Braude was also convicted in 2004 of attempting to smuggle 4,000-year-old artifacts looted from the Iraqi National Museum after the fall of Baghdad into the United States.)

Meanwhile, the Saudi Embassy is blasting out its message through social media.

As we have previously reported, Saudi Arabia’s lobbyists, including Qorvis and Targeted Victory, a social media company founded by Republican strategists, help to maintain a Saudi Embassy effort called Arabia Now, which puts a positive spin on all things Saudi Arabian.

Arabia Now has retweeted content from a reportedly Saudi government-run Twitter account called Infographics KSA, which produced a slick English-language video and infographic that deride Nimr as a “sedition instigator” and point to 10 years he spent abroad in Iran. On Twitter, the same account has started releasing English-language infographics defending Saudi moves to expel Iranian diplomats and bar air travel to Iran, using the hashtag #SaudiCutsTiesWithIran.

The U.S. government is obviously not eager to alienate a government that President Obama has wooed with warm words and over $90 billion in arms sales. The diplomatic offensive by Saudi-financed flacks and media has provided some space for it to provide a muted response to the execution.

In a statement issued after the executions, the State Department avoided any condemnation, simply expressing concern “that the execution of prominent Shia cleric and political activist Nimr al-Nimr risks exacerbating sectarian tensions at a time when they urgently need to be reduced.”

Top photo: Demonstrators in Tehran hold posters of Nimr al-Nimr during a protest rally against his execution by Saudi authorities.

Inside Saudi Arabia’s Campaign to Charm American Policymakers and Journalists