The American media instantly converted the invasion of Iranian waters by U.S. ships into an act of aggression by Iran, because the U.S. media establishment believes the world is owned by the U.S.

News broke last night, hours before President Obama’s State of the Union address, that two U.S. Navy ships “in the Persian Gulf” were “seized” by Iran, and the 10 sailors on board were “arrested.” The Iranian government quickly said, and even the U.S. government itself seemed to acknowledge, that these ships had entered Iranian waters without permission, and were thus inside Iranian territory when detained. CNN’s Barbara Starr, as she always does, immediately went on the air with Wolf Blitzer to read what U.S. officials told her to say: “We are told that right now, what the U.S. thinks may have happened, is that one of these small boats experienced a mechanical problem … perhaps beginning to drift. … It was at that point, the theory goes right now, that they drifted into Iranian territorial waters.” 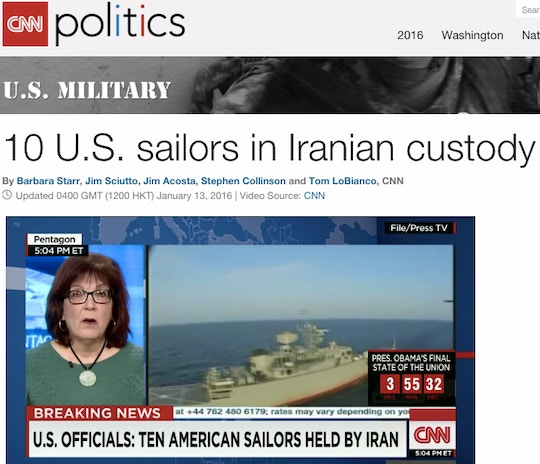 It goes without saying that every country has the right to patrol and defend its territorial waters and to intercept other nations’ military boats that enter without permission. Indeed, the White House itself last night was clear that, in its view, this was “not a hostile act by Iran” and that Iran had given assurances that the sailors would be promptly released. And this morning they were released, exactly as Iran promised they would be, after Iran said it determined the trespassing was accidental and the U.S. apologized and promised no future transgressions.

Despite all of this, most U.S. news accounts last night quickly skimmed over — or outright ignored — the rather critical fact that the U.S. ships had “drifted into” Iranian waters. Instead, all sorts of TV news personalities and U.S. establishment figures puffed out their chest and instantly donned their Tough Warrior pose to proclaim that this was an act of aggression — virtually an act of war: not by the U.S., but by Iran. They had taken our sailors “hostage,” showing yet again how menacing and untrustworthy they are. Completely typical was this instant analysis from former Clinton and Bush Middle East negotiator Aaron David Miller, now at the Woodrow Wilson International Center for Scholars:

Iran detains US sailors. Released promptly or not, a hostile act by a regime that acts w/o US cost/consequence https://t.co/0MNy0FnsjI

(Isn’t it such a mystery — given “even-handed” diplomats like this — why the U.S. failed to facilitate an Israel/Palestine peace deal and is perceived around the world as hopelessly biased toward Israel?) Miller’s proclamation — issued when almost no facts were known — was immediately re-tweeted by New York Times columnist Nick Kristof to his 1.7 million followers (amazingly, when numerous people pointed out that Miller issued this inflammatory claim without any facts whatsoever, he lashed out at critics with the condescension and limitless projection typical of U.S. establishment elites: “Twitter is an amazing vehicle: it allows instant and at times inaccurate analysis but always intemperate and ad hominem responses”; by “instant and at times inaccurate analysis,” he meant his critics, not his own fact-free claim). Nick Kristof himself then added:

Iranian hardliners have been systematically trying to undermine Rouhani and damage US-Iranian relations. Seizing sailors, that'll do it.

The truly imbecilic Joe Scarborough of MSNBC turned himself into an instant self-parody of a pseudo-tough guy compensating for all sorts of inadequacies:

Hey Iran, you have exactly 300 days left to push a US president around. Enjoy it while you can. After that, there will be hell to pay.

But, as usual, the most alarmist, jingoistic coverage came from the always-war-hungry CNN. For hours, the network emphasized in the most alarmist of tones that the sailors had been picked up by the Revolutionary Guard, which, in the words of Starr, is “one of the most aggressive elements of the military and national security apparatus in that country.” CNN host Erin Burnett intoned at the top of her prime-time show: “Next, breaking news: American sailors seized by Iran. The revolutionary guard arresting 10 American sailors in the Persian Gulf.”

For hours, CNN anchors and guests all but declared war on Iran, insisting that this behavior demonstrated how aggressive and menacing it was, while warning that this could turn into another “hostage crisis.” Immediately after her opening headline-alarm, here is how Burnett “explained” the situation to CNN viewers:

Ten American Navy sailors, nine men and one woman, seized by Iranian Revolutionary Guards in the Persian Gulf tonight. The Americans ran two boats, each equipped with three 50 caliber machine gun. Iran’s news agency announcing those sailors are under arrest. U.S. officials say the sailors were simply on a training mission traveling from Kuwait to Bahrain. It is a major embarrassment for the Obama administration coming just hours before the president will be here delivering his final State of the Union address.

Notice what’s missing? The fact that the ships had entered Iranian waters. Instead, they were “simply on a training mission traveling from Kuwait to Bahrain” when the Iranian Revolutionary Guard “seized” them. That is Baghdad Bob-level propaganda.

CNN then brought on national security reporter Jim Sciutto. Throughout the show, Burnett kept implying that Iran did this on purpose to humiliate Obama and the U.S. during his State of the Union speech: “Iran is acutely aware of important events in American politics tonight,” she told Sciutto. Only then did Sciutto mention that the ships were in Iranian waters as he gently pointed out the blatantly irrational nature of her conspiracy theory: “Who could have predicted that you would have two U.S. small Navy boats, one of which either had a mechanical problem or a navigational error that put it into Iran’s territorial waters?” He then added: “But you know, I don’t like the sound, it sounds like a cliché to say the timing, whether accidental or not, couldn’t be worse.”

CNN then brought on its White House correspondent Jim Acosta to say: “This is sort of like an October surprise right before the State of the Union Address.” The network then spoke to a former U.S. intelligence official who, citing Iran’s language, suggested that “what that means is that the Geneva Convention protections that are established by international law may not be invoked by the Iranians”: in other words, they may abuse and even torture the sailors. Former CIA operative Robert Baer warned viewers: “I’m not saying that’s going to happen, but it could be another hostage crisis, which would very much cloud this administration’s foreign policy in a very, very ugly way.” David Gergen warned that this was part of a broader trend showing Iranian aggression: “We have understood that with the nuclear agreement it not only would contain their nuclear program but they would start behaving themselves constructively. And that is exactly what they are not doing now.”

Over and over, CNN’s on-air personalities emphasized the Revolutionary Guard angle and barely acknowledged, or outright ignored, that the ships had entered Iranian waters. This was how Sciutto “reported” the event on Jake Tapper’s The Lead:

TAPPER: Jim, you have some new details on who precisely may be behind this?

JIM SCIUTTO, CNN CHIEF NATIONAL SECURITY CORRESPONDENT: This is a key detail. Iran’s state Fars News Agency is reporting that the U.S. sailors were picked up by boats from Iran’s Revolutionary Guard Corps. This is very much tied to the hard-line camp in Iran, which has, in effect, its own military, including its own navy really in the Persian Gulf, which has contested U.S. ships before, U.S. aircraft carrier a couple of weeks ago.

To be clear, that is a hard-line camp that is opposed to detente in effect with the U.S. and certainly opposed to the nuclear deal, which is meant to be implemented in the next several days. …

TAPPER: Obviously, we are praying for those 10 sailors. Thank you so much, Jim Sciutto.

Just imagine what would happen if the situation had been reversed: if two Iranian naval ships had entered U.S. waters off the East Coast of the country without permission or notice. Wolf Blitzer would have declared war within minutes; Aaron David Miller would have sprained one of his fingers madly tweeting about Iranian aggression and the need to show resolve; and Joe Scarborough would have videotaped himself throwing one of his Starbucks cups at a picture of the mullahs to show them that they cannot push America around and there “will be hell to pay.” And, needless to say, the U.S. government would have — quite rightly — detained the Iranian ships and the sailors aboard them to determine why they had entered U.S. waters (and had the government released the Iranians less than 24 hours later, the U.S. media would have compared Obama to Neville Chamberlain). But somehow, the U.S. media instantly converted the invasion of Iranian waters by U.S. ships into an act of aggression by Iran. That’s in part because the U.S. political and media establishment believes the world is owned by the United States (recall how the U.S., with a straight face, regularly condemned Iran for “interference” in Iraq even while the U.S. was occupying Iraq with 100,000 troops). Thus, the U.S. military has the absolute right to go anywhere it wants — even into Iranian waters — and it’s inherently an act of “aggression” for anyone else to resist. That was the clear premise of the bulk of the U.S. commentary last night.

The reaction is also explained in part by the permanent narrative that any countries adverse to the U.S. are inherently evil and aggressive. The U.S. is constantly depicted as a victim of Iranian aggression even as the U.S. spends more on its military than the next seven countries combined, and Iran spends less than 3 percent of what the U.S. does. The U.S.’s top ally in the region after Israel, Saudi Arabia, spends more than five times what Iran does on its military. For the last 15 years, Iran has been almost completely encircled by U.S. troops in Iraq and Afghanistan and U.S. military bases extremely close to Iranian borders. But in the tale told by the U.S. media, it’s Iran that is aggressively threatening the U.S.

But the media reaction last night is also explained by the fact that their self-assigned role in life is to instantly defend their government and demonize any governments that defy it. Even when the White House was saying it did not yet regard the Iranian conduct as an act of aggression, American journalists were insisting that it was. The U.S. does not officially have state TV; it has something much better and more effective: journalists who are nominally independent, legally free to say what they want, and voluntarily even more nationalistic and jingoistic and government-defending than U.S. government spokespeople themselves.

Top photo: A Riverine Command Boat from Costal Riverine Squadron 2 escorts the USS Bunker Hill in the Persian Gulf in 2014.