Baby Doe was 7 months old when he was added to the terror watchlist as a “known or suspected terrorist.” 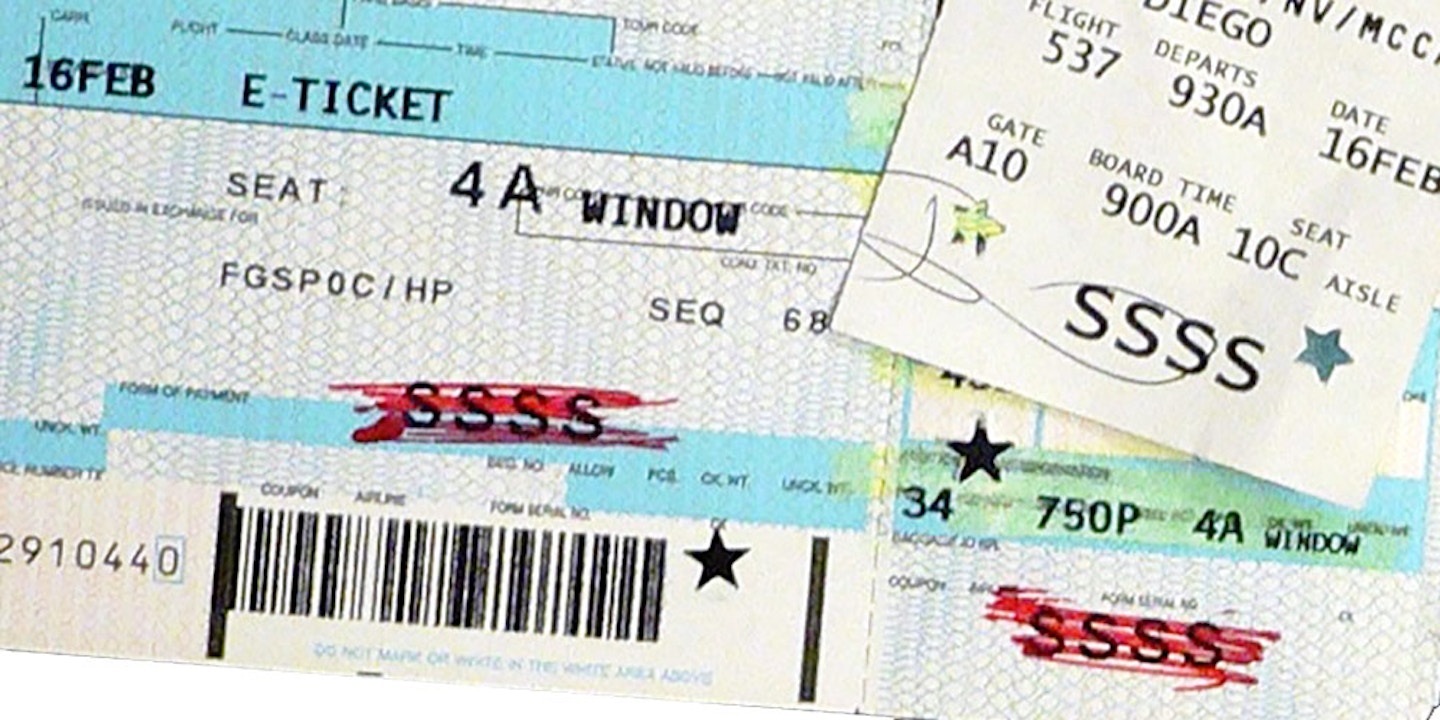 BABY DOE WAS 7 months old when his troubles with the U.S. government began. His mother was taking him on a flight when security officials stopped them at an airport. He was patted down and subjected to “chemical testing.” His mother’s bag was searched. His diapers were examined. Unbeknownst to the family from California, four letters on the infant’s boarding pass —  “SSSS” — had singled him out as a particularly dangerous class of individual: a “known or suspected terrorist.”

Four years later, Baby Doe, as he’s identified in court documents, is part of a class-action lawsuit taking aim at the federal government’s sweeping terrorist watchlisting system. His ordeal is one of 18 included in the suit, filed Tuesday in Alexandria, Virginia, by the Michigan branch of the Council of American-Islamic Relations, or CAIR. The rights group claims its plaintiffs’ collective experiences are the consequence of “an injustice of historic proportions.”

“Through extra-judicial and secret means,” the suit alleges, “the federal government is ensnaring individuals into an invisible web of consequences that are imposed indefinitely and without recourse as a result of the shockingly large federal watchlists that now include hundreds of thousands of individuals.”

Before September 11, 2001, the U.S. government had a list of 16 people prohibited from boarding flights due to suspected terrorism links. By 2013, that number had swelled to 47,000. Today, the watchlisting apparatus includes both the no-fly list and the selectee list — which triggers the enhanced airport screening Baby Doe’s family allegedly experienced — as well as other lesser-known, though much larger, secret government watchlists.

The watchlisting system has come under fire from attorneys across the country, who have blasted the procedures for secretly labeling individuals as known or suspected terrorists — “KSTs” in government parlance — as discriminatory against Muslims, arbitrary in execution, and devoid of acceptable means for legal challenge and redress. For years, the government would refuse even to acknowledge whether an individual was included on the no-fly list. Following recent rounds of litigation, the Department of Homeland Security last year instituted a policy of providing confirmation to people who believe they have been wrongly watchlisted so long as the disclosure does not endanger “national security and law enforcement interests.”

In addition to compensation for those wrongly watchlisted, the CAIR lawsuit aims to break down obstacles faced by those seeking to challenge their placement on the government’s controversial lists. The government has three weeks to respond to the suit. The FBI said it could not comment on pending litigation.

CAIR’s class action suit takes particular issue with the Terrorist Screening Database, or TSDB, the U.S. government’s central terrorism watchlist. Overseen by the FBI’s Terrorist Screening Center, the TSDB both draws from and informs a number of other government lists. In 2014, The Intercept published a set of government documents that lays out how the watchlisting process works as well as its massive scope. Among the materials was the Obama administration’s 2013 “Watchlisting Guidance,” which revealed that U.S. officials require neither “concrete facts” nor “irrefutable evidence” to secretly label an individual a known or suspected terrorist. Another document showed that nearly half the 680,000 people listed on the TSDB were described as having “no recognized terrorist group affiliation.”

The documents also revealed that more than 1 million people were included in the government’s Terrorist Identities Datamart Environment system, an expansive database drawn from intelligence community sources that feeds into the TSDB and other associated lists. Aside from legal and ethical concerns, the sheer size of the government’s multiple overlapping lists has led critics to argue that such an overwhelming amount of data makes it more difficult for law enforcement and national security officials to pinpoint risks and protect the public.

In Tuesday’s court filing, CAIR cited the documents disclosed by The Intercept as evidence of a watchlisting system gone haywire, noting that the consequences of an individual being wrongly labeled a potential threat to national security include “the unimaginable indignity and real-life danger of having their own government communicate to hundreds of thousands of federal agents, private contractors, businesses, state and local police, the captains of sea-faring vessels, and foreign governments all across the world that they are a violent menace.”

CAIR also observed that inclusion on one of the government’s terrorist watchlists can expose individuals to pressure from federal authorities to become informants in risky counterterrorism investigations. “Defendants have utilized the watchlist, not as a tool to enhance aviation and border security, but as a bludgeon to coerce American Muslims into becoming informants or forgoing the exercise of their rights, such as the right to have an attorney present during law enforcement questioning.”

The documents published by The Intercept in 2014 listed the five U.S. cities with the highest concentrations of watchlisted residents. Four of those locations — New York, Houston, San Diego, and Chicago — are cities with millions of residents. The city with the second highest concentration of watchlisted individuals, however, was Dearborn, Michigan, population 96,000, home of the largest percentage of Arab-Americans in the United States. More than half of the plaintiffs in CAIR’s lawsuit, all of whom are Muslim, reside in Michigan.

Although the lawsuit comes at time of heightened anxiety for many Muslim Americans, Dawud Walid, executive director of CAIR’s Michigan chapter, was quick to point out that pressure on Muslim communities from law enforcement and intelligence agencies has been going on for years, under both Republican and Democratic presidents.

“This type of profiling, which includes the watchlist that started under President Bush, mushroomed under a Democratic president, Mr. Obama,” Walid told The Intercept, before offering a list of grievances that spanned both presidents and ranged from the New York City Police Department’s haphazard mapping of Muslim communities, to the FBI’s use of confidential informants in American mosques, to the NSA’s surveillance of prominent Muslim Americans. “In terms of the policing of Muslim communities, it’s happened already.”

“We’re concerned about the hyperbolic rhetoric that’s coming out of the right in particular, in terms of banning immigration or banning Syrian refugees,” Walid said, “But in terms of the state of the surveillance apparatus that’s taking place right now, it’s already horrendous under President Obama.”