Bernie Sanders Did Confuse Numbers of Dead and Wounded in Gaza War, but Israel’s Mass Killing of Civilians Is a Fact

Israeli politicians railed against Bernie Sanders, even after he admitted that he misstated the number of Palestinians killed in Israel’s bombardment of Gaza in 2014. 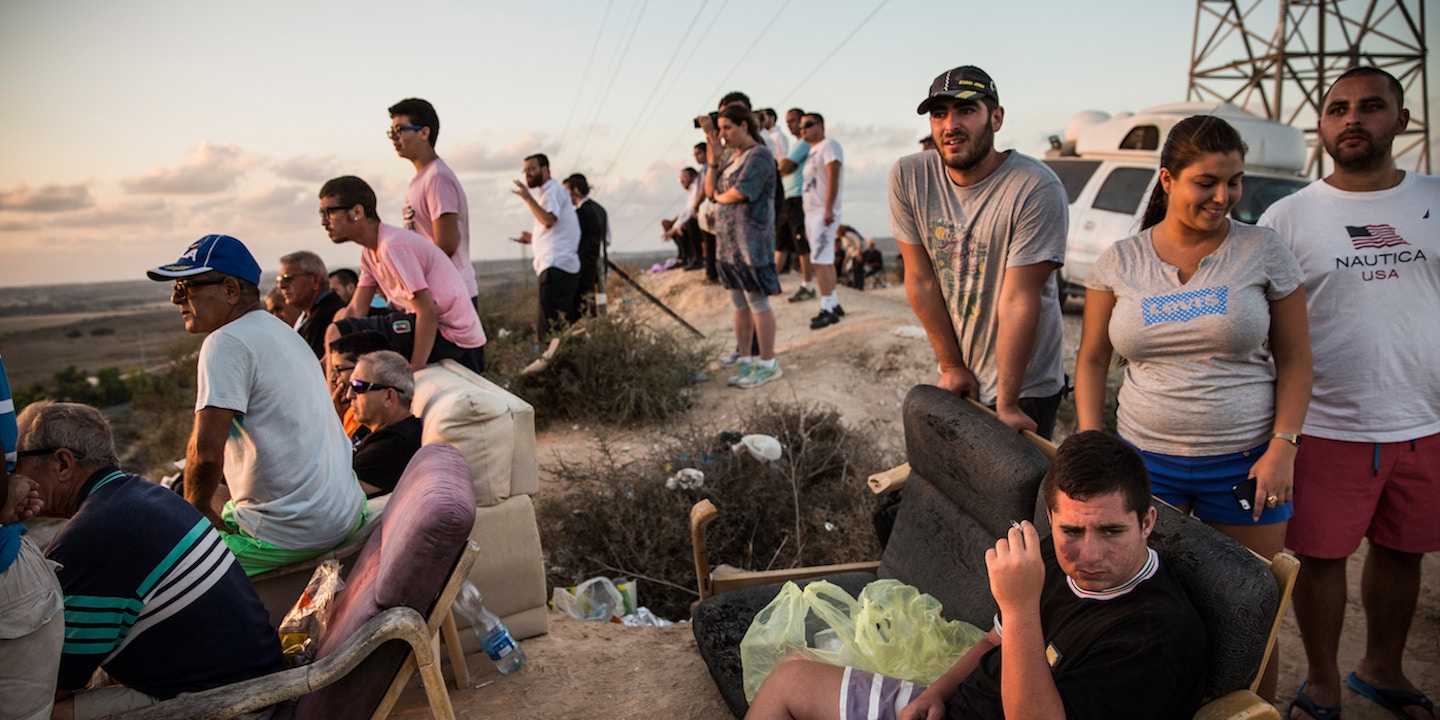 Updated | Sunday, 3:16 p.m. Israeli politicians continued to rail against Bernie Sanders on Friday, even after the candidate admitted that, in an interview with the Daily News editorial board, he did momentarily confuse the estimated number of Palestinians wounded in Israel’s bombardment of Gaza in 2014, over 10,000, with the number of civilians killed, at least 1,473, according to a United Nations count.

After Sanders told the editors of the News, “my recollection is over 10,000 innocent people were killed in Gaza,” the most blistering attack came from Michael Oren, a member of Israel’s parliament, the Knesset, who recently served as Israel’s Ambassador to the United States. Oren compared the misstatement to “a blood libel,” a term used to refer to the antisemitic myth dating to medieval Europe which held that Jews used the blood of Christian children in their rituals. He also insisted that Sanders had to apologize for spreading a false statistic that could help the Palestinian-led movement to use the economic tools of Boycotts, Divestment and Sanctions, or BDS, against Israel.

Zeev Elkin, Israel’s immigration minister, chimed in with the comparatively mild assessment that the error by Sanders was “weird and loony.”

In an opinion piece for the News on Friday, Yair Lapid, who was a member of the governing coalition’s security cabinet at the time of the Gaza offensive, then accused Sanders of helping Hamas by bolstering the Islamist militant group’s “narrative that it is the real victim.” Lapid also asserted, without offering any evidence for the claim, that “the Israeli government found most of those killed in the operation were terrorists.”

Several independent examinations of the casualties in Gaza, however, have concluded just the opposite — that at least 60 percent of the Palestinians killed in Gaza during Israel’s seven-week offensive were civilians.

One week after the conclusion of the fighting, the U.N. reported that 2,131 Palestinians had been killed in the Israeli bombardment, and of the first 1,752 cases to be verified, “1,473 are believed to be civilians, including 501 children and 257 women.” Just 279 were “members of armed groups.” At that time, 379 of the bodies had yet to be identified.

The U.N. also reported that four Israeli civilians, including one child, and 66 Israeli soldiers were killed by Palestinian militant factions during the fighting that summer.

Six months later, The Associated Press reported that its journalists had carried out a painstaking examination of the casualties from 247 Israeli airstrikes that, according to witnesses and site visits, had destroyed residential compounds in Gaza. The review found that of 844 people killed in just those strikes, 508 of the dead, over 60 percent, “were children, women and older men, all presumed to be civilians.” (This method of counting excludes anyone killed in Israel’s other 4,750 airstrikes and credible evidence that at least some of the young men killed by Israeli fire were civilians too.)

Having been attacked by Israelis who supported the Gaza offensive, Sanders was then defended by Israeli critics of the operation.

As Noam Sheizaf, a journalist in Tel Aviv, pointed out on Twitter, the hysteria in Israel seemed to be rooted in more than a dispute about exact figures, given that “we only killed 500 kids” is not great material for righteous indignation.

Make no mistake: Sanders is attacked for speaking for Gaza, not for getting his numbers wrong (is 2k, 500 kids dead OK?)

Hagai El-Ad, the director of B’Tselem, an Israeli rights group that also reported on the killing of civilians during the offensive, argued that Sanders deserved credit for talking about the killing of so many Palestinian civilians, despite having confused the numbers of the dead and wounded. El-Ad responded directly to Oren’s complaints about Sanders on Twitter.

@DrMichaelOren Better to wrongly count the thousands than to not count them at all.

M.J. Rosenberg, a critic of Israel’s ongoing siege of Gaza who once worked for the American Israel Public Affairs Committee, or AIPAC, suggested that Sanders had infuriated Israelis by raising a broader truth, that the mass killing of civilians during that operation in Gaza and others was a fact.

Indeed, a look at the transcript of his interview with the editors of the News reveals that Sanders brought up the death toll to argue that Israel’s use of force had been “indiscriminate.”

I don’t remember the figures, but my recollection is over 10,000 innocent people were killed in Gaza. Does that sound right?… I think it’s over 10,000. My understanding is that a whole lot of apartment houses were leveled. Hospitals, I think, were bombed. So yeah, I do believe and I don’t think I’m alone in believing that Israel’s force was more indiscriminate than it should have been.

These comments echoed remarks Sanders made last month in a speech laying out his Middle East policy he had intended to deliver via video link to an AIPAC conference. In that address, Sanders said that peace would require “strict adherence by both sides to the tenets of international humanitarian law. This includes Israelis ending disproportionate responses to being attacked – even though any attack on Israel is unacceptable.”

In the same speech, Sanders made it clear that he believed both sides were guilty of the indiscriminate use of force:

Of course, I strongly object to Hamas’ long held position that Israel does not have the right to exist – that is unacceptable. Of course, I strongly condemn indiscriminate rocket fire by Hamas into Israeli territory, and Hamas’ use of civilian neighborhoods to launch those attacks. I condemn the fact that Hamas diverted funds and materials for much-needed construction projects designed to improve the quality of life of the Palestinian people, and instead used those funds to construct a network of tunnels for military purposes.

However, let me also be very clear: I – along with many supporters of Israel – spoke out strongly against the Israeli counter attacks that killed nearly 1,500 civilians and wounded thousands more. I condemned the bombing of hospitals, schools and refugee camps.

In another part of the exchange with the editors of the News, Sanders — who lived on a kibbutz as a young man and has relatives who still live in Israel — criticized another aspect of Israeli policy, the building of Jewish-only settlements in the occupied West Bank, as a violation of international law. Although that has been official United States policy for decades, it is rarely stated so frankly by American politicians.

Asked if he would insist on the evacuation of settlements as president, Sanders replied: “I think if the expansion was illegal, moving into territory that was not their territory, I think withdrawal from those territories is appropriate.”

Pressed to say “who makes the call about illegality,” the candidate said: “I think that’s based on previous treaties and ideas. I happen to think that those expansions were illegal.”

During an interview with Jake Tapper of CNN on Sunday, Sanders was asked about the reaction to his comments on Gaza. He reiterated his belief that Israel’s response to attacks by Islamist militants there had been “disproportionate.”

Bernie Sanders: Was Israel's response in Gaza disproportionate? I think it was. #CNNSOTU https://t.co/poiSJPRDd7 https://t.co/0JJmv0q0nI

“Israel has a right to live in freedom, independently and in security without having to be subjected terrorist attacks,” he added, “but I think that we will not succeed to ever bring peace into that region unless we also treat the Palestinians with dignity and respect.”

When Tapper then suggested that Sanders had departed from the American political norm of full-throated support for Israel, “taking a more critical position,” Sanders replied: “I’m taking a more balanced position.”

Top Photo: Israelis gathered on a hilltop outside the town of Sderot in July, 2014, to watch the bombardment of Gaza.