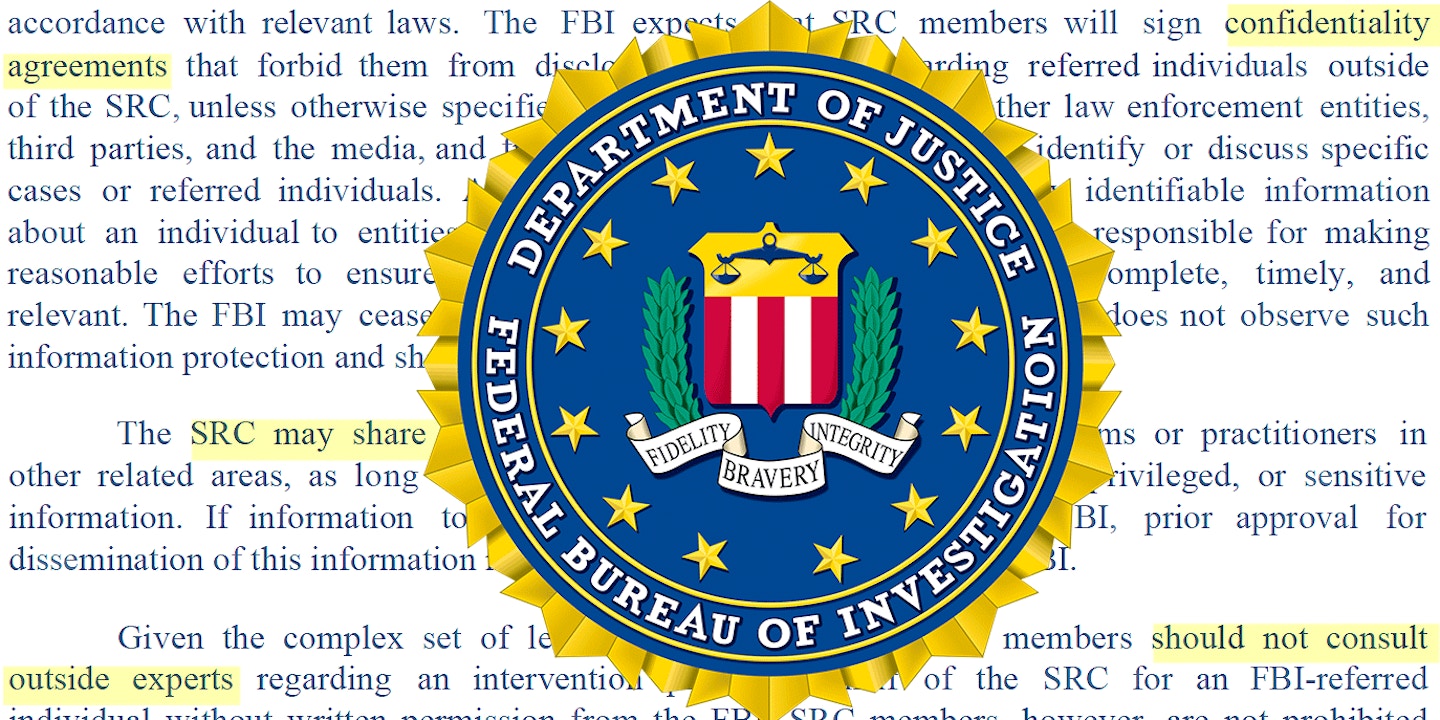 Of the plans put forward by the federal government to identify and stop budding terrorists, among the least understood are the FBI’s “Shared Responsibility Committees.”

The idea of the committees is to enlist counselors, social workers, religious figures, and other community members to intervene with people the FBI thinks are in danger of radicalizing — the sort of alternative to prosecution and jail time many experts have been clamoring for. But civil liberties groups worry the committees could become just a ruse to expand the FBI’s network of informants, and the government has refused to provide details about the program.

The Intercept has obtained a letter addressed to potential committee members from the FBI, outlining how the process would work. While the letter claims that committees will not be used “as a means to gather intelligence,” it also makes clear that information from the committees may be shared widely by the FBI, including with spy agencies and foreign governments, and that committee members can be subpoenaed for documents or called to testify in cases against the people they are trying to help. At the same time, committee members are forbidden even from seeking advice from outside experts without permission from the FBI.

The letter implies that Shared Responsibility Committees (or SRCs) would emerge organically, as “multidisciplinary groups voluntarily formed in local communities — at the initiative of the group and sometimes with the encouragement of the FBI.” The FBI would refer “potentially violent extremists” to the SRC, whose members would design an intervention plan, possibly including mental health or substance abuse treatment and help with education or housing.

According to the letter, the FBI “may or may not” inform the committee of any ongoing investigation, and law enforcement could also decide to arrest or charge the referred individual without telling the SRC. If committee members give information to the FBI, “the FBI may share any information the SRC provides with other law enforcement agencies, members of the U.S. intelligence community, and foreign government agencies as needed.”

SRC members, in contrast, must sign confidentiality agreements, and cannot consult outside experts on treatment plans. The committee members get no special legal protection, raising concerns they could be held liable if an individual they are helping turns violent as feared.

“Our society has established a number of protective zones where you’re allowed to be candid: with your doctor, your religious clergy, even to a certain extent within a school system, with student privacy laws,” said Mike German, a former FBI agent who is now a fellow at the Brennan Center for Justice. “This program that the FBI is setting up seems not to acknowledge those privileges, and in fact, seems to be intent on undermining them.”

But the letter closely echoes draft memoranda of understanding that were shown to activists in meetings with the FBI last summer and fall.

“The FBI seems to be outsourcing its intelligence gathering and surveillance to the community.”

People who attended the meetings, alarmed by what they saw as an inappropriate commingling of law enforcement with mental health and education, complained to the Justice Department, and SRCs were reportedly put on hold.

Abed Ayoub, legal director of the American-Arab Anti-Discrimination Committee, was one of those who attended the initial meetings, and has been critical of the program.

“There are many reasons why we feel the SRC program is problematic, but the main reason is that the FBI seems to be outsourcing its intelligence gathering and surveillance to the community,” Ayoub told The Intercept. “There are issues with liability and information sharing, particularly with foreign governments. But it is also troubling that the people on these committees would be ordinary civilians with little training, who may well have their own personal biases.”

Following the initial backlash, SRCs drew attention again late last month, after the ISIS attacks in Belgium, when Politico ran a piece describing SRCs as part of the “FBI’s secret Muslim network” to spot would-be terrorists. But the FBI would not give examples of groups that were part of the program nor even specify in which cities it would be tested.

In a March letter in response to questions from Rep. Bennie Thompson, D-Miss., the ranking member of the House Homeland Security Committee, a Justice Department official said that “the FBI is in the process of rolling out a limited pilot of the [SRC] concept,” in order to “assess its viability and effectiveness.”

The controversy over SRCs is part of a broader debate about other government “countering violent extremism” (or CVE) efforts and about the surveillance of Muslim communities by various law enforcement agencies.

Federal CVE initiatives in Los Angeles, Boston, and Minneapolis and St. Paul have been criticized by Muslim community groups as stigmatizing and ineffective. They have also proven divisive. In Minnesota, for example, there has been a debate within the Somali-American community over whether taking much-needed funds for youth and educational programs paints Somali youth as particularly prone to extremism.

“Like in the U.S., the program began as a voluntary arrangement between community organizations, high schools, and law enforcement. But it has since become compulsory for all public sector agencies,” said Kundnani. (A wide range of public entities, including police, schools, and local government, must “have due regard to the need to prevent people from being drawn into terrorism” under a U.K. counterterrorism law passed in July 2015. Government officials refer to the requirement as the “Prevent duty,” a reference to the Prevent anti-radicalization program to which Channel belongs.)

“In Britain, a lack of transparency has meant that questions and concerns about the program have remained unanswered,” Kundnani added. “Accordingly, there is little trust in the program at community level.”

German said one of his biggest concerns about SRCs is the secrecy surrounding their rollout.

“It’s a public-facing program, so one would think that everyone should have access to the same information,” he said. But like other CVE programs, “it seems they are being pushed to certain groups to the exclusion of others. That tends to be very divisive. It causes alienation of the ‘out’ group, and suspicion of the ‘in’ group.”

An overarching problem with CVE initiatives is that there is little evidence of a reliable set of indicators that someone is likely to become violent. As the U.N. Special Rapporteur for Counterterrorism and Human Rights stated in a recent report, “Many programs directed at radicalization are based on a simplistic understanding of the process as a fixed trajectory to violent extremism with identifiable markers along the way.”

Last year The Intercept published a questionnaire, developed by the National Counterterrorism Center, which police, social workers, and educators could use to score people based on risk factors for extremism, including poverty, depression, poor health, and isolation. Many of the indicators were highly subjective, while others were so commonplace as to be meaningless.

The FBI has its own controversial record of mixing counterterrorism and community engagement. In recent years, the American Civil Liberties Union uncovered cases in California where FBI agents attended events at mosques and Ramadan dinners and kept records on the participants. In 2009, an FBI initiative, which the FBI claims was quickly scrapped, used outreach to collect information on communities and build a “baseline profile of Somali individuals that are vulnerable to being radicalized.” And then there is the FBI’s widespread use of informants, believed to number at least 15,000 domestically. That figure, revealed in a 2008 budget request, is roughly 10 times the number of informants active during the era of J. Edgar Hoover and COINTELPRO.

More recently, the FBI previewed a website called “Don’t Be A Puppet,” which offered a series of games challenging players to spot signs of radicalization. Groups asked by the FBI to give input on the program worried that it focused heavily on Islamic terrorism and would lead to stigmatization of Arab and Muslim youth.

FBI’s Efforts in the Dark

Last fall, when Thompson, the congressman, sent a letter to the Justice Department demanding more information about the committees and other CVE initiatives, he highlighted a recent report by the 9/11 Review Commission that argued the FBI’s “fundamental law enforcement and intelligence responsibilities do not make it an appropriate vehicle for the social and prevention role in the CVE mission.”

As Thompson was likely aware, SRCs are not the FBI’s first attempt to try and intervene with potential future criminals. “The whole premise [of SRCs] is to professionalize a process that has been ad hoc for a long time,” an unnamed law enforcement official told Politico.

After the September 11 attacks, the FBI reportedly worked with “deradicalizers,” members of the Muslim-American community who helped locate and dissuade youth who had joined or were at risk for joining terror groups. The FBI’s “Behavioral Analysis Unit,” meanwhile, has worked to divert people who appear to be plotting gun violence toward counseling. This program successfully disrupted nearly 150 shootings and violent attacks in 2013, Attorney General Eric Holder has claimed. FBI Director James Comey last year said of the unit, “I have these people who spend all day long thinking dark thoughts and doing research at Quantico, my Behavioral Analysis Unit. They have an incredibly important role to play in countering violent extremism.”

This January, the FBI released a presentation on “Preventing Violent Extremism in Schools,” which notes that many schools already have teams in place to handle troubled and potentially violent youth, teams that could “expand their scope to include violent extremism-specific concerning behavior.” The model of intervention and creation of an “off-ramp” described in the presentation echoes the SRC letter, although without precisely outlining the FBI’s role.

With SRCs, “the FBI has been unclear about what the threshold would be for even opening a case against an individual,” said Hoda Hawa, director of policy and advocacy at the Muslim Public Affairs Council. “The lack of transparency has been a challenging thing to overcome. At the moment, it’s not clear why an agency tasked with arresting people would also be handling community interventions.”

Have you received one of these letters or been contacted by the FBI about SRCs? Contact reporter Cora Currier or Murtaza Hussain. Here are instructions on how to contact us securely and anonymously.