One of the greatest free speech threats in the West is now spreading on U.S. soil. One of the greatest free speech threats in the West is the growing, multi-nation campaign literally to outlaw advocacy of boycotting Israel. People get arrested in Paris — the site of the 2015 “free speech” (for Muslim critics) rally — for wearing pro-boycott T-shirts. Pro-boycott students on U.S. campuses — where the 1980s boycott of apartheid South Africa flourished — are routinely sanctioned for violating anti-discrimination policies. Canadian officials have threatened to criminally prosecute boycott advocates. British government bodies have legally barred certain types of boycott advocacy. Israel itself has outright criminalized advocacy of such boycotts. Notably, all of this has been undertaken with barely a peep from those who styled themselves free speech crusaders when it came time to defend anti-Muslim cartoons.

But now, New York’s Democratic Gov. Andrew Cuomo (above, in the 2016 Celebrate Israel Parade) has significantly escalated this free speech attack on U.S. soil, aimed at U.S. citizens. The prince of the New York political dynasty yesterday issued an executive order directing all agencies under his control to terminate any and all business with companies or organizations that support a boycott of Israel. It ensures that citizens who hold and express a particular view are punished through the denial of benefits that other citizens enjoy: a classic free speech violation (imagine if Cuomo issued an order stating that “anyone who expresses conservative viewpoints shall have all state benefits immediately terminated”).

Even more disturbing, Cuomo’s executive order requires that one of his commissioners compile “a list of institutions and companies” that — “either directly or through a parent or subsidiary” — support a boycott. That government list is then posted publicly, and the burden falls on them to prove to the state that they do not, in fact, support such a boycott. Donna Lieberman, executive director of the New York Civil Liberties Union, told The Intercept: “Whenever the government creates a blacklist based on political views it raises serious First Amendment concerns and this is no exception.” Reason’s Robby Soave denounced it today as “brazenly autocratic.”

To read the relevant provisions of Cuomo’s order is to confront the mentality of petty censoring tyranny, flavored with McCarthyite public shaming, in its purest form. See for yourself: 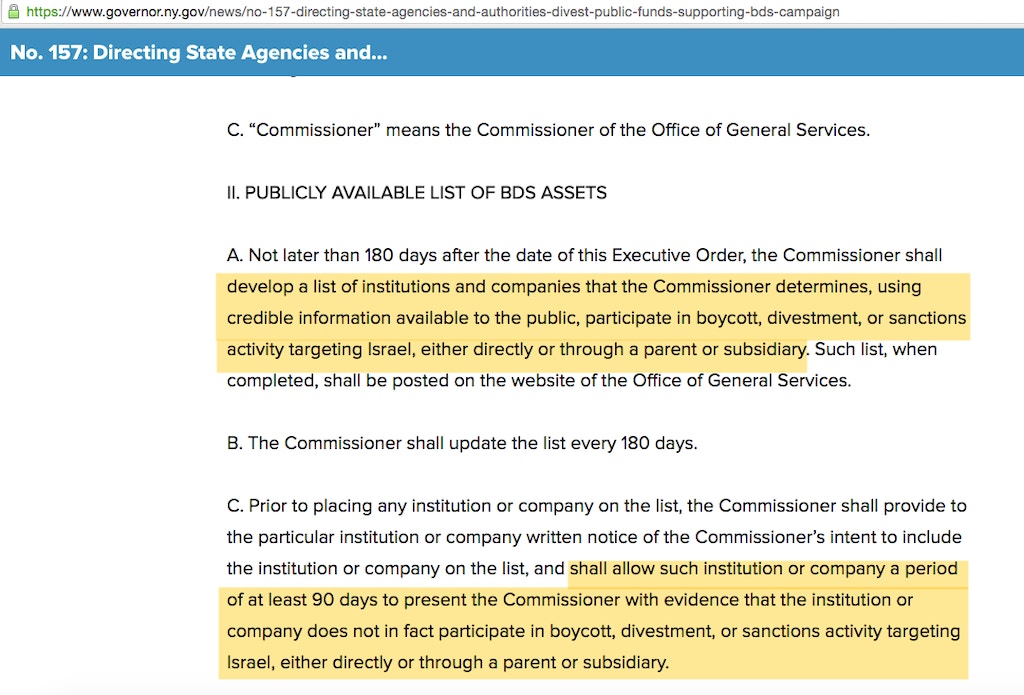 Making matters worse still is the imperious nature of Cuomo’s order. As Salon’s Ben Norton noted, “The New York legislature has unsuccessfully tried to push through anti-boycott legislation for months.” So instead, Cuomo just unilaterally decreed this punishment of boycott advocates.

New York’s Democratic Sen. Chuck Schumer wasted no time, now demanding a federal statute that tracks Cuomo’s order. Hillary Clinton, last July, wrote a public letter to her (and the Democratic Party’s) billionaire supporter, self-described Israel fanatic Haim Saban, endorsing the core principle of this censorship effort — that boycotting Israel is a form of anti-Semitism — and did so again in her March speech before AIPAC. Numerous Republicans support similar measures.

Beyond the McCarthyism and profound free speech threat, the stench of hypocrisy of Cuomo and Democrats is suffocating. Just over two months ago, Cuomo banned state officials from traveling to North Carolina in order to support the boycott against that American state in protest over its anti-transgender law. That pro-boycott executive order from Cuomo began by proclaiming that “New York state is a national leader in protecting the civil rights and liberties of all of its citizens” and thus barred “publicly funded travel” to North Carolina.

More ironic still is that Cuomo, in imposing a boycott of North Carolina, said he was doing so because in “a free society the equal rights of all citizens … must be protected and cherished” — exactly the principle that the boycott of Israel is seeking to fulfill by ending oppression and discrimination against Palestinians. But even if you disagree with the Israel boycott itself, no rational person should want Andrew Cuomo and other elected officials to have the power to dictate which political views are acceptable and which ones result in denial of state benefits.

The free speech hypocrisy on the part of all sorts of people here is obvious. In 2012, conservatives were furious when Chicago Mayor Rahm Emanuel announced that he would block the restaurant chain Chick-fil-A from expanding in the city as punishment for its owner’s anti-gay activism, depicting this move as a grave threat to free speech (a position we shared). Throughout 2015, pundits such as New York’s Jonathan Chait wrapped themselves in the free speech flag when it came time to defend racist and anti-gay speech on campus, insisting that all forms of speech, even “hate speech,” should be protected (positions we also share).

Yet now, a systematic, international campaign — fully bipartisan in the U.S. — is being implemented to abuse state resources and the force of law for a full-frontal assault on free speech and free assembly rights, and virtually none of them is objecting because it’s all in service of protecting Israel from criticism. It’s bizarre enough that someone gets elected as governor of New York and then believes it’s part of his job to shield Israel from criticism. That he does so by assaulting the free speech rights of citizens of his own country — just weeks after imposing a boycott on another American state — tells you all you need to know about the role Israel continues to play in American discourse and the willingness of people to stomp on free speech principles the moment doing so benefits their political goals.