Fears that Trump would continue to rely solely on massive amounts of free media are gone, as media execs await billions in pro-Trump money. 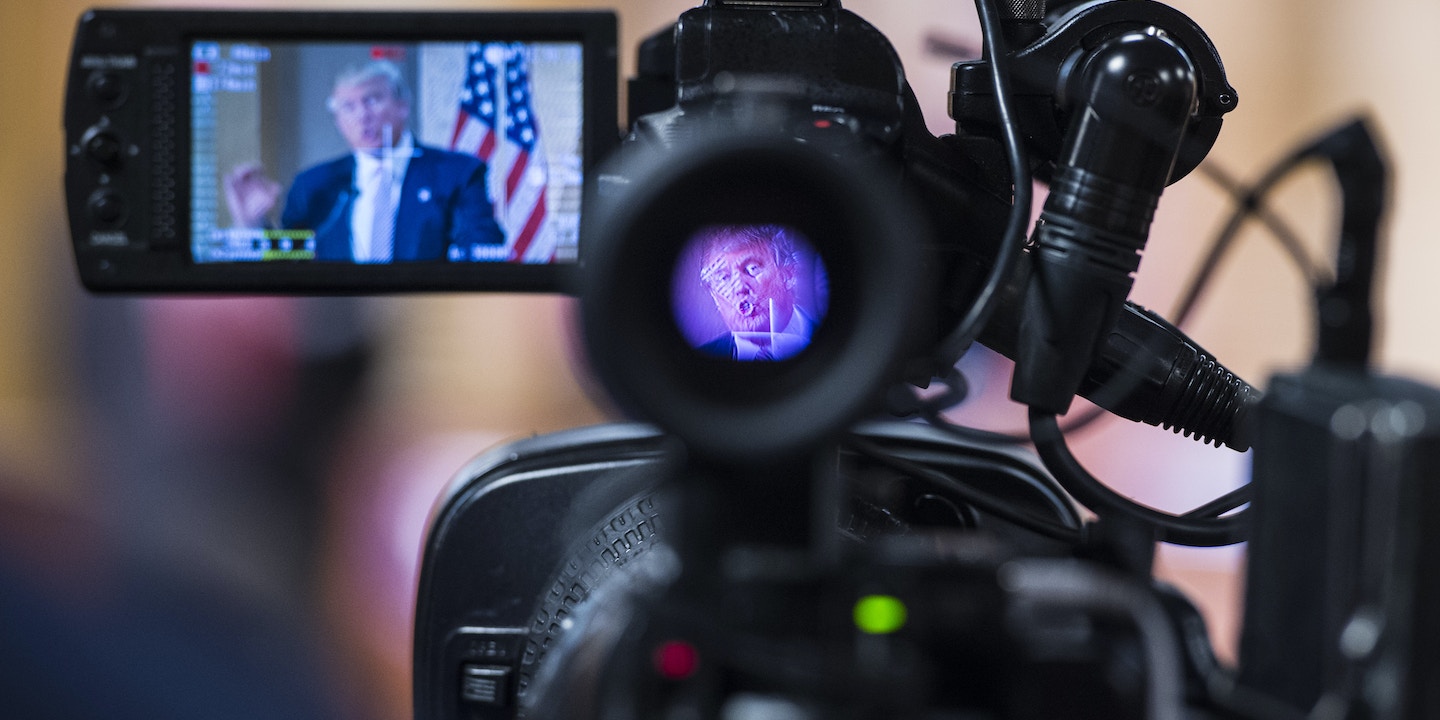 Early on, media executives in charge of much of America’s broadcasting industry were worried that Donald Trump, who eschewed traditional political advertising, might dampen prospects for a high-spending campaign season.

That fear is gone.

The Intercept reviewed the past six months of investor earnings calls and presentations of major media companies. In the first few months of this year, some executives expressed concern that Trump might continue to rely on his extraordinary free media exposure and spend less money than traditional Republican candidates. But over the last two months, the concern has dissipated and transformed into excitement that this year is on track to be the most expensive election in history.

In reviewing the transcripts, we observed no discussions during any of the calls about the media’s role in creating the Trump phenomenon, or the media’s duty to present voters with the information necessary to make informed decisions.

Indeed, Trump’s rise has been paved by nonstop, largely tabloid coverage in broadcast media that has drowned out his competitors and pushed coverage of policy issues to the margins. By March of this year, Trump had received nearly $2 billion in free media coverage, precluding the need for significant advertising spending.

Since clearing the GOP field in recent weeks, Trump has switched gears and no longer bashes big money in politics. Several conservative billionaires are reportedly backing new Super PACs that are in the works to support Trump’s general election campaign.

Last year, the expectation was that political campaigns would spend as much as $10 billion, with much of that money flowing to television, radio, and online advertisements — enriching media companies in the process.

Eddie Lazarus, the executive vice president of Tribune Media Company, which manages local television stations and local news programs, boasted during the J.P. Morgan Technology, Media and Telecom conference in late May that a matchup between Trump and Hillary Clinton would be lucrative for his company. Tribune, Lazarus noted, owns stations in the upper Midwest, thought to be a key battleground in a Trump-Clinton race.

Alfred Liggins, chief executive of Radio One, one of the largest broadcasting companies targeting the African-American community, told investors last month that “we’re actually really excited about the Hillary Clinton and Donald Trump matchup in the general election as we think our audience becomes pivotal for either candidate’s victory.”

“I know it sounds strange,” Liggins continued, “because Donald Trump has actually insulted everybody, but I believe that he has more of an affinity — African-Americans have more of an affinity towards the Trump than they would a Mitt Romney. And I think that there is going to be a real battle for our audience and the back half of the year, Q4, is when we get the bulk of our political dollars.”

Hilton Howell, chief executive of Gray Television, a company that owns television stations in 50 markets across the country, similarly assured investors during a recent call that Trump’s rise would coincide with greater political spending. Now that Trump has “practically secured the GOP’s nomination, he has announced that he intends to raise $1 billion or $2 billion for the general. We have no doubt that he can do exactly that,” Howell continued, striking a confident tone.

Brian Lawlor, head of television with E.W. Scripps Co., which owns television and ratio stations as well as digital news websites, conceded during a call with investors earlier this year that Trump “has obviously spent less right now.” Lawlor noted that “it remains to be seen” if Trump will pour his own wealth into the campaign and that he hoped “money will be in the ecosystem,” including groups “supporting or targeting Trump.”

David Amy, the executive vice president of Sinclair Broadcast Group, which owns a network of television and news stations, responded to concerns about Trump spending less than other candidates from a financial analyst during his company’s most recent investor conference call. “I would suspect that if he’s the nominee, and this is just me thinking out loud, the RNC is going to have no choice but to back him and the money will flow. The prize is too big.”

Les Moonves, the chief executive of CBS Corp., has been the most vocal enthusiast of Trump’s effect on media revenue. “The more they spend, the better it is for us and: Go Donald! Keep getting out there!” Moonves exclaimed during an event with investors last December.

Trump’s role in the campaign added negativity, nasty campaign ads, and higher ratings, he noted two months later, making Trump “good for us economically.” He added that Trump “may not be good for America, but it’s damn good for CBS, that’s all I got to say.”

While Trump does not hesitate to trash reporters who cross him, the real estate mogul loves to gush about his warm relationship with media executives. In a recent interview with the Hollywood Reporter, Trump heaped praise on the heads of Fox News, CNN, and CBS. On Moonves, Trump had this to say: “Great guy. The greatest. We’re on the same page. We think alike.”