Following the tragic deaths of five officers in Dallas during a protest against police violence, police attached a bomb to a robot ad hoc-style — detonating it and killing the gunman. 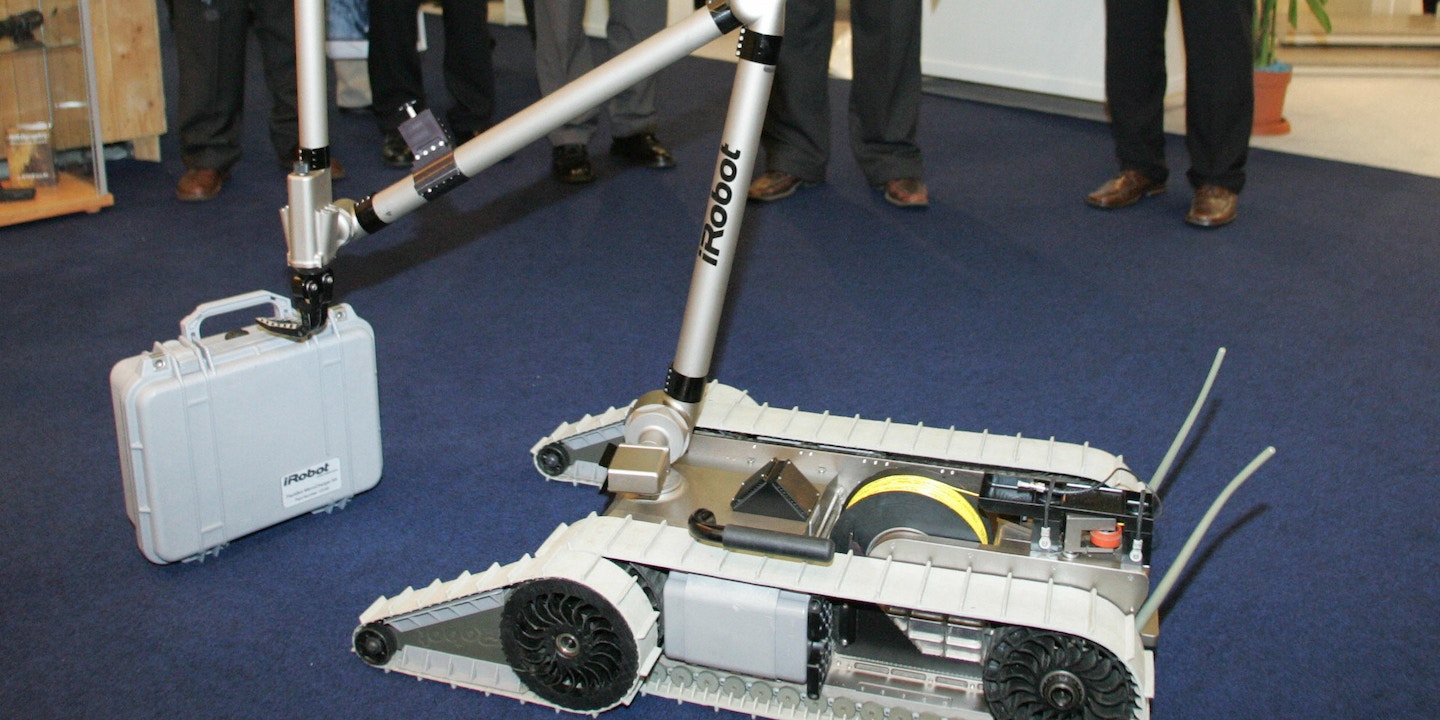 Following the tragic deaths of five police officers in Dallas, Texas, during a rally for Alton Sterling and Philando Castile on Thursday night, the Dallas Police Department deployed a small robot designed to investigate and safely discharge explosives.

Officers attached a bomb to the robot ad hoc-style — detonating it and killing the sniper while keeping the investigators out of harm’s way.

According to companies that manufacture bomb-disposal robots interviewed by The Intercept, none were aware of their bots ever being turned into lethal weapons, though one company acknowledged the robots could be adapted to hold weapons.

A spokesperson from Pedsco, a company in Canada that supplies robots to other jurisdictions in Texas, confirmed that he did not “know of any instances of an explosive used to disable a suspect” attached to a robot owned by law enforcement.

Pedsco would not comment on its own robots, citing possible confidentiality conflicts with customers, but pointed to instances where explosive ordnance disposal robots had been used offensively, such as a 1993 case where Prince George’s County Police Department deployed a water cannon attached to a robot to disarm a suspect hiding in a closet.

“The robots often have mounts that allow various tools to be used remotely, including water cannons (disruptors) and shotguns,” he continued. “The robots are designed to remotely deal with suspected packages, so remotely dealing with armed subjects would not be that much different (except that IEDs don’t move).”

Eric Ivers, the president of RoboteX, which sells robots to police departments in Texas (though not in Dallas), said that the use of a police robot to kill someone was unprecedented. “We are not aware of any robot, from any company, having been used for this purpose before,” he wrote in an email to The Intercept.

According to a presentation prepared for the Seattle Police Department in 2009, the SPD’s bomb squad uses a robot made by Northrop Grumman, the REMOTEC Andros — which the Dallas PD also owns. It costs almost $200,000, weighs 425 pounds, and is useful for “bomb call out,” “SWAT operations,” “surveillance,” and more.

The accessories and weapons listed include a 12-gauge semi-automatic shotgun, a water cannon, hooks, blades, talons, and an X-ray system.

Other robots can deploy chemical agents or shoot Tasers.

Even in the military, surveillance and safety robots are almost never used for lethal attacks. There are only a few instances reported, also improvised, according to Peter Singer, a strategist and senior fellow at the Washington-based think tank New America Foundation. “I’ve never heard of another similar police use [of bomb robots] … and it’s not established doctrine in the military at all,” he told The Intercept.

Security researchers have expressed concern that any technology haphazardly turned into a weapon escalates the concern of it being hacked.

However, companies have been selling drones and robots as multifaceted, sometimes violent tools for law enforcement for years. The Guardian reported in 2013 that one product, the “Switchblade,” had been advertised as “the ultimate assassin bug,” allowing law enforcement to pilot a small drone and then lunge it forward and kill a target.

The Dallas Police Department has refused to confirm which robot was used against the suspect on Friday morning, but several reports have noted that the city’s public records have identified prior purchases from Remotec, a Northrop Grumman subsidiary. Both Dallas police and Northrop declined to comment to The Intercept — or elucidate which types of explosives were deployed or how they were attached.