Republican Leaders Choose Their Own Future Over Donald Trump’s

Republicans have nominated the least popular presidential nominee in recent history – and it showed. 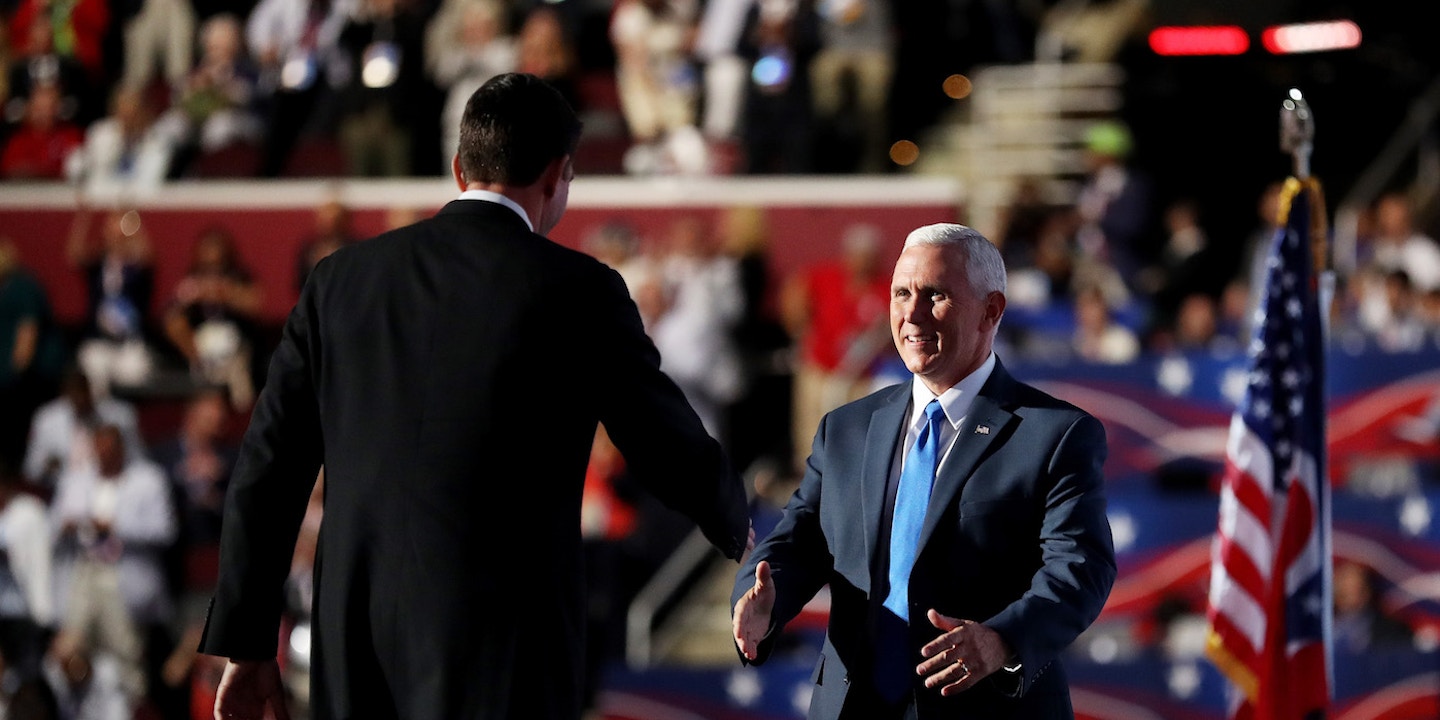 Republicans have nominated the least popular presidential nominee in recent history — and it showed. Throughout the week, the biggest names on the convention schedule consciously avoided lavishing too much praise on the nominee himself, for fear of their own political futures.

House Speaker Paul Ryan mentioned Trump just twice in his address. Wisconsin Republican Sen. Ron Johnson, locked in a tough re-election race, mentioned the nominee just once. Ted Cruz, the second-place finisher in the primary, refused to endorse Trump at all, telling attendees instead to “vote your conscience.”

And these were the Republicans who showed up to speak. Many major party figures didn’t attend at all. Arizona Republican Sen. Jeff Flake told the press he wasn’t attending because he had to mow his lawn. None of the Bushes showed up.

Rather than effusively praising Trump – a job left to group of scam artists who have attached themselves to Trump, indifferent to any long-term damage he does to the party or conservatism – the GOP pols focused on imploring members of their own party to support their own nominee. Traditionally, the convention is a time for the GOP to make its pitch to independents and disgruntled Democrats.

“If you are a conservative, a decision not to vote or to vote for a third-party candidate is a de facto vote for Hillary Clinton,” evangelical movement leader Jerry Falwell Jr. warned. His concern is not abstract: Libertarian Party candidate Gary Johnson has been picking up steam and is pulling over 10 percent in some polls.

The go-to method to rile up delegates and rally the Republican television audience was citing the threat of a Hillary Clinton victory. “In the end, this election comes down to just two names on the ballot, so let’s resolve here and now that Hillary Clinton will never become president of the United States of America,” vice presidential nominee Mike Pence told the audience.

This notable lack of enthusiasm from the party’s elder statesmen is a major break with how Republicans united behind their nominees in the past.

Take, for example, former House Speaker Dennis Hastert’s address before the 2004 convention that nominated George W. Bush, and compare it to Ryan’s.

In Ryan’s two scant mentions of Trump, he proclaimed that he would be standing next to “Vice President Mike Pence and President Donald Trump” at next year’s State of the Union address. He also told attendees that “only with Donald Trump and Mike Pence do we have a chance for a better way” — not describing what that way was, nor praising any of Trump’s policies, values, or character.

Hastert, by contrast, offered effuse praise for Bush, saying that “George W. Bush shares the hopeful vision of Lincoln and Reagan. He believes in peace through strength. He believes that the economy grows when the private sector grows, not when the government grows.” Hastert concluded his remarks by saying that “George W. Bush is a strong leader with the right vision for America.”

Ryan’s own address in 2012, when he was Mitt Romney’s vice presidential pick, is also instructive. In that speech, he specifically praised Romney’s character. “You see, some people can’t be dragged down by the usual cheap tactics, because their ability, character, and plain decency are so obvious – and ladies and gentlemen, that is Mitt Romney.”

Cruz’s non-endorsement this year also stands in contrast with his speech in 2012, where he implored voters to “Stand together with Mitt Romney and Paul Ryan. Restore the American love story.”

The reluctance to associate too closely with Trump is likely a result of the latter’s unpopularity even among traditional Republican voters and backers.

In an NBC poll taken in late June, a majority of conservative Republicans said they’d prefer someone else as the nominee. On Wednesday morning, the head of the U.S. Chamber of Commerce, the big-business lobby traditionally allied to the Republicans, refused to throw his support behind either Trump or Clinton yet.

This is a change from 2012, when Republicans had little problem uniting their voters behind nominee Mitt Romney. By April 2012, around the time Romney secured the nomination, 9 in 10 conservative Republicans said they would support Romney.

To the extent that anybody outside Trump’s immediate family was effusive about the candidate, it was speakers who were more like The Donald himself — individuals skilled in running get-rich-quick schemes to nab some fame and fortune but who have essentially no policy ideas. They were happy to endorse Trump for short-term benefit, regardless of any long-term damage it does to the party or conservatism.

Take speaker Michelle Van Etten. The Republican National Committee marketed her as a small businesswoman who “employs over 100,000 people,” but in an interview on Monday, she admitted that she actually doesn’t have any employees. Van Etten peddles pseudoscientific health products that she claims will do everything from improve your basic health to fight cancer. “This company appears to be a pyramid scheme…a world class scam,” Britt Hermes, an expert on the scam nutritional supplements industry, told The Daily Beast.

Florida Attorney General Pam Bondi and Governor Rick Scott are elected officials who praised Trump, but they both arguably belong in the scam-artist category as well.

Bondi, for instance, dropped an investigation into one of Trump’s for-profit colleges just days after the mogul wrote her campaign a $25,000 check.

Scott, who nabbed a primetime speech on Thursday, helmed hospital chain Columbia/HCA that committed some of the worst Medicare fraud in U.S. history — eventually being ordered to pay $840 million in penalties by the Department of Justice in 2000.

It wasn’t always this way. The GOP was once a party that worked much harder to address the concerns of ordinary people, was based on broad voter foundations and sustainable plans for the future, and unflinchingly supported its own presidential nominees. But for at least the next four months, it’s the party of Donald J. Trump.