Unfortunately, even with this burst of coverage, much of the reporting on the TPP misses the mark. Up until recently, cable news outlets almost completely ignored the Trans-Pacific Partnership (TPP) — the 12-nation government agreement that would dramatically expand corporate and investor rights at the expense of medical affordability, the environment, and labor rights.

The impact of this news blackout was devastating on Americans’ ability to understand what the agreement entailed. A June 2015 New York Times poll found that 78 percent of Americans said they had heard or read “not much” or “nothing at all” about the TPP.

But now that the TPP has become a major factor in the presidential campaign, that silence is finally ending.

Media Matters for America studied cable news coverage of TPP negotiations from August 1, 2013 to January 31st, 2015, and found that the agreement was mentioned just once on CNN and Fox News during that period. On MSNBC, the agreement netted 73 mentions, with all but two of those on a single program, the now-cancelled The Ed Show: 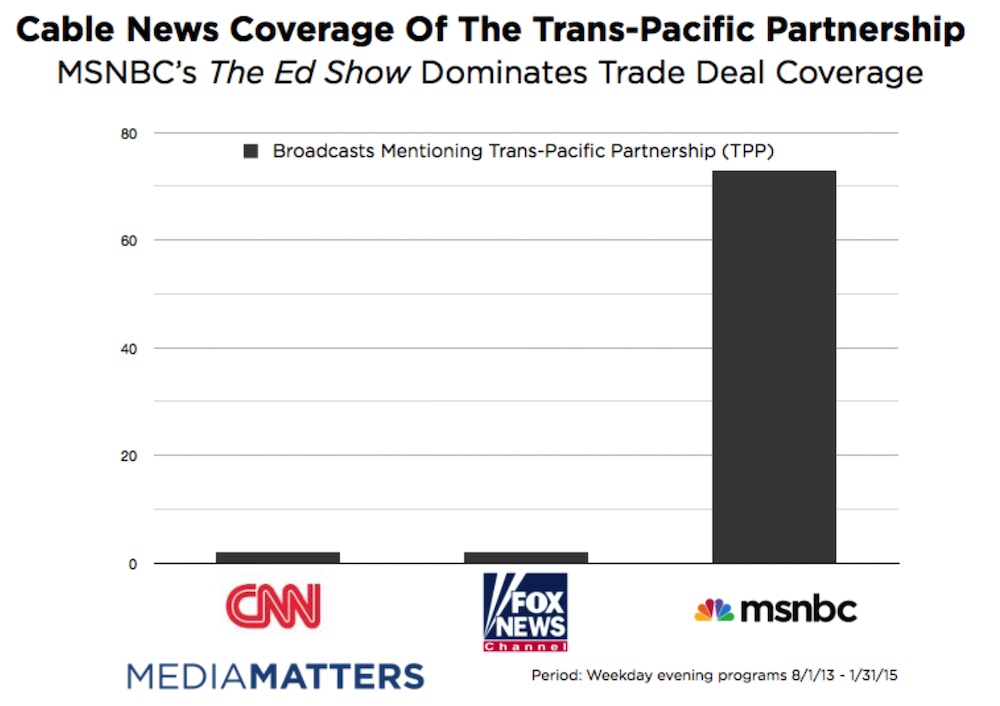 Those 18 month spanned a period of major developments in the evolution of the agreement, including several rounds of negotiation and a Wikileaks publication of a leaked intellectual property rights chapter that provided a look into how the TPP would threaten global access to medicines.

Why might major news stations ignore this consequential international agreement?

One explanation may rest in who owns these media conglomerates. For example, MSNBC’s owner, Comcast, has lobbied for the TPP. Last year, it fired host Ed Schultz, an outspoken opponent of the agreement.

But using the television transcription service TV Eyes, The Intercept found that during the month of July 2016 alone, the TPP was mentioned 455 times by CNN, Fox News, and MSNBC — about six times as often as during the entire 18-month period studied by Media Matters: This coverage largely revolved around Bernie Sanders’s insurgent efforts to unite the Democratic Party against the TPP and Donald Trump’s fiery denunciations of the agreement.

Unfortunately, even with this burst of attention, most of the reporting on the issue misses the mark. Much of it focuses on horse-race coverage of how the TPP is impacting the presidential race rather than on the substance of the agreement itself. And the mainstream media has largely accepted the Obama administration’s spin that the agreement is about increasing trade.

The reality is that the United States already has few tariffs or other trade barriers with the countries involved. The TPP is ultimately about expanding corporate rights and privileges — such as those of the conglomerates that own the major cable news networks.