Women are the fastest-growing population in U.S. jails, yet few facilities are equipped to address the specific issues that come with their detention. As incarceration rates nationwide begin to slowly fall after decades of growth, one group stands in stark opposition to the trend: women, whose imprisonment in jails is growing at alarming rates, often with devastating impacts extending to their children and families.

Jails — where individuals are held in pretrial confinement, when they fail to meet probation requirements, or simply when they cannot afford bail — have become the country’s single largest driver of mass incarceration for both men and women, with some 11 million admissions annually. And while as a whole, men in jail continue to far outnumber women, the number of women has grown 14-fold since 1970, when three-quarters of the country’s counties had not a single woman in jail. That year, women accounted for 11 percent of all arrests — but they accounted for about 26 percent in 2014.

Most available data on the incarcerated population is a couple of years old — and studies that look at gender differences in incarcerated populations are even older and limited to specific locations, when they exist at all. But based on the limited data that’s available, there are an estimated 110,000 women in more than 3,000 local jails, and despite their growing presence, jail resources continue to be mostly targeted at the male population and sometimes fail to meet even the most basic needs of women who end up behind bars almost entirely because of poverty, mental health issues, and exposure to abuse.

In a report released today by the Vera Institute of Justice and the Safety and Justice Challenge initiative — which have sought to shed a light on jails at a time when much of the conversation on criminal justice is focused on prisons — researchers attempted to compensate for a significant lack of data on who these women are and what is driving so many of them into the country’s jails. The report paints a bleak, if not completely unsurprising, picture.

“These are predominantly women of color, they are overwhelmingly poor and low income, 80 percent of them are mothers, and most of them are single mothers,” Elizabeth Swavola, one of the report’s authors, told The Intercept. “And while there isn’t a lot of data and we don’t have a complete picture, broken windows policing and the war on drugs have absolutely contributed to bringing more women into contact with the justice system: The majority of women in jail are there for property offenses, drug possession offenses, and public disorder.”

According to the Bureau of Justice Statistics, between 2010 and 2013, for example, the number of men and women decreased across all correctional populations — except for women in jail, who were up by 11 percent, and men on parole, up by 2 percent. The report found that nationwide, 64 percent of women in jail were women of color, 44 percent black, and that racial inequalities grew starkly in certain locations. In Baltimore County, for instance, 70 percent of women in jail were black.

While poverty and mental health and addiction issues also drive men to jail in large numbers, those drivers of incarceration tend to be more significant for women. Seventy-five percent of women in jail nationwide reported symptoms of mental illness in the year prior to their arrest, and a whopping 86 percent were victims of sexual violence at some point in their lives. (Incidentally, while in jail, women are also victimized at much higher rates than men: In a study carried out between 2009 and 2011, women represented 13 percent of the jail population but 67 percent of victims of staff-on-inmate sexual victimization.)

The reasons why jails are so ill-equipped to address women’s issues are often the same reasons that also make them inadequate to serve the general population — namely, a lack of mental health, addiction, family, and employment services. But for women and their families, the impact of this failure is much greater, advocates suggest.

While jails across the country are run mostly at the local and county level with no national standards or centralized monitoring system, a trend repeats itself, particularly in smaller counties: Jurisdictions with limited budgets invest most in law enforcement and public safety, and little in the social and health services that would keep most people out of jail in the first place. That’s how jails become a “catchall” for all the problems local authorities have under-invested in fixing.

“Many of these women fall through the cracks of services that are available — if any services are even available at all,” said Swavola. “There’s really a lack of community resources for these women, and the criminal justice system becomes the first respondent for them.”

But while many of the systemic failures that drive women to jail are the same that also get men there, the psychological and economic impact of a jail stay is disproportionately devastating for women and has ripple effects that often extend well beyond them. As U.S. Attorney General Loretta Lynch recently remarked, “Put simply, we know that when we incarcerate a woman we often are truly incarcerating a family, in terms of the far-reaching effect on her children, her community, and entire family network.”

While 60 percent of women in jail lack full-time employment, as opposed to 40 percent of men, and some 30 percent are on public assistance, as opposed to 8 percent of men, women are regularly the sole providers for their families. And while they are overwhelmingly incarcerated for nonviolent, property, or drug crimes that are connected to poverty (the rate of female incarceration for those offenses is 86 percent), a stay in jail will often trap them in an endless cycle of debt, as they are billed for everything from sheets and medical care in jail to supervision fees, court fees, drug testing fees, and a slew of other costs once they are released. When you consider that, for instance, about half of black and Hispanic women who arrive in jail have zero or negative net wealth, the injustice of the system becomes painfully obvious.

So far, few jurisdictions have recognized that the growing number of women they incarcerate comes with a specific set of issues — and because of jails’ decentralized nature, many fights to improve the conditions have been waged locally and with limited resources and attention, particularly in smaller and less populated counties. In Michigan, for instance, the ACLU sued Muskegon County Jail in 2014 for denying women menstrual hygiene products, toilet paper, and clean underwear — a problem reported at a number of other facilities across the country. Access to contraception and abortion has also been limited and varies widely by location.

But at a more macro level, only a few jurisdictions are considering the unique circumstances of women’s detention and addressing them specifically, and even less are approaching incarceration as the last possible resort as opposed to a routine “stopgap” for women whose low-level crimes are almost always a direct result of public policy failures. 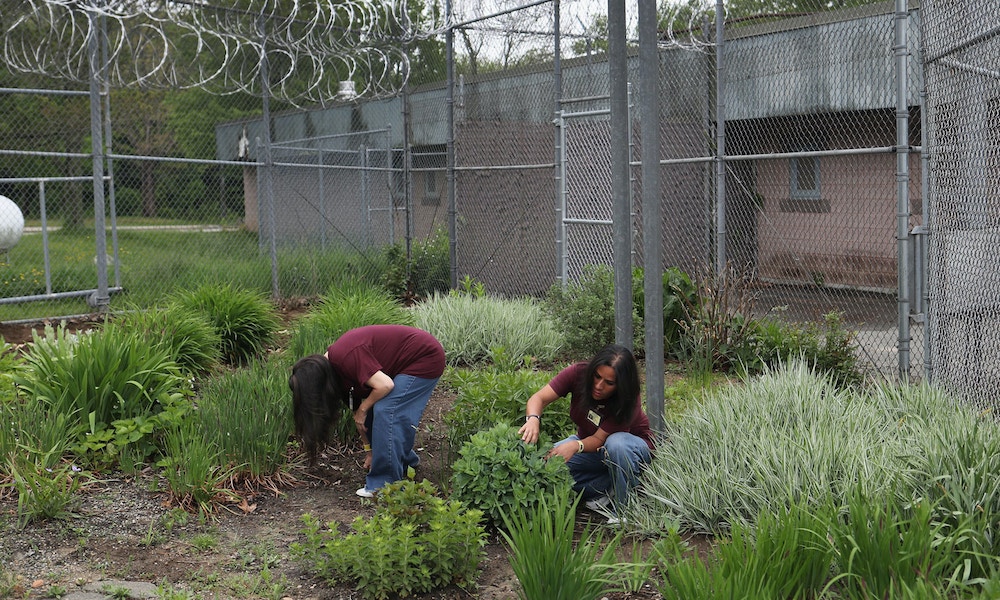 Female inmates work in the garden of the York Community Reintegration Center on May 24, 2016, in Niantic, Conn. The unit is designed to prepare prisoners for successful societal reintegration after serving out their sentences.

Reducing the number of women in jail — as with men — is a complex endeavor that should involve a number of actors in the criminal justice system: from the police who make the decision to arrest, book, and release someone, to the prosecutors who determine the extent of their charges, to the judges setting bails and sentences, to the corrections agencies working with released detainees on the implementation of their bail and parole conditions. While different jurisdictions have adopted piecemeal approaches to intervene at one stage of the chain or the other, most have failed to look at the problem comprehensively.

“Once women are in jail, their cases start moving through the system in a kind of assembly-line justice mode,” said Swavola. “There’s not a lot of consideration for who these women are or the circumstances that brought them into the system; it’s really not an individualized process.”

That individualized process is exactly what’s needed, advocates argue, and what works better to keep women from returning to jail over and over. Probation, for instance, according to the report, is the phase of the chain where many women fail to meet conditions imposed on them and are re-arrested. That’s also the phase where significant intervention, and provision of support rather than punishment, should focus, advocates argue.

Connecticut, for instance, is one of the few states that is providing differential services for jailed men and women. Probation officials there took a “team approach” to dealing with women on probation, partnering with community organizations providing health, employment, and family services, and involving them in a case-by-case plan under the lead of “gender-responsive case managers,” as officials have called probation staff who have undergone specialized training. In a pilot study of the approach, local officials found that 36 percent of women who had received this kind of multipart support system while on probation were re-arrested — as opposed to 49 percent of those who hadn’t.

These are small steps, but they may suggest a way forward, and they point to the need for resources and services that have little to do with the justice system.

“What we did is really look at how we use our community services, and our community providers, as well as the Department of Mental Health and Addiction Services, and the Department of Children and Families, and work with other agencies to support different women’s needs so that when they leave us, and while we’re working with them, they can get their needs addressed,” said Barbara Lanza, a program manager in the Connecticut Judicial Branch’s Court Support Services Division.

“[Women] are very complex and they’re involved in multiple systems,” she told The Intercept. “That makes it even more challenging. There are a lot of single moms that are the sole providers for their children; it’s very, very complex.”