Many state officials would rather spend money on legal fees than provide air conditioning to prisoners. 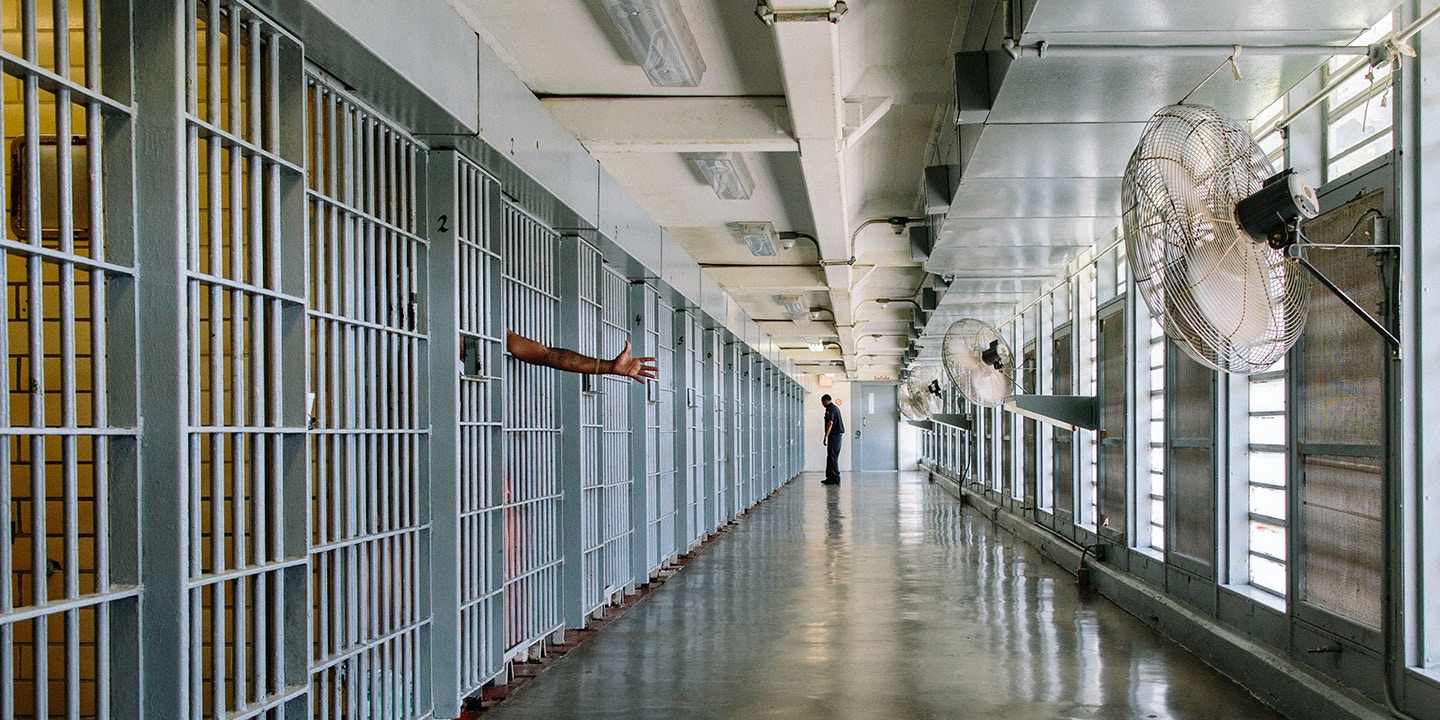 In the summer months, 84 inmates at the Price Daniel Unit, a medium-security prison four hours west of Dallas, share a 10-gallon cooler of water that’s kept locked in a common area. An inmate there can expect to receive one 8 oz. cup every four hours, according to Benny Hernandez, a man serving a 10-year sentence at the prison. The National Academy of Medicine recommends that adults drink about twice that amount under normal conditions and even more in hot climates. According to Hernandez, in the summer the temperature in his prison’s housing areas can reach an astonishing 140 degrees.

The prison provides ice for the cooler twice a day, but the ice has long melted before the hottest part of the day, he wrote in a post on Prison Writers, a website where inmates share their experiences behind bars. “Prisoners look upon the summer months in the Texas Department of Criminal Justice (TDCJ) with dread and trepidation,” he wrote. “For one is acutely aware that one may not survive another summer. Many do not.”

The TDCJ, which runs Texas prisons and houses more than 146,000 inmates, is currently in the middle of litigation over what inmates and advocates have said is deadly heat in its facilities. But Texas is not the only state facing such lawsuits. Louisiana is defending its refusal to install air conditioning on death row, while prisons and jails across the country have been ordered by courts to address their sweltering temperatures and extend protections to inmates, particularly the ill and elderly.

A spokesperson for TDCJ wrote in a statement to The Intercept that “the well-being of staff and offenders is a top priority for the agency and we remain committed to making sure that both are safe during the extreme heat.” He said that only 30 of the state’s 109 prisons have air conditioning in all inmate housing areas, because many were built before that became a common feature and retrofitting them would be “extremely expensive.” Instead, he said, the agency has taken measures like offering water and ice, restricting inmate activities, and training staff to recognize heat-related illness. The spokesperson said that inmates have “the ability to access water throughout the day” and that ice and water coolers are refilled continuously — contradicting the accounts of inmates who said that ice rations are often reduced and sometimes outright denied, that in some facilities they are given no ice or cold water for days at a time, that ice is so scarce that inmates will buy it off each other, and that inmates residing in a given cell block are given ice water to pass down the row of cells, which often leads to violence and hoarding of the vital resource.

Hernandez, the Price Daniel Unit inmate, acknowledged that prison officials there took some “precautionary measures,” like the water cooler and placing fans in common areas of the prison, but said that was hardly enough. Inmates have fans in their cells only if they can afford to buy them from the prison commissary, and “once the temperature exceeds 95 degrees Fahrenheit, the fans simply circulate hot air,” he wrote.

“It routinely feels as if one’s sitting in a convection oven being slowly cooked alive.”

In a 2014 report documenting the “deadly heat” inside Texas prisons, researchers with the University of Texas School of Law’s Human Rights Clinic found that since 2007, at least 14 inmates had died from extreme heat exposure in prisons across the state. The report documented at length the failures of prison officials to prevent heat-related injury to inmates and concluded with a series of recommendations, including frequent monitoring of inmates at higher risk and the installation of air conditioning to ensure temperatures do not exceed 85 degrees. A year later, nothing had changed, and the same researchers issued a second report condemning the “reckless indifference” of prison authorities. 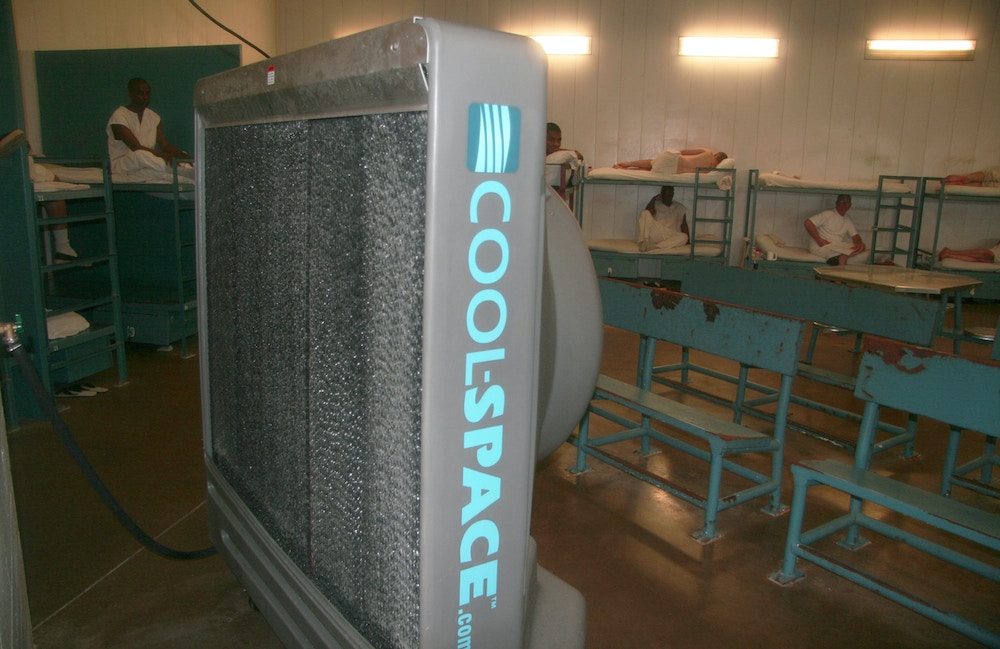 A cooling fan in a cell at the Texas Department of Criminal Justice Holliday Unit near Huntsville, Texas, June 20, 2014.

“They refuse to even acknowledge that there is a problem,” Ariel Dulitzky, director of the Human Rights Clinic, told The Intercept. “They’ll say that everybody suffers from extreme heat, that it isn’t an issue particularly affecting inmates, and that there are other people in Texas that don’t have AC either. So that’s their point, we all suffer.”

The 14 fatalities cited in the report are an extremely conservative estimate, Dulitzky noted. He and others have been fighting to obtain inmates’ death records, and based on their ages, medical conditions, and the given day’s heat index, believe that “several dozens” died at least in part as a result of extreme heat exposure in 2014 and 2015 alone.

Earlier this summer, a federal judge certified a class action after inmates at another Texas prison — the Wallace Pack Unit, which houses sick, disabled, and elderly prisoners serving time for nonviolent crimes — sued TDCJ officials in an effort to keep the temperature below 88 degrees and prevent heat-stroke deaths. Plaintiffs in that case, originally filed in 2014, described sleeping on the floor to get some relief from the heat, metal walls trapping heat “like a parked car,” and metal tables that “get so heated that prisoners have to lay towels on them to rest their elbows on.”

Fred Wallace, a 72-year-old plaintiff who is clinically obese and suffers from high blood pressure, said in a statement read by his lawyer that one day he felt he was going to pass out from the heat and asked a guard if he could go to the prison’s barber shop, a cooler area. He was denied permission.

“I felt so sick that I sat down on the floor,” he said in his testimony. “Only when the guard returned 15 minutes later and said, ‘You look like you’re going to die,’ did he allow me to enter the barber shop.”

“The only national standard is the Eighth Amendment”

“I realize that there is a small, yet vocal segment of our society that feels that prisoners deserve exactly what we are currently getting,” wrote Hernandez, the Price Daniel Unit inmate. “Unfortunately for them, the U.S. Constitution does not stop at the Texas border.”

But Texas, which has not set a maximum temperature standard for its prisons, is hardly unique. There’s no national standard for temperatures in prisons and jails, and as jurisdiction over prisons is decentralized among states and the federal system, and jurisdiction over jails is even more fragmented among thousands of local authorities across the country, fights over excessive heat in detention can only be waged facility by facility.

“The only national standard we have is the Eighth Amendment to the Constitution, which prohibits cruel and unusual punishment,” David Fathi, director of the American Civil Liberties Union National Prison Project, told The Intercept.

A spokesperson for the Bureau of Prisons confirmed that “there are not any federal regulations concerning temperature control in federal prisons,” pointing instead to “guidelines” in a Facilities Operations Manual that discuss ventilation and set target temperatures at 76 degrees in the summer and 68 in the winter. The guidelines also note that due to the facilities’ age, “occupants may experience a range of temperatures in their space that is a few degrees on either side of the targeted set point.” Those standards do not apply to state and local facilities, which can vary widely.

But while it’s true that many of the country’s facilities are old and ill-equipped, that’s no excuse for failing to provide inmates with constitutionally required safe and humane housing, critics say. And politics, more than money, is often the obstacle.

Louisiana, for instance, made headlines earlier this summer when it was revealed that the state had spent more than $1 million of public funds on legal fees in an attempt to defend its refusal to install air conditioning on death row at Angola prison — even though the air conditioning would cost only about $225,000, plus operating costs, according to expert testimony. That astonished U.S. District Judge Brian Jackson. “Is this really what the state wants to do?” Jackson asked, calling the bill “stunning.” “It just seems so unnecessary.”

Jackson declined to comment on the pending case, as did the Louisiana Department of Public Safety and Corrections. But the department’s secretary Jimmy LeBlanc told the Associated Press in June that installing air conditioning at Angola would open a “Pandora’s box.” “My biggest concern is the impact on the whole system and the cost,” he said.

Critics say the real problem is the political cost of being perceived as granting “luxuries” to prisoners.

“Part of the reason why you see this kind of irrational behavior — spending far more to fight the lawsuit than it would cost to just air-condition the prison — is because AC is seen as a luxury and prison officials don’t want to be seen as running luxurious prisons,” said Fathi. “Climate control is not a matter of comfort and luxury — it’s a matter of life or death.”

So far, the ACLU and other rights groups have been making that case one facility at a time. In Wisconsin, they won a court order to air-condition a prison where temperatures were reaching “potentially lethal levels.” In Mississippi, they won an order to provide fans, iced water, and daily showers when the heat index exceeds 90 degrees. They also secured protections for inmates more susceptible to heat-related injury at the Baltimore City Jail. In the Maricopa County jail in Arizona, run by Sheriff Joe Arpaio, the ACLU won an order that inmates on certain kinds of medication that make them more vulnerable to heat be housed in temperatures of 85 degrees or below.

“Unfortunately, because we have this very decentralized criminal justice system, you have to fight it out state by state and facility by facility” said Fathi.

“Everyone understands that if you leave a child in a car on a hot day, there’s a serious risk this child could be injured or die,” he added. “And that’s exactly what we’re doing when we leave prisoners locked in cells when the heat and humidity climb beyond a certain level.”