Obama may not have the courage to pardon Edward Snowden or Chelsea Manning, but he could at least exonerate Stephen Kim, Jeffrey Sterling, Thomas Drake, and John Kiriakou. 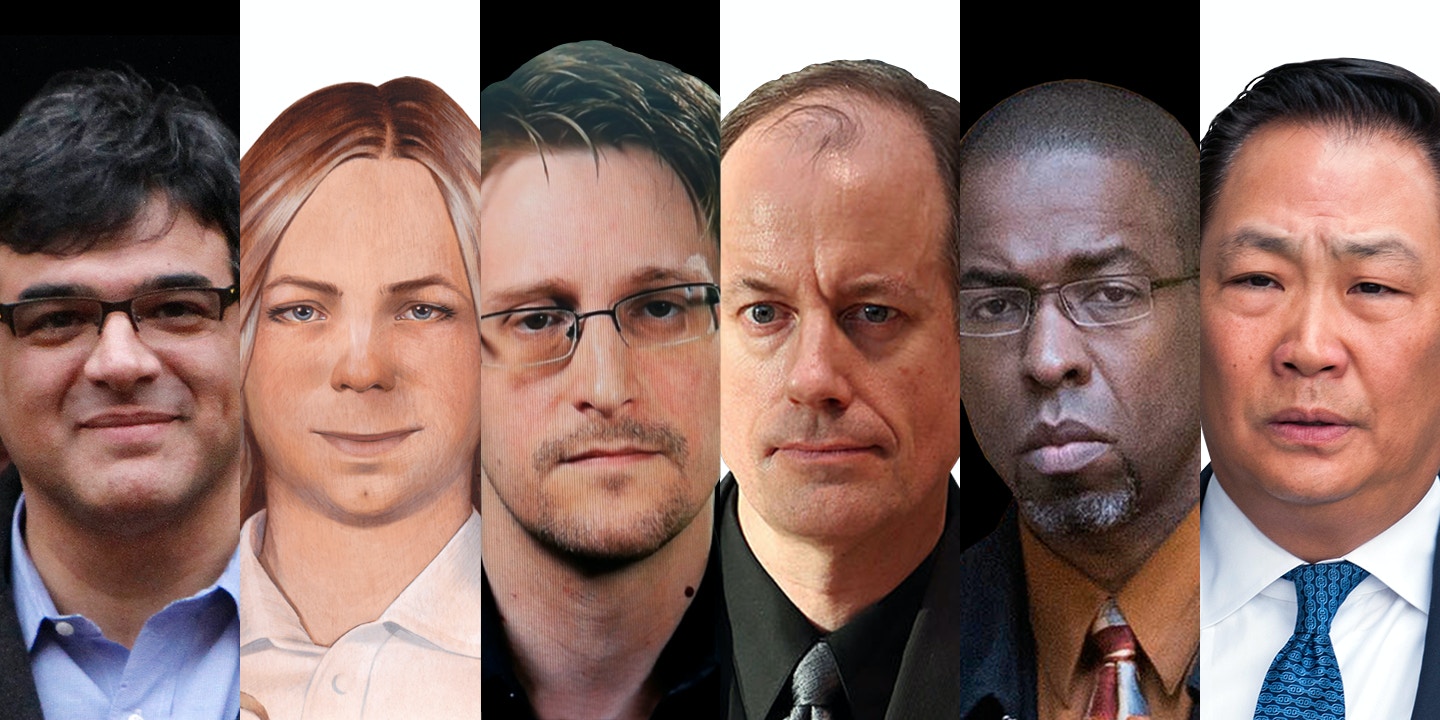 Of course President Obama should pardon Edward Snowden — and Chelsea Manning, too.

But this story is not about the excellent reasons for thanking rather than locking up the two most famous whistleblowers of the post-9/11 era. Plenty of people are already calling for that in powerful ways. A new petition on Snowden’s behalf has been signed by Twitter’s Jack Dorsey as well as Steve Wozniak, Maggie Gyllenhaal, and Aragorn (also known as Viggo Mortensen). Organizations coming out in support of a pardon for Snowden, who is currently a political refugee in Moscow, include the ACLU, Human Rights Watch, and Amnesty International. And Oliver Stone has just released “Snowden,” a movie that emphasizes his good and patriotic intentions.

But the unfortunate truth of our times is that Obama is not going to pardon Snowden and Manning. His administration has invested too much capital in demonizing them to turn back now. However, there are other leakers and whistleblowers for whom the arguments in favor of pardons are not only compelling but politically palatable, too. Their names are Stephen Kim, Jeffrey Sterling, John Kiriakou, and Thomas Drake. All of them were government officials who talked with journalists and were charged under the Espionage Act for disclosures of information that were far less consequential than the classified emails that Hillary Clinton stored on her server at home or the top-secret war diaries that David Petraeus shared with his biographer and girlfriend. Petraeus, a former general and CIA director, got a fine for his transgressions. Clinton got a presidential nomination.

Consider this: Kiriakou, a CIA agent who criticized the agency’s use of torture, was thrown into prison because he provided a journalist with the name of one covert officer, although the name was never published. Kim, a State Department official, pleaded guilty to talking to Fox News reporter James Rosen about a single classified report on North Korea that an official later described as a “nothing burger.” Sterling, a CIA officer, was convicted of talking to New York Times reporter James Risen about a botched operation against Iran that went wrong because of bungling by the agency. Drake, who worked at the NSA, faced multiple felony charges after he talked to a Baltimore Sun reporter about fraud and abuse in a bloated surveillance program. All of them went to prison except Drake, who was able, in the end, to plead guilty to a misdemeanor, though he lost his job and security clearance and now works at an Apple store.

There is an imperative to apologize to Kim, Sterling, Kiriakou, and Drake that has nothing to do with justice (though justice should be sufficient incentive). It is possible that a crackpot grifter will be elected president of the United States in seven weeks time. Obama needs to start dramatically disavowing the excesses of his presidency, so that Donald Trump, if he wins in November, will not be able to use the continuity card to do even worse things with the excessive powers that Obama was able to arrogate for the Oval Office. (Trump would still do terrible things, of course, but he would at least have a harder time citing Obama as precedent.) One of the most insidious domestic legacies of Obama’s presidency is his unprecedented crackdown on officials who talked to journalists about embarrassing issues or policies the government wanted to keep secret — and this needs to be forsaken, now.

It wouldn’t be that out of character. The Obama administration has been admirable in the use of its powers to reverse or stop wrongful actions by state and municipal authorities. Earlier this month, the administration suspended construction on the North Dakota Access Pipeline because it violated the rights of Native Americans. In recent years, the Department of Justice has conducted scathing investigations into civil rights abuses by a number of police departments, and has extracted meaningful changes from many of them. Fairness for all has been a hallmark of these laudable moves, and the same standard should be applied to leakers and whistleblowers. If Petraeus and Clinton are allowed to get away with unauthorized sharing of classified information, it should be OK for lesser officials too, especially when their actions involved the exposure of government wrongdoing.

Instead of just correcting the errors of other branches of government, Obama should admit that his own administration made a terrible mistake by prosecuting good people who helped, rather than harmed, the cause of democracy. If pardoning Snowden and Manning requires more courage than the president possesses, he can at least show clemency for Kim, Kiriakou, Drake, and Sterling, who have suffered catastrophically. Pardons would clear their names and release Sterling from prison (he remains behind bars to this day). The fact that Trump has the instincts of a dictator makes it all the more crucial that Obama not hand him the powers and policies of one.