Medics caring for injured demonstrators at the Standing Rock protests estimated that 168 people were treated for hypothermia. 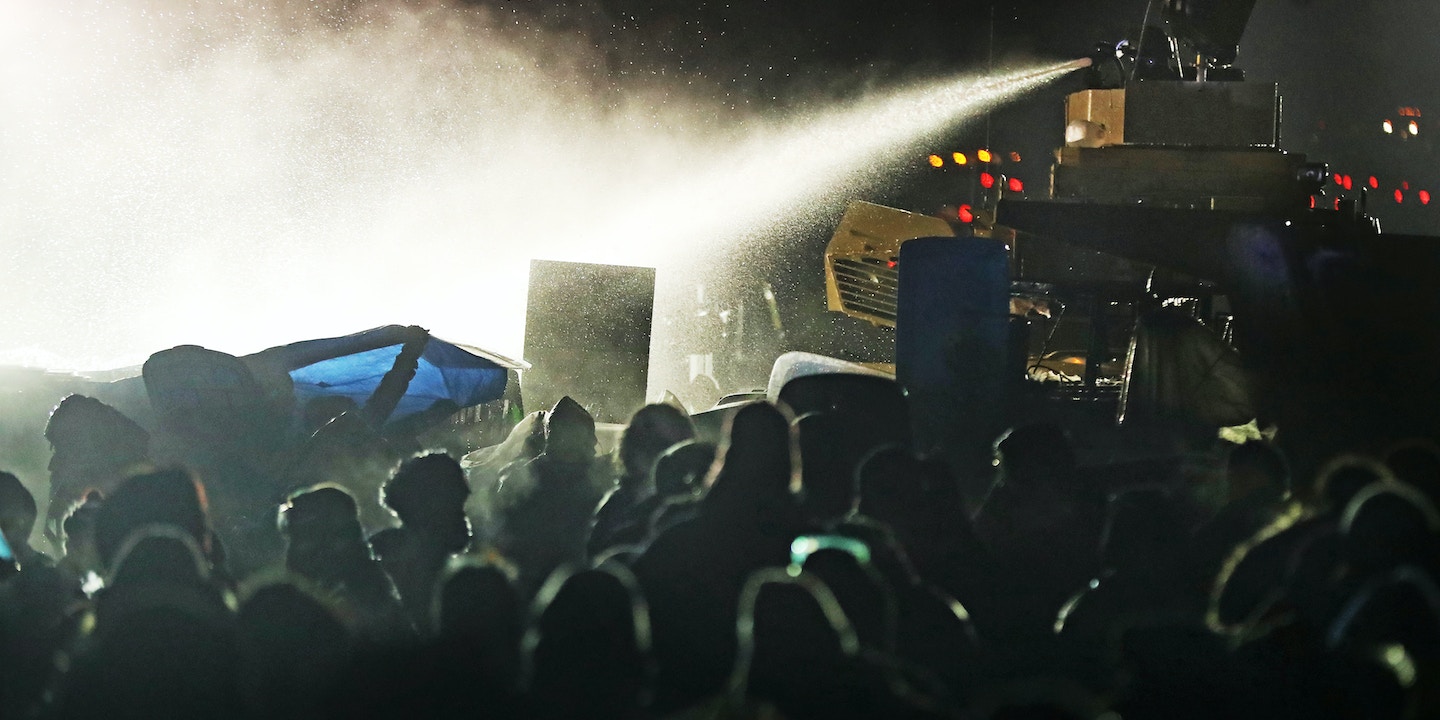 As police unleashed streams of icy water Sunday night against Dakota Access pipeline demonstrators, Linda Black Elk, a member of the Standing Rock Medic and Healer Council, was helping care for injured demonstrators. The council estimated that 300 people were treated for injuries, including 26 who were taken to area hospitals.

“What it was like was people walking through the dark of a winter North Dakota night, some of them so cold, and sprayed with water for so long, that their clothes were frozen to their body and crunching as they walked. So you could hear this crunching sound and this pop-pop-pop, and people yelling [to the police], ‘We’ll pray for you! We love you!’” Black Elk said, describing the scene as police sprayed protesters with water and fired tear gas and rubber bullets during the more than six-hour standoff.

“All of a sudden there were these bright, blinding spotlights, so you could see each other, but you couldn’t see [the police],” she said. “Every once in awhile you could hear someone scream who had been hit by a rubber bullet.”

In the midst of the clash, the Medic and Healer Council, which was set up to provide health support to those fighting the pipeline, released a statement pleading with police to halt the use of water cannons. “As medical professionals, we are concerned for the real risk of loss of life due to severe hypothermia under these conditions,” the statement said.

The standoff began after pipeline opponents attempted to use a semitruck to remove two charred military vehicles from a bridge. The vehicles were serving as a blockade between the large encampment known as Oceti Sakowin, which has served as a base for blocking the pipeline, and construction sites accessible farther down the highway. Beyond the burned-out vehicles stood cement road barriers topped with razor wire, behind which police and other security officials have been standing guard since the end of October. Their presence means a detour for those traveling between the Standing Rock Sioux reservation and the city of Bismarck, including emergency medical services.

In a statement on Sunday, the Morton County Sheriff’s Department explained the bridge closing, saying, “North Dakota Department of Transportation has closed the Backwater Bridge due to damage caused after protesters set numerous fires on the bridge October 27. In addition, the U.S. Army Corps of Engineers has requested Morton County to prevent protesters from trespassing on [U.S. Army Corps of Engineers] land north of the camp.”

According to the sheriff’s department, approximately 400 people were involved in the protest. When asked in a press conference Monday about the use of water cannons, Morton County Sheriff Kyle Kirchmeier said, “We don’t have water cannons,” explaining, “This is just a fire hose.”

“It was sprayed more as a mist, and we didn’t want to get it directly on them, but we wanted to make sure to use it as a measure to help keep everybody safe,” he said. “We’re just not going to let people and protesters in large groups come in and threaten officers. That’s not happening.”

The department characterized the protesters’ actions as “very aggressive,” saying that projectiles had been thrown at police, injuring one officer. Medics on the ground said the demonstrators they observed were unarmed and largely nonviolent. The department said it had requested additional assistance from law enforcement around the state, and that border patrol would be providing support.

Noah Morris was another medic at the scene. “They were just hosing people down with their water cannon that continued for the entirety of the four hours I was out there watching,” he said. He said that earlier in the week, the rivers and creeks nearby had started to crust over with ice. As he and his team flushed the eyes of people sprayed with tear gas, the water and milk of magnesia they used turned to black ice on the ground.

Morris said he knew of multiple people that had been hit in the head with rubber bullets or bean bag rounds. In a statement, the Medic and Healer Council described injuries including an elder who lost consciousness before being revived on site, a man who experienced a seizure, and a woman whose eye was injured when she was shot in the face by a rubber bullet.

A 21-year-old woman from New York, Sophia Wilansky, underwent surgery Monday after her arm was severely injured by a concussion grenade, according to the council.

In a statement on Tuesday, her father, Wayne Wilansky, said she would need multiple surgeries to regain functional use of her arm and hand. “All of the muscle and soft tissue between her elbow and wrist were blown away,” he said. “She will be, every day for the foreseeable future, fearful of losing her arm and hand.”

In a statement to the Los Angeles Times, the sheriff’s department denied using concussion grenades and suggested the injury was caused by explosives allegedly used by protesters. The Medic and Healer Council responded, “These statements are refuted by Sophia’s testimony, by several eyewitnesses who watched police intentionally throw concussion grenades at unarmed people, by the lack of charring of flesh at the wound site, and by the grenade pieces that have been removed from her arm in surgery and will be saved for legal proceedings.”

Some of the injured were transported to the Oceti Sakowin camp, which lies a few minutes’ walk from the demonstration site. There, thousands of people have convened in an effort to stop the Dakota Access pipeline from threatening the drinking water and cultural resources of members of the Standing Rock Sioux tribe and others living downstream. If completed, the pipeline will transport oil from the Bakken shale fields in North Dakota to a transfer point in Illinois, dipping underneath the Missouri River just to the north of the Standing Rock Sioux reservation. Tribal leaders are fighting in court to stop it, but the corporation behind the plan, Energy Transfer Partners, has argued the opportunity to reroute the pipeline has already passed. In a recent interview with the Associated Press, the company’s CEO, Kelcy Warren, declared, “There’s not another way. We’re building at that location.”

At the camp, the injured were treated inside winterized structures that have been erected alongside less-protected camping tents. Other demonstrators were taken to a nearby gym, where medics attempted to raise body temperatures with blankets and hot beverages.

Black Elk, a resident of the Standing Rock Sioux reservation, has been involved in the fight against the pipeline since last February, when community members first learned of plans to build it. She’s an ethnobotanist and instructor at the local Sitting Bull College and has served as a cultural liaison for the Medic and Healer Council. She said she’s seen police reactions to the protests become “progressively more militant, more violent.”

Morris recalled a protest at the end of the summer when police provided water to a thirsty protester who was attached to construction equipment. He says things have changed since then.

“We are standing back in a state of disbelief,” said Jesse Lopez, a surgeon based in Kansas City, who has traveled to North Dakota multiple times to support the Medic and Healer Council. “I maybe could see pepper spray, maybe rubber bullets, maybe tear gas, but water cannons? That’s done to inflict deliberate, severe, life-threatening harm.”

Update: November 22, 2016
This piece was updated to include details of Sophia Wilansky’s injuries.