Macedonian teens and Russian propagandists have been blamed for the scourge of “fake news,” but much originated from shady sites tied to Donald Trump allies, like Laura Ingraham’s LifeZette.

The extraordinary phenomenon of fake news spread by Facebook and other social media during the 2016 presidential election has been largely portrayed as a lucky break for Donald Trump.

By that reckoning, entrepreneurial Macedonian teenagers, opportunists in Tbilisi and California millennials have exploited social media algorithms in order to make money — only incidentally leading to the viral proliferation of mostly anti-Clinton and anti-Obama hoaxes and conspiracy theories that thrilled many Trump supporters. The Washington Post published a shoddy report on Thursday alleging that Russian state-sponsored propagandists were seeking to promote Trump through fabricated stories for their own reasons, independent of the candidate himself.

But a closer look reveals that some of the biggest fake news providers were run by experienced political operators well within the orbit of Donald Trump’s political advisers and consultants.

Laura Ingraham, a close Trump ally currently under consideration to be Trump’s White House press secretary, owns an online publisher called Ingraham Media Group that runs a number of sites, including LifeZette, a news site that frequently posts articles of dubious veracity. One video produced by LifeZette this summer, ominously titled “Clinton Body Count,” promoted a conspiracy theory that the Clinton family had some role in the plane crash death of John F. Kennedy, Jr., as well as the deaths of various friends and Democrats. 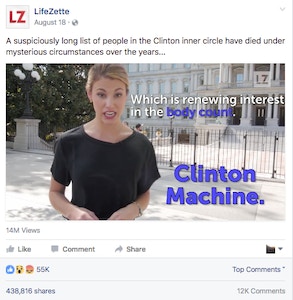 One LifeZette article misleadingly claimed that the United Nations backed a “secret” Obama administration takeover of local police departments. The article referenced Justice Department orders that a select few police departments address patterns of misconduct, a practice that, in reality, long predates the Obama presidency, is hardly secret, and had no relation to the United Nations.

Another LifeZette article, which went viral in the week prior to the election, falsely claimed that Wikileaks had revealed that a senior Hillary Clinton campaign official had engaged in occult rituals. Ingraham’s site regularly receives links from the Drudge Report and other powerful drivers of Internet traffic.

But LifeZette, for all its influence, pales in comparison to the sites run by Floyd Brown, a Republican consultant close to Trump’s inner circle of advisers. Brown gained notoriety nearly three decades ago for his role in helping to produce the “Willie Horton” campaign advertisement, a spot criticized for its use of racial messaging to derail Michael Dukakis’s presidential bid. Brown is also the political mentor of David Bossie, an operative who went to work for Trump’s presidential campaign this year after founding the Citizens United group. In an interview this year, Brown called Trump campaign manager Kellyanne Conway a “longtime friend.”

Brown now produces a flow of reliably pro-Trump Internet content through a company he co-owns with his family called Liftable Media Inc., which operates a number of high-impact, tabloid-style news outlets that exploded in size over the course of the election. One of Brown’s sites, Western Journalism, is the 81st largest site in the U.S. with 13 million monthly unique monthly visitors, according to rankings maintained by the site Alexa. Another, called Conservative Tribune, is the 50th largest site with over 19 million monthly unique visitors. Liftable Media is run on a day to day basis by Brown’s son, Patrick, who is the president of Liftable Media. 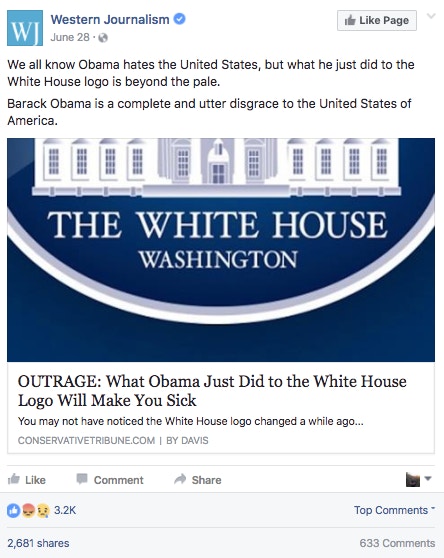 Brown’s sites churn out bombastic headlines with little regard to the truth. One viral piece shared by Brown’s news outlets claimed that President Obama had redesigned the White House logo to change the American flag to a white flag, “a common symbol for surrender, which has many people wondering if Obama was trying to secretly signal to America’s enemies that he was surrendering.” The Facebook post touted the article with the line, “We all know Obama hates the United States, but what he just did to the White House logo is beyond the pale.”

As the fact-checking website Snopes was quick to note, it was no signal of surrender and the bleached white version of the White House logo, complete with a white flag, was not even an Obama creation. The white logo dates back to as early as 2003, under the Bush administration, which used it for official documents.

“BREAKING: Muslims Ordered to Vote Hillary,” is the headline for one election post that grossly mischaracterized a mundane article about a Pakistani American activist going to door to door to help Clinton’s campaign. “Obama Urges Illegal Immigrants to Vote Without Fear of Getting Caught,” blared Western Journalism, claiming that President Obama had suggested in an interview on issues facing Latino millennial voters that noncitizens could vote and “will never get caught if they do.” The article left out the part of the Obama interview in which he said noncitizens “can’t legally vote, but they’re counting on you to make sure that you have the courage to make your voice heard.”

The hits go on, with posts on a regular basis making claims ranging from the assertion that Clinton went on a “drug holiday” before the Las Vegas presidential debate to rumors that Obama’s birth certificate is under serious scrutiny.

Thanks to views sourced largely to referrals from Facebook, Brown’s websites now outrank web traffic going to news outlets such as the Wall Street Journal, CBS News, and NPR, according to data compiled by Alexa. Both Western Journalism and Conservative Tribune are certified by Facebook as bonafide news providers.

Trump’s relationship with one particularly influential online news site with a history of fabricated stories couldn’t be much closer. Steve Bannon, the chairman of Breitbart News, took a leave of absence from the organization to become the chief executive officer of Trump’s presidential campaign and has been tapped to serve as Trump’s chief strategist in the White House. Trump himself regularly promoted Breitbart stories, including a tweet used to justify his campaign to prove Obama was not born in the U.S.

Breitbart News blends commentary and journalism with inflammatory headlines, in many cases producing fake stories sourced from online hoaxes. The site once attempted to pass off a picture of people in Cleveland celebrating the Cavaliers as a massive Trump rally. The site furiously defended Trump’s false claim that “thousands” of Muslims in New Jersey were “cheering” the 9/11 attacks, a claim that multiple fact-checking organizations have thoroughly debunked.

The surge of fake news has been much commented on in the mainstream media — and its effect on Trump’s election victory has been widely debated — with little mention of the purveyors close to the Trump campaign.

A Buzzfeed News article that came out shortly before the election famously traced more than 100 pro-Trump websites to young entrepreneurs in a single town in the former Yugoslav Republic of Macedonia, who discovered that the best way to generate clicks — at a fraction of a penny per click in ad revenue — is to get their politics stories to spread on Facebook. After the election, New Yorker editor David Remnick described President Obama as “talking obsessively” about that article, and quoted him bemoaning its significance. “[T]he capacity to disseminate misinformation, wild conspiracy theories, to paint the opposition in wildly negative light without any rebuttal, ” Obama said, “that has accelerated in ways that much more sharply polarize the electorate and make it very difficult to have a common conversation.”

The Washington Post interviewed Paul Horner, the “impresario of a Facebook fake-news empire,” who sounded somewhat aghast when he said, “I think Trump is in the White House because of me. His followers don’t fact-check anything — they’ll post everything, believe anything.”

Another Washington Post story described two Southern California slackers turning their website of made-up pro-Trump clickbait in a virtual goldmine. The New York Times profiled a fake news operation run by three brothers in Tbilisi, Georgia, who experimented with a variety of content, sometimes lifted from other sites, at other times made up from whole cloth, finding that pro-Trump material was the most popular, and therefore the most profitable.

Finally, a Washington Post story this week alleged a Russian government role in spreading fake news to help Trump. But its sources were not remotely credible. For instance, it cited a list that characterized as “routine peddlers of Russian propaganda” a number of well-established and well-respected websites including Truthdig, a site published by award-winning journalist and long-time Los Angeles Times columnist Robert Scheer, Naked Capitalism, and Truth Out.

The growth of fake news isn’t confined to Trump or to conservative sites. A number of left-wing political sites have trafficked in demonstrably false stories, including deceptive pieces stoking fear about vaccines. Earlier this year, when critics called for Clinton to release the transcripts of her three paid speeches to Goldman Sachs, as well as to other interest groups, Daily News Bin, a new liberal website specializing in viral hits, published a piece titled, “Video surfaces of Hillary Clinton’s paid speech to Goldman Sachs, and it’s completely harmless.” The video embedded in the piece, however, was not one of Clinton’s paid speeches; it was a public event sponsored by Goldman Sachs. The article was shared over 120,000 times.

“We live in a time when people don’t care about facts,” said Judy Muller, professor of journalism at the University of Southern California.

Facebook has responded to the recent outcry over fake news websites with promises to crack down on obvious phony sites. Many critics are still worried that Facebook is not doing enough to counter outright lies promoted by the platform; meanwhile, others are concerned that such efforts risk suppressing critical information.

Muller said that if Ingraham is nominated by Trump to be his spokesperson to the press, she will have to distance herself from her growing Facebook content empire.

But the demand for fake news is unlikely to subside.

“People only care about opinions that support their own biases,” said Muller. “So they’re not reading other people’s facts, they’re not checking the facts, and they don’t want to know — and that’s the scariest development to me.”