Lora Ries’s selection is the latest evidence that Trump is preparing to fulfill his pledge to step up deportations. 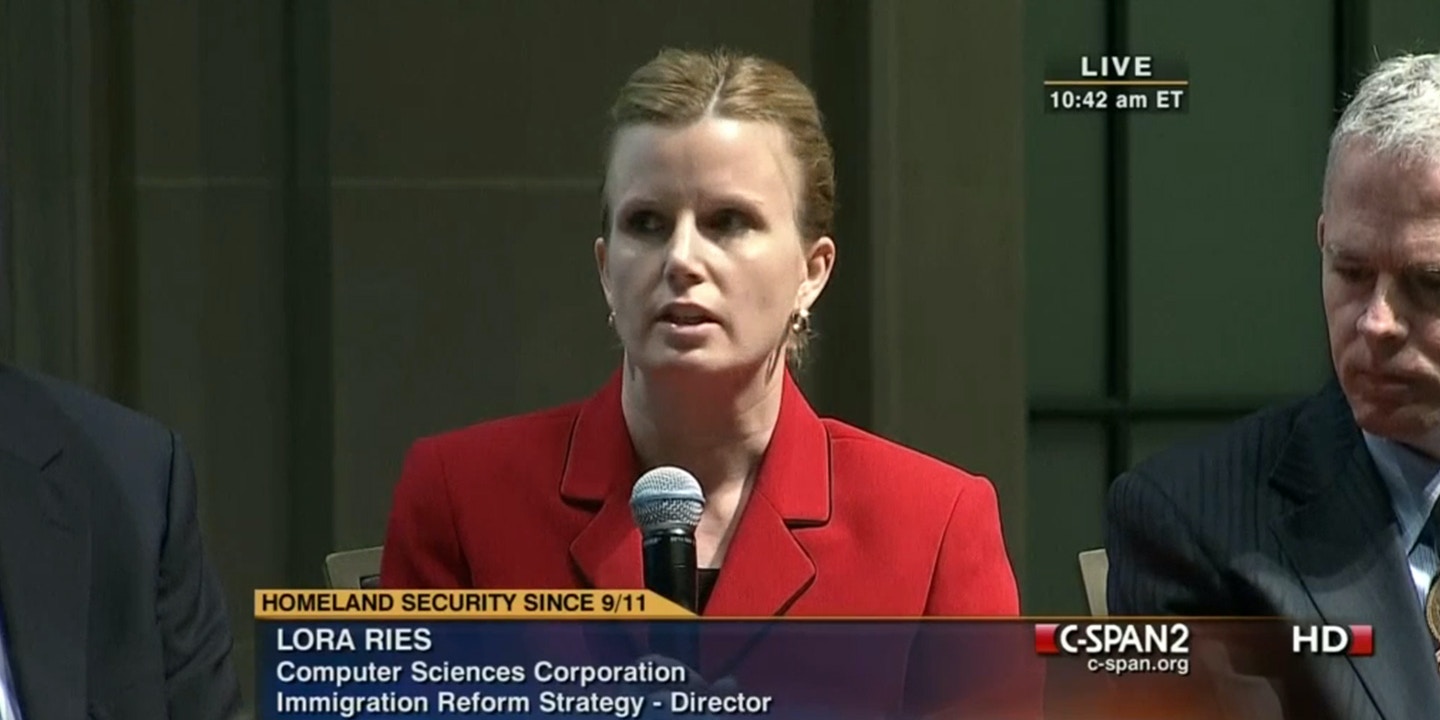 Behind the corinthian columns of the U.S. Chamber of Commerce, the country’s premiere corporate advocacy association, talk of a crackdown on immigrants takes a clinical tone, far different from the bombastic rhetoric found on talk radio or at a Donald Trump campaign rally.

Lora Ries, speaking at a Chamber conference in 2011 on national security and immigration, spoke calmly about the need for a vast expansion of immigration enforcement. And rather than simply securing the borders, the government should “focus on interior enforcement so that there are those routine consequences,” she said. The government should integrate databases and step up the criminal penalties for those in the country without documentation. After all, she noted, we must “remove the hay to expose the needles.”

Ries, a longtime lobbyist for a variety of homeland security contractors, is one of the latest hires by the Trump transition to remake the Department of Homeland Security.

Her selection is the latest evidence that Trump is preparing to fulfill his pledge to step up deportations.

Ries began her career in government, serving as an official with the U.S. Immigration and Customs Enforcement (ICE) and as a Republican counsel to the House Subcommittee on Immigration and Border Security. But for much of the last decade, Ries has moved through the revolving door as a lobbyist for the contractors profiting from harsh immigration policies.

Her current employer is CSRA International, a massive federal information technology contractor that, among other things, sells the GangNet software that underpins gang databases maintained by 13 states, ICE, the FBI and ATF.

Disclosure documents show that in 2008, Ries lobbied on behalf of USIS, a company that provided background checks for the federal government, on its work for the controversial Secure Communities program. Secure Communities, developed in 2008 under President George Bush as a partnership between federal and local law enforcement, compelled local police to share arrestees’ fingerprints with federal immigration officials, a move designed to initiative deportation proceedings.

The program was criticized for its role in deputizing local police as immigration officials, and for driving undocumented communities underground for fear that even reporting a crime to the police could lead to being turned over to ICE. In 2014, President Obama replaced Secure Communities with the Priority Enforcement Program, an effective rebranding strategy that kept many of the same enforcement priorities regarding undocumented migrants with criminal records. The measure was announced alongside the intended carrot of immigration relief in the form of executive action to allow the parents of permanent residents, as well as minors who entered the country, an opportunity to apply for deferred action in order to prevent deportation. The program for parents was blocked this year by a federal court.

The role of private contractors such as USIS in spearheading the program has received little scrutiny. LinkedIn pages for several former analysts for the firm working on the program provide some clues. One analyst employed by USIS to work on Secure Communities said he “analyzed the immigration status and criminal history of all non-US citizens arrested in the jurisdictions that participated in this program” and “helped prioritize the removal of those individuals who posed the greatest risk to public safety.”

USIS, notably, lost a lucrative contract with the federal government last year after it was revealed that firm frequently submitted fraudulent background investigative work to its government clients, including the Office of Personnel Management, that was the victim of a massive hack involving millions of government personnel records in June 2015. The firm was also the same company that performed the background check on National Security Agency whistleblower Edward Snowden. Last year, after losing its contract, Altegrity, the USIS parent company, filed for bankruptcy protection.

She went on to work for Computer Sciences Corporation, helping to lead the firm’s immigration and security work with the government. CSC, known widely for its work on behalf of the military, also provides contract solutions to immigration-related government agencies. In 2011, the firm landed a $67 million contract to maintain the U.S. Citizenship and Immigration Services’ system for E-Verify, the program to allow businesses to verify the eligibility of new employees.

“Criminals and terrorists hide by blending in with ordinary people engaged in everyday, lawful activities,” claims a CSC document published on of the “Business Challenge” of immigration. “For front-line officers, confidence in border-crossing identities and the ability to accurately assess the risks each individual poses, is more difficult and more important than ever,” it further adds, listing Ries as the CSC official to contact.

The selection of Ries as a senior official overseeing the transition at DHS, the agency that includes ICE and border enforcement, means privatized deportation interest groups will have a direct line to the new administration.

Top photo: Lora L. Ries speaking at the U.S. Chamber of Commerce on “The State of Homeland Security Since 9/11: Looking Back, Looking Forward” on Aug. 17, 2011.