Donald Trump Won’t Give Up His Brand to Be President

There’s nothing blind about the trust Trump is planning to set up for his assets. 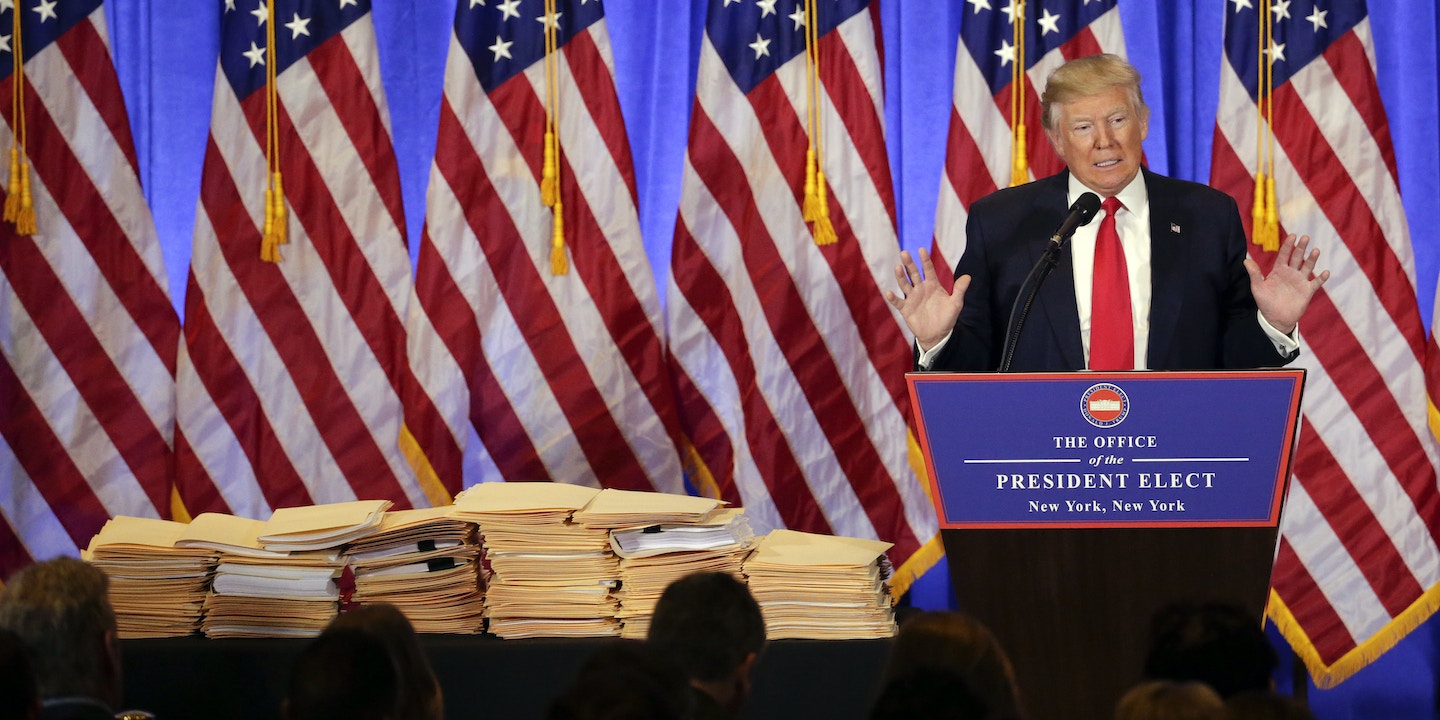 At his Wednesday morning press conference — his first since winning the election more than two months ago — Donald Trump, the president-elect, stood beside a pile of paperwork and attempted to explain how he would separate himself from Donald Trump, the brand. Rather than putting his assets into a blind trust, as many have recommended for America’s first billionaire president, Trump said he would turn day-to-day control of his business over to two his children and a longtime Trump Organization executive. He also reneged on a promise that there would be “no new deals” done during his time in office.

Trump’s proposal, arriving nine days before he assumes the presidency, comes after weeks of delays and public feuding with the Office of Government Ethics, the federal office that is supposed to oversee potential conflicts of interests.

On November 30, Trump said he would discuss his potential business conflicts at a “major news conference,” which he subsequently cancelled. On December 12, he broadened the conference’s agenda and put it off until “the near future.” Trump tweeted that same day that “no new deals will be done during my term(s) in office.”

That, like so many of Trump’s forward-looking statements, turned out to fall short of the truth. As of Wednesday, it has been replaced by a new wave of promises, mixed in with Trump’s rambling thoughts about U.S.-Russian relations and his unfair treatment at the hands of the press.

The larger message was clear: Trump does not feel that he is required to do anything about his conflicts of interest. His own lawyers had told him so. Trump staked out turf that he will likely try to occupy for the duration of his presidency: The rules only apply to me insofar as I choose to follow them.

Most of the plan’s details were not delivered by Trump himself, but by Sheri Dillon, a private tax attorney with the firm Morgan Lewis. Dillon said that Trump’s conflict-of-interest plan had been developed with Fred Fielding, another Morgan Lewis attorney who served as White House counsel for presidents Reagan and George W. Bush. Fielding was also deputy White House counsel during the Watergate scandal, which ended the Richard Nixon presidency. Here is what was learned today about Trump’s current interpretation of the rules.

Dillon said she was describing “the wall that we’re building between President-elect Trump and the Trump Organization.” But it was clear that the wall was not complete. Trump appears to have not yet given the Don-Eric-Weisselberg-run trust certain “prexisiting, illiquid, but very valuable business assets,” including his branded businesses and real estate. When these promised transfers would be complete, Dillon did not say. She emphasized that Trump was doing all of this by choice.

“The conflicts of interest laws simply do not apply to the president and the vice president,” she said. According to a report by the Congressional Research Service, this is true of conflicts of interest laws laid out in Chapter 11 of the United States Code, which bars “revolving door” employment, outside compensation for governmental duties, conflicts of interest, and other forms of graft. But, according to C.R.S., the president is still subject to the emoluments clause, the 1978 Ethics in Government Act, and other laws against bribery. One potentially troublesome statue for Trump is 5 U.S. Code § 3110, an anti-nepotism law that prohibits officials from appointing their own relatives to agencies “in which he is serving or over which he exercises jurisdiction and control.” Trump recently announced that he would name his son-in-law, Jared Kushner, to a senior White House post. Legal experts told the New York Times that the arrangement could be legal only so long as Kushner were an unpaid adviser.

Danielle Brian, the executive director of the Project on Government Oversight, took a hard line on the increasingly obvious overlap between Trump’s businesses, his administration, and his gene pool. “Firewalls work in businesses, not families,” she wrote in a statement following the press conference. “Retaining ownership and allowing his children to operate the family business is a page out of the Corruption 101 Handbook.”

Noah Bookbinder, the head of Citizens for Responsibility and Ethics in Washington, echoed Brian. “The only way for Donald Trump to avoid massive conflicts of interest is to sell his business outside the family and place the assets in a true blind trust,” he wrote.

Dillon, Trump’s tax lawyer, said that scenario was too much an imposition on the president-elect, particularly with regards to the royalties he derives from his personal brand. Trump “should not be expected to destroy the company he built,” she said. The price, she said, would be too low unless Trump sold the brand that is “key to the value of the Trump Organization’s assets.” The scenario where Trump would sell his brand, along with rights to future royalties, in return for the opportunity to serve as president of the United States, was never discussed.