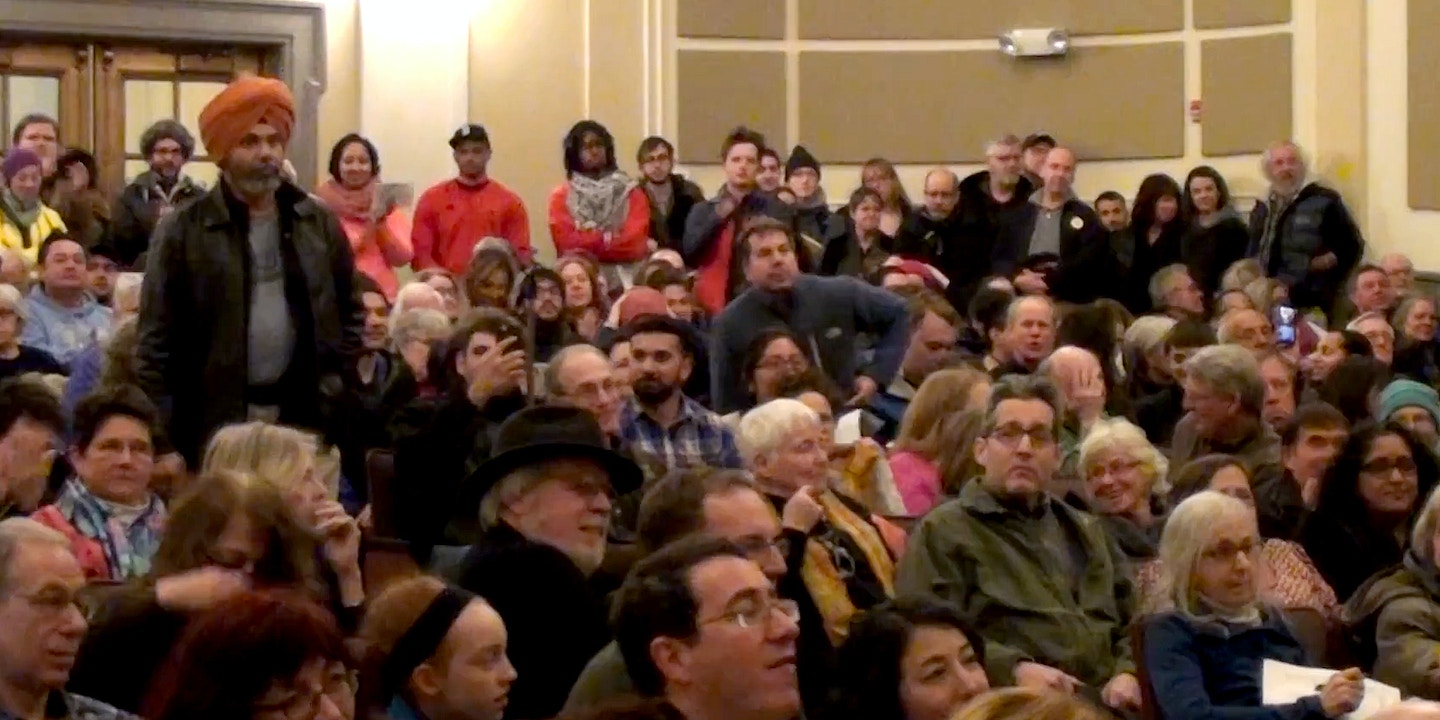 At a testy meeting with a crowd of constituents Sunday evening, Sen. Sheldon Whitehouse, D-R.I., became the latest Democratic senator to face a grassroots backlash for voting to confirm President Donald Trump’s nominee for director of the Central Intelligence Agency.

Whitehouse was one of 14 Democrats who voted last Monday to confirm Mike Pompeo, a fierce Trump ally who largely shares the president’s antagonism towards Muslims and personal privacy, and has strongly suggested that he supports bringing back intelligence gathering techniques that include torture.

Organizers said more than one thousand people showed up at the senator’s town hall, held inside a Providence middle school auditorium, to denounce Whitehouse’s support for Pompeo. The venue hit its capacity of 600 people, leading the overflow crowd to chant for the senator to come outside so they could hear his explanation for the vote.

“You are entitled to an explanation of why I have voted for some of the defense nominees and I will concede right off the bat that I may have been wrong,” Whitehouse told people in the auditorium. His talk was captured in video posted by activist filmmaker Sam Eilertsen and political blogger Steve Ahlquist.

Whitehouse eventually headed outside to talk to the crowd over a bullhorn.

“Why did I vote for Pompeo?” Whitehouse said. “I think that there are a lot of you who may disagree with me on this, and I appreciate it. Sometimes I feel pretty confident, sometimes you need to make a judgment call.”

“He’s a Rubio guy,” the senator continued, drowned out by a chorus of booing. “Sometimes you need to be in a position to say no if something really, really significant happens.”

The crowd, unhappy with the response, began yelling again, and called for the senator to disclose  his positions on other Trump cabinet nominees. Whitehouse committed to voting against Betsy DeVos for education secretary, Steve Mnuchin for treasury secretary, Rex Tillerson for secretary of state, Jeff Sessions for attorney general, Scott Pruitt for EPA, and Andy Puzder for labor secretary, but said he wants to meet with Elaine Chao, Trump’s pick for transportation secretary, before making a decision.

Demonstrators, marching with signs that read “Resist Trump” and “Today It’s Muslims Tomorrow It’s You,” rallied before the event.

Whitehouse’s support for Pompeo was a focus of the anger. “This is a man who sees international politics and world history as a clash between Judeo-Christians and Muslims, who thinks Edward Snowden should be executed, who supported torture, and refused to say he thinks it is wrong to, to use Donald Trump’s terms, take out the families of accused terrorists,” said David Segal, executive director of Demand Progress, at the rally outside the event.

Demand Progress, along with Resist Hate RI and the RI Working Families Party, organized the event.

Activists around the country have increasingly called on Democratic lawmakers to do more to stop Trump’s nominations. Last Tuesday, more than 100 demonstrators picketed Sen. Mark Warner’s office in northern Virginia to protest the senator’s support for Pompeo. Sen. Bob Casey, D-Pa., said his office received more than 50,000 emails and letters urging him to oppose the nomination of DeVos.

While Democrats are hampered by their own party’s 2013 filibuster reforms, which allow any nomination below the Supreme Court to pass with only 51 votes, activists say they are demanding united opposition, even if only to send a message.

“Democrats alone can’t block these appointments but they can make sure they don’t have our stamp of our approval,” Segal said. “They must vote as any one of us would vote: against torture, against surveillance, against authoritarianism, and against Trump.”

Top photo: This still frame made from video footage shows attendees at a town hall held by Sen. Sheldon Whitehouse, D-R.I., where more than one thousand people showed up at the senator’s town hall, held inside a Providence middle school auditorium, to denounce Whitehouse’s support for Mike Pompeo.