In Confirmation Lovefest, Senators Tell Future Spy Chief He May Be Too Nice for the Trump Administration

Senators seemed more concern with the nominee’s “lovely” wife than whether the likely director of national intelligence would rein in abuses. 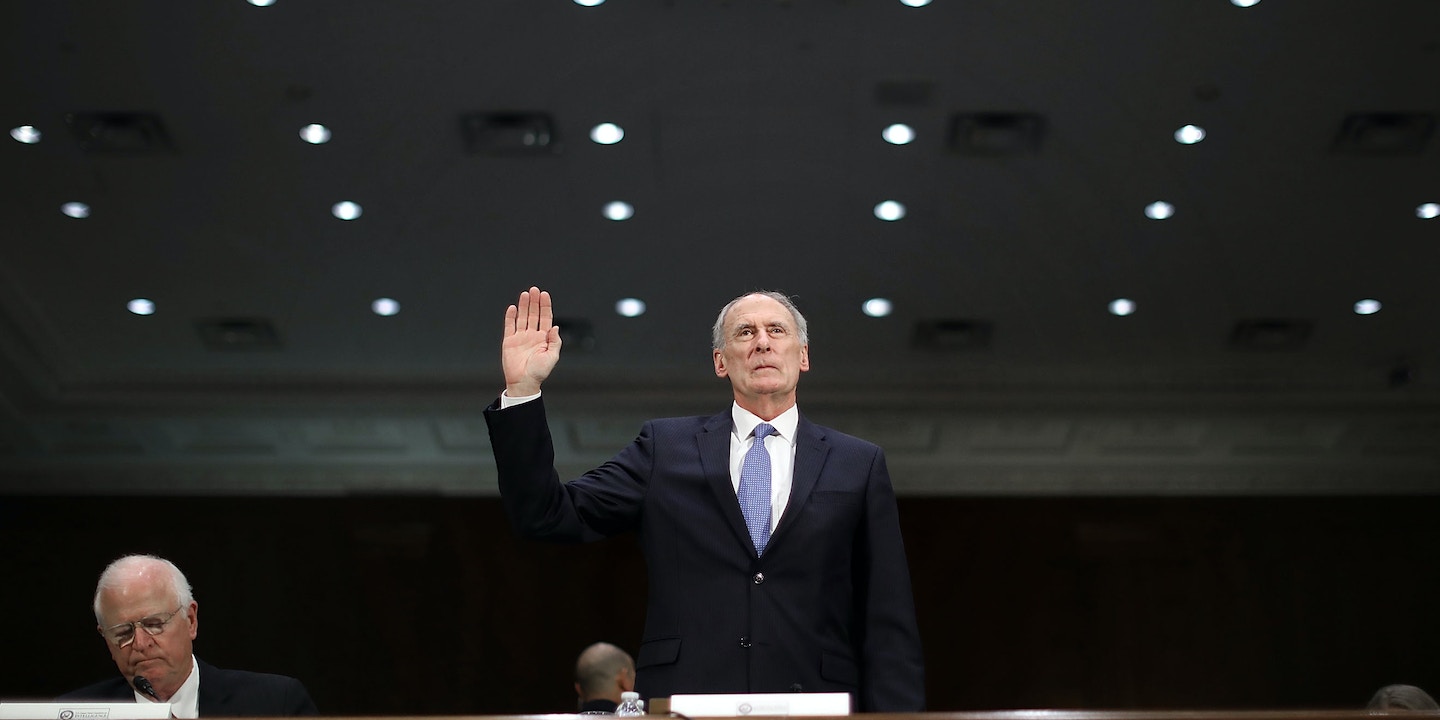 Coats served on the Senate Select Committee on Intelligence alongside many of the men and women tasked with assessing his readiness to lead the nation’s 17 intelligence agencies. The Indiana Republican announced his retirement in November 2015, before being asked by President Trump to take on the director of national intelligence job in January. His former colleagues kept things lighthearted during the unclassified session. Coats kicked off his testimony by comparing the DNI’s role to that of a head football coach.

“There is a coach for offense, defense, special teams, one for quarterback and on and on it goes. But every team has a head coach. … I see the role of director of national intelligence as analogous for the head hole for the intelligence community, … integrating and leveraging all of the expertise in our community,” he said during his opening statement, when he also took the opportunity to celebrate the Chicago Cubs’s World Series win. He also gave a shout out to his wife and his 10 grandchildren.

Coats promised to work to streamline the development process for satellites at the National Reconnaissance Office, attend meetings of the National Security Council, cooperate with Congress’s investigation into alleged Russian hacking during the election, and tell the president the truth whether he wants to hear it or not — to try to be ornery and straight shooting like notorious New England Patriots head coach Bill Belichick when confronting the world’s threats.

But several senators who called Coats a friend — nearly all of whom asked about his “lovely wife,” as former Sen. Saxby Chambliss referred to her — expressed reservations about Coats’s kindhearted nature, his “Mr. Rogers” personality, and the potential that the White House would steamroll him during internal meetings and discussions.

Those concerns likely aren’t unfounded. The director of national intelligence was left off a list of permanent members of the Principals Committee of the National Security Council, and reporting from The Intercept as early as November has suggested an appetite in the Trump administration to do away with the position altogether.

“You’re one of the most likable, affable, easygoing people I’ve ever met,” Angus King, the independent senator from Maine, said during the hearing. For the person in charge of the nation’s intelligence community, who is going to be “reporting to a president who may not want to hear what you have to say,” King said he wanted “someone crusty and mean and tough.”

Sen. James Lankford, apparently not reassured, demanded Coats “be tough when [the job] requires you to be tough.”

While Coats attempted to assuage his former colleagues’ concerns, saying he understood that responsibility — that now is “no time to be the nice guy” — he faltered and failed to commit to definitive positions when asked tougher questions.

Throughout the hearing, when put under pressure — about the National Security Council or specifics about intelligence programs — Coats stumbled over his words, at one point calling his expected position “the DI”, flubbing “transparency” with “tranparity.”

Sen. Ron Wyden, the Oregon Democrat who has been an outspoken critic of the intelligence community, came out swinging with specific questions and demands of Coats. While Coats had no trouble to responding to Wyden’s questions about Russia, he refused to commit to publishing the number of Americans swept up in the NSA’s foreign intelligence dragnet, or release public updates on why that estimate hadn’t been completed yet.

“We need that number, we have sought it for years and years,” Wyden pleaded.

“I’m going to do everything I can,” Coats responded. “I’ve been told it’s an extremely complex process,” he continued — a process he doesn’t yet understand. “I need to first find out why we can’t get it.”

In the past, the ODNI has argued searching its database for the number of Americans’ communications incidentally grabbed up would be technically impossible, and if not, it would doubly invade the privacy of the owners.

Coats also seemed to question laws against torture, including a 2015 Senate amendment to the defense budget, which in turn bolstered a 2009 executive order from President Obama. As a senator, Coats voted against that amendment, and while he told the committee his job would be to fully comply with the law, he also left open the possibility for extreme measures in a “ticking time bomb” scenario. In a situation “where you know something terrible is going to happen to the American people in a short amount of time” and “you don’t have time to go through the process that the Army Field Manual requires” Coats said, “I do think it’s at least worth a discussion relative to the situation that might occur.”

Ultimately, a decision to amend the Army Field Manual would fall to Gen. James Mattis, the secretary of defense, who has consistently said he doesn’t think torture works. When Sen. Mark Warner, the Demoratic vice chair of the committee, pressed Coats to promise he wouldn’t lead a charge to change the law on torture, he said he “respected” Mattis’ and Sen. John McCain’s views on the subject. “I intend to be available to work with them and talk with them,” he continued.

Additionally, senators were confused as to whether or not Coats would secure a permanent place on the National Security Council — rather than a promise and a pat on the back from the president that he would be informally included. Coats said his team requested that the executive order outlining the structure of the NSC be amended — but that he had not heard back from the White House on a date or time that might happen.