Trump Has Called the Afghan War a “Mess.” His Generals Want to Escalate It.

As a candidate, Trump was critical of America’s land wars but his generals and GOP hawks want to send more troops into Afghanistan, 16 years after 9/11.

I hate agreeing with Donald Trump. “We made a terrible mistake getting involved in the first place,” he told CNN in October, referring to the war in Afghanistan, which he called a “mess.” “I would leave the troops there begrudgingly,” the then-presidential candidate added. “Believe me, I’m not happy about it.”

You remember Afghanistan, right? The longest war in U.S. history and the most unpopular one, too? The ongoing conflict that’s been ignored by politicians and pundits alike, despite 2,400 U.S. dead and a whopping $1 trillion price tag?

Afghanistan hardly got a look in during the election campaign. The decade-and-a-half-long war was mentioned only once in the three presidential debates — in the form of a passing reference by Hillary Clinton. Trump, however, might want to put down the golf clubs and start paying attention to the forgotten struggle against the Taliban, which was supposed to have formally ended in December 2014. His generals, backed by GOP hawks in Congress, want to drag it out for a few more years. Their unspoken mantra? When in doubt, double down.

But even Hamid Karzai, former president of Afghanistan and one-time ally of the United States, believes that enough is enough. “We don’t want [more] foreign forces bombing our villages, arresting our people, destroying our homes and causing more war in Afghanistan,” he tells me. Such violence, he adds, in a nod to the Taliban insurgency, “naturally causes resentment” and “legitimizes any resistance to it.”

Yet last month, while all eyes were on Jeff Sessions’s confirmation as attorney general on the floor of the Senate, Gen. John Nicholson, the top U.S. commander in Afghanistan, appeared before the Senate Armed Services Committee to ask for a “few thousand” more U.S. troops. Last week, his boss, Gen. Joseph Votel, head of U.S. Central Command, echoed Nicholson’s request, telling senators that a new “strategy” for Afghanistan had to “involve additional forces.” And this week, Republican Sens. Lindsey Graham and John McCain, who never met a Muslim-majority nation they did not want to bomb, invade, or occupy, used a Washington Post op-ed to call for — surprise, surprise — “additional U.S. and coalition forces” in Afghanistan, including “special operations forces and close air support.”

“It is imperative that we see our mission through to success,” they declaimed.

What was that definition of insanity again? Lest we forget, Trump’s predecessor was also asked by his generals for more troops in his first year in office: Barack Obama surged 30,000 extra soldiers into Afghanistan, against the advice of his vice president, only to see the Taliban grow stronger, not weaker. So why it is anything other than a fantasy to suggest that 20,000 or even 30,000 troops in Afghanistan under Trump — as opposed to the 8,400 U.S. troops currently deployed there as part of a NATO support mission — will be able to achieve the victory denied to 100,000 U.S. troops in Afghanistan under Obama in 2010?

During his Senate testimony, Nicholson was asked by McCain whether the U.S. was winning or losing in Afghanistan. “I believe we are in a stalemate,” replied the general.

This is pure delusion. Donald Rumsfeld, the defense secretary for President George W. Bush, may have claimed that “we lack metrics to know if we are winning or losing the global war on terror,” but we don’t lack those “metrics” for the war against the Taliban. Since 2001, the hawks have cited a dizzying array of measures, from nation-building to counterterrorism to the war on drugs, all of which have resulted in “mission failed” rather than “mission accomplished.” 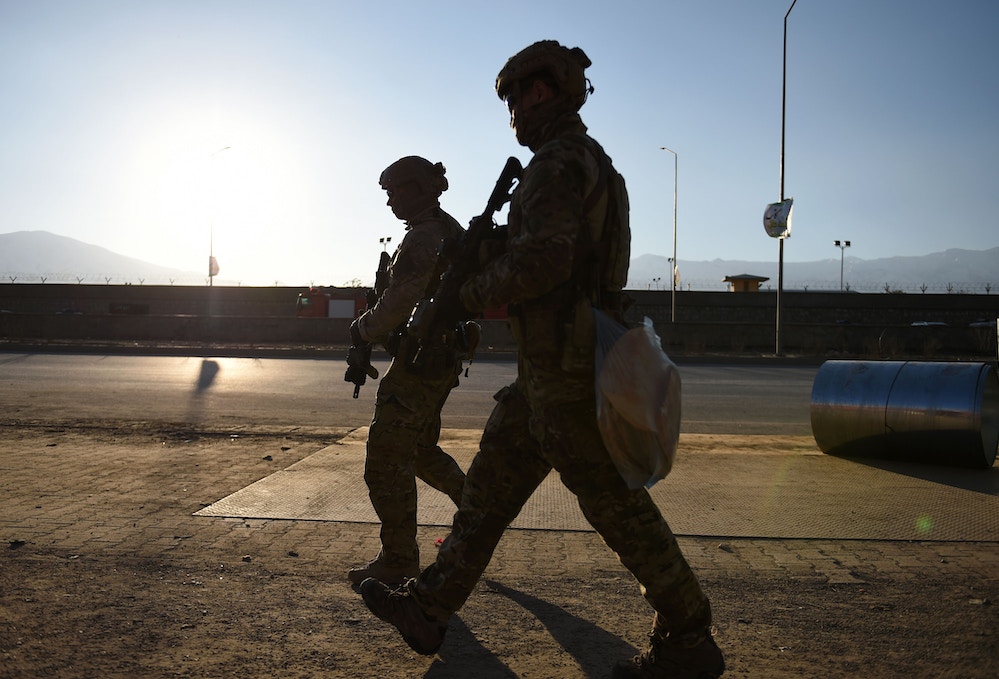 U.S. soldiers arrive at the site of a suicide car bombing that targeted an Afghan police district headquarters building as a gun battle continued between Taliban and Afghan security forces in Kabul on March 1, 2017.

Supporting a stable, democratic Afghan government? The U.S.-backed president and his “chief executive” are in the midst of a bitter power struggle; the vice president is a vicious warlord; parliamentary elections have been postponed; and corruption runs rampant — Afghanistan ranks 169 out of 176 countries in Transparency International’s latest corruption league table.

Protecting the population? Civilian casualties in Afghanistan in 2016 reached their highest level since the U.N. first began recording them in 2009. Last month, on Trump’s watch, U.S. airstrikes in Helmand province were reported to have caused the deaths of at least 18 civilians, mostly women and children.

Reducing drug trafficking? Afghanistan continues to supply around 90 percent of the world’s illicit opium, with production having risen by an astonishing 43 percent in 2016. Meanwhile, more than a million Afghans are now addicted to drugs.

Preventing the spread of ISIS? Last week, ISIS gunmen dressed as doctors launched a brazen attack on a military hospital in the heart of the capital, Kabul, killing more than 30 people.

Defeating the Taliban? The insurgents have been on the offensive over the past year or so and now hold more Afghan territory than in any year since 2001. As Politico reported, “The Afghan government controlled 57 percent of the country’s districts in November, … which is a 6 percent loss since August and a 15 percent drop compared with November 2015.”

Does any of that sound like a draw to you? Nicholson and Votel might be of the view that neither side has the upper hand (hence “stalemate”) yet as Henry Kissinger once remarked, “The conventional army loses if it does not win. The guerrilla wins if he does not lose.” (Yes, I hate agreeing with Kissinger, too.)

Will Trump, obsessed as he is with “winning,” recognize that there is no decisive military victory to be had in the killing fields of Afghanistan? Or is the proud author of “The Art of the Deal” willing to strike some form of bargain with the loathsome Taliban to try and end the Afghan debacle, once and for all? A study published in January by academics Michael Semple and Theo Farrell, based on their direct conversations with former Taliban ministers and commanders, concluded that “the boost to [Taliban] morale from 2016 battlefield successes” has been “dampened by the high cost at which they were gained” and also by a weak new leader, which has opened the door to “insurgent peacemaking.” There is, they say, a deal to be done.

However, as Farrell has since noted, “Ramping up the U.S. military effort in Afghanistan risks re-injecting a sense of purpose into the Taliban war effort.” From the very beginning of the conflict, the U.S. military presence has been part of the problem, not the solution. It is a recruiting tool for a nationalist, not just Islamist, insurgency.

Karzai has shifted from enthusiastic supporter of the initial U.S. intervention in Afghanistan to outspoken critic and opponent of U.S. combat forces. Before the new U.S. president approves his own “surge” in Afghanistan, Karzai wants him to explain to the Afghan people why, after more than 15 years, “with so much blood and treasure spent, so much loss of life, the country is not secure. Why is there more extremism? Why did [ISIS] emerge in Afghanistan while the U.S. [military] was here?”

Yet I suspect the belligerent Trump, who promised to “bomb the shit out of” ISIS and who, since coming to office, has escalated U.S. military action in Yemen and deployed U.S. ground forces to Syria, will find it difficult to resist the siren calls of more troops, more bombs, more war.

Top photo: U.S. soldiers board a military aircraft at the U.S. base in Bagram, north of Kabul, as they leave Afghanistan in 2011.