We’re on a trajectory to the worst possible outcome, in which Trump and Russia become the millennials’ equivalent of the John F. Kennedy assassination. In a better, imaginary world, there would be no need for Thursday’s Senate hearings into whether and how the Russian government meddled in the 2016 presidential election. Instead, a combined Justice Department and congressional investigation into the subject would have started last summer and could be wrapping up right about now.

This investigation would have been successfully carried out by the government’s normal mechanisms — because in this made up universe, politicians would care more about the country they live in than getting to the studio in time for their next appearance on Tucker Carlson Tonight. For the same reason, they’d defy the instinctive secrecy of the intelligence world in order to declassify whatever evidence they uncovered so Americans could judge it for themselves.

Unfortunately, on this planet we’re on a trajectory to the worst possible outcome. It’s now easy to imagine a future in which Trump and Russia become the millennials’ equivalent of the John F. Kennedy assassination: A subject where no one can honestly be sure whether there was no conspiracy or a huge conspiracy, the underlying reality concealed by the thick murk of government secrecy, and progressives exhausting themselves for decades afterwards trying to prove what really happened.

Democrats were thrilled when FBI Director James Comey took the unusual step of revealing that the bureau is carrying out an “ongoing investigation” into whether there was any coordination between the Trump campaign and the Russian government. But as Hillary Clinton would strenuously tell you, the mere fact of an FBI investigation does not prove anything, and no one should believe it does. The FBI could easily close its investigation without filing any charges — especially since this is a counterintelligence inquiry rather than a criminal one — either because investigators found no evidence of wrongdoing, or because they did but believe they can’t seek an indictment without revealing classified surveillance programs. The FBI then might give no public explanation of its decision, and leave secret indefinitely whatever evidence was gathered.

What happens then? Democratic partisans will be infuriated, and rightfully point to the fact that Comey’s investigation was ultimately overseen by a Trump political appointee at the Justice Department. But they’d have no formal recourse. (The investigation began last year during the Obama administration and is now supervised by Acting Deputy Attorney General Dana Boente, since Attorney General Jeff Sessions has recused himself on the subject. However, Rod Rosenstein, Trump’s nominee for Deputy Attorney General, will eventually be in charge.)

Meanwhile, there are several ongoing investigations in Congress, with the two most significant ones carried out by the House and Senate Intelligence Committees.

But these inquiries suffer from the same flaw: They are supervised by Republicans. The situation is especially dire with the House Intelligence Committee, now that the escapades of its chairman, Rep. Devin Nunes of California, have revealed him to have a toddler’s sense of personal responsibility. Even worse, the ultimate authority in the House, Speaker Paul Ryan, has demonstrated his own lack of integrity by refusing to ask Nunes to recuse himself. 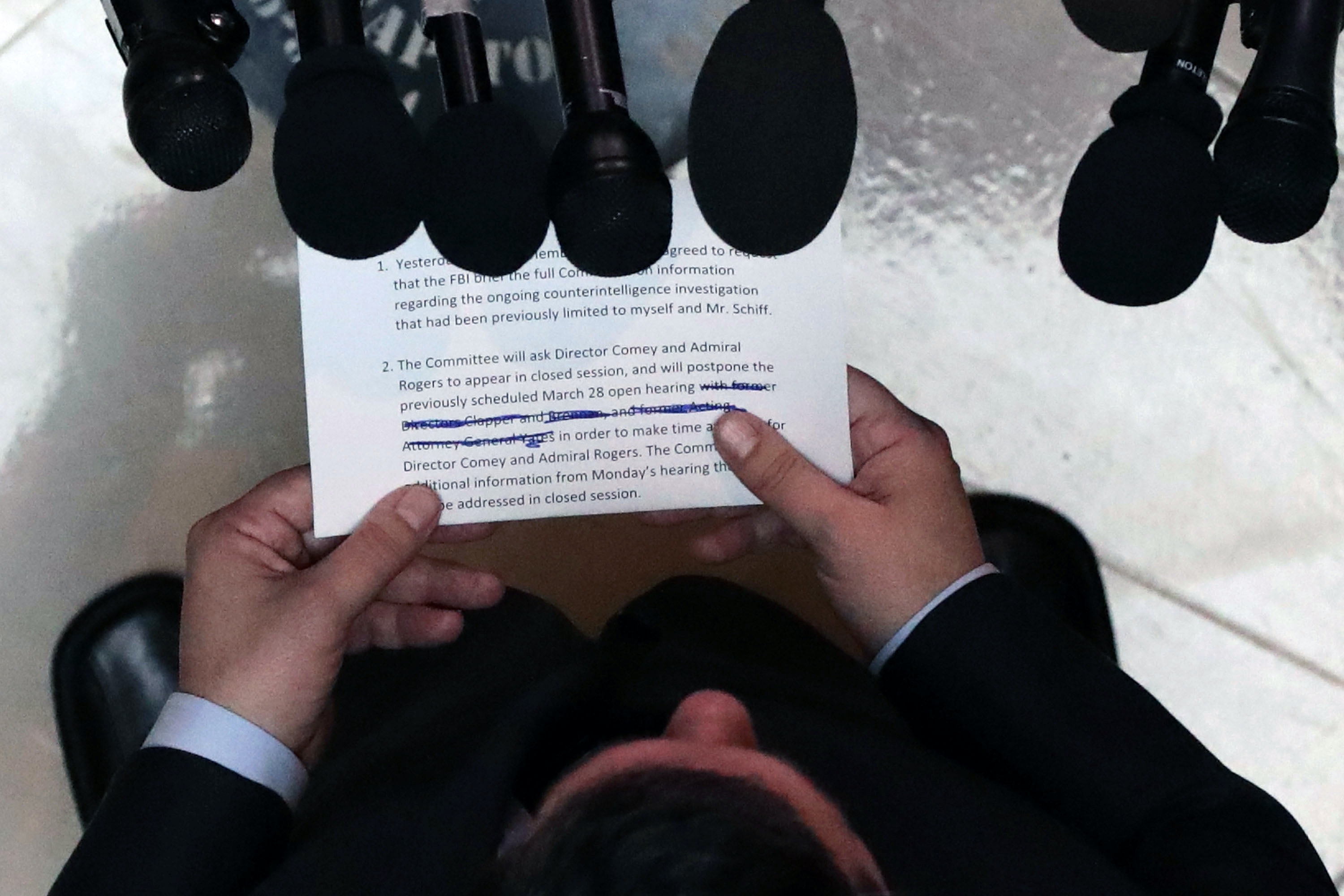 The Senate Intelligence Committee has a somewhat stronger track record of conducting thorough, credible investigations, such as its reports on torture and the pre-war intelligence on Iraq’s imaginary weapons of mass destruction.

But even in these cases their work did not ask obvious questions and took years to complete. If they turn in a similar performance this time, we’ll be past the 2020 elections before they’re done.

Moreover, while the committee’s GOP chairman Sen. Richard Burr of North Carolina, and its ranking member Democratic Sen. Mark Warner of Virginia, are making a public show of bipartisan resolve, Burr was a vociferous 2016 supporter of Trump — and at the request of the White House called media outlets to anonymously push back on their Russia stories.

So if the intelligence committees conclude there was no coordination between Russia and the Trump campaign, it will understandably be impossible to persuade many Democrats that the investigations were legitimate. (On the other hand, Republicans would have good reason to be skeptical if they do not reveal surveillance of Donald Trump and his associates – both intelligence committees are notoriously loath to attack the agencies they’re supposedly overseeing, and members have made truly shocking statements about their general impotence.)

The solution now remains the same as it’s always been: A commitment by top Republicans to investigations that will not just be credible to them but to everyone else in the country.

In the case of the FBI, this will require the appointment of a special prosecutor by incoming Deputy Attorney General Rosenstein to take management of the counterintelligence investigation out of the hands of Trump nominees like himself. Sixty-five percent of Americans support this course of action, including 43 percent of Republicans. Many Democratic senators have called for a special prosecutor, and former GOP presidential candidate Carly Fiorina just did too, making the obvious point that one is needed “to get to the bottom of this in a way that everyone trusts.”

With Congress, the investigations should be conducted not by regular committees, all controlled by the majority Republican party, but by a well-resourced special select committee like the ones that investigated Watergate and intelligence agency abuses in the 1970s, Iran-contra in the 1980s, and alleged Clinton administration misconduct in the 1990s. Many Democrats support this, and Republican Sen. John McCain of Arizona joined them in the wake of the Rep. Nunes’s peculiar behavior. Ideally such a select committee would have an equal number of members from each party.

(Another possibility, something akin to the 9/11 Commission, with no current politicians, seems appealing at first glance but actually would likely be more time consuming and less effective than leaving it in the hands of Congress.)

Finally, the investigations must commit to making public as much of the evidence they uncover as possible. In fact, if Trump is confident that there is nothing to this story, he could pledge to make this happen himself, since as president he has the power to declassify anything he wants.

There’s no question that making any of this happen will be an uphill battle. But the Republican wall of opposition to different and better investigations is breaking. And Americans of any party or none may soon realize that it’s in everyone’s interest to settle this as quickly as possible, once and for all.

Top photo: People walk across Red Square, with the Kremlin’s Spasskaya (Saviour) Tower seen in the background, in central Moscow on Oct. 9, 2016.