Trump Praises Erdogan, Whose Bodyguards Then Assault Protesters in Washington

After his warm reception at the White House, the Turkish president’s bodyguards were caught on video punching and kicking protesters in Washington. 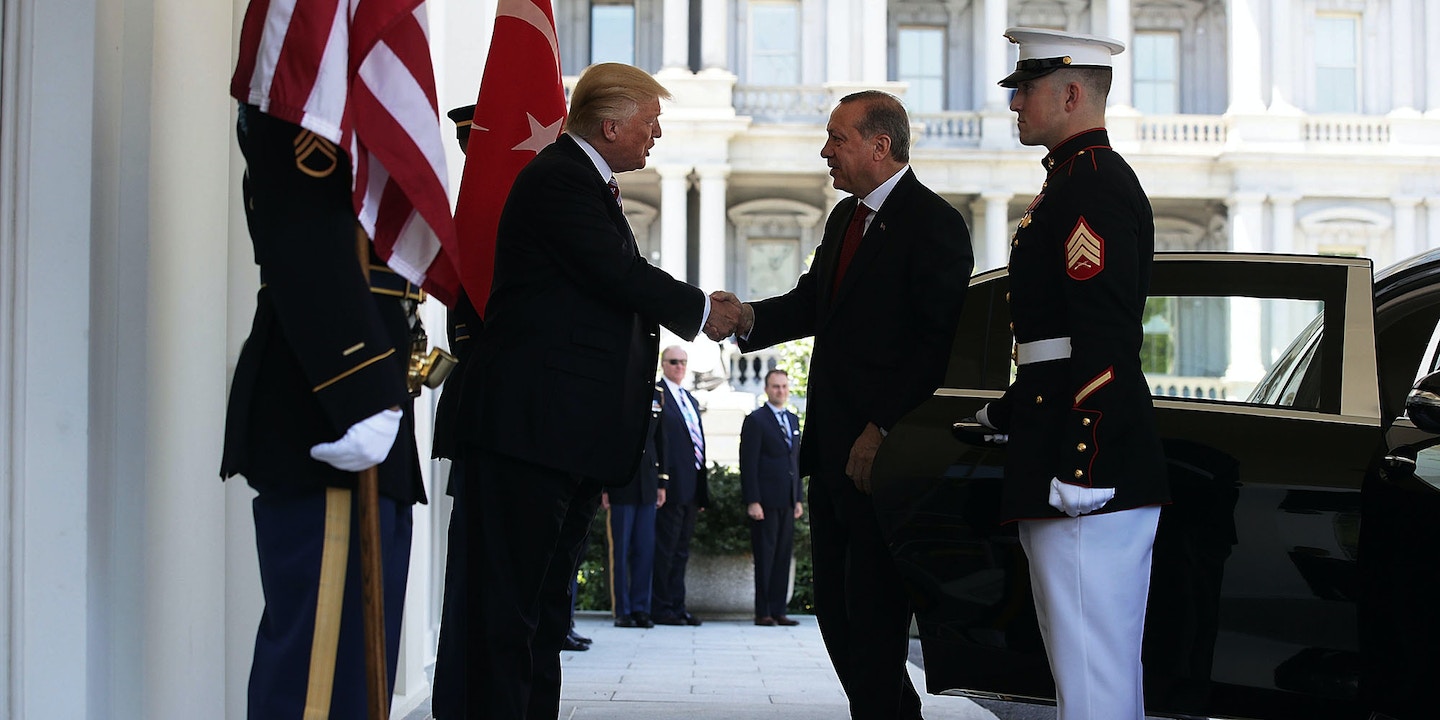 Casting aside his predecessor’s concerns about human rights abuses and the suppression of free speech in another nation, Donald Trump lavished praise on another autocratic foreign leader on Tuesday, calling it “a great honor to welcome the President of Turkey, Recep Tayyip Erdogan, to the White House.”

Just hours after Trump focused his remarks on “the exemplary valor of the Turkish soldier,” however, Erdogan’s presidential bodyguards were caught on video punching and kicking protesters outside the Turkish ambassador’s residence in Washington.

Images recorded by the Turkish-language service of Voice of America, a Congressionally funded broadcaster, showed the Turkish security guards battering about a dozen demonstrators, after scuffles between the protesters and Erdogan supporters.

Another witness captured video of the aftermath, as some of those injured in the attack received treatment, and an Erdogan supporter stomped on the flag of a Syrian Kurdish group that is fighting the Islamic State with the support of the United States.

One of the Kurdish protesters injured in front of the ambassador's residence. She is being treated in the hospital now pic.twitter.com/NuGobtxGcx

Some of the Turkish officials were seen kicking prone demonstrators who had already been knocked to the pavement across from the diplomatic compound, where Erdogan had arrived a short time earlier.

This fucking guy is the one I want prosecuted first. pic.twitter.com/0sFtXQ7RSE

One Turkish official was photographed throttling a young woman.

This afternoon in front of the residence of the Turkish ambassador in Washington pic.twitter.com/nb1X3A0prm

Far from disputing that Erdogan’s security team was involved in the melee, a state news agency confirmed it, reporting, inaccurately, that the president’s team had been forced to step in because the American police had failed to stop an “unauthorized protest” by supporters of a Kurdish terrorist group.

A pro-government newspaper, Yeni Safak, also blamed the DC police for not stifling the protest, and claimed that the Kurdish protesters had “shouted racist slogans against Turkey and attacked Turkish citizens.”

Turkish daily claims that Erdogan's guards were helping the american police since the police couldn't handle the unauthorised demonstration. pic.twitter.com/Bd1uEPvkny

In fact, as video recorded just before the bodyguards charged the protesters showed, the demonstrators had been chanting “Erdogan: terrorist!” while holding signs decrying Turkey’s repression of its Kurdish minority and the jailing of a Kurdish political leader, Selahattin Demirtas.

One pro-Erdogan journalist, Fatih Tezcan, even shared video of the attack set to thrilling music, in which it seemed to have been provoked by a woman tossing water in the direction of the president’s supporters.

“Yesterday afternoon we witnessed what appeared to be a brutal attack on peaceful protesters at the Turkish ambassador’s residence,” Peter Newsham, the chief of Washington’s Metropolitan Police Department told reporters on Wednesday afternoon. “As a result of the assault, 11 people, and one police officer, were injured.”

The police chief said that his officers were scouring through video of the incident and could file charges against those responsible for the attack, but did not yet know if any of the assailants had diplomatic immunity.

Newsham also said that such repression of dissent is “not something that we will tolerate here in Washington, D.C. — this is a city where people should be allowed to come and peacefully protest.” He noted, too, that the fact that some of the Turkish bodyguards were armed made the situation “dicey” for police officers.

While Erdogan’s guards had engaged in similar behavior during a visit to a Washington think tank last year, on that occasion the Turkish leader had not been invited to the White House by Trump’s predecessor, former President Barack Obama.

Obama’s United Nations ambassador, Samantha Power, and former National Security Council spokesman, Tommy Vietor, were among those who expressed disgust at images of the assault on protesters in Washington on Tuesday.

Clearly Erdogan's guards feel complete impunity, drawing on tools of repression they use at home & knowing he has their back,no matter what https://t.co/jq1tFHwv35

Today Turkish President Erdogan's goons beat the shit out of American protestors in Washington, DC. We cannot allow this to stand. https://t.co/h7JAhSQl5L

Turkish goons bloody assault on protestors in DC was assault on America—saying fuck your laws & values we can stomp here in your capital.

Trump’s warm embrace of Erdogan, whose name he repeatedly mispronounced, seemed to continue a pattern of ignoring the repressive behavior of autocratic leaders — from Vladimir Putin to Abdel Fattah el-Sisi to, briefly, Bashar al-Assad — who try to cast their crackdowns on dissent as part of a broader war on Islamist terror.