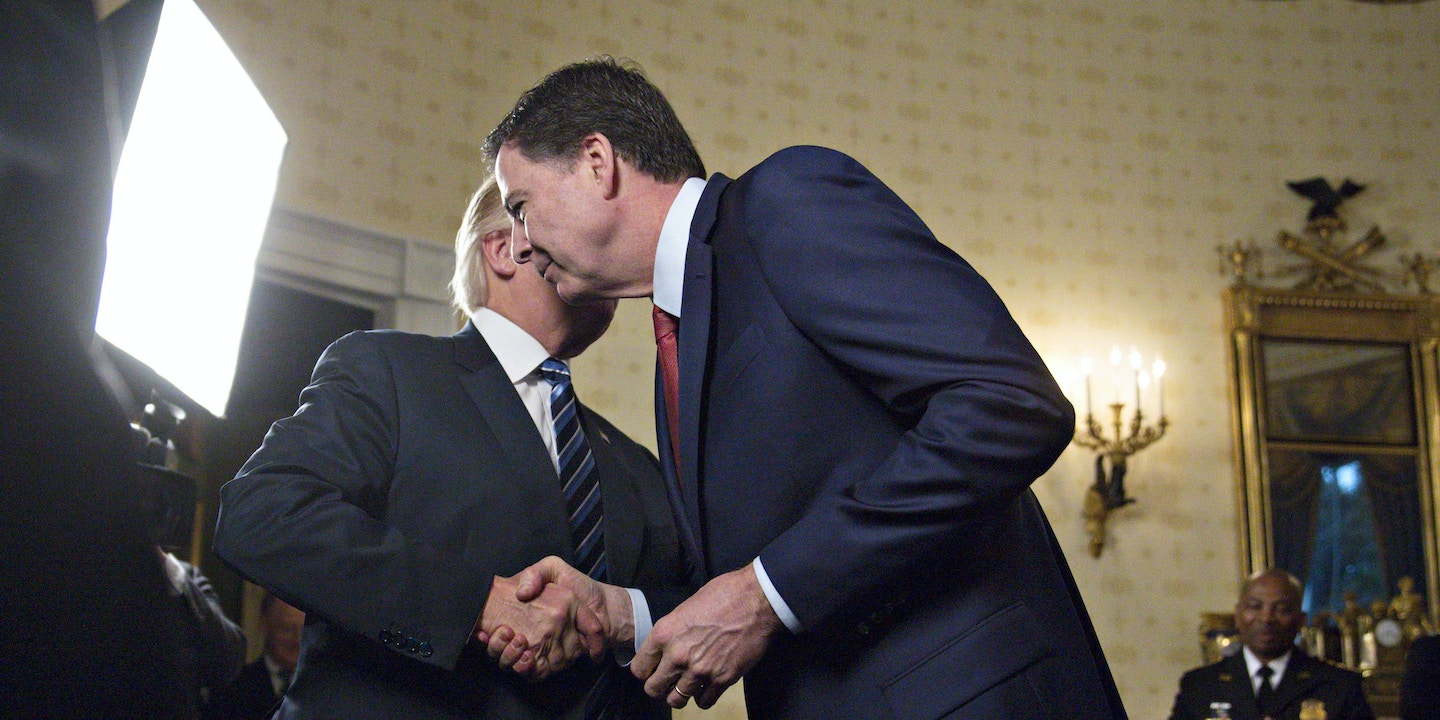 Former FBI Director James Comey offered the first glimpse of what President Donald Trump looks like through his eyes in a seven-page “statement for the record” previewing his live testimony before the Senate Intelligence Committee on Thursday. In the prepared remarks, released Wednesday, Comey narrates a pattern of encounters with Trump that he considered awkward and unsettling.

Most importantly, in Comey’s telling, is the threat that Trump posed to the independence of the FBI. The FBI has an ongoing investigation into the Trump campaign’s ties to Russia, particularly those of Michael Flynn, who served as Trump national security adviser for the administration’s first 24 days. Comey’s statement suggests that Trump tried to quash that investigation in their meetings. Interference with the investigation could be considered obstruction of justice, a potentially impeachable offense, depending on how Congress interprets what transpired.

In his letter announcing Comey’s firing, Trump wrote that Comey had informed him “on three separate occasions” that he was not under investigation. Comey’s statement appears to verify Trump’s claim — though his version of events suggests a more complicated situation than the president’s letter let on. According to Comey, Trump was keenly interested in having the FBI director publicize that he was not under investigation.

In a March 30 phone call, Comey said Trump “repeatedly” told him, “We need to get that fact out.” Comey declined to do so, adding, “I did not tell the president that the FBI and the Department of Justice had been reluctant to make public statements that we did not have an open case on President Trump for a number of reasons, most importantly because it would create a duty to correct, should that change.”

In his Wednesday statement, Comey described his meetings with Trump one by one. In a January meeting at the White House, the pair’s second, Comey said Trump asked him if he wanted to keep the job of FBI director. That’s a question Comey “found strange,” with six years left in his 10-year-term, because he and Trump had already discussed that he was staying on.

“My instincts told me that the one-on-one setting, and the pretense that this was our first discussion about my position, meant the dinner was, at least in part, an effort to have me ask for my job and create some sort of patronage relationship,” Comey wrote in his statement. “That concerned me greatly, given the FBI’s traditionally independent status in the executive branch.”

The awkward moments — and the questioning of Trump’s motives by Comey — keep coming after that.

Former FBI Director James Comey’s “statement for the record,” released by the Senate Select Committee on Intelligence, is photographed on June 7, 2017.

The Trump who emerges is the familiar persona from Trump’s reality television career — a ham-handed operator who uses carrots and sticks to extract loyalty from subordinates. Comey’s first face-to-face meeting with the president-elect took place at Trump Tower in January, two weeks before Trump was sworn in. In Comey’s account, it was his job to stay behind after other intelligence officials had left and brief Trump on what he described as “some personally sensitive aspects” of the government’s investigation into Russian interference in the 2016 election.

From that point forward, as Comey tells it, Trump repeatedly asked him to back off on the Russia investigation, at one point calling it a “cloud” that was “interfering with his ability to make deals for the country.” Comey repeatedly demurred.

“I need loyalty, I expect loyalty,” Trump said, according to Comey’s statement, in a description of a January 27 one-on-one dinner that hews closely to a New York Times account of the encounter. “I didn’t move, speak, or change my facial expression in any way during the awkward silence that followed,” Comey wrote. “We simply looked at each other in silence.” When the topic came up again, Comey responded by offering his “honest loyalty.”

“It is possible,” he wrote, “that we understood the phrase ‘honest loyalty’ differently, but I decided it wouldn’t be productive to push it further.”

Indeed, their understanding appears to have been different. On April 11, the last time Comey and Trump spoke, Comey wrote that Trump agreed to go through more traditional channels — the White House counsel and the Department of Justice — with his concerns about the Russian investigation. Trump said, “Because I have been very loyal to you, very loyal; we had that thing you know.” There was no thing, and no deal. Three weeks later, Trump fired Comey.

Tomorrow, at his much-anticipated congressional testimony, Comey will tell more of his side.