The Real Threat To Wall Street Reform Is The Treasury Department, Not Congress

Forget the House Republican bill to repeal Dodd-Frank. The threat to Wall Street reform is in Treasury. 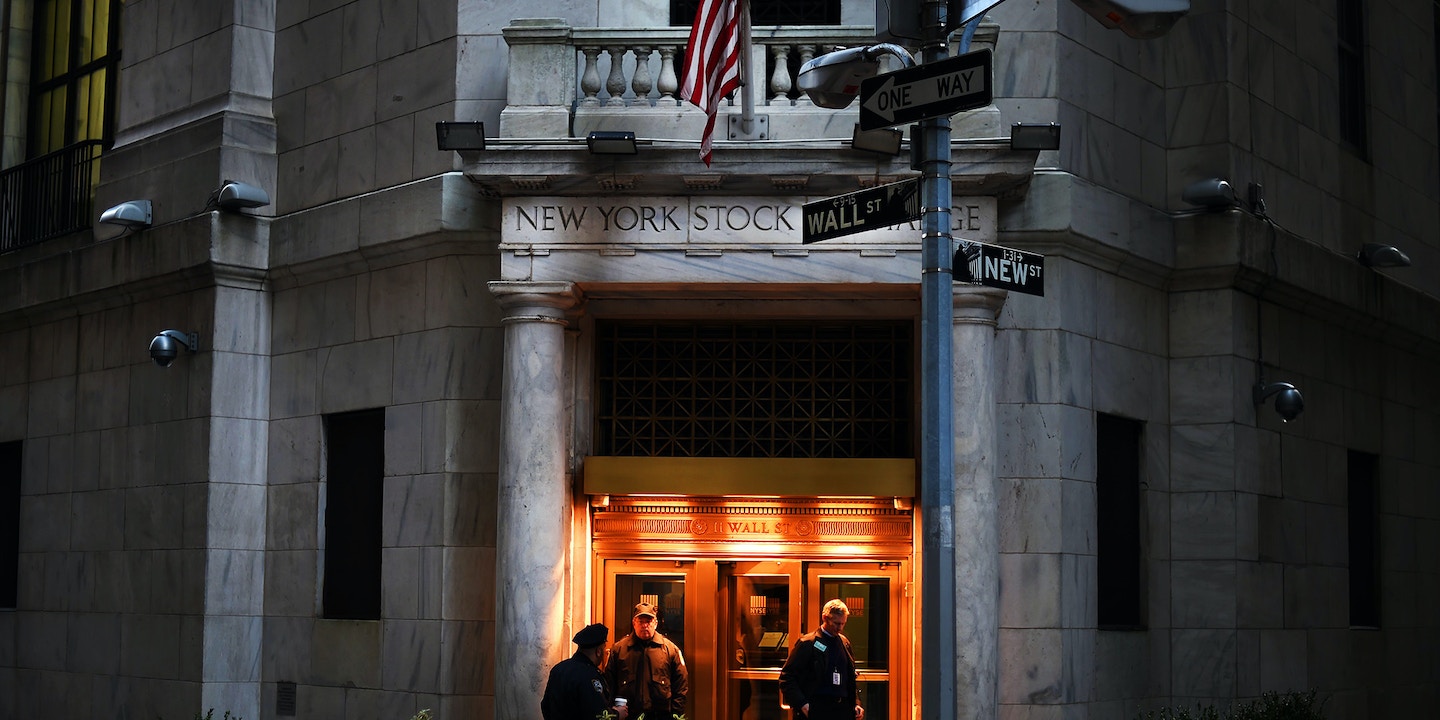 The Treasury Department’s first report recommending changes to the financial regulatory system wildly differs from the plan to dismantle Dodd-Frank that House Republicans passed — and the Trump administration endorsed — just last week. In fact, the report attacks the central mechanism in the House GOP’s bill, even while paying lip service to considering it.

That doesn’t make it benign, however. The Treasury report, compiled with the assistance of 244 different banking industry groups, often cites or lifts directly from bank lobbyist briefing papers. It identifies numerous ways that regulators could go around Congress and significantly undermine the already weakened rules in Dodd-Frank. It’s a wish list for deregulation — but one that could actually get done.

The report was mandated by a February 3 executive order, where President Trump identified core principles for regulating finance. Treasury was supposed to report by June 3 on conforming all financial laws and policies to those core principles. Last month Treasury admitted they couldn’t get such a review done on time, and would instead do it in stages. This report, publicly released nine days after the deadline, only covers banks and credit unions.

But in between that time, the House passed the CHOICE Act, bank lobbyist fantasy legislation that would eliminate most of Dodd-Frank’s core rules. The “choice” in the CHOICE Act, the bill’s signature element, allows banks to opt out of most enhanced regulatory requirements if they maintain a ratio of liquid assets to overall debt — known as the “leverage ratio” — of 10 percent. Every House Republican but one voted for the CHOICE Act.

This put Treasury in a bind, having to pass judgment on the legislation preferred by its party regulars. And in a couple places, they nod to the CHOICE Act, saying that “Treasury supports an off-ramp exemption … for any bank that elects to maintain a sufficiently high level of capital.” But this was almost certainly added in at the last minute. Because elsewhere in the document, Treasury completely contradicts and even savages the types of changes made in the CHOICE Act.

For example, the report asserts that “continual ratcheting up of capital requirements is not a costless means of making the banking system safer,” reflecting the banking industry’s desire to reduce, not increase, capital ratios like leverage. The more debt a bank can play with, the more money they can earn, so banks don’t want to be constrained by high leverage ratios. Treasury has their backs. In that paragraph, at least.

Furthermore, Treasury writes, “a capital regime that is exclusively dependent upon a leverage ratio” — in other words, the one being advocated by House Republicans — “could have the unintended outcome of encouraging risk-taking by banking organizations.” That’s because, under the GOP plan, all debt counts the same toward the ratio, so if banks want to make higher returns, they need to make riskier bets on the debt they take on. The report suggests, instead, a “risk-weighted” system, so as not to “discourage critical banking functions.”

There’s a lot of debate over this point — some experts find risk-weighting overly complex and easily gamed — but the point is that Treasury, while mouthing support for the CHOICE Act’s leverage ratio-dependent off-ramp, is attacking the entire concept of a leverage ratio. Though the Trump administration endorsed the CHOICE Act just last week, one of its most important financial regulatory agencies cut it to ribbons.

Treasury diverges with the House on other parts too. The House GOP wants to eliminate the Volcker rule, a mini-Glass-Steagall preventing banks that take deposits from engaging in risky “proprietary” trading on their own accounts. But Treasury “supports in principle the Volcker rule’s limitations on proprietary trading and does not recommend its repeal.” Both the House GOP and Treasury savage the Consumer Financial Protection Bureau (CFPB), but Treasury pulls back from repealing the agency’s critical ability to police unfair, deceptive and abusive acts and practices — it only says that that authority should be “more clearly delineated.”

Of course, Treasury and House Republicans share a wrongheaded view of financial regulation and its effect on the economy. That’s because both take their cues from the same sources. In an appendix, Treasury lists the organizations and individuals who provided input to them for the report. Sen. Sherrod Brown’s office ran the numbers, finding that Treasury consulted with 14 consumer advocates and 244 banking industry groups, a ratio of around 17-to-1.

You can see this influence in several places. The report goes on a long tangent about reducing regulatory requirements on boards of directors that is lifted from a report by The Clearing House, a major bank lobbyist. The section on CFPB cites the Heritage Foundation four times, the Republican staff of the House Financial Services Committee twice, Cato Institute fellow and Antonin Scalia Law School professor Todd Zywicki twice, a lobbyist for the American Bankers Association, conservative Congressman Patrick McHenry, and corporate law firm Ballard Spahr, which represents numerous financial institutions.

That sets the stage for an orgy of spin and bad-faith arguing. Treasury claims that community banks and credit unions are being strangled by Dodd-Frank regulations, while citing an unbroken trajectory of small bank closures going back to 1984, 26 years before Dodd-Frank’s introduction. The report opposes regulatory fragmentation and overlap and calls for streamlining, but goes after the one Dodd-Frank action that streamlined a fragmentary regulatory framework, the CFPB, as holding too much authority. It blames regulations for low bank growth, not the slow recovery and lack of opportunities to profit. It laments that private mortgage-backed securities are well below the level from 2005-2007, as if the housing bubble should be seen as something to shoot for again.

This leads to a series of recommendations that regulators could accomplish on their own, without waiting for Congress to reach consensus. “A sensible rebalancing of regulatory principles is warranted in light of the significant improvement in the strength of the financial system and the economy,” the report argues, in a literal recounting of how the regulatory pendulum swings toward rolling back rules when people forget crises.

Treasury wants to coordinate bank supervision and enforcement actions spread across multiple regulators, reducing turf wars but also shrinking legal liability for banks. To show what it’s really after here, it wants to cut the FDIC out of the assessment process for living wills, the road maps banks create to unwind themselves in a crisis; the FDIC has been much more stringent on living wills than its counterpart, the Federal Reserve.

The report also calls for eliminating multiple burdens on small banks and credit unions, raising the exemption thresholds for stress tests, capital and liquidity rules, and supervision. But that tailoring doesn’t stop at small banks; even institutions with over $50 billion in assets would likely get relief.

Treasury wants to make stress tests and supervision “more transparent,” which is code for allowing banks to know when examiners will arrive and how to game the process. It also wants to reduce the frequency, with stress tests and living will plans every two years instead of annually. It wants to add multiple exemptions to nearly all capital rules, and would blow enough holes in the Volcker rule (including allowing proprietary trading up to $1 billion) that its support for the idea in principle would not extend to practice. It wants all regulators to engage in cost-benefit analysis in rulemaking, a way to bog the process down in bureaucracy — and to set up targets for lawsuits after the rules are written. It wants to roll back mortgage rules put in for borrower protection after a crisis that resulted in millions of foreclosures. There’s even a reference to targeting the Community Reinvestment Act, the law that makes sure banks lend in low-income communities, the mythical demon many on the right have taken to blaming for the entire financial crisis.

On the CFPB, Treasury recommends making the director removable at will by the president or making the agency a multi-member commission, and putting its funding structure through the appropriations process — all arguments Republicans and bank lobbyists made unsuccessfully during debate over the agency’s creation. But Congress would need to act there; in its place, Treasury supports actions a new director could take unilaterally, like favoring “cease-and-desist” notices over sanctions, making the consumer complaint database secret, and eliminating the agency’s authority to supervise financial institutions.

There’s basically something for every bank of every size here, with enough exemptions, reductions, and referrals back to the lowest common denominator to enable the industry to run wild. And most of it could get done behind closed doors, without a public vote on C-SPAN. “The Trump administration could unilaterally introduce major additional risks to our financial system,” said Americans for Financial Reform Policy Director Marcus Stanley in a statement.

It’s true that fulfilling this industry wish list would take time; regulators would have to traverse the laborious regulatory process to undo the rules, often with multiple agencies having to sign off. Plus, Trump hasn’t appointed key regulators needed to carry this out. But the industry has taken that path before to much success. Dodd-Frank already is a shell of what was envisioned, after insistent lobbying through the legislative and then the rule-making process. The banks will be happy to run the gauntlet again.

Top photo: A trader leaves the New York Stock Exchange after the closing bell on Jan. 7, 2016.