By seating his daughter Ivanka alongside 19 world leaders, Donald Trump made it even more clear that he sees her as his de facto vice president. 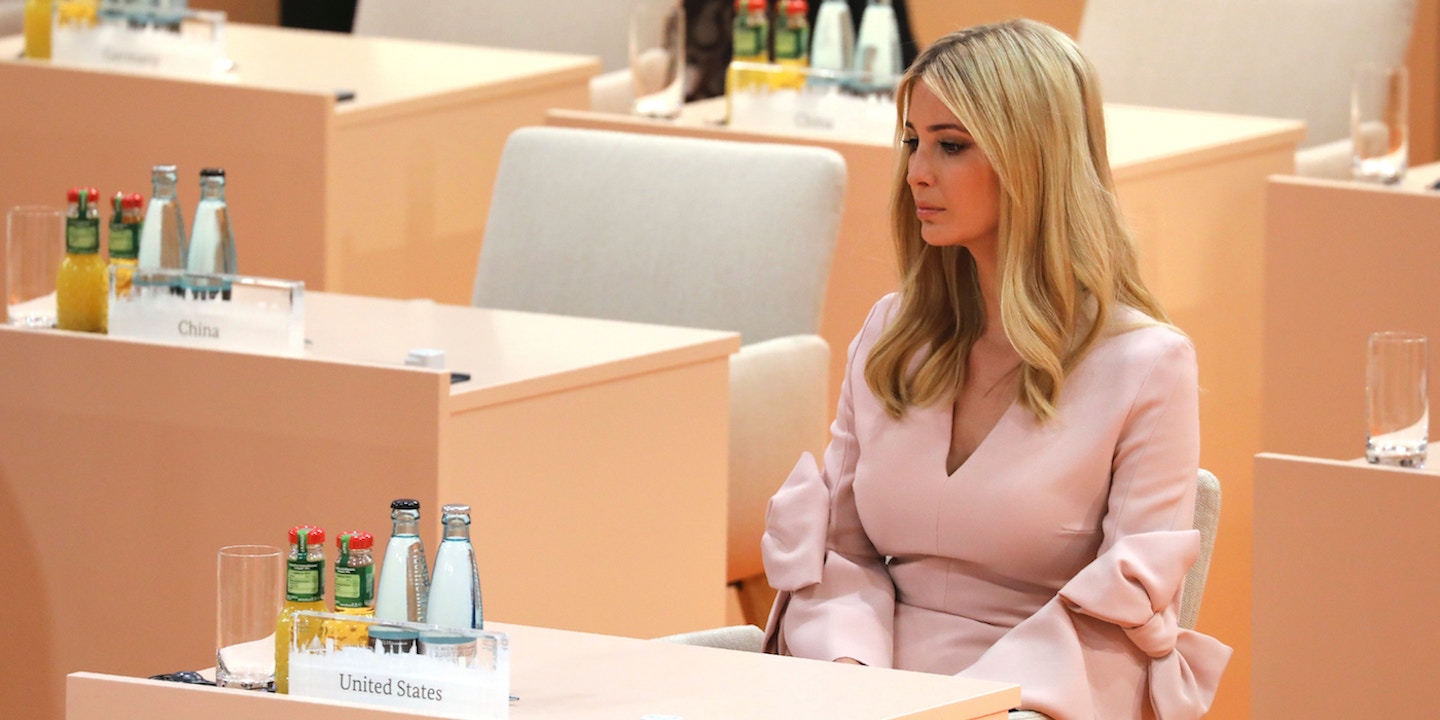 When President Donald Trump decided on Saturday to skip part of a discussion about what the leaders of the world’s 20 largest economies could do to help Africans improve their lives at home — rather than risk them by migrating to Europe — there was no shortage of cabinet members who could have taken his seat between China’s President, Xi Jinping, and the United Kingdom’s Prime Minister Theresa May.

The American delegation to the Group of 20 conference in Hamburg, Germany includes Secretary of State Rex Tillerson, who is fourth in line for the presidency, as well as Treasury Secretary Steven Mnuchin, Commerce Secretary Wilbur Ross and National Security Adviser H.R. McMaster.

That Trump chose, instead, to seat his daughter, Ivanka, alongside the other 19 heads of state, was perhaps the most stunning illustration to date that he sees a complete lack of experience in affairs of state as no barrier at all to treating her as his de facto vice president.

I understand Ivanka Trump is sitting at the #G20 leaders table this morning instead of US President Donald Trump.

The first daughter’s presence at the main table was confirmed in a photograph shared on Twitter — and later deleted from the social network — by Svetlana Lukash, Russian President Vladimir Putin’s representative to the G20. The image shows that German Chancellor Angela Merkel and Turkey’s President Recip Tayyip Erdogan were seated close by during the first daughter’s cameo.

A White House official tried to play down the incident, telling Agence France-Presse that Ivanka had just “briefly joined the main table when the President had to step out.”

However, an official who was in the room told Bloomberg News that she had taken Trump’s place on at least two separate occasions.

Merkel, who somehow managed to get elected Germany’s leader despite not being an heiress, played down the incident when asked about it later.

"She works at the White House & is engaged in certain initiatives" - Angela Merkel on Ivanka Trump at leaders' table https://t.co/1UvsKIrTu9 pic.twitter.com/SNRSdbzV01

American observers, however, were less willing to overlook the implications of the blatant nepotism.

I didn't vote for Ivanka. Neither did anyone. This is not how women of integrity want to see women represented in politics. This is corrupt https://t.co/WXqVMdEnz8

Unelected and unqualified hand bag designer, sitting at a table as an equal with world leaders. America has never looked so ridiculous. https://t.co/Waq4EF0LkM

When @IvankaTrump puts herself in meetings w/ heads of state she embarrasses professional women in public service, our democracy & herself. https://t.co/rbOx7omU9Y

Trump's style is more Uzbek...that of an authoritarian backwater, not a superpower

This kind of thing happens all the time. In dictatorships. https://t.co/CKiLwhvjDz

This could not conceivably have happened in any previous admin.
(VP / SecState / SecTreas / SecDef / Ambass etc would take that chair) https://t.co/Sf8USLQl35

Had Michelle Obama (more qualified than Ivanka) filled Barack's seat at the G-20, the media and the GOP would be calling for impeachment.

Ivanka sitting in for Trump at G20 reminds us that day by day, Trunm is eroding our democracy and turning it into a nepotistic monarchy. pic.twitter.com/MYAuvHs26q

Some of the Trump family’s defenders mistakenly suggested that the image had been taken at another G-20 event held the same day which Ivanka Trump had attended by invitation — the launch of a new World Bank fund to support women entrepreneurs, where she sat between Jim Yong Kim, the World Bank President, and Christine Lagarde, the Managing Director of the International Monetary Fund.

President Trump and Chancellor Merkel attended that event, as seen in video shared by Ruptly, a news agency owned by the Russian government.

When the president later addressed the gathering, he read from prepared remarks, “I’m very proud of my daughter Ivanka.” He then looked up and suggested in an ad-lib that his pride apparently has less to do with any of her accomplishments than her mere existence. “Always have been — from day one, I have to tell you that, from day one, she’s always been great. A champion, she’s a champion.”

The man who inherited his own fortune then added, with no apparent sense of irony, “If she weren’t my daughter, it’d be so much easier for her.”

Trump praises his daughter Ivanka, who sat in for him at a G20 meeting: "If she weren't my daughter it'd be so much easier for her." pic.twitter.com/BSzvoHHsKv

Top photo: The daughter of US President Donald Trump Ivanka Trump sits at the beginning of the third working session of the G20 meeting in Hamburg, northern Germany, on July 8, 2017.