Brisport is running against unchecked development — and backed by the booming membership of the Democratic Socialists of America. The Democratic Socialists of America have a big question to answer — a 24,000-person strong question. According to a recent announcement, that’s how many members the group claims to have, thanks in part to the interest in socialism prompted by the insurgent presidential campaign of Bernie Sanders and as a reaction to the election of a far-right president in Donald Trump. But, as 800 delegates descend on Chicago for the DSA National Convention this week, the group must figure out how its masses of card-carrying socialists will engage in electoral politics.

Local chapters have debated how much energy to put into running for office versus engaging in issue advocacy, and whether to align with Democrats or work on building a new political party. 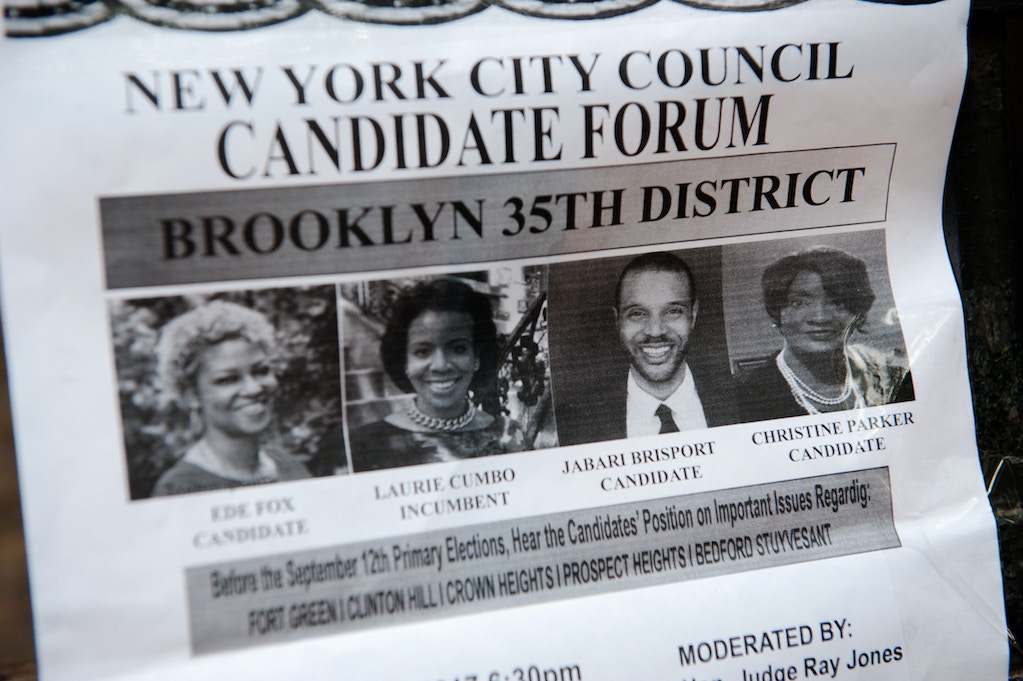 A flyer for a New York City Council candidate forum hangs outside the Epiphany Lutheran School in Brooklyn, NY on July 26, 2017.

Brisport is a 29-year-old African-American artist and activist who was born and raised in the 35th District, which includes portions of Crown Heights, Prospect Heights, and other neighborhoods in Brooklyn. In a wide-ranging interview with The Intercept, he described his motivation for running, and his thoughts on the larger political zeitgeist.

Grassroots politics runs deep in his family — as does radicalism. Brisport’s mother is a former Black Panther. He spent years organizing around local causes, and was an enthusiastic backer of Sanders’s presidential campaign. Unlike Sanders, however, Brisport chose to end his cooperation with Democratic Party after the election.

“Last year, I was really just fed up with the party,” he said. “After Bernie lost the nomination, I decided to moved on out to the Greens — who, honestly, ideologically I’m closer to and are a better fit with me. I was also tired of arguing with other Democrats over things I think are basic, like whether money influences politics.”

The New York City Council’s first-past-the-post elections, where whoever gets the most votes wins outright, running as a third-party candidate is tough. But because Brooklyn is so heavily dominated by Democrats, Brisport is essentially trying to introduce a two-party competition. In doing that, he’s walking a path similar to Kshama Sawant, the Socialist Alternative councilwoman in Seattle who defeated a Democratic opponent on a platform designed around democratizing wealth and power in the city.

Developing Brooklyn Without Pushing Out the Poor

The incumbent in the 35th District is a former art museum executive named Laurie Cumbo, who moved into the district to run for office in 2013. Brisport’s main ideological difference with Cumbo is their divergent approaches to developing Brooklyn.

“Hers is what I’ve seen called the Guggenheim Theory of development, which is that if you bring lots of really glitzy art spaces to an area, really great concert halls, really great art museums, so on and so forth, that’ll bring economic improvement to the area,” he noted. “Which is like a half-truth. Because it brings more wealth and improvement to the area but also pushes out the poor people.”

What Brisport is describing is the process of gentrification, which has swept his part of Brooklyn in recent years, drawing the ire of African-American and West Indian communities in the district. Brisport claims to offer a more democratic form of growth guided by the local community.

“Give more community control,” he suggested, pointing to the redevelopment of the Bedford-Union Armory in Crown Heights. Brisport opposes plans to turn the 138,000-square-foot armory into a bonanza for private developers. Instead, he is supporting residents who want to turn the site into a community land trust. Under such a model, land development would be approved by a nonprofit controlled by the local community.

“People from the community organize into a non-profit, and then you can turn over the land to them, instead of wealthy developer,” he explained. “They can choose who they contract out to. Maybe they’ll contract out to a non-profit. Ultimately, they’ll have final say in the negotiations.”

That same spirit of greater localized democracy runs through the entirety of Brisport’s platform: From expanding participatory budgeting, to requiring police officers to live in the city, to taxing the rich to ensure a more equitable distribution of wealth and power.

Democratic Socialism Americans Can Believe In

One of the challenges of Brisport’s run for office — and for DSA, in general — is defining democratic socialism in a way that Americans will embrace it as a mainstream ideology.

“You tell somebody socialism without hearing somebody describe it, they automatically think government owns everything, takes away your property,” he complained. “It’s not necessarily thinking about it as government. It’s about ‘We The People.’ It’s about having power and agency over how things are guided.”

He cited the financial crisis as an example of how a group of elites were able to negatively impact the lives of millions of people without facing democratic accountability.

“In 2008, when the banks crashed the economy, we can’t vote out the CEOs of those banks, we have no say over those bankers,” he noted. “However, if an elected official messes up the economy, you can vote them out. You have a say.” 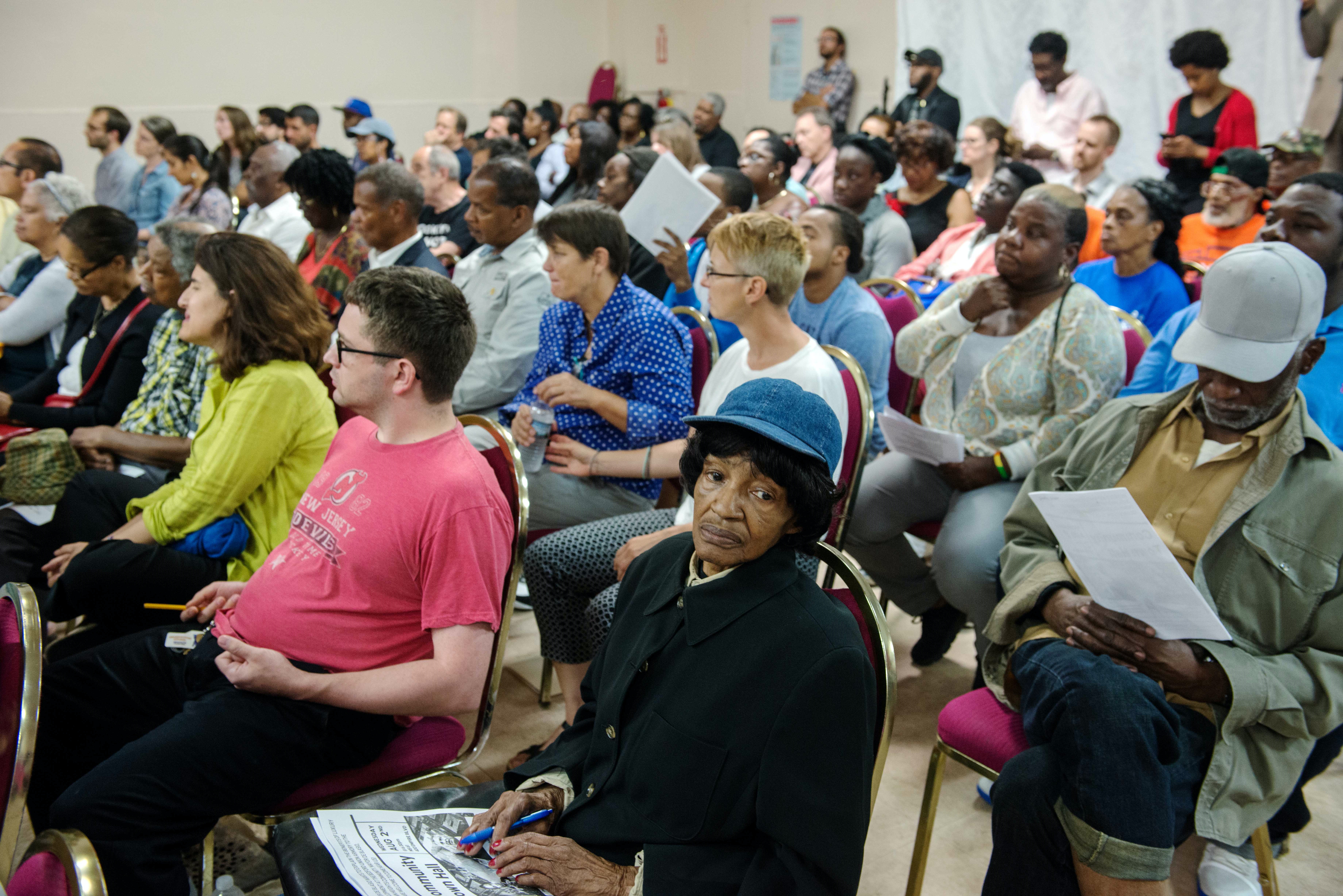 A crowd gathers for a New York City Council candidate forum inside the Epiphany Lutheran School in Brooklyn, NY on July 26, 2017.

One of the obstacles Sanders’s presidential campaign faced in his race against Hillary Clinton was the strong loyalty shown by older African-American voters to the establishment of the Democratic Party. The only cohort of the black electorate Sanders won was the youngest. The establishment party candidates also made strong showings among these voters of other ethnic backgrounds in races against populists. In his re-election bid, Chicago’s Mayor Rahm Emanuel, for instance, counted on strong black support to beat back challenger Chuy Garcia in his Democratic primary. Sanders-backed Tom Perriello suffered from a deficit among black voters in the Virginia Democratic gubernatorial primary.

For Brisport’s part, these shortfalls came largely thanks to a coordinated campaign by the party’s establishment and the deep Southern ties held by Clinton and her husband, the former Arkansas governor President Bill Clinton.

“The Democratic Party weaponized identity politics a little bit against Bernie Sanders,” he said of last year’s presidential primary. “As soon as he started losing the South, they made this whole thing of him not connecting with black voters. Which is insane. Because like, if Coke was really doing well in the South over Pepsi, nobody would be like, ‘Well, I guess Pepsi is having trouble connecting with black voters!'”

However, he also said Sanders should have adjusted his approach to appeal to a wider set of voters. “Bernie also is a little bit guilty,” he conceded. “At some point, he failed to move things outside of an economic lens. I think he was asked this one question at a debate that was like, what’s your biggest blind spot as a white person. He said, when you’re white you don’t know what it’s like to be poor. I don’t know how he got to that conclusion.

“I love Bernie. I would vote for him 10 times. But I’m not sure what he was going for with that statement,” Brisport continued. “I think his bigger blinder was seeing so much from an economic lens, when you do need a mixture of an economic approach and an approach toward marginalized groups. When I said weaponized identity politics earlier, I don’t mean to say I’m anti-identity politics. I understand their role. It’s a double-edged sword. It’s something to be addressed not something to be used as character assassination.”

Brisport’s criticism matches that of Khalid Kamau, a DSA-backed socialist candidate who won a city council seat in South Fulton, Georgia, in the spring.

“I love Bernie, but I think where his campaign failed — I don’t think this is a personal failure of Bernie, but perhaps of the people that were around him and advising that campaign — is that there wasn’t enough attention paid to people of color,” Kamau told Truthout in March. “I am not sure that people of color who were in that campaign were listened to the way they should have been.” 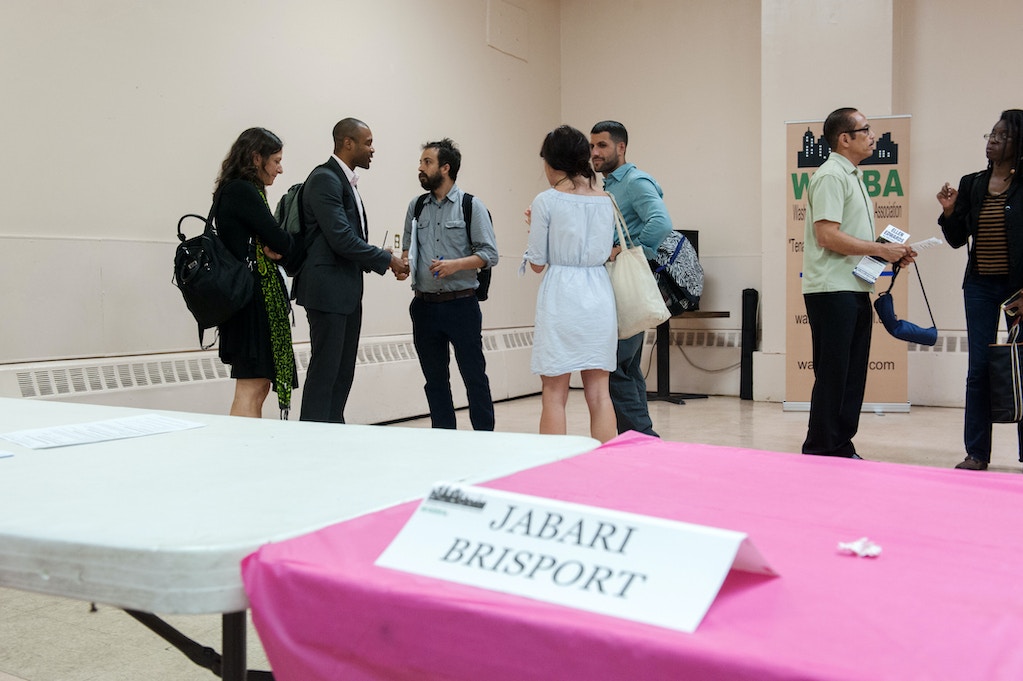 Going forward, Brisport believes the best way for democratic socialists to build a truly multi-racial movement is to show up and support communities of every background.

“DSA is multi-tendency. It’s electoral but also fighting lots of different battles: housing, immigrant justice, climate, labor rights, strike solidarity, education,” he explained. “What they’ve been really great at doing is going into these conflicts where the community is fighting. And not only allying themselves with the local community, but amplifying them and also taking a backseat. Not like coming up and saying, ‘We’re DSA, we’re running this.’ But also saying how can we amplify what you do?”

New York City’s 2,000-member strong DSA chapter has put its money where it mouth is in diversifying the movement. So far, both of the candidates it supports for city council races comes from non-white backgrounds. In addition to Brisport, DSA voted to endorse the Rev. Khader El-Yateem in his Democratic primary in Brooklyn’s diverse Bay Ridge neighborhood. El-Yateem is a Palestinian Christian and a supporter of the Boycott, Divestment, and Sanctions (BDS) campaign — a bold stance in a city known for its stridently pro-Israel politics.

“El-Yateem is Trump’s worst nightmare. He supports immigrants, is Arab-American and explicitly refuses to take money from developers,” NYC-DSA Co-Chairwoman Rahel Biru said in a statement.

Brisport has seen the difficulties in organizing people of different ethnic backgrounds into one movement firsthand. He pointed to disputes between Caribbean-Americans and Jewish-Americans in Brooklyn over housing as an example.

“There’s a general sense in the community that the Jews are buying up the land and controlling everything,” he said of complaints he’s seen in the Caribbean community. “Which is upsetting.” He added, “It’s almost like what I saw Trump do. He saw people’s real concerns about an economy that was failing them and shifting it over to Muslims and Mexicans.”

Brisport’s goal is to end racial infighting and unite his diverse district behind democratic socialism.

“What I tell people is gentrification isn’t caused by white people, it’s caused by capitalism,” he said. “If you de-commodify the land and you take the profit motive away, then we can actually fight against this.”

Top photo: Jabari Brisport, a 29-year-old actor-turned-activist-turned-member of the Democratic Socialists of America, poses for a portrait in Brooklyn, NY on July 26, 2017.