The 15th anniversary of his visionary exhibit demonstrates that Mesches was ahead of his time in using redacted documents in his art.

On August 6, 1956, Arnold Mesches had over 200 paintings stolen. When he returned to his Los Angeles art studio that day, the building’s glass front door was shattered. Someone had broken in. The paintings were gone, including a 30-painting set dedicated to Julius and Ethel Rosenberg, whose trial and execution he had protested. He suspected it was the FBI.

In 2000, his suspicions were confirmed. Using a Freedom of Information Act request, Mesches obtained a box filled with his own 760-page FBI file, discovering that from 1945 to 1972, he’d been carefully watched. Throughout his life as an acclaimed painter and activist, the FBI had been keeping tabs on his personal life, places he lived and worked, book shops he visited, protests he attended, and more.

Hundreds of informants had passed through his life. Some were friends, lovers, neighbors. Others posed as local artists. One was a student hiding a camera in his tie. Sometimes it was “a comrade in a meeting, an asshole buddy you trusted with your heart and being, a confidant whose life torments were deeply intertwined with your own, the trusted friend who sat next to you at a funeral,” Mesches wrote in 2001.

Even with his FBI file in hand, the artist still had no information about the 200 missing works, but could draw his own conclusions: The pages covering three months before and after the break-in were missing entirely from the file. Hundreds of other bits were redacted, as well, mostly in thick black marker. The visual power of those redactions resonated with Mesches. He thought they were beautiful and decided to turn the files into artwork. Today, those works feel eerily prescient.

Fifteen years ago this month, in September 2002, Mesches (who died last year) opened “The FBI Files,” an exhibit of 40 collages and one painting, layering the pages of his own file with magazine clippings, illustrated texts, photographs, and paintings. The result, at the MoMA P.S. 1 arts space, was not just a portrait of his own lived experience, but a series of unconventional illustrations of a moment in American cultural history, a collection of pieces brimming with personal philosophy and critical thought. Where the words are not hidden by government redactions, they are elsewhere covered up by, or juxtaposed with, movie posters, celebrities, slick advertisements, images of Malcolm X, the KKK, and Playboy covers — all working together to tell multiple stories of violence, control, and power. 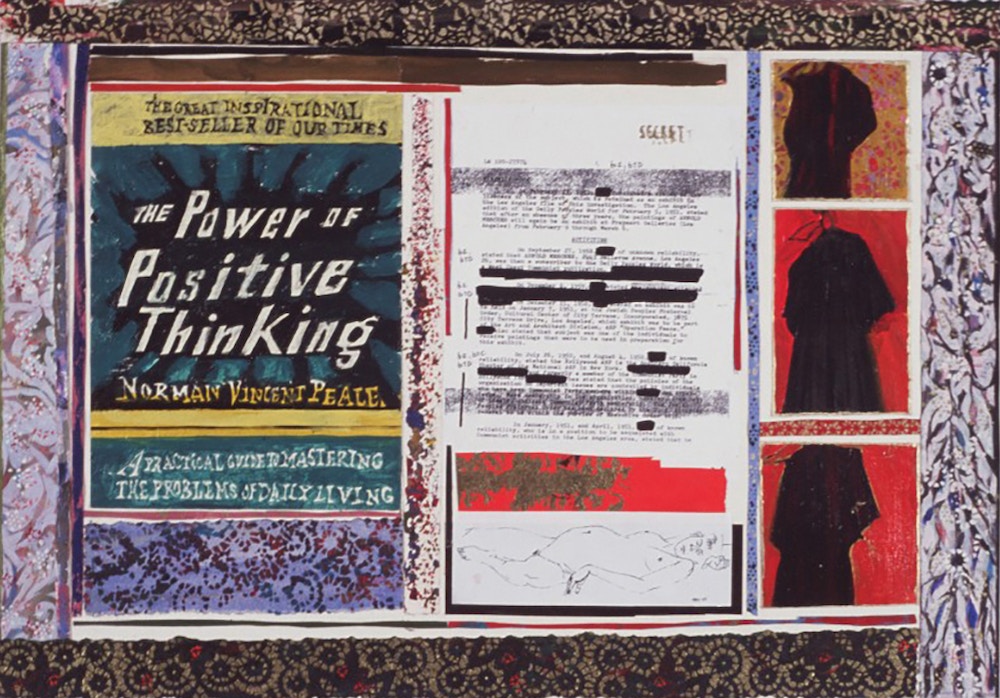 On the 15th anniversary of the exhibit, it’s become clear that “The FBI Files” was ahead of its time. As life in America has become increasingly defined by post-9/11 surveillance, FBI files have emerged as a surprising yet legitimate medium for artistic expression. The pervasiveness of being watched by the state creates a vast anxiety, our world filled with concrete artifacts of declassified and leaked materials. As more artists have embraced these primary documents over the past decade and a half, their artistic processes have filled in the gaps created by government redactions.

Earlier this year, Sadie Barnette’s exhibition “Do Not Destroy” featured her ex-Black Panther father’s extensive FBI files, which she decorated with glitter, rhinestones, and pink paint, re-imagining them as a cross-generational family story. In 2004, Jenny Holzer began using declassified government files, projecting them onto the sides of buildings and referencing them in her “Dust Paintings.” In her 2016 Whitney Museum exhibition, “Astro Noise“, Intercept co-founding editor Laura Poitras included excerpts from her FBI file, too. Each of these works takes a different approach at creatively critiquing the pervasiveness of government surveillance, as each of these artists’ relationships with surveillance differ. But it is telling of the surveillance state we live in that these types of works are emerging as common and compelling, allowing artists to interpret and amplify the histories that the authorities don’t want you to hear.

Born in the Bronx, Mesches moved to Los Angeles as a teenager to study advertising design, but dropped out of college. He learned more from his personal practice of painting and protesting. He was working in Hollywood painting sets when studio workers famously went on strike in 1946. “I came out of that strike politically aware, determined, more than ever, to make socially relevant art,” he once said, according to an essay on his art by Howard Zinn, who explains that Hollywood had become “a glamorous target” for the House Committee on Un-American Activities.

Perhaps the most moving aspect of “The FBI Files” is the way Mesches’s work as an expressionist painter seeps in from the edges of these collages; these are emotional works, with equally distributed moments of sadness, intimacy, horror, humor, and emptiness. Many of the pieces are overwhelmingly beautiful. There are pink-hued pages, vivid colors, and broad strokes, abstract shapes and lines echoing the blacked-out redactions.

Over the years, Mesches’s paintings (featured in over 100 solo shows, and at many major art institutions) depicted social unrest, war, and violence. “My paintings are about the frailty of existence, the social tensions of our day, erosion, silence, madness, values, distance, comedy, ridicule and anger,” he wrote in a 1997 text surrounding an exhibition in Florida, where he lived for many years. With “The FBI Files,” his own life experiences shed further light on the stories he’d spent his life interrogating through art.

It makes sense that in 2014, when Mesches was 91 years old, selections from “The FBI Files” were exhibited once again at the Life On Mars Gallery in Brooklyn. When Mesches made these works, he called them “illuminated manuscripts,” using paint and ink and mixed media to depict the government tracking his every move. In doing so, his work illuminates even more: the surreal conditions of surveillance we continue to live under today.