Members of the Senate Banking Committee on Tuesday interrogated Wells Fargo CEO Tim Sloan about his response to a fraudulent account scandal that engulfed the bank last year. Unconvinced that the bank has cleaned up its act in the last year, Sen. Elizabeth Warren, D-Mass., told Sloan he should lose his job.

Regulators fined Wells Fargo $185 million in September 2016 for opening 2 million bank and credit card accounts without customers’ knowledge between 2011 and 2015. The bank revealed earlier this year that an additional 1.4 million bank accounts were fraudulently created in a scandal that dates back to at least 2009. Sloan defended his company and his position there during his Senate testimony, saying that company executives and employees had been held accountable for their involvement.

In a familiarly testy exchange, Warren effectively accused Sloan of securities fraud. She produced years of transcripts of investor calls, in which Sloan, then chief financial officer, forcefully touted Wells Fargo’s sales growth, a good portion of which was created with fake accounts. “I can’t wait to get a credit card in every one of our creditworthy customers’ wallets,” Sloan said to investors in 2011.

At the time, Sloan also held 2 million shares of Wells Fargo stock, Warren noted, so he had a personal interest in highlighting sales growth to boost the stock price and his personal wealth.

Even after the Los Angeles Times detailed the high-pressure sales culture at Wells Fargo in 2013, Sloan “went back to pumping up the stock price by bragging about sales growth on the next investor call,” Warren said.

Sloan acknowledged he made no move to investigate problems at the bank after the L.A. Times story, claiming that he wasn’t given details. But as The Intercept reported last October, just three months before the Consumer Financial Protection Bureau fined Wells Fargo $185 million for fake accounts, when the bank was well aware of the issue, Sloan responded to a question from American Banker about whether the sales culture had gone too far by saying that “the fundamental strategy that we have is not going to change.”

Warren concluded: “You should be fired. … Wells Fargo is not going to change with you in charge.” 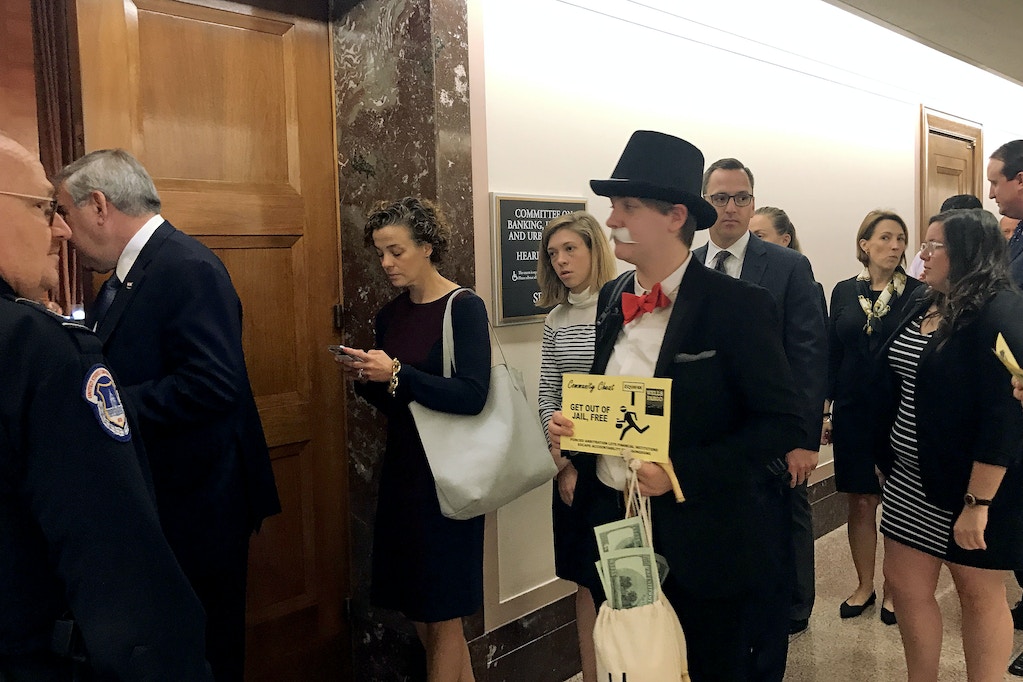 Outside the hearing on Capitol Hill, activists protested the financial industry’s use of arbitration clauses, which effectively force consumers to forfeit their right to a day in court. As The Intercept reported last week, Republican senators are scrambling to get enough votes to overturn a CFPB rule that bars companies from forcing consumers into arbitration.

Activist Amanda Werner dressed as Monopoly’s Rich Uncle Pennybags stood outside the hearing room handing “get-out-of-jail-free” cards out to senators, hoping to get one into Sloan’s hands ahead of his testimony.

“Wells Fargo uses forced arbitration clauses to block consumers from suing them for their misconduct in court,” Werner said. “So these get-out-of-jail-free cards represent the Republican attempt to keep that in place by repealing the CFPB arbitration rule.”

The CFPB arbitration rule bars companies from forcing their customers to forfeit their right to a day in court, effectively including a clause in the contract that allows the consumer to be ripped off. In a press conference last week, Senate Minority Leader Chuck Schumer compared passing a repeal on CFPB’s rule to “the equivalent of Republicans handing out a get-out-of-jail-free card to Wells Fargo and to Equifax.”