Left-Wing Drexel Professor Who Opposes Free Speech Has His Curtailed

Drexel University placed a professor on leave for his provocative statements, citing security risks. But the move raises concerns over free speech rights. 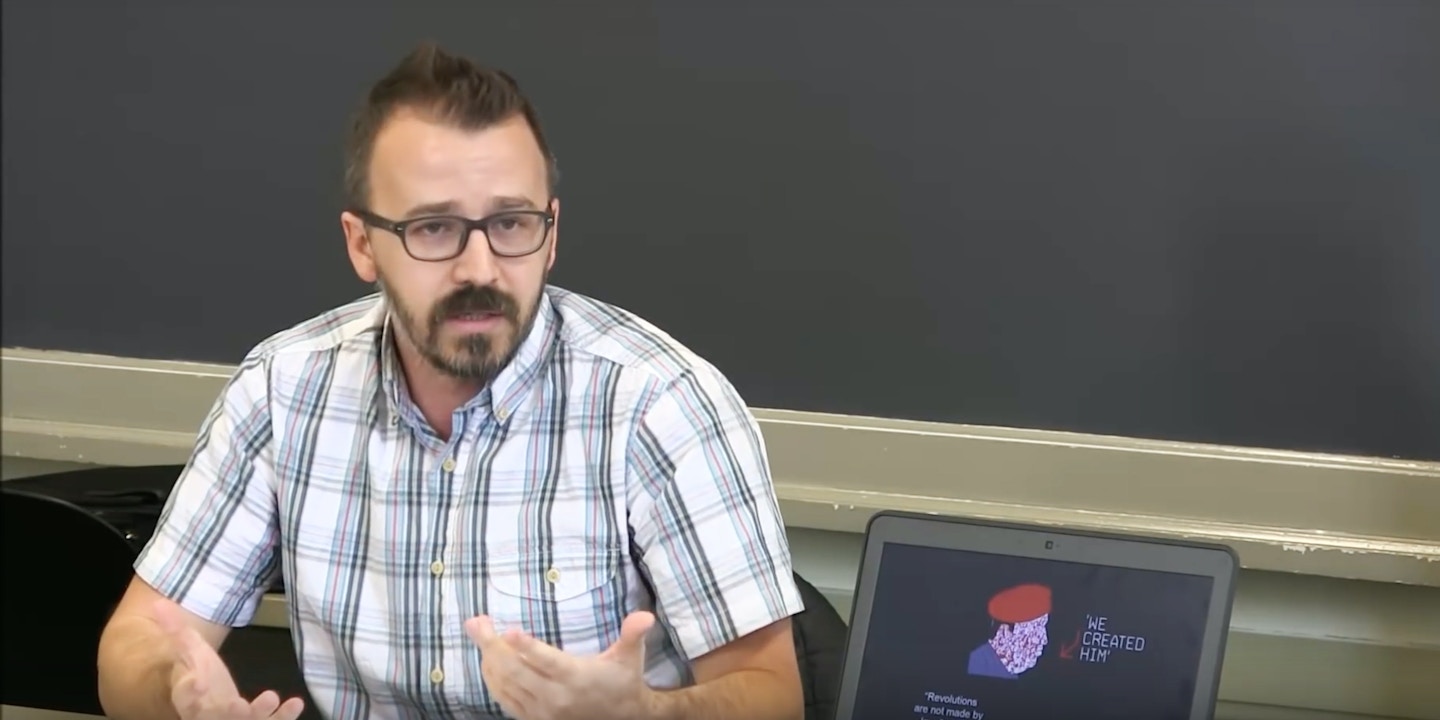 George Ciccariello-Maher, a Drexel University associate professor of politics and global studies, is no fan of free speech.

He uses his Twitter account to rail against the American Civil Liberties Union that defends speech rights even for the most noxious of speakers. He has called for other individuals to be fired from their jobs for offensive speech. And he has blocked critics on Twitter — such as this reporter — who say his approach goes too far. (The blocking, in fact, is mutual.)

Ciccariello-Maher is explicit. “We don’t have to stand up for the free speech of eugenicists, racists, and bigots to speak and certainly not  the privilege to have access to a platform on campus to spout their kind of hatred,” he said about his campaign to stop Charles Murray from speaking at a nearby campus, during a conversation on free speech on the It’s Going Down Podcast in May.

The ACLU has long argued that it defends even the most odious speech because once some speech is curtailed, it isn’t long before it creeps your way. The truth of that axiom came at Ciccariello-Maher fast.

Ciccariello-Maher’s Twitter feed is a long litany of provocative statements — ranging from admitting he wanted to “vomit” when a student offered a seat to a soldier to his recent claims that gun control was irrelevant to the Las Vegas shooting because it was in fact the result of “white supremacist patriarchy.”

He doesn’t even particularly mind people assaulting white nationalist activists like Richard Spencer. He has also called for police officers to be killed, encouraged people to riot, and endorsed vigilante mass murder.

These social media missives are often highlighted in right-wing media, which sets off a stream of abuse and invective toward Ciccariello-Maher.

Through all of this, his university has not tangibly sanctioned him in any way, but has condemned his comments — which itself is a soft restriction on speech anathema to the academic tradition. Last December, after he tweeted that “when the whites were massacred during the Haitian revolution, that was a good thing indeed,” Drexel put out a brief statement distancing itself from him: “While the University recognizes the right of its faculty to freely express their thoughts and opinions in public debate, Professor Ciccariello-Maher’s comments are utterly reprehensible, deeply disturbing, and do not in any way reflect the values of the University.”

This month, the school went further, placing Ciccariello-Maher on administrative leave. On Tuesday, he wrote an op-ed for the Washington Post denouncing the move:

By bowing to pressure from racist internet trolls, Drexel has sent the wrong signal: That you can control a university’s curriculum with anonymous threats of violence. Such cowardice notwithstanding, I am prepared to take all necessary legal action to protect my academic freedom, tenure rights and most importantly, the rights of my students to learn in a safe environment where threats don’t hold sway over intellectual debate.

The Intercept asked Drexel why specifically it chose to put the professor on administrative leave. Niki Gianakaris, the university’s executive director of media relations, told us that it was for “his safety and the safety of Drexel’s community”:

The safety of Drexel’s students, faculty, professional staff and police officers are of paramount concern to Drexel. Due to a growing number of threats directed at Professor George Ciccariello-Maher, and increased concerns about both his safety and the safety of Drexel’s community, after careful consideration the University has decided to place Professor Ciccariello-Maher on administrative leave. We believe this is a necessary step to ensure the safety of our campus.

The Foundation for Individual Rights in Education, a free speech nonprofit based in Philadelphia, has been monitoring Ciccariello-Maher’s case for months.

Adam Steinbaugh, a senior program officer and investigative reporter at FIRE, pointed to Drexel’s internal review of Ciccariello-Maher’s public musings and offered some skepticism toward their justification.

“Skepticism is certainly warranted here. Drexel claimed publicly that Ciccariello-Maher specifically, and faculty in general, enjoy freedom to express their thoughts and beliefs. In private, Drexel launched an investigation into the propriety of his views — an investigation that has apparently remained open since February,” he noted.

“If Drexel wants to be credible as an institution that protects academic freedom, then it must be transparent,” he continued. “Vague invocations of safety and references to ‘growing threats’ are not enough. While it shouldn’t be required to publicize details that might risk an active investigation, it should explain the nature of the threats, the steps it has taken to mitigate the risk (short of exiling a professor), and what — if any — law enforcement agencies it has involved.”

Steinbaugh also worried that silencing a professor is more or less giving into the threats.

“That a lot of people are angry is a poor basis to silence a speaker,” he said. “When threats are made with the goal of silencing a speaker, taking institutional action against the speaker will demonstrate that threats will accomplish their goal. ”

Perhaps unsurprisingly, Ciccariello-Maher did not respond to a request for comment from this reporter. An editor at The Intercept reached out to him for comment. He asked who would be writing the story, and when he learned the answer, he didn’t reply further.