Philippine President Rodrigo Duterte, who hosts Donald Trump this weekend, says he once stabbed a man to death just because he looked at him the wrong way. 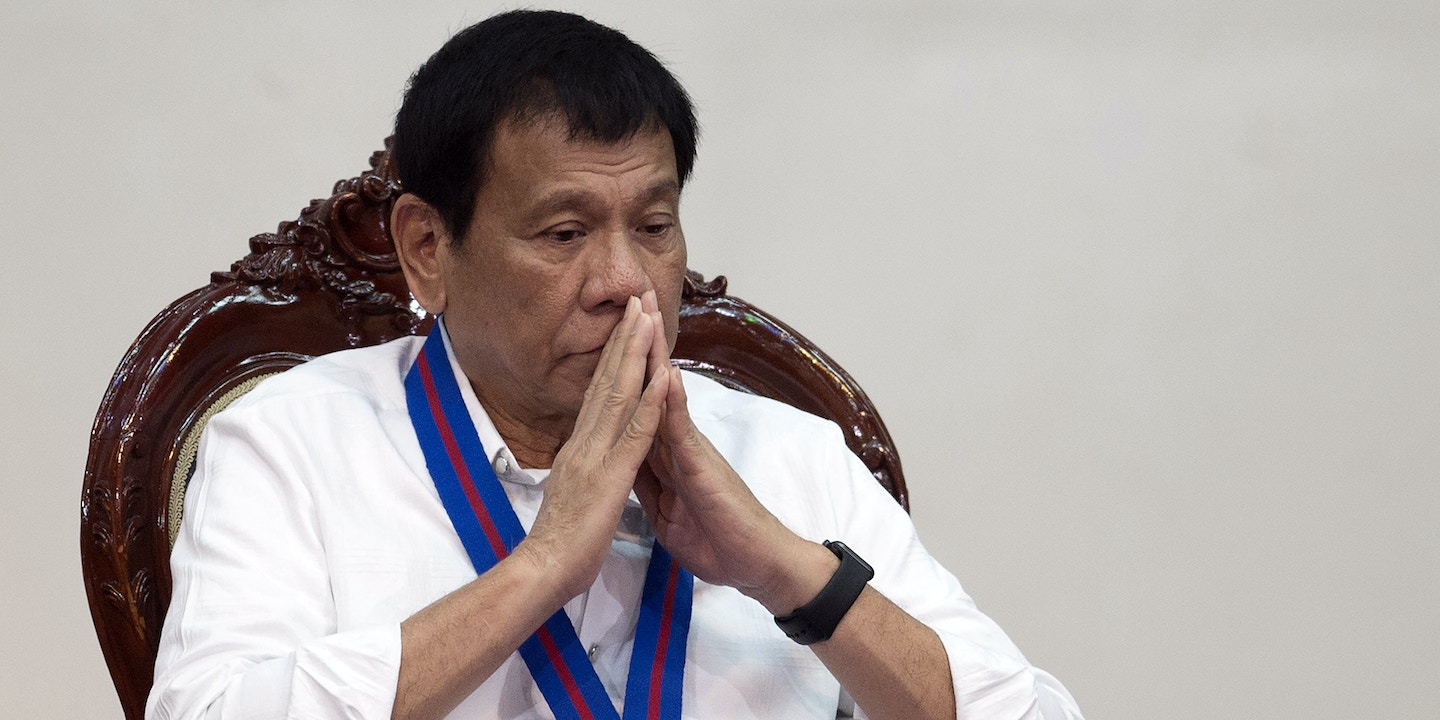 Philippine President Rodrigo Duterte, whose bloody war on drugs has led to the deaths of more than 12,000 Filipinos, boasted on Thursday that he is no more concerned with killing now than he was at the age of 16, when he said he stabbed a man to death just because he looked at him the wrong way.

Duterte, who is preparing to make President Donald Trump feel at home in Manila this weekend, made the remarks in an address to Filipinos living in Vietnam, where he was attending an Asia-Pacific Economic Cooperation summit.

According to the Filipino news site Rappler, Duterte’s boast was made to illustrate that he had no fear of going to jail for overseeing his government’s rampage against suspected drug dealers and users, which has been widely criticized by human rights groups.

“When I was a teenager, I would go in and out of jail,” Duterte said in remarks posted on YouTube by his office. “I’d have rumbles here, rumbles there.”

“How much more,” Duterte asked rhetorically of his willingness to kill, “now that I am president?”

“You fuck with my countrymen, I won’t let you off the hook,” he added, mixing English and Tagalog. “Never mind about the human rights advocates.”

Trump’s predecessor, Barack Obama, had canceled a scheduled meeting with Duterte last year after the Philippine president was asked how he might deal with criticism of his killing spree from the American president and responded with a profanity-laced tirade, in which he promised to call Obama a “son of a whore” to his face.

Speaking to reporters before he left Washington last week, Trump badly distorted that recent history, mistakenly claiming that his predecessor was “not exactly welcome” in the Philippines.

As The Philippine Star reported, Duterte renewed his complaints about Trump’s predecessor in his remarks on Thursday, calling Obama “so black and arrogant.”

Duterte has good reason to expect that Trump will not make his bloody rule an issue during the visit. In April, a leaked transcript showed that Trump called Duterte to congratulate him on doing an “unbelievable job on the drug problem,” as my colleagues Jeremy Scahill, Alex Emmons, and Ryan Grim have reported.

Duterte’s spokesperson later claimed that the president’s boast about his murderous youth, which was met with peals of laughter from his supporters, might have been some sort of joke.

Pres spox @attyharryroque on Pres Duterte’s claim that he killed someone as a result of a gang fight at the age of 16: “I think it was in jest. The President uses colorful language when w Pinoys overseas” @gmanews pic.twitter.com/mqFdS5XbxD

That repeats a familiar pattern, since Duterte has frequently made crude boasts about inflicting violence on his enemies or suspected criminals, delighting his hardcore fans, only for his spokespeople to later claim the remarks were in jest.

Duterte and Trump, who has adopted a similar strategy to excuse outrageous remarks spoken in earnest as jokes after the fact, could perhaps compare notes in Manila this weekend. During last year’s presidential campaign, Trump famously boasted that his supporters were so loyal that, “I could stand in the middle of Fifth Avenue and shoot somebody, and I wouldn’t lose not lose any voters.”