“They didn’t want to give the NYPD any reason to come back and keep spying on us. They were afraid. We were all afraid.” Within minutes of the Friday prayer ending, volunteers at Masjid Omar in Paterson, New Jersey, hurried congregants along and began rolling up the tarps that had been laid out in the mosque’s courtyard to accommodate overflow. It was a familiar process, and the worshippers cooperated. Most got up immediately, found their shoes, and hurried out; only a few lingered. The coordinated exit appeared to follow a standing policy at Masjid Omar.

Sayfullo Saipov, who drove a truck through a bike line in Lower Manhattan on Halloween, killing eight people, lived directly behind Masjid Omar and regularly prayed there for the past three months, according to two members of the local Muslim community. Paterson boasts one of New Jersey’s largest and most vibrant Muslim and Arab populations, according to Census data in recent years. Strings of halal meat shops, Arab- and Muslim-owned restaurants, lively cafes, and at least five other mosques dot the map within just a few miles of Masjid Omar. On Fridays, the peak day of the week for Muslim houses of worship, many of the mosques in the area remain open between prayers, bustling with young people and serving as a holistic community center. But not Masjid Omar.

On Fridays, many of the mosques in the area remain open between prayers, serving as a holistic community center. But not Masjid Omar.

In February 2012, Masjid Omar was named in some of the early revelations of the New York Police Department’s dragnet surveillance program on Muslims in the metropolitan area, according to the Associated Press. The mosque had been added to the NYPD’s long list of Muslim houses of worship to surveil in 2006, even though the NYPD’s report on the mosque did not indicate that any suspicious individuals attended or that criminal activity had occurred there. Undercover agents sent to Masjid Omar recorded conversations and took note of worshippers’ license plate numbers and ethnic backgrounds, according to AP.

After the surveillance targeting Muslim communities was exposed in a Pulitzer Prize-winning Associated Press series, the NYPD claimed its spying was an effective way to weed out terrorism. However, the department itself admitted the surveillance did not bring about productive leads. The story of the October 31 attack in New York City bears out the ineptitude of the program: Saipov, who had moved to New Jersey just a few months ago, had been reportedly worshipping at Masjid Omar.

The NYPD spying also had a deleterious effect on the communities that were put under surveillance. Several mosques — Masjid Omar being one — responded to the exposure of the NYPD program by minimizing their activities and slashing resources for their programs. Without these programs, which introduced a social atmosphere to mosques, community bonds could weaken. And, despite continued prayer services at Masjid Omar, suspicions linger that undercover agents might be mingling among worshippers. Men participate in Friday Prayer at the Masjid Omar on Feb. 24, 2012, in Paterson, N.J. The New York Police Department had come under renewed criticism following revelations that officers crossed into New Jersey to conduct surveillance on Muslims.

Youness Zohd, who lives and works in Paterson, has been a regular worshipper at Masjid Omar for nearly a decade. He recognized Saipov’s face from the mosque but, due to the restrictive structure of Masjid Omar, hadn’t socialized or engaged with him — or, for that matter, any of the mosque’s newcomers. Zohd, who continued praying at the mosque, noticed the drastic changes after the surveillance scandal broke at Masjid Omar. (Disclosure: Several years ago, as a child, I sporadically attended Masjid Omar community activities at the invitation of friends.)

“Before we found out about the surveillance, we would sit together after prayers and keep up with each other’s lives,” said Zohd, 36. “If someone needed something, we got together and helped him. But now, if we try to sit in the mosque after the prayers and talk, the mosque’s leaders tell us to go home or to go hang out at the cafes.”

“They didn’t want to give the NYPD any reason to come back and keep spying on us. They were afraid. We were all afraid.”

Zohd believes that the changes in the mosque’s structure, which were only reinforced after the surveillance became public, were protective measures taken by the mosque’s leaders. “They didn’t want to give the NYPD any reason to come back and keep spying on us,” Zohd said. “They were afraid. We were all afraid.”

Eliminating extracurricular mosque activity and adopting pacifist and exaggerated patriotic speech are common strategies that many mosque leaders adopt in response to surveillance. The Friday after the Halloween attack, Abdelkhalik Elnakib, the imam of Masjid Omar, made it a point to completely dissociate himself and the entire Masjid Omar community from Saipov and his actions. He centered his 20-minute sermon around a verse in the Quran that has been tokenized over the years and is often dug up in response to violent events.

“We grieve for them,” Elnakib went on, speaking of the victims’ families. “We feel the emotional impact of this tragedy.”

As in the aftermath of so many attacks by individuals who share their faith, Muslims in the U.S. can feel pressure to emphasize the peacefulness of their lives and affirm their love for America. The sentiment was on display at Masjid Omar after the Halloween attack. “There is no enmity between us and the American people,” Elnakib said. “What makes them grieve makes us grieve, and what makes them happy makes us happy. If they are in pain, then we are in pain.”

The exclamations can turn conspicuous in their breadth. Elnakib praised America’s health care system and — ironically, for a mosque that was targeted for little more than its creed — its freedom of religion. He said the freedoms Muslims couldn’t find in the “Muslim world,” they found in America.

Yet the undue scrutiny on many American Muslims has curtailed some of the freedoms their government is said to enshrine. Mosque leaders often fashion their houses of worship as “apolitical” spaces, eschewing discussions of social injustices against their own communities, such as the war on terror, FBI entrapment, institutionalized racism, government surveillance, and police brutality. 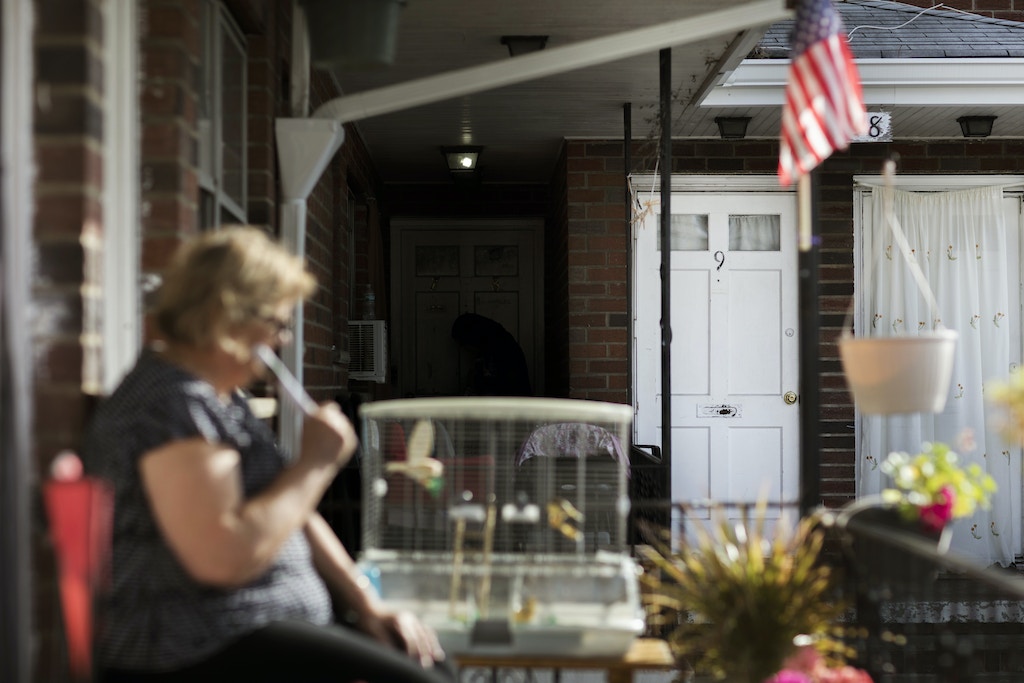 A neighbor of Sayfullo Saipov, the suspect who drove a truck on a bike path of Lower Manhattan, sits on her porch across from his apartment in Paterson, N.J., on Nov. 03, 2017.

Surveillance eats at the fabric of Muslim communities, said Sahar Aziz, a professor of national security, civil rights, and Middle East law at Rutgers University Law School. Without safety and privacy, Muslims’ places of resource and spiritual refuge become places of fear and cynicism. “We’re punishing them” — Muslims — “and denying them fundamental right to a safe, spiritual, and resourceful space,” Aziz said. “And we’re not even making society safer in doing that.”

The key to understanding the ill effects of this spying lies in a distinction made by Aziz between targeted surveillance of reasonably suspicious individuals and blanket surveillance of entire mosques. The latter is an ineffective method of finding out potential terrorists, she said, with Saipov’s case being the most recent example.

“To expect the Muslim community to be able to weed out dangerous people is a heavy and unfair burden.”

“Saipov was a lone wolf,” said Aziz. “Lone wolves keep their plans to themselves. There was no way to predict that Saipov would’ve done what he did. Just because you prayed next to someone, that doesn’t mean you can predict their next move. To expect the Muslim community to be able to weed out dangerous people is a heavy and unfair burden.”

One of Saipov’s neighbors, who spoke on the condition of anonymity for fear of backlash, told The Intercept they had been interviewed repeatedly by the FBI since the Halloween attack.

“It was as though they expected me to know something or to have an idea of something, but you guys know more than I do,” the neighbor said, between chuckles, referring to both the news media and law enforcement. “You found out about this before I did. I came home from work and didn’t figure it out until I saw everyone in our lot” — the parking lot of the small apartment complex where Saipov and his neighbor lived. “I think we’re all looking for a reason, but I’m just as confused. I don’t have a reason for it either.”

The neighbor, who is also Muslim, described Saipov’s family as kind, generous people. Their children often played together, and their wives swapped pots of traditional food. Days later, the neighbor was still unable to wrap his mind around the incident, unable to picture the same Saipov from the apartment complex carrying out the heinous attack.

Experts on counterterror law enforcement said there are deep problems in asking civilians — neighbors and community members — to spot potential terrorists when even authorities had failed to make the necessary connections.

“It’s a flawed notion that civil society can point out potential terrorists,” said Michael German, a former FBI special agent who specialized in domestic terrorism and covert operations. “The FBI investigated several people like Tamerlan Tsarnaev, Omar Mateen, and Nidal Hasan, who later went on to commit violent acts. If the FBI couldn’t pinpoint them as suspicious, then how do you expect civil society to do that? That’s not their job.”

Mass surveillance programs are ineffective and damaging to the Muslim community, German said, and the excessive secrecy surrounding them undermines government accountability. The unprecedented power to collect information, he added, can also become an impediment in trying to identify the most useful potential threads: When several mosques are being surveilled simultaneously, information piles in excess, making it more difficult for law enforcement officers to do their job.

Lone-wolf attacks, like Saipov’s, are not new, but they are rapidly increasing, jumping from just two in the 1950s to more than 35 so far in the 2010s. Encouraging coordination between Muslim and Arab communities and law enforcement to identify lone wolves makes the dangerous assumption that these communities are aware of suspects — one of the cornerstones of Islamophobia — and merely lack the incentive to turn them in. Nonetheless, if that is the goal, it’s a tack made more — not less — difficult by widespread surveillance of Muslim communities; the partnerships and coordination, after all, would need to be based in trust.

“It’s disingenuous of the government and law enforcement to claim coordination between themselves and the Muslim community if they’re still surveilling them and expecting collaboration from them,” Aziz said. “If the government wants to earn the trust of the Muslim community, they’re going to have to give them the freedoms and rights to privacy that all other groups in the U.S. enjoy.”

Top photo: Men walk out of Masjid Omar, the place of worship attended by Sayfullo Saipov, the suspect who drove a truck on a bike path of lower Manhattan, in Paterson, N.J., on Nov. 3, 2017.