Professor Joseph Mifsud might be a serial exaggerator or a hanger-on, but he does rub elbows with global leaders.

Boris Johnson, the British foreign secretary, was photographed last month with Joseph Mifsud, the Maltese professor who allegedly tipped off former Trump campaign adviser George Papadopolous in early 2016 that the Russian government had “dirt” on Hillary Clinton, in the form of “thousands of emails.”

The image, posted on Facebook by a British-Indian associate of Mifsud, Prasenjit Kumar, appears to have been taken on October 19 at a Conservative Party fundraiser in Reading, outside London. Eleven days later, when court documents revealing Papadopolous’s guilty plea were unsealed, the previously obscure Mifsud became the focus of international attention. 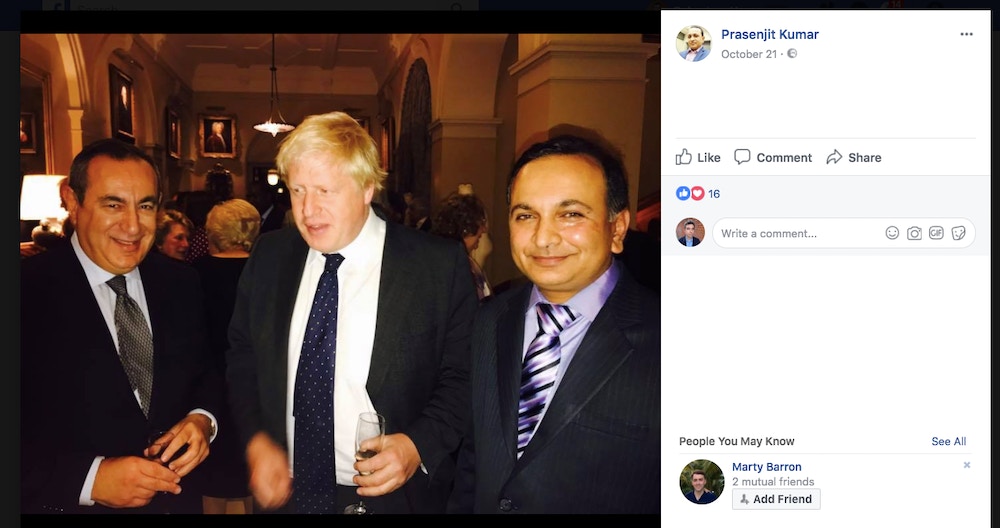 Before the event, Mifsud had boasted in an email to a colleague seen by London’s Observer newspaper that he would be “meeting Boris Johnson for dinner re Brexit,” on that date. Alok Sharma, a Conservative member of parliament who worked with Johnson in the Foreign Office until June, confirmed to The Observer that he had spoken to Mifsud at the event and that Johnson was a featured speaker.

Kumar makes a habit of posting photographs of himself with senior political leaders on Facebook. Another entry on his timeline shows him posing with Prime Minister Theresa May in July. Kumar’s account also includes an image of himself with the president of Malta, posted in August, and another, from July, showing him, and Mifsud, posing with two men identified as members of the Albanian parliament.

Before the image of Johnson with Mifsud was discovered on Saturday by Gavin Sheridan, an Irish journalist, the Foreign Office told Byline, a crowdfunded journalism site, that the foreign secretary had never “knowingly met this person, planned to meet this person, or indeed ever heard of this person.” That Johnson, drink in hand, was looking down and away as the photograph was snapped suggests that the encounter could well have been a fleeting one, and very unlike the kind of “meeting” Mifsud had described.

Sheridan, a former social media reporter for the news agency Storyful, came across the image while digging into the online profile of another figure who had presented herself to Papadopolous as a potential conduit to the Kremlin, Olga Polonskaya, who was introduced to the Trump adviser by Mifsud.

As Sheridan reported on Twitter, he found a Facebook page in Polonskaya’s name among Mifsud’s friends on the social network last month, immediately after the Papadopolous indictment was unsealed. That page was altered early on Saturday, after The New York Times identified Polonskaya as the 30-year-old from St. Petersburg Papadopolous initially mistook for a niece of Russian President Vladimir Putin. (Politico reported a day earlier that Papadopolous had referred to her in a campaign email by her maiden name, Olga Vinogradova.)

Before Polonskaya’s page was changed, however, Sheridan archived a copy of the profile — which previously used two slightly different transliterations of the Cyrillic letters of her last name: both Polonskaya and Polonskaia. A screenshot of a Facebook page in the name of Olga Polonskaya before it was altered on Friday.

The Polonskaya account is what led Sheridan to Kumar’s page, since, before the privacy settings were altered, he was able to see that she had liked two updates Kumar had posted — images of himself posing with Boris Johnson and Theresa May — as well as the Facebook page of the United States consulate in St. Petersburg.

Like Mifsud, Kumar is involved in the administration of professional training programs that bring overseas students to the United Kingdom for courses of questionable academic merit. Kumar is currently director of the London School of Executive Training, which offers “short-term executive courses” to what its website describes as “the variety of audiences including Business Leaders, Bureaucrats, Politicians, Lawyers, Law Interns, Bankers, Trainee Students – Law, Management and Hospitality sectors, Faculties and other professionals.”

The LSET has “a partnership” with the London Academy of Diplomacy, which is directed by Mifsud.

Although the LSET had only five students at the time of an inspection in 2014, it has a 10-person board of governors. One of those governors, Charles Chatterjee, currently serves as director of LSET Academic Standards and Quality. According to his website, Chatterjee was also once “co-director of London Academy of Diplomacy,” the defunct organization run by Mifsud.

Another LSET governor, Dr. Prem Sharma OBE, is a veteran Conservative Party activist and the father of Alok Sharma, the former Foreign Office minister who greeted Mifsud at the fundraiser in Reading he attended with Kumar.

On Saturday evening, Kumar told Carole Cadwalladr of The Observer that he did know Polonskaya. She struck Kumar as “just a normal student” when he met her at Link Campus University, a for-profit college in Rome where Mifsud was based.

Kumar said that he had last seen her in August, when Polonskaya called him and they met at a shopping center in London, apparently to discuss a Russian-language translation of his school’s website, “so I could try and attract more Russian students.” Polonskaya produced the translation, Kumar said, although he has yet to post it.

Corporate records available online show that Kumar was previously the director of a series on now-shuttered for-profit educational ventures. Two of those institutions, Preston University and Halifax University, were rebuked by British officials in 2004 for misrepresenting themselves as accredited universities in the United Kingdom. Another school run by Kumar, Albert College, was criticized in 2007 for advertising a law course an English university said it had no right to offer.

Kumar’s biography on the LSET website identifies him as “the think tank behind the success of a group of Colleges for the last 14 years,” and the former “President and Chancellor of a US based University.” As Scotland’s Sunday Herald reported in 2007, when Kumar was the director of Halifax College in London, that school shared a name and crest with a branch of Halifax University based in Wyoming. American educational officials reportedly warned students at the time that the Wyoming school was not authorized to grant degrees.

Also in 2007, the Chronicle of Higher Education reported that the Wyoming branch of Preston University had been forced to move part of its operations to Alabama, following “a crackdown on diploma mills in Wyoming.” Six years before that, The Chronicle added, Preston had been “caught pretending that it employed professors that it, in fact, did not.”

Kumar’s practice of associating himself with leading politicians could be related to the promotion of his schools. In 2004, when Preston University and Halifax University were reprimanded for misleading students, reports focused on the fact that the schools had brought in the deputy leader of the Conservative Party at the time, Michael Ancram, to hand out diplomas and medals to students. A prospectus for Preston University produced later featured photographs of Ancram at the ceremony, along with another Conservative member of parliament, Peter Luff, and a former winner of the Miss World beauty pageant, the Indian actress Yukta Mookhey.

“All official academic documents are embossed with the Preston University seal,” the school’s website said at the time. “These documents also have a covered letter sealed by the Department of Education, State of Wyoming USA.”

For an additional fee, the school offered to have the degree “legalized by the Foreign and Commonwealth Office in London, where it will be signed by an official on behalf of Her Majesty’s Government.”

Kumar told the BBC at the time that this was not intended to mean that his institution was offering British degrees, which would have been illegal, but simply meant that the Foreign Office in London would verify that the certificates, seals and stamps he provided to students were genuine.