One of the appointed officials overseeing Puerto Rico’s government said last week that he hoped the island would finally accept a range of austerity measures after Hurricane Maria, likening the island to “the alcoholic who hits rock bottom and says, ‘OK, we’re bankrupt now, and we really got to change the way we’re doing things.'” 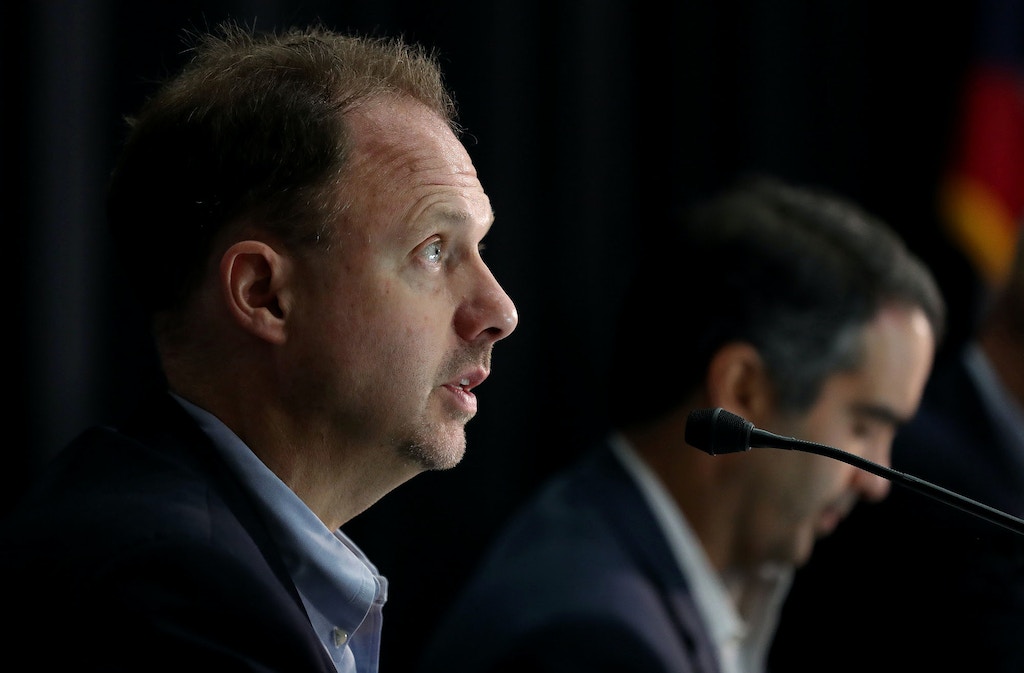 The comments were made by Andrew Biggs — a resident scholar at the American Enterprise Institute and a Republican member of PROMESA, a board created last June to oversee Puerto Rico’s finances — at an event hosted by AEI to discuss the island’s future after the hurricane disaster.

Biggs discussed what he described as the structural barriers for Puerto Rico’s recovery: minimum wage laws, labor rules requiring just-cause termination, paid sick days for employees, paternity leave, and overtime pay. Even a planned Christmas bonus for employees is problematic, he noted. The labor rules that govern Puerto Rico, Biggs said, are part of an “inherited political culture” from its time as a Spanish colony, which must be reshaped to ensure an economy recovery.

“The reality is, the government doesn’t want to do these things,” he said of labor changes. “If you let them not do them, they won’t do them.” The AEI scholar argued that any additional financial aid from Congress should be contingent on revamping and repealing the island’s welfare and labor regulations.

“I mean, I don’t want to sound pejorative, but I hope this would be like the alcoholic who hits rock bottom and who says, ‘OK, we’re bankrupt now, we really got to change the way we’re doing things.'”

Biggs also suggested extending benefits to islanders in exchange for their help with reconstruction. “A problem with labor supply on the island is the phase out of welfare benefits,” he said. “Congress could say, for the next year or so, anybody who’s receiving, you know, food stamps or TANF (Temporary Assistance for Needy Families), or whatever on the island, if they go to work in some job that is related in some way to the reconstruction on the island, that for some period, they would not suffer a phase-out of their benefits.”

At the end of the panel discussion, Desmond Lachman, another official at AEI, declared, “One doesn’t want a good crisis to go to waste.” Lachman compared post-hurricane Puerto Rico to other countries that have sought International Monetary Fund assistance after “hitting rock bottom.” “They realize they don’t have an alternative,” Lachman said, and “all the difficult kind of reforms” are made “when their back is against the wall.”

The comments were made amid a growing push to implement far-reaching, business-friendly policies in Puerto Rico. As The Intercept reported, there is an effort to use the devastation wrought by Maria to privatize the island’s schools, using a model similar to the widespread charter school reforms that were implemented in New Orleans after Hurricane Katrina.

Republicans in Congress also called last week for Puerto Rico to use natural gas for its energy needs, The Intercept reported. Two senior lawmakers viewed as close to the fracking industry, Reps. Glenn Thompson, R-Penn., and Doug Lamborn, R-Colo., used a hearing to call for the island to revamp its energy needs through natural gas. “We need to look at environmental regulation waivers” to implement energy policy on the island, Lamborn added.

The Biggs remark provoked the ire of Héctor Figueroa, president of 32BJ SEIU and part of VAMOS4PR, a network of labor and community groups in the states fighting for an economy fair for all Puerto Ricans.

“Biggs’s remarks reveal where his sympathies lie, and it is not with Puerto Rico’s working families,” said Figueroa. “He actively seeks to punish people who have lost their homes and their jobs in the wake of Hurricane Maria. We demand that Biggs and the rest of the board, instead of drawing callous analogies, zero-out the island’s debt payment to truly give Puerto Ricans the help they need.”

Top photo: Board member Andrew G. Biggs speaks at a meeting for Puerto Rico’s Financial Oversight and Management Board at the College of Engineering and Surveyors in San Juan, Puerto Rico, on Oct. 31, 2017.