“Puerto Rico has the potential of being the Hong Kong of the United States,” said Rep. Louie Gohmert at a House Committee on Natural Resources hearing. 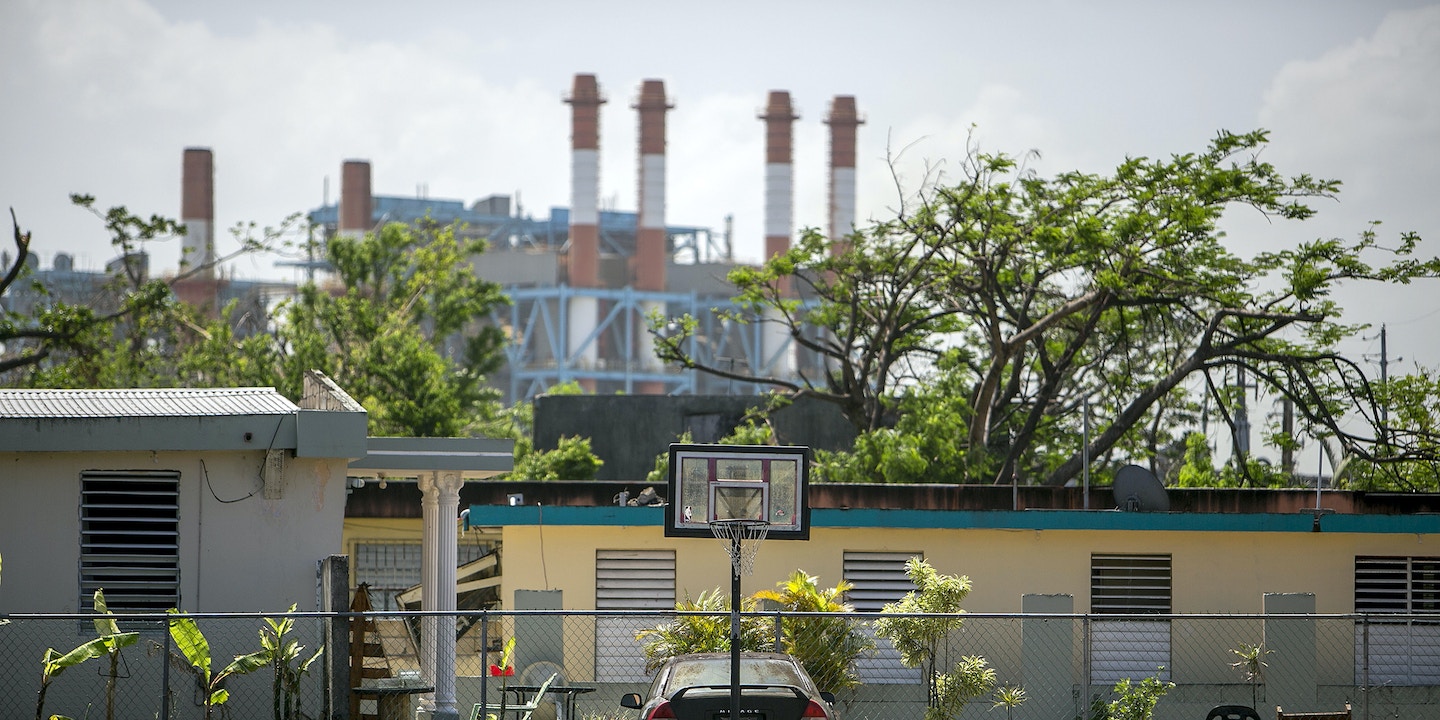 The House Committee on Natural Resources convened this week to discuss Puerto Rico’s ongoing hurricane recovery efforts. They talked devastation, debt, and regulations, and somewhere along the way, Rep. Louie Gohmert, R-Texas, made a statement that would have been easy to miss if you weren’t listening closely: “Puerto Rico has the potential of being the Hong Kong of the United States, where businesses would flood in there.”

Hong Kong, in this case, is code for lax labor laws and low taxes on corporations and the wealthy — an economy structured mainly around pleasing the private sector. If Tuesday’s hearing was any indication, that’s exactly the path a cadre of House Republicans and federally appointed officials in Puerto Rico are eager to take the island down post-Hurricane Maria, with a special eye toward fossil fuel development.

It’s not the first time Gohmert has made such a claim. On Tuesday, congressional representatives heard from the executive director of Puerto Rico’s fiscal oversight board, a body installed by Congress in the summer of 2016 to help deal with at least $74 billion in municipal debt, through a bill known as PROMESA. In hearings in the lead-up to that bill’s passage, Gohmert was more explicit about the idea he reiterated this week. “Puerto Rico ought to be the model for how free markets could work,” Gohmert said in April 2016. “It could be the United States’s Hong Kong, because there is no federal income tax. All it would need is to streamline and not have such a bloated government.”

“If it were not for all the government workers,” he added, “there would be no need to have a … higher corporate tax than the United States itself has. … I would think that if you could get it down to around 12 percent, business would be flocking.”

As this week’s hearing showed, several members of Congress are eager to push Puerto Rico down the path of becoming a playground for neoliberal policies. Several committee members asked point-blank how Congress could help ease the way to bring more fossil fuels to the island.

“Maria gives us the opportunity to bring Puerto Rico’s infrastructure into the 21st century. How can innovative energy technology, such as fuel cells that utilize our nation’s resource of clean-burning natural gas, be used to revitalize the Puerto Rico energy grid?” Rep. Glenn Thompson, R-Penn., asked board representatives of Congress’s role. Thompson is co-chair of the House Natural Gas Caucus and has taken more donations from oil and gas companies than from any other industry over the course of his career.

“We would be excited to bring all those solutions to the table and incorporate any of those good ideas — those fantastic ideas — into our transformation plan,” responded Noel Zamot, who was tapped by the fiscal control board shortly after Hurricane Maria to oversee the Puerto Rico Electric Power Authority, or PREPA, “with all the powers of a CEO,” per Tuesday’s hearing. Both Zamot and the board have been explicit about their intent to privatize the beleaguered utility. (Whether he can officially commandeer the utility remains to be decided and was a big topic of conversation at the hearing.)

Several other committee members expressed their excitement about bringing more liquified natural gas to Puerto Rico. “Renewables are great, but to provide that much electricity in that short a time is unrealistic. So I’d welcome a discussion about LNG,” said Rep. Doug Lamborn, R-Colo., who later suggested that “we need to look at environmental regulation waivers” for rollbacks.

Natural Resources Committee Chair Rob Bishop, R-Utah, who presided over the hearing, has previously argued against extending Environmental Protection Agency regulations to Puerto Rico on the grounds that doing so could inhibit natural gas development on the island. Bishop also spent a large chunk of his career attempting to open up America to more oil and gas development. His latest push is to dismantle the Antiquities Act, a 1906 provision giving the president the authority to preserve public lands from development by declaring them national monuments. The oil and gas industry has donated generously to Bishop’s campaigns, and in Puerto Rico particularly, Bishop has been gung-ho about bringing more natural gas into the island’s energy mix. Before PROMESA was passed last summer, Bishop introduced legislation to make fossil fuel development a central part of Puerto Rico’s debt restructuring process.

Post-Maria, he may get another chance. Just after the storm barreled through Puerto Rico, Bishop called to waive the National Environmental Policy Act for the island, exempting restoration and rebuilding efforts from regulatory oversight. The stated purpose of yesterday’s hearing was to “[make] sure that the oversight board has the tools they need” and identify “arbitrary roadblocks” to Puerto Rico’s recovery that Congress “could address in some way. … If Puerto Rico is ever going to economically recover and become vibrant,” he added, “it has to have reliable and affordable energy.”

Asked what steps the federal government could take to “restore the prosperity that Puerto Rico should naturally enjoy,” fiscal control board Executive Director Natalie Jaresko responded that — beyond immediate relief — “with regard to tax reform, you need to look to design something that encourages U.S. companies to stay and even grow their manufacturing operations” in Puerto Rico.

There’s reason to think that fossil fuel firms could make out particularly well as Puerto Rico attempts to rebuild. In 2013, the U.S. Geological Survey discovered an estimated “19 million barrels of undiscovered, technically recoverable oil and 244 billion cubic feet of undiscovered natural gas” directly south of Puerto Rico and the Dominican Republic. It’s not a huge haul compared to other oil-dependent regions, but it could still be seen by energy companies as an opportunity in the aftermath of Hurricane Maria, as both Congress and the fiscal control board seem more willing than ever to both suspend environmental regulations, slash taxes, and pass more corporate-friendly policies.

Post-Maria, shock doctrine-style ideas have abounded among conservative think tanks and lawmakers. Benjamin Dierker, of the libertarian Foundation for Economic Education, wrote a blog post in early October calling for the establishment of an “economic freedom zone” in Puerto Rico, to be put in place after absolving at least $74 billion in municipal debt. “The zone would flatten or suspend numerous taxes and regulations, prompting an immediate increase in productivity,” he wrote. “The less restricted environment with more available resources would open the doors to investment and real estate development.” Dierker argued explicitly to “suspend or streamline” environmental regulations and lift the federal minimum wage in the name of establishing a “lean, honest, and efficient local government” that can “capture business that would be regulated away in the States.”

Desmond Lachman, a resident fellow at the American Enterprise Institute, has made a similar case. He contended that the island’s recovery depends upon undertaking “fundamental economic reforms to make its economy very much more competitive and very much more attractive than it presently is to outside investment. Such reforms are particularly needed in the area of labor market and welfare reform.” He further suggested sending “2-3 highly respected US mainland economists” to consult with “2-3 highly respected Puerto Rican economists” in crafting a plan for the island, swapping large-scale debt forgiveness for corporate-friendly economic reforms — “an IMF-style program,” as Lachman put it.

As The Intercept’s Naomi Klein has detailed, profit-driven opportunism isn’t unique as a way of dealing with disasters in America — natural or otherwise. One of the most famous examples of this was in Iraq shortly after the U.S. invasion in 2003, when the Coalition Provisional Authority — under the direction of L. Paul Bremer — implemented a range of free-market policies, including the privatization of state-owned industries and a dramatic slashing of personal and corporate tax rates from around 45 percent to just 15 percent. Iraq, as Bremer put it, was “open for business again.” Still more relevant to Puerto Rico’s situation was a similar plan that unfolded in the wake of Hurricane Katrina, when now-Vice President Mike Pence convened a meeting at the Heritage Foundation to map out a list of 32 “Pro-Free-Market Ideas for Responding to Hurricane Katrina and High Gas Prices,” including the nearly wholesale privatization of the city’s school system.

What’s unique about Puerto Rico is that PROMESA has in many ways laid the groundwork for Katrina-style, post-storm transformations to happen along potentially even faster timelines. Title V of PROMESA, for instance, outlines a process by which environmental and social reviews can be expedited in case of an emergency. As Bishop stated on Tuesday, the main purpose of this week’s hearing was for the Natural Resources Committee to affirm it has the fiscal control board’s back in the bankruptcy-like court proceedings where Puerto Rico’s financial future now sits. While Congress gave the board near total control over the island’s finances and governance, when it moved to put the debt in front of a U.S. District Court judge — a process also outlined in PROMESA — it gave up some of its abilities to call shots on the island. Several policy decisions now rest with Judge Laura Taylor Swain in New York, meaning that when the board wants to make big changes — like appointing Zamot as PREPA’s emergency manager — it can’t simply will those decisions into law.

All that said, debt proceedings don’t seem to be slowing down either the control board or Republicans’ plans to turn Puerto Rico into a theme park for corporations, sans democratic oversight. Toward the end of Tuesday’s hearing, progressive Rep. Luis Gutiérrez, D-Ill., posed a blunt question to Zamot about his role in PREPA: “Do you believe that you’re supreme? [That] you’re a dictator over everyone?”