Just one month after the open secret of Harvey Weinstein’s predation was exposed, the “Weinstein effect” has become a well-established piece of the media vernacular.

The idea of a “Weinstein effect” is in part predicated on the idea that Weinstein’s overdue dethroning presents us with a replicable blueprint for challenging abusers and harassers in positions of power. It’s a model that already has had some success in the media and entertainment industries, among others. But for one demographic of rape and sexual assault survivors, the renewed and urgent public interest in redressing sexual violence offers no replicable template. The “Weinstein effect” has not, and perhaps cannot, reverberate through prison walls.

“Prisoners do not have access to the media outlets or social media platforms that have helped make sexual assault a national topic of conversation,” said Jesse Lerner-Kinglake, communications director for Just Detention International, a human rights organization that seeks to end sexual abuse in prisons, jails, and detention centers. “And even if an incarcerated survivor had an opportunity to speak on the record to, say, a Ronan Farrow” — who wrote the New Yorker story about Weinstein — “about his or her plight, it would likely lead to swift and severe retaliation from corrections staff.”  He noted that, while journalists and social media platforms should be looking for ways to make incarcerated people’s stories public, “the barriers facing inmates are especially great.”

A national conversation about structurally enabled sexual violence in this country needs to address prisons and detention centers. According to a 2012 Justice Department report, an estimated 200,000-plus people are sexually abused in U.S. detention centers every year, with nearly half of all reported instances citing prison guards or staff as the alleged abuser (these are only the reported cases in a context of notoriously underreported incidents). Only about 10 percent of allegations were even followed by an investigation; only 1 percent of prison staff found to have engaged in sexual misconduct were subjected to criminal conviction.

This low number is especially disturbing given that under law, any and all sex between corrections officers and the incarcerated people they oversee is considered rape. But the letter of the law’s recognition of the coercive power dynamic between a prison guard and a prisoner has little relevance in a system in which that very power imbalance keeps victims silenced, ignored, and routinely disbelieved. (The New York City Correction Officers’ Benevolent Association declined to comment on the issue, and the New York State Correctional Officers & Police Benevolent Association did not respond to my requests for comment.) 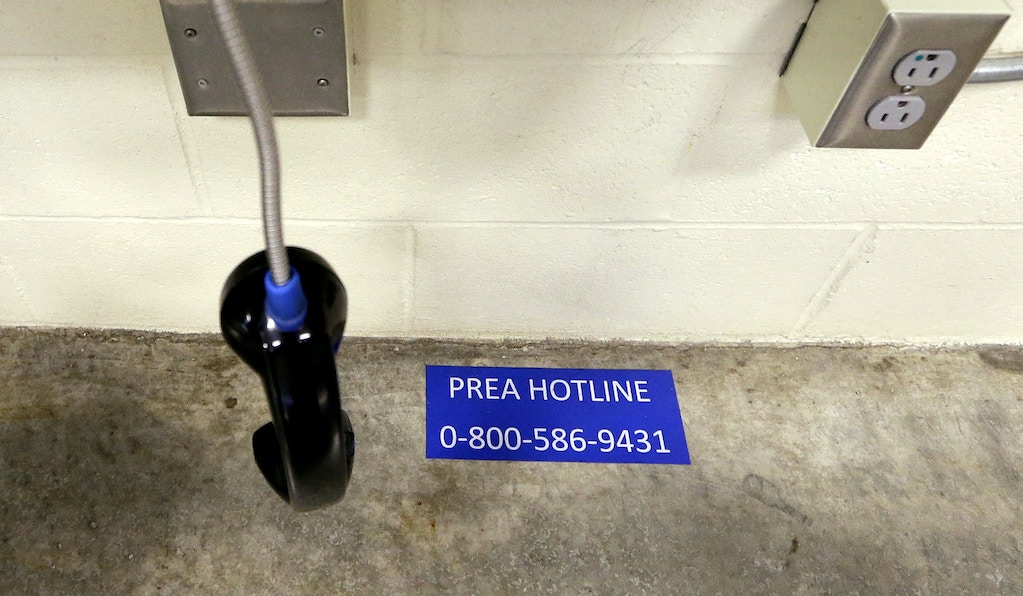 In this photo taken Oct. 17, 2014, the Prison Rape Elimination Act hotline number for offenders to call is pasted on the floor under a bank of phones at the Washington Corrections Center for Women in Gig Harbor, Wash.

“We need to remember that sexual violence has been part of the prison system since it started, but this has been unnoticed and unhighlighted,” Victoria Law, an Intercept contributor and author of “Resistance Behind Bars: The Struggles of Incarcerated Women,” told me. Survivors attempting to report predators in powerful positions can always expect negative consequences, Law explained, but in prisons the challenges are unique. “In these cases,” she said, referring to assaults by prison officials, “the person you’re trying to speak out against has the keys to your freedom.”

Fear and threat of retaliation undergirds the prevalence of sexual violence in prisons and detention, as does the popular belief that incarcerated people should not be trusted or believed. Retaliation can take many forms in detention. There’s the threat of further violence, as well as possible interference into “all the little things that make life behind bars bearable,” said Law. “There’s a very lengthy process once you file a complaint, and once you have, you might notice that your mail comes up missing, or your cell is suddenly subjected to searches — which means they turn everything upside down, throw your belongings on the floor, or maybe your mom comes to visit and has to wait for hours.”

When incarcerated people do try to speak out, the attackers rarely suffer consequences. Law pointed me to New York City Board of Corrections statistics, announced in a September meeting, which found that of 828 reports of sexual assault in New York City jails last year, 786 had yet to be investigated as of a few months ago. “Prisoners have no place to run or hide from a rapist,” wrote Lovisa Stannow, executive director of JDI, in a recent Los Angeles Times op-ed. “There are limits to the parallels between sexual abuse that happens in the workplace and in detention,” she noted; these assaults are frequently set in “a tiny, windowless room far away from anyone who is willing to keep you safe.”

Prison rape also complicates the way we talk about power, gender, and the role of men in our discussions of sexual violence.

LBGTQ individuals, particularly transgender women in male prison populations, are especially vulnerable to sexual assault and victimization in prison. In the name of their safety, these victims are often isolated or placed in solitary confinement, which, as Law told me, only “ensures physical safety and the expense of mental safety.” Meanwhile, women are 30 times more likely to become a victim of sexual assault in prison compared to on the outside, according to the Bureau of Justice Statistics cited in The Nation in 2015. But prison rape also complicates the way we talk about power, gender, and the role of men in our discussions of sexual violence.

When the #MeToo social media campaign took off in the wake of the Weinstein revelations, there was some debate as to whether the hashtag should be used by straight, cisgender men to talk about their histories of sexual victimization. An understandable desire surfaced: to emphasize the stories of those most at risk, namely cis and trans women and other non-straight, non-cis people.

Prison presents a different demographic of survivors. Most victims of the prison rape epidemic are men, simply because most incarcerated people are men. That there is sexual violence among this mostly male population should come as no surprise. As Law put it, “Sexual assault is not about sex, it’s about power and domination. And in prison, there’s a lot of power and domination and violence.” 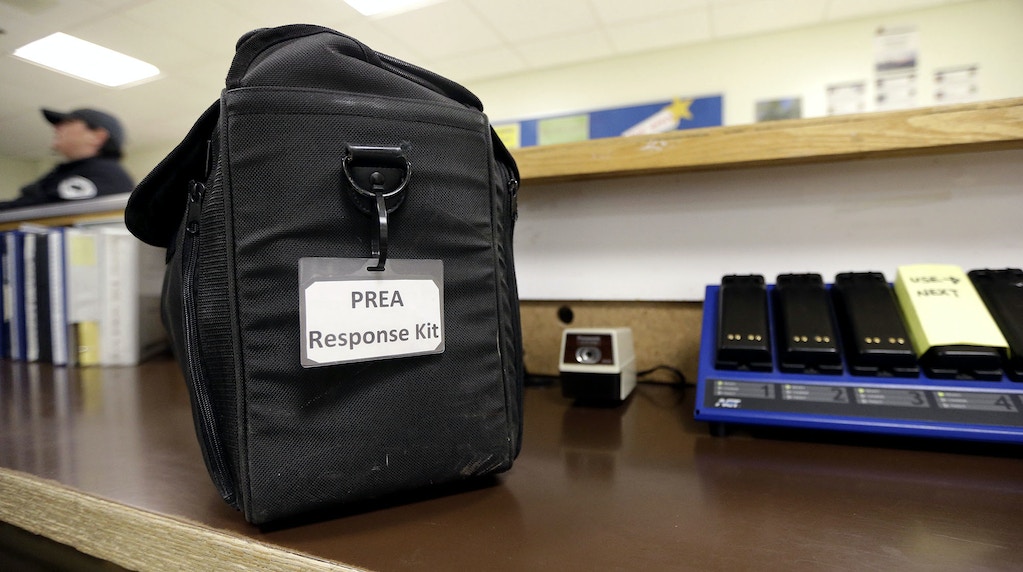 In this photo taken Oct. 17, 2014, a “PREA response kit,” used to gather and preserve evidence in suspected sexual assaults, sits on an office counter at the Washington Corrections Center for Women in Gig Harbor, Wash.

The “Weinstein effect” is provoking crucial discussions about systematic and structural factors that contribute to sexual violence. The need to undo patriarchal hierarchies is clear, but when it comes to addressing the problem in prisons, the oppressive forces are built into the carceral state itself. We might imagine — or try to imagine — a way to produce movies, media, and entertainment free from a system of domination and patriarchal hierarchy. But we might have trouble imagining a system of caging and segregating humans that would not be predicated on structural oppressions. Since the carceral state will not crumble overnight, however, reform is urgently needed.

“There are clear policy solutions that, if adopted, can reduce sexual abuse dramatically. These include setting up safe ways for inmates to report; giving them access to rape crisis services in the community; and teaching staff to treat prisoners with respect (and that there will consequences if they don’t),” Lerner-Kinglake said, noting that JDI believes that good policies could end prison rape. “Fortunately, there is a roadmap for putting these policies in place: the Prison Rape Elimination Act standards.”

PREA was first passed in 2003 but has since had a spotty record of implementation, overseen by a flawed audits. It was only in 2015 that all 50 states officially committed to PREA compliance. The act mandates that detention facilities train staff on prevention, educate incarcerated people about their rights, and provide them with multiple channels for reporting abuse. Under the standards, facilities must screen new arrivals for known risk factors, such as prior victimization, and offer incarcerated people access to community rape crisis services.

“If we want to think about this problem holistically, one way to do it is to reduce the number of people sent to prisons and detention centers in the first place.”

A number of states take PREA commitments seriously. In New York state, the Department of Corrections inspects all its facilities every three years for evidence of sexual assault and meets all national standards under PREA. The same department has since 2015 shown new prisoners orientation videos on how to identify and avoid predators behind bars — a preventative effort that serves as a striking illustration that sexual assault remains a problem that each new inmate must navigate.

Last year, a former prison warden and member of the New York City Board of Correction, Gerard Bryant, publicly stated, “As long as we are going to have prisons, we are going to have sexual abuse in prisons. That’s the reality.” It might be the sort of sentiment that groups like Just Detention International are working tirelessly against; it could promote apathy by presenting a problem as truly intractable. But at the same time, Bryant’s comment offered an inadvertent recognition that the patriarchal, structural oppressions informing prison life are more inherent than incidental. “If we want to think about this problem holistically,” Law noted, “one way to do it is to reduce the number of people sent to prisons and detention centers in the first place.”